Depressive Symptoms After PCB Exposure: Hypotheses for Underlying Pathomechanisms via the Thyroid and Dopamine System

Polychlorinated biphenyls’ (PCB) exposure has been reported to be associated with depressive symptoms, which is correlated to lower dopamine- (DA) and thyroxine-concentrations (T4). T4 is necessary for DA-synthesis and it binds to transthyretin (TTR) being transported into the brain. PCBs can displace T4 by binding to TTR itself, being transported into the brain and disturbing DA-synthesis, where depressive symptoms might occur. Consequently, the free T4-concentration (fT4) increases when PCBs bind to TTR. The interaction of PCBs with fT4 and its associations with the main DA metabolite, homovanillic acid (HVA), and depressive symptoms were investigated. In total, 116 participants (91.6% men) were investigated, who took part in three annual examinations (t1–t3) of the HELPcB health surveillance program. Blood was collected for measuring PCBs, hydroxy PCBs (OH-PCBs), and fT4 and urine for HVA. Depressive Symptoms were assessed with a standardized questionnaire. Interactions were tested cross-sectionally with multiple hierarchical regressions and longitudinally with mixed effect models. Related to HVA, an interaction was cross-sectionally found for lower-chlorinated PCBs (LPCBs) and dioxin-like PCBs (dlPCBs); longitudinally only for LPCBs. Related to depressive symptoms, the interaction was found for LPCBs, dlPCBs, and OH-PCBs; longitudinally again only for LPCBs. The results give first hints that a physiological process involving the thyroid and DA system is responsible for depressive symptoms after PCB exposure.
Keywords: polychlorinated biphenyls; depression; homovanillic acid; free T4, occupational exposure; pathomechanism polychlorinated biphenyls; depression; homovanillic acid; free T4, occupational exposure; pathomechanism

This is an observational study with a three-wave longitudinal within-subjects-design and a time lag of one year between each examination (t1–t3). All participants were examined as part of the long-term HELPcB (Health Effects in high Level exposure to PCB) surveillance program. This program focuses on PCB-exposed workers of a recycling company, surrounding companies and their relatives. Each year, every participant received an invitation letter to a medical examination and an additional reminder of it by phone. Within a predefined timeframe (09:00 a.m.–11:00 a.m.), blood and spot urine samples were collected, a medical interview was conducted, and every participant was screened for mental syndromes during the medical examination in the outpatient clinic of the study center. A detailed description of the HELPcB program including exposure, participant recruitment, and eligibility criteria is illustrated in [2]. As part of the HELPcB program, this study was approved by the Ethics Commission of the Medical Faculty of the RWTH Aachen University (no. EK 176/11).

In total, 300 individuals participated at least once in the HELPcB program and 152 participated on all three measurement occasions. Of these participants, 36 were excluded. Reasons for exclusion were non-participation in the questionnaire due to language problems (n = 3), thyroid-relevant medication (n = 14), antidepressants (n = 12), contraceptives (n = 4), pregnancy (n = 1), and other relevant medication (i.e., hormone therapy or Parkinson medication; n = 2). Altogether, 116 participants were included in the present analyses. Thereof, 106 (91.4%) were males and 10 (8.6%) were females. A statistical description of all used variables can be found in Table 1.

PCBs and their hydroxylated metabolites OH-PCBs were measured in human plasma samples. Schettgen et al. [5,39] and Quinete et al. [38] described in detail the methodologies for the determination of PCBs and OH-PCBs, respectively. Altogether, 18 PCBs were measured: six indicator PCB congeners and twelve dioxin-like PCBs. Furthermore, 19 hydroxy-PCBs (OH-PCBs) were measured. In four dlPCBs (77, 81, 126, and 169) and six OH-PCBs (4-OH-CB3, 4-OH-CB9, 4-OH-CB15, 4-OH-CB18, 3-OH-CB101, and 4-OH-CB130), less than 20% of the participants showed an interpretable value above the limit of detection/quantitation, so they had to be excluded from all analyses. The remaining 14 PCB congeners were summed up into three variables according to their path of exposure and their chemical structure: lower chlorinated PCBs (LPCBs: PCB 28, PCB 52, PCB 101), higher chlorinated PCBs (HPCBs: PCB 138, PCB 153, PCB 180), and dioxin-like PCBs (dlPCBs: PCB 105, PCB 114, PCB 118, PCB 123, PCB 156, PCB 157, PCB 167, PCB 189). Additionally, 13 OH-PCBs were summed up to an OH-PCB sum variable (3-OH-CB28, 4-OH-CB61, 4-OH-CB76, 4-OHCB101, 4-OH-CB107, 4-OH-CB108, 3-OH-CB118, 3-OH-CB138, 4-OH-CB146, 3-OH-CB153, 4-OH-CB172, 3-OH-CB180, and 4-OH-CB187). For OH-PCBs, the sum of the free phenolic forms and the glucuronide and sulfate conjugates were determined by submitting the samples to enzymatic hydrolysis before extraction. Briefly, 100 µL of plasma went through enzymatic hydrolysis to release the target compound from plasma, followed by protein precipitation, and was analyzed by an online solid phase extraction method coupled to liquid chromatography-tandem mass spectrometry (LC-MS/MS) in multiple reaction monitoring mode (MRM) [42]. A detailed description of the OH-PCB detection can be found in the appendix at the end of this document (Appendix B).

Since PCBs are lipophilic, blood levels of lipids were measured to ensure a good interpretability of the results. In the serum, cholesterol and triglycerides were detected and the short formula from the CDC (Centers for Disease Control and Prevention) was used to calculate total lipid levels: total lipids = (2.27 × total cholesterol) + triglycerides + 62.3mg/dL [41]. The total lipids were used to adjust the measured lipophilic PCBs for blood lipid level (ng/g lipid).

Free thyroxine (fT4) was analyzed in the serum via an electrochemiluminiscent immunoassay (ECLIA). First, a 15 µL sample was incubated with a ruthenium complex of marked T4-specific antibodies. After adding biotinylated T4 and the reagent streptavidin-coated microparticles to form an antibody-hapten complex, the free binding sites of the marked antibody were occupied. The resulting complex was bound to the solid phase via the biotin-streptavidin interaction. The reaction mixture was then transferred to the measuring cell, where the microparticles were fixed to the surface of the electrode by magnetic action. Afterwards, the unbound substances were removed with ProCell/ProCell M. The microparticles were then removed from the electrode. By applying a voltage, the chemiluminescence emission was induced and measured with the photomultiplier. The results were determined on the basis of a calibration curve. The laboratory internal reference values were 12–22 pmol/L.

HVA, as the main metabolite of DA, is used as an indicator to map central DA concentration [43,44]. Only 12% of urinary HVA originates from the brain [44], but nevertheless, urinary HVA was used as an indicator for DA because of the non-invasive method and due to the examination design. We collected random urinary samples and urinary HVA concentrations were detected via HPLC high performance liquid chromatography. Jaffe color reaction was used to analyze urinary creatinine concentrations and values are expressed as the ratio of HVA to creatinine (HVA/Crea; in µmol/g creatinine) in order to adjust the measurement for individual urine density [45].

In order to detect depressive symptoms, we used the German version of the patient health questionnaire (PHQ-D) [46]. The PHQ-D is a multiple-choice self-report inventory and consists of nine items scoring for the DSM-related criteria of depression. “Little interest or pleasure in doing things” or “Feeling tired or having little energy” are two sample items. The participants were asked how often they felt bothered by the considered depressive symptoms in the last two weeks (0 = ”not at all” until 3 = “nearly every day”). A sum scale was built with a possible range from zero to 27. The final scale had a good standardized Cronbach’s alpha in all cross-sections: t1: 0.88, t2: 0.90, t3: 0.91.

First, to identify important confounding variables, a directed acyclic graph was generated [47] with the online tool DAGitty v3.0 [48] (see Appendix A). The minimal sufficient adjustment set consists of age, weight, and albumin. Age is associated with PCB body burden, because of the long half-life of PCBs. Age is also associated with the concentration of HVA and depression [13]. Weight is associated with HVA [44] and changes in thyroid hormone concentration can affect it [49]. Albumin was added as a control variable, because it is a marker for liver function [50]. Liver function has an effect on the concentration of fT4 and HVA as these are metabolized in the liver. Finally, it was controlled for gender, because women have a higher prevalence of depression [51] and a lower concentration of PCB body burden, since they are not directly exposed in their job [52]. Gender was also controlled for the analyses with OH-PCBs, because the OH-PCB body burden is caused by the metabolism of PCBs and LPCBs, which are typical for job exposure and have a shorter half-life than HPCBs.
Both interaction hypotheses were tested in two steps. First, the postulated interactions for the individual cross-sections were considered separately. Then, a mixed effect model was calculated in which the cross-section was included as a random effect. Following this procedure made it possible to a) control and investigate the influence of time, b) to test whether the interactions are stable over the three years, and c) to account for the problem of multiple testing. SPSS 25 for Windows [53] and SPSS macro PROCESS [54] were used to calculate the separate interactions for the respective cross-sections. For the analysis of the mixed effect models, the statistic program R version 3.4.3 [55] and RStudio version 1.1.383 [56] with the package “lmerTest” [57] were used. The lipid adjusted PCB and sum variables and the OH-PCB sum variable were naturally log transformed to reach a normal distribution of the residuals for regression analyses. Further, all variables were z-standardized to get standardized beta-coefficients in the outputs. To visualize the interactions of the mixed effect models, the R package “lattice” was used [58]. According to Baron and Kenny [59], no direct effect between the predictor and the mediator is necessary to test an interaction hypothesis. Nevertheless, we provide the direct associations between several PCB congeners, as well as OH-PCBs, and fT4 in Table 2. All hypotheses were tested one-sided, since they were directed hypotheses. The level of significance for one-sided testing was set to a p-value lower than 0.05.

The described results in this study are not clear enough to support a mechanism via blocked thyroid transporter TTR to explain depression after PCB exposure. However, the results give first hints for a physiological mechanism via disturbed thyroid and DA system to explain the positive correlation between PCB body burden and depressive symptoms. We found an interaction effect predominantly between LPCB exposure and fT4 related to the main DA metabolite HVA, as well as related to depressive symptoms. Human exposure to LPCBs occurs predominantly in an occupational setting and via inhalation in contaminated buildings. This study gives first hints for an underlying pathomechanism that may explain the association of occupational and inhalative PCB exposure and depressive symptoms. The findings show that a physiological process involving the DA and thyroid system may be responsible for depressive symptoms after PCB exposure. Nevertheless, more research is necessary to support these findings.

This research was funded by the Institution for Statutory Accident Insurance and Prevention in the Energy, Textile, Electrical, and Media Industry (BGETEM), Cologne, Germany, grant number 360328. The APC was funded by the study center. 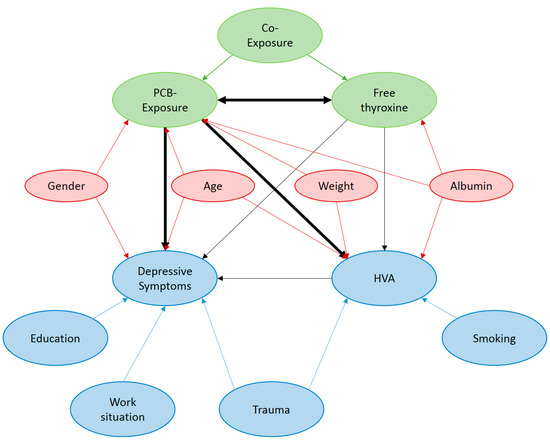 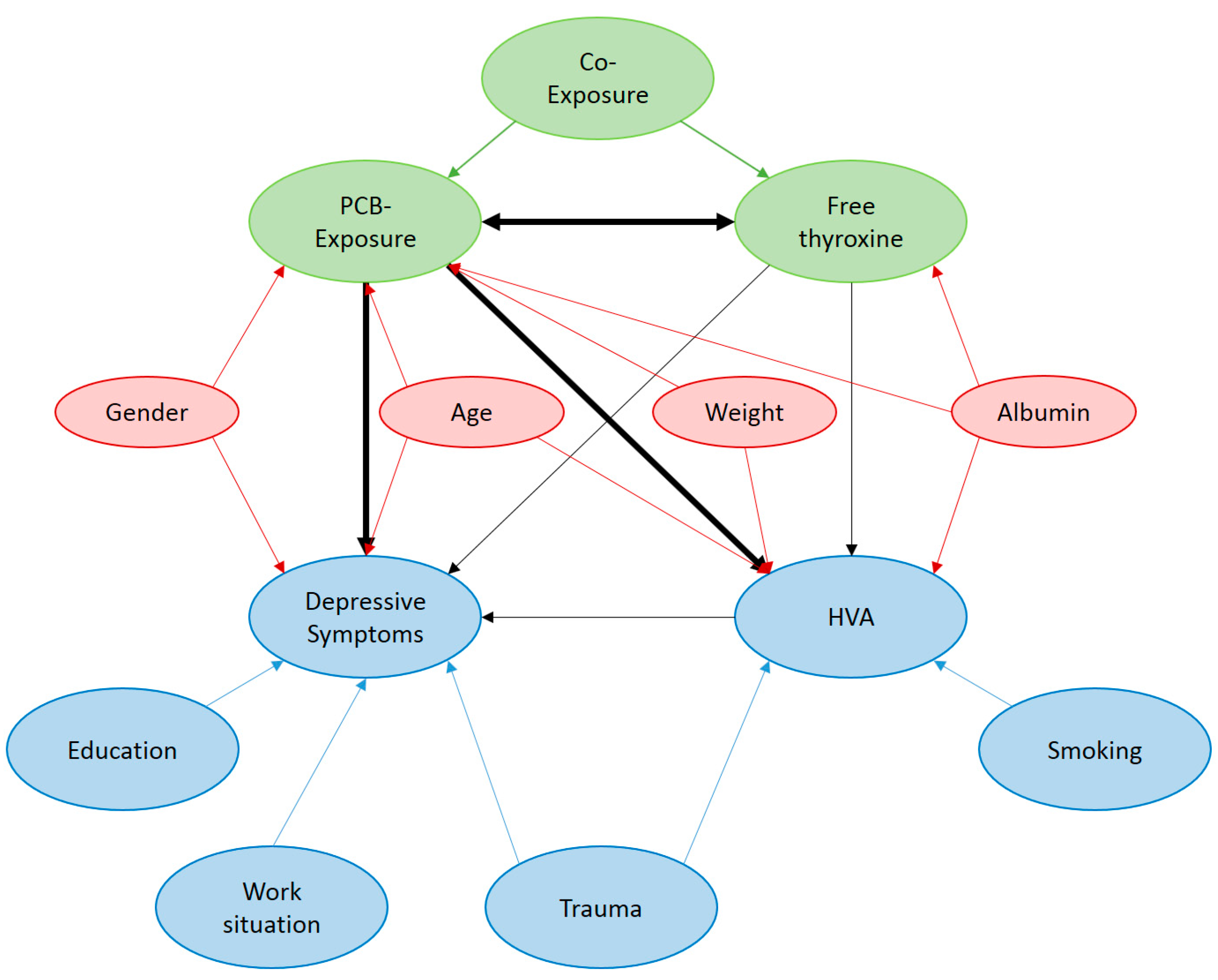 More detailed description of the detection of hydroxlated PCBs: 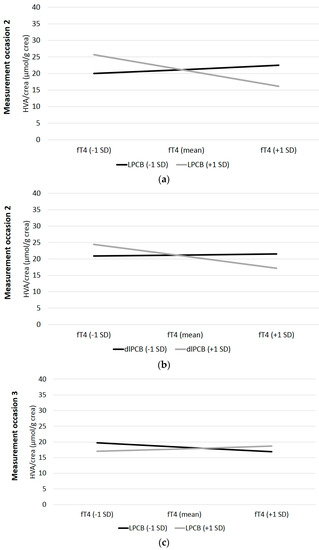 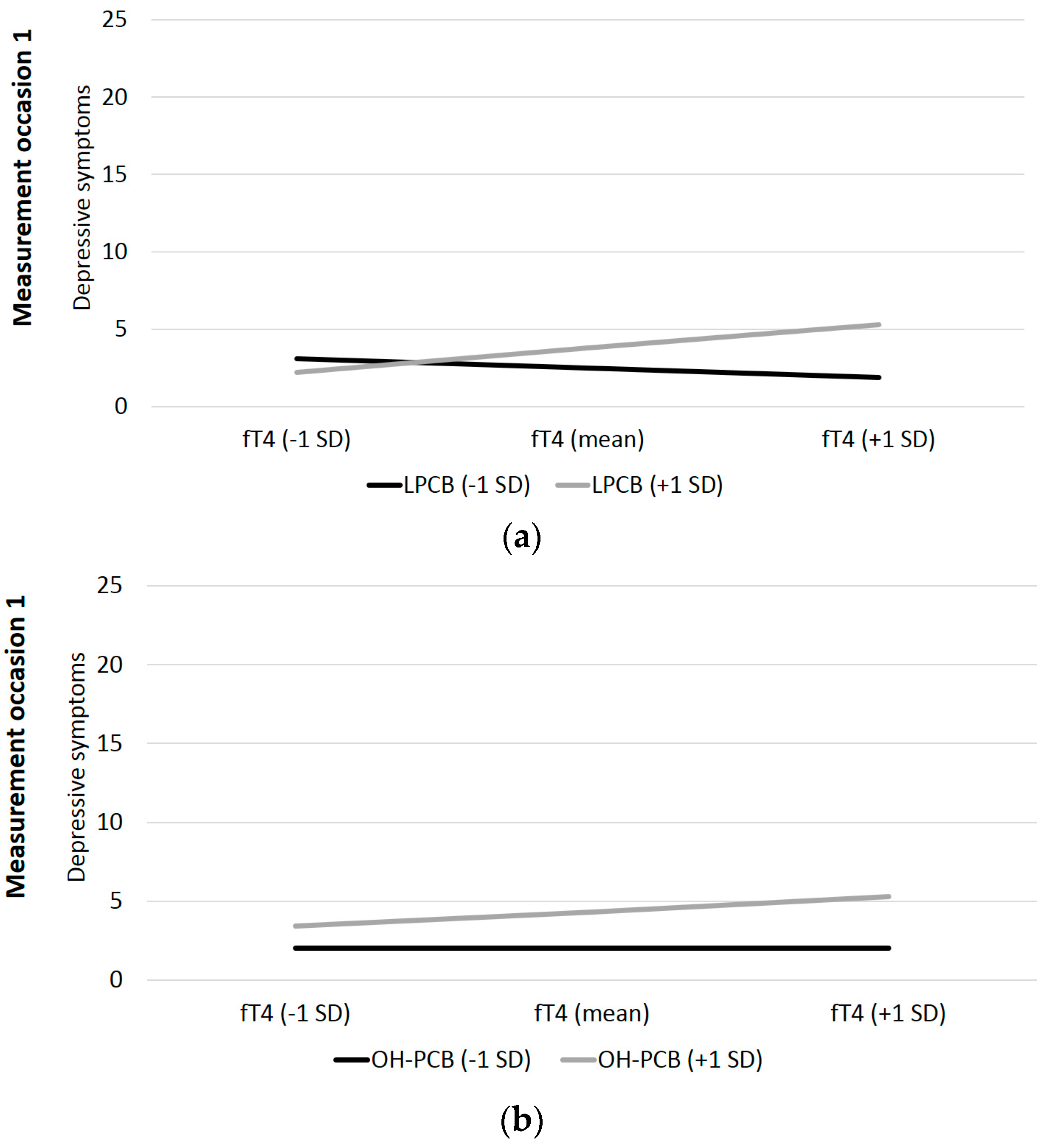