:
This study examined to what extent e-cigarette users noticed the European Union’s new legislation regarding e-cigarettes, and whether this may have influenced perceptions regarding addictiveness and toxicity. Data were obtained from yearly surveys (2015–2017) of the International Tobacco Control (ITC) Netherlands Survey. Descriptive statistics and Generalized Estimating Equations were applied. About a third of the e-cigarette users noticed the text warning (28%) and the leaflet (32%). When compared to tobacco-only smokers, e-cigarette users showed greater increases in perceptions regarding addictiveness (β = 0.457, p = 0.045 vs. β = 0.135, p < 0.001) and toxicity (β = 0.246, p = 0.055 vs. β = 0.071, p = 0.010). In conclusion, the new legislation’s noticeability should be increased.
Keywords:
electronic cigarette; health warnings; noticing

Electronic cigarettes (e-cigarettes) are increasingly used in the Netherlands, with a prevalence of 3.5% in 2016 [1], while smoking prevalence was 22% in 2018 [2], with around 16% of Dutch smokers regularly using e-cigarettes (dual-users) [3]. Although e-cigarettes may have better short- and midterm health-risk profiles than regular cigarettes [4], they contain toxins [5], their long-term safety profile is unknown [4], and they are addictive when containing nicotine. It has been argued that e-cigarette users should be well-informed about this [6]. As of May 2016, in the European Union (EU), the new Tobacco Products Directive required that both the unit and outside packet of e-cigarette products with nicotine must include a text warning on at least 30% of the two largest surfaces, stating that nicotine is addictive (Figure 1). All e-cigarette packets now also have to include a leaflet with information about, amongst other things, the addictiveness and toxicity of e-cigarettes (Figure 2 and Figure 3). This new legislation had to be fully implemented as of May 2017 [7].
Previous studies found that 28% of dual-users from six EU countries reported having noticed the leaflet [8], while around 16% of dual-users from the United Kingdom noticed the text warning [9]. The current study is the first to examine whether dual-users’ perceptions regarding the addictiveness and toxicity of e-cigarettes changed after implementing the EU’s new legislation.
In sum, this study aims to answer the following research questions: (1) To what extent did Dutch e-cigarette users notice the EU’s new e-cigarette legislation? (2) Did e-cigarette users have different perceptions regarding the addictiveness and toxicity of e-cigarettes after implementing the EU’s new legislation than before its implementation?

Longitudinal data were used from the International Tobacco Control (ITC) Netherlands Survey Waves 9 (2015), 10 (2016), and 11 (2017), with all online surveys being conducted between November and December. The ITC Netherlands Surveys received ethics clearance from the University of Waterloo’s Office of Research Ethics (ORE # 18920). The ITC Project’s methodology has been described previously [10]. Respondents were selected from a probability-based web database to reach a sample representative of Dutch smokers aged 15 years and older [11]. Tailored replenishment samples and sampling weights were used to compensate for attrition effects [12]. Respondents were classified as smokers if they had smoked at least 100 cigarettes in their lifetime and if they currently smoked at least once a month [13]. Smokers and ex-smokers who had ever heard of e-cigarettes were included. Respondents who reported using e-cigarettes at least monthly were categorized as “e-cigarette users”. The control group included tobacco-only smokers. The number of included respondents was n = 1146 in 2015 (of which n = 108 e-cigarette users), n = 1151 in 2016 (of which n = 123 e-cigarette users), and n = 1124 in 2017 (of which n = 130 e-cigarette users). Five-hundred and thirty-six (of which n = 58 e-cigarette users) respondents participated in all three Survey Waves.

SPSS 24.0 was used to analyze the data. All statistical estimates and tests were weighted for gender and age to increase sample representativeness [10]. To examine to what extent Dutch e-cigarette users noticed the EU’s new legislation, descriptive statistics were used. Generalized Estimating Equations (GEE) [14] were performed to estimate whether e-cigarette users had different perceptions regarding the addictiveness and toxicity after implementing the new legislation than before its implementation. Tobacco-only smokers were used as a control group for the e-cigarette users by adding interactions between Survey Wave and e-cigarette status; e-cigarette users vs. tobacco-only smoker. The control group is not expected to be exposed to the new e-cigarette legislation. For the GEE analyses, only respondents who participated in all three Survey Waves were included (n = 536). The binominal distribution and the logit link were used for the dichotomous variables, while the normal distribution and the identity link were used for the continuous variables [15]. The GEE were adjusted for age, gender, educational level, level of nicotine addiction [16], ever having made a quit attempt, quit intention, the number of participations in the cohort [17], and e-cigarette status (except when interactions were applied).

The new e-cigarette text warning and leaflet may not be effective tools to inform e-cigarette users about the addictiveness and toxicity of e-cigarettes. Therefore, future research should examine how to make the EU’s new legislation for e-cigarettes more effective.

The authors gratefully acknowledge the assistance of several members of the ITC Project team at the University of Waterloo, in particular Thomas Agar and Anne C.K. Quah. 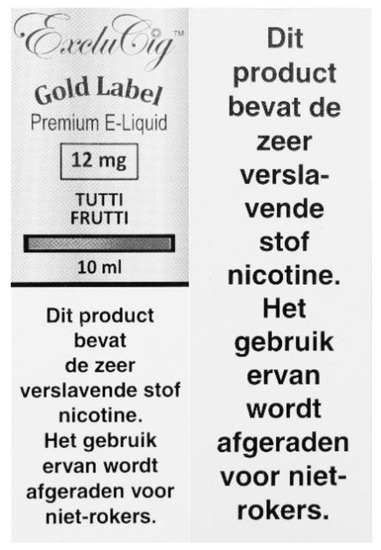 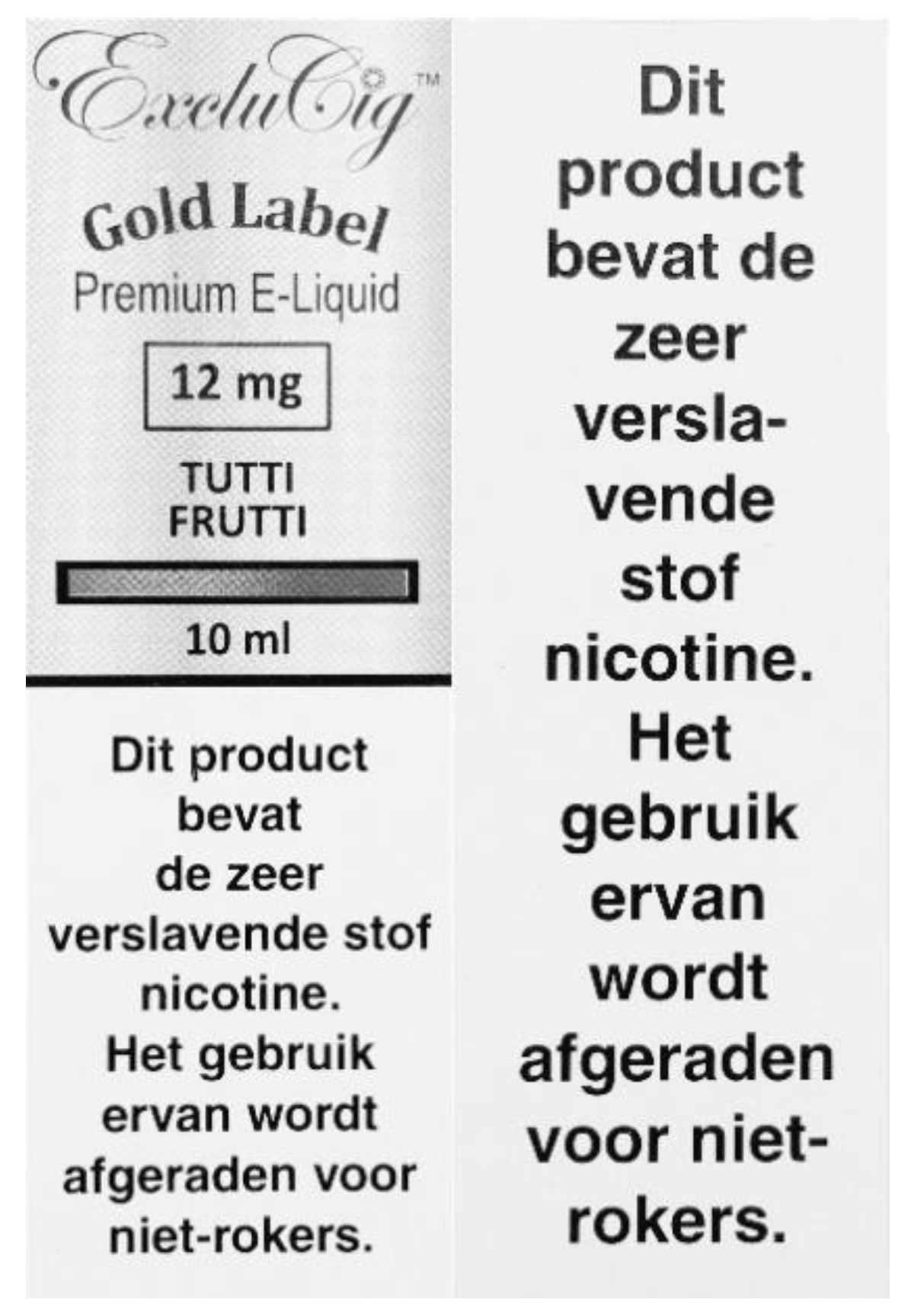 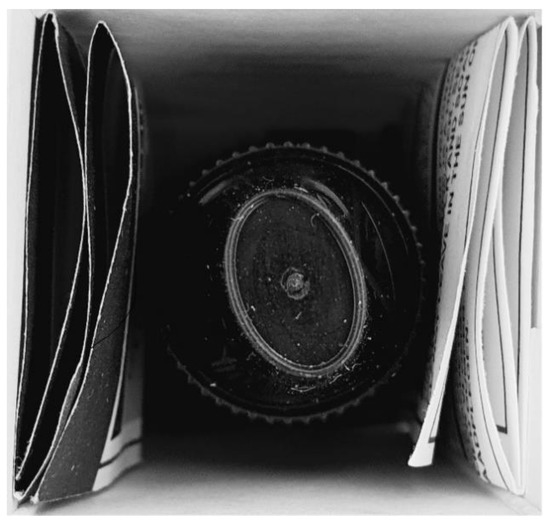 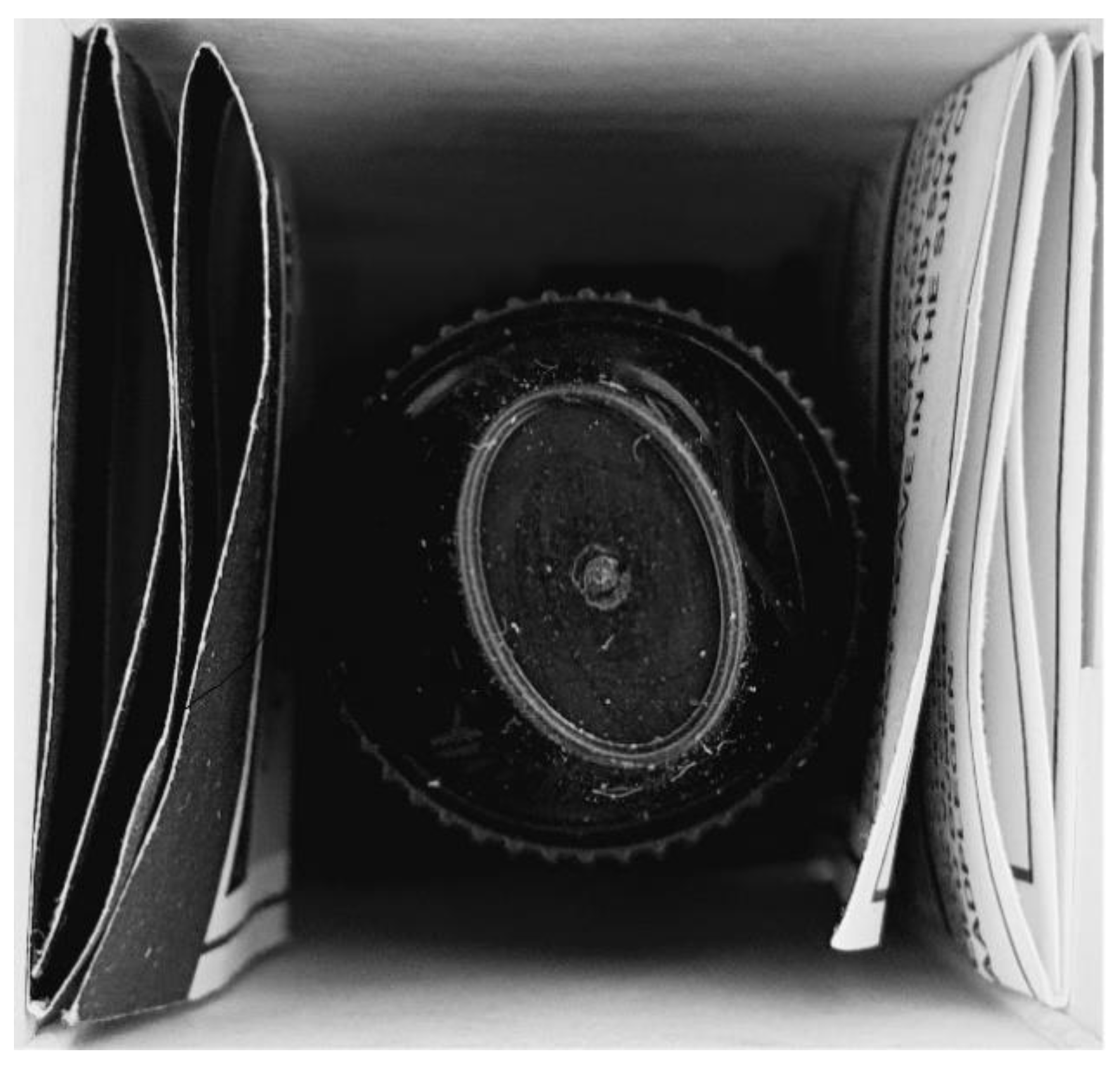 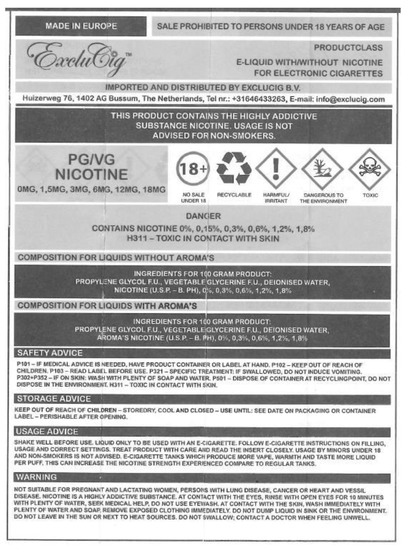