Minireview: The Epigenetic Modulation of KISS1 in Reproduction and Cancer

Disruption of epigenetic regulation by environmental toxins is an emerging area of focus for understanding the latter’s impact on human health. Polybrominated diphenyl ethers (PBDEs), one such group of toxins, are an environmentally pervasive class of brominated flame retardants that have been extensively used as coatings on a wide range of consumer products. Their environmental stability, propensity for bioaccumulation, and known links to adverse health effects have evoked extensive research to characterize underlying biological mechanisms of toxicity. Of particular concern is the growing body of evidence correlating human exposure levels to behavioral deficits related to neurodevelopmental disorders. The developing nervous system is particularly sensitive to influence by environmental signals, including dysregulation by toxins. Several major modes of actions have been identified, but a clear understanding of how observed effects relate to negative impacts on human health has not been established. Here, we review the current body of evidence for PBDE-induced epigenetic disruptions, including DNA methylation, chromatin dynamics, and non-coding RNA expression while discussing the potential relationship between PBDEs and neurodevelopmental disorders. View Full-Text
Keywords: polybrominated diphenyl ethers (PBDE); neurodevelopment; epigenetics; DNA methylation; chromatin remodeling; environmental toxins; toxicity polybrominated diphenyl ethers (PBDE); neurodevelopment; epigenetics; DNA methylation; chromatin remodeling; environmental toxins; toxicity
►▼ Show Figures 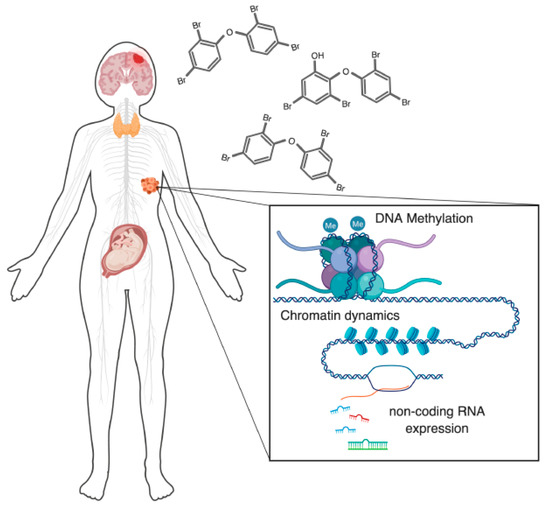