Who Has Higher Willingness to Pay for Occupational Safety and Health?—Views from Groups with Different Public Identities and Differences in Attention
Previous Article in Special Issue

Does a Classroom Standing Desk Intervention Modify Standing and Sitting Behaviour and Musculoskeletal Symptoms during School Time and Physical Activity during Waking Time?

The Australian Physical Activity and Sedentary Behaviour Guidelines for children aged 5 to 12 years (2017) recommend that children should move more and sit less, and to limit their screen time to a maximum of two hours daily [1]. However, a large proportion of children fail to meet this recommendation [2,3]. Many still spend a large proportion of the day being sedentary [4,5]. Modifying sedentary behaviours in children is important as activity and behavioural patterns formed during childhood can follow through to adolescence and adulthood [6,7].
High levels of sedentary time may lead to negative health effects in children. Sedentary behaviour, defined as “any waking behaviour characterised by an energy expenditure ≤ 1.5 metabolic equivalents, while in a sitting, reclining or lying posture” [8], may increase the risk of cardiometabolic disease, such as hypertension and diabetes, in children [5,9,10]. The risk of childhood obesity increases in a dose-response manner as sedentary levels rise [5,11,12]. Excessive screen time (often used as a proxy for sedentary time in children) is also associated with depressive symptoms whereas reduced screen time and increased physical activity levels are linked to emotional stability, higher cognitive function and higher self-esteem in children [5,12,13].
Greater sedentary time is associated with a higher prevalence of musculoskeletal pain/discomfort amongst children and adolescents [14,15,16]. The excessive use of tablets and computers can lead to increases in sedentary time and undesirable postures from a young age [15,16,17]. Consequently, a higher prevalence of musculoskeletal discomfort, such as neck or back pain, have been found in children [14,15,17]. Musculoskeletal discomfort developed during childhood may progress to become chronic musculoskeletal pain syndromes in adulthood [18].
Schools have great potential to positively influence children’s physical activity and health behaviours [19,20]. There have been a number of school-based interventions aimed at increasing physical activity in students such as integrating physical activity into the delivery of academic material [21,22] and the implementation of activity breaks [23]. These approaches have been effective at improving physical activity in children [24]. However, children spend many hours sitting at desks during school hours [19,20]. Due to time constraints, budget cuts and a growing focus on standardised teaching and academic achievement, physical activity levels in schools have declined over recent years [25,26,27]. Increasing sedentary time and decreasing physical activity may hinder the very academic success that schools strive to attain [28,29]. As such, it is important not to compromise on time spent on the academic curriculum when implementing physical activity interventions in schools [27].
Replacing traditional seated desks and chairs in classrooms with standing desks could potentially reduce sedentary time and increase standing time and light activity. In a recent review, it was found that standing desks in classrooms can increase standing time by 24–40 min per school day and decrease sitting time by 59–64 min per day [30]. However, only a few studies have explored the effects of standing desks on musculoskeletal discomfort in children and results from these studies were inconsistent [31,32]. Given that research that has examined the association of occupational standing with musculoskeletal symptoms in adults has found that prolonged standing in adults is associated with the development of low back pain [33], it is important to examine the relationship between standing and musculoskeletal symptoms in children. If standing desks prove to be effective in increasing standing time and decreasing sitting time in children, while not causing excessive musculoskeletal discomfort, schools would have more reasons to implement these desks in classrooms. This could lead to significant positive changes in the long-term health of children.
In addition, most of the studies investigating the effects of standing desks in classrooms have only measured sedentary time and physical activity outcomes during school hours, rather than over the whole day. It is important to analyse children’s sedentary time and physical activity throughout the whole day, as school only takes up a portion of the day, and changing children’s behaviour in school may have consequences in non-school hours.
The purpose of this study was to determine the short-term effects of a standing desk intervention in a classroom on students’ (a) standing and sitting time during school hours; (b) physical activity and sedentary time during all waking hours; and (c) musculoskeletal discomfort.

This study was a within-subjects crossover trial, whereby each participant acted as his own control. The school funded the purchase of standing desks (AlphaBetter® Adjustable-Height Stand-Up Desk, SAFCO Products Australia® at a cost of $750 AUS/desk) for half a classroom. The standing desks used in this study had adjustable heights and “fidget bars”. Fidget bars allowed students to swing their non-supporting leg while standing. In both 2016 and 2017, the class was divided into two groups—one group used the standing desks while the other group used the traditional seated desks. After 21 school days (three rotations of the school’s seven-day timetable), the students changed desks. Students who had used the traditional seated desks previously started using the standing desks and vice versa. Students remained in this condition for a further 21 school days. Hip and thigh accelerometer data, and musculoskeletal discomfort ratings were collected on the last seven days of each 21-school-day period.
The study was approved by the Human Research Ethics Committee at Curtin University (Approval number: RDHS-157-16).

Participants were a convenience sample of male students from two Grade 4 classes at an all-boys private school in Perth, Western Australia. Data from each class were collected at separate time periods during 2016 and 2017. All children in the classes were invited to participate. Exclusion criteria were physical health problems that precluded standing for extended periods of time, or inability to wear accelerometers around their hips and thighs.

ActiGraph GT9X Link accelerometers (Actigraph LLC, Pensacola, FL, USA) were used to measure participants’ standing and sitting time during school hours, and sedentary time and physical activity levels during waking hours. Each participant wore two accelerometers—one on the thigh and one on the hip. Data were collected at 30 Hz, and then converted to counts per 15 s epochs for analysis. Short epochs allow for the recording of brief sporadic bursts of high-intensity activities, which are commonly observed in children [34].
The thigh-worn accelerometer was used to estimate time in standing and sitting during the participants’ school hours. When mounted on the thigh, the Actigraph inclinometer function has been found to be a valid and reliable method of assessing standing and sitting postures [35,36]. The thigh-worn accelerometers were attached upon arrival at school and removed just prior to the participants leaving school at the end of the school day. Non-wear time was detected by visual examination of the inclinometer data.
Hip-worn accelerometers measured participants’ physical activity and sedentary time, during all waking hours. To date, the validity of the ActiGraph GT9X Link accelerometers to determine physical activity intensities has not been determined in children. However, ActiGraph GT3X+ accelerometers (ActiGraph LLC, Pensacola, FL, USA), which use the same software and hardware as the ActiGraph GT9X Link accelerometers, have been shown to be valid devices in assessing physical activity and sedentary behaviour intensity in children and youth [37,38]. The hip-worn accelerometers were held in place by a belt for seven days (24 h/day), except during showers/baths and water-based activities like swimming.
Waking wear time from the hip-worn accelerometers was determined by visual inspection of the ActiGraph files by a trained rater and a customised algorithm (SAS Version 9.3, SAS Institute, Cary, NC, USA) [39]. Waking wear data were processed using ActiLife version 6 (ActiLife software; Pensacola, FL, USA) using Evenson’s accelerometer cut-points for children [40] to estimate the amount of time spent during waking hours in different levels of physical activity intensity (light, moderate and vigorous) and sedentary time. Accelerometry data for a participant was included in the study if there was a minimum wear time of ten hours/day for at least one day [41].

Participants completed a modified version of the Nordic Musculoskeletal Questionnaire [42] twice daily. One assessment was completed in the early part of the school day and the other in the later part of the school day. This assessment of musculoskeletal discomfort has been used extensively in studies involving children [32,43]. The Nordic Musculoskeletal Questionnaire comprises a body map with nine labelled body parts and a numeric intensity rating scale from zero to ten [44]. Participants rated discomfort levels felt at the following body parts—neck, shoulders, elbows, wrists/hands, upper back, lower back, hips/thighs, knees and ankles/feet [42].

Linear mixed models were used to examine the differences in the average standing and sitting times (at school) and the average times spent sedentary and in various physical activity intensities per day (waking hours) between the standing desk and seated desk conditions. These models included all valid observed data and were adjusted for the number of minutes the accelerometers were worn.
Musculoskeletal discomfort ratings at each body part were zero-skewed and, after transforming to a zero to one scale, compared between the standing desk and seated desk conditions using zero-inflated regression models, clustering on participant to account for inter-dependence between individual participant’s repeated measures. Model results were summarised using regression coefficients, predicted marginal means and their 95% confidence intervals (CI). Because discomfort frequencies greater than 0 were very low, discomfort ratings were also recoded to “presence of discomfort” (>0) and “absence of discomfort” (= 0). The effect of using a standing desk compared to a seated desk on the likelihood of discomfort was evaluated using logistic regression models with model results summarised using odds ratios (OR) and their 95% CI. All p-values were two-sided, and p-values < 0.05 were considered statistically significant. Stata/IC v15.0 (StataCorp, College Station, TX, USA) was used to analyse the data.

A convenience sample of 48 Grade 4 male students, aged ten to 11 years were asked to participate in this study over 2016–17. One student declined to participate so a total of 47 students participated in the study. None of the participants reported injuries or physical health conditions at the time of enrolment.

Children spent approximately 68% of their day sedentary behaviour, 26% in light activity and around 6% of the waking day being moderately or vigorously active. There were no significant differences in the time the participants spent engaged in sedentary behaviour, light activity, moderate activity or vigorous activity during waking time, regardless of desk type used (p > 0.05) (Table 1). 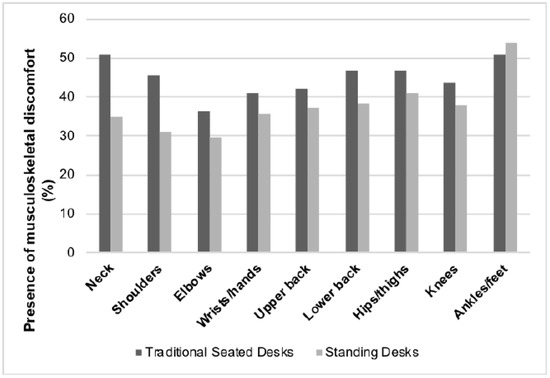 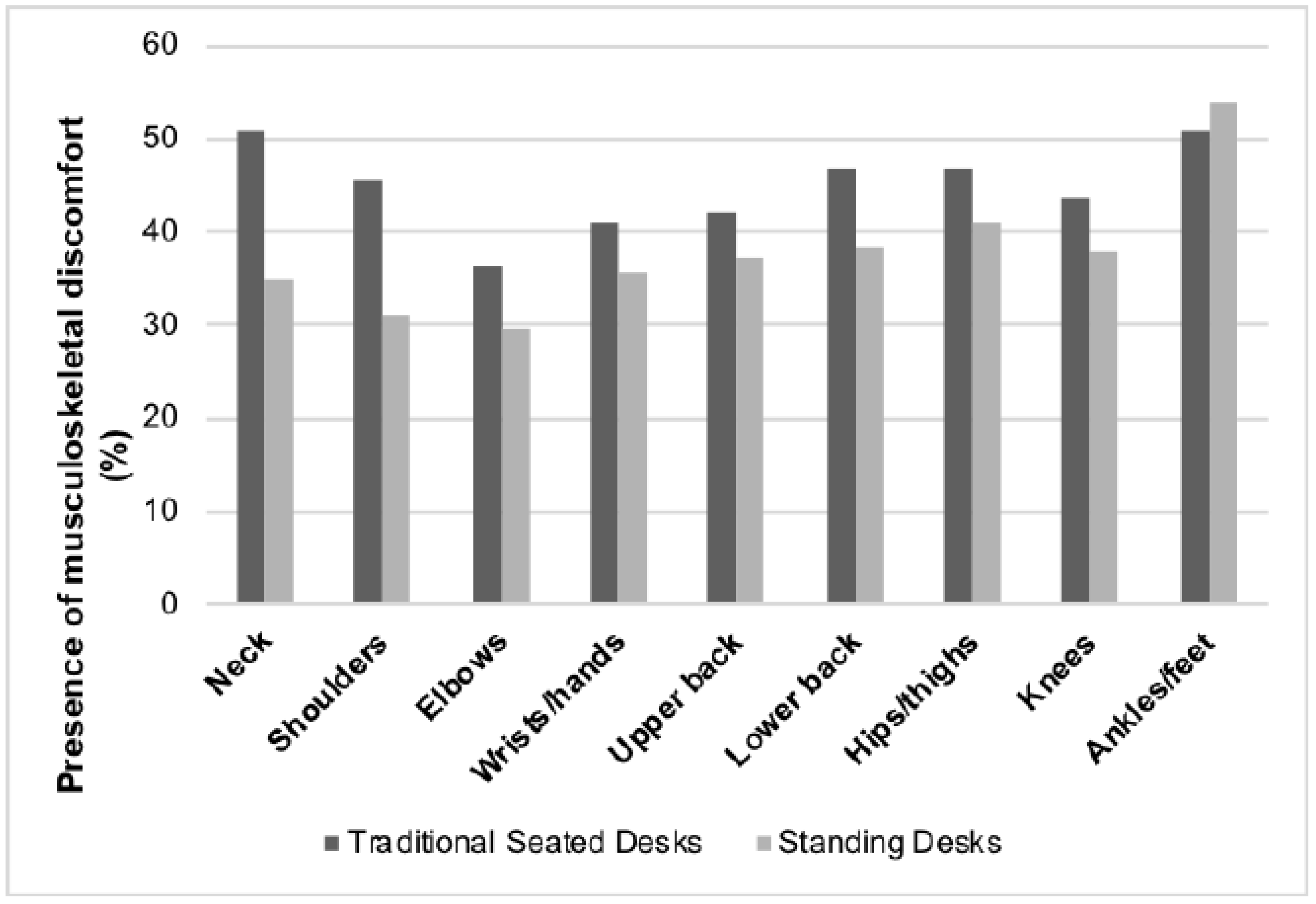