The Problem with Low-Prevalence of Bullying

Bullying can be defined as physical or verbal aggression that is intentional and repeated. In addition, it involves unequal power between the bully and the bullied and causes distress for the latter [1]. The victims of bullying often suffer a wide range of negative consequences, such as psychological stress [2], psychosomatic illness [3], poor physical health [4], severe depression, suicide ideation [5], poorer psychosocial adjustment [6], substance abuse [7], and social isolation [8] that may persist into adulthood [9]. Bullying in school affects academic achievement, prosocial skills and psychological well-being for both victims and bullies [10,11,12].
Studies have shown that being a victim of bullying significantly reduces the life satisfaction of adolescent students [13,14,15]. Studies have shown that life satisfaction is a key mental health variable during adolescence and an important indicator of individual psychological development [16,17,18]. Furthermore, changes in life satisfaction have been shown to precede changes in psychological health and functioning [19]. Life satisfaction as measured by Cantril’s [20] ladder from the worst possible life to the best possible life is an efficient, global measure with high construct validity across diverse socio-demographic factors such as age, gender, height, income, marital status, employment and religion e.g., [21,22,23]. This measure continues to be routinely used as a measure of quality of life in diverse studies of health-related outcomes e.g., [21,24]. Studies in several countries have demonstrated that Cantril’s [20] measure of life satisfaction is associated with various health behaviours among children, including binge drinking in Wales [25], addictive behaviours in the Netherlands [26], food poverty in Ireland [27], and lack of physical activity and screen-based media use in Canada and the United States [28]. The increasing emphasis on positive psychology has boosted its application. Although the measurements of life satisfaction and psychopathology are related, they are conceptually different. The former defines mental health more in the spirit of positive psychology—as something more than just the absence of pathological symptoms [13].
Studies have firmly established that the prevalence of bully victimization varies significantly by gender [29,30], age [31], race [32], sexual orientation [33], disability [34], family structure [35], family affluence [36] and other factors. Furthermore, the prevalence of victimization varies dramatically between countries [36]. For example, the difference in prevalence of 11-year old children that have been bullied in Lithuania and Armenia is tenfold—30% vs. 3%.
Due et al.’s [3] international comparison study found bully victimization to be associated with psychological symptoms for adolescents in 28 countries in Europe and North America. However, it found that average levels of bullying did not explain between-country differences in symptom prevalence, i.e., high prevalence of bullying did not necessarily result in high prevalence of psychological symptoms.
Nevertheless, the school- and country-level prevalence of bullying may moderate the effects of bullying on individuals’ well-being. A study by Brickman and Bulman [37] was the first to show that individuals who are experiencing difficulties in their lives, become more stressed when they compare themselves with others who are doing well. On the other hand, people may find it encouraging when they come across others who are facing similar or even worse problems than they are. The latter comparison might put ones’ own situation in perspective [38]. In the context of the current study, we could argue that the social comparison of bully victims may be more favourable in classes and schools where they see that they are not alone in having to deal with this problem. Similarly, if bullying is infrequent, you may well be the only kid in your class that is a victim. This might also apply on a country-level and thus give a different perspective on Due et al.’s [3] international comparison.
Social comparison, i.e., comparing oneself, one’s status or one’s situation with that of others, is deeply ingrained in the human psyche. We frequently engage in this process to obtain information about ourselves, and usually do so without conscious effort or intention. It has been argued that significant life events may cause changes in the nature and amount of social comparison of an individual. The need to know how one is doing is also likely to increase during stressful times [38]. The turbulence of adolescence combined with the agony of bully victimization is certainly going to increase stress levels and preoccupation with social cues.
The hypothesis put forth in the current paper is that being the victim of bullying in an environment where bullying is rare, is more detrimental to ones’ life satisfaction than if victimization is more prevalent. The conceptual framework of social comparison also predicts that being bullied in an environment where many other students are also experiencing it, may provide emotional, physical and intellectual consolation for victims. In this sense, bullying may become a greater problem for individual students as it becomes less of a problem for schools and society in general.

Our hypothesis, that being the victim of bullying in an environment where bullying is rare is more detrimental to ones’ life satisfaction than if victimization is more prevalent, is supported by the analysis. Our results may explain the lack of association in between-country differences in bully victimization and symptom prevalence as described by Due et al. [3]. The results indicate that when bullying takes place in an environment where it is otherwise infrequent, it can exacerbate the victim’s negative feelings as a result. In other words, it is worse being bullied when you are one of a few victims than when bullying is relatively commonplace. Being the only one bullied in your class is therefore likely to cause much more harm to your life satisfaction than, for example, if it also happens to a third of your classmates.
Adolescents report their life satisfaction in accordance with their own standards [18], which they will set by comparing themselves to their peers. According to the multiple discrepancy theory of satisfaction [45], individuals are constantly comparing themselves to certain standards, including people in their environment. Amongst other things, people base satisfaction judgments on discrepancies between their own situation and the situation of those around them, where negative comparison will lead to negative satisfaction. Applying his theory Michalos [46] found for example that college students’ perception of how their health status compared with their peers was the strongest predictor of their overall satisfaction with their own health. It is reasonable to suggest that similar social comparison mechanism is at least partly responsible for the results we see in the current study.
Peer relationships matter very much to adolescents. This, coupled with the fact that this is on average the loneliest time of a person’s life [47], makes social isolation a key mental health issue for this age group. Adolescents worry excessively about their status within their peer group and are therefore constantly comparing themselves to others. Experiencing that you are the only one being victimized will naturally compound the effects of the bullying per se.

In summary, we have identified prevalence of bullying in the students’ surroundings as a mediating variable explaining the relationship between bully victimization and life satisfaction. These results are a stern reminder that although it is possible to achieve great results in reducing the numbers of bullied adolescents through prevention and intervention, it is very important to stay focused on the problem even though fewer victims are involved. The problem of infrequent bullying is that favourable percentages may conceal real suffering.

The study is supported by a grant from the University of Akureyri Research Fund.

The authors declare no conflict of interest. The study sponsors had no say in the study design, the collection, analysis, and interpretation of data, the writing of the report, or the decision to submit the manuscript for publication. 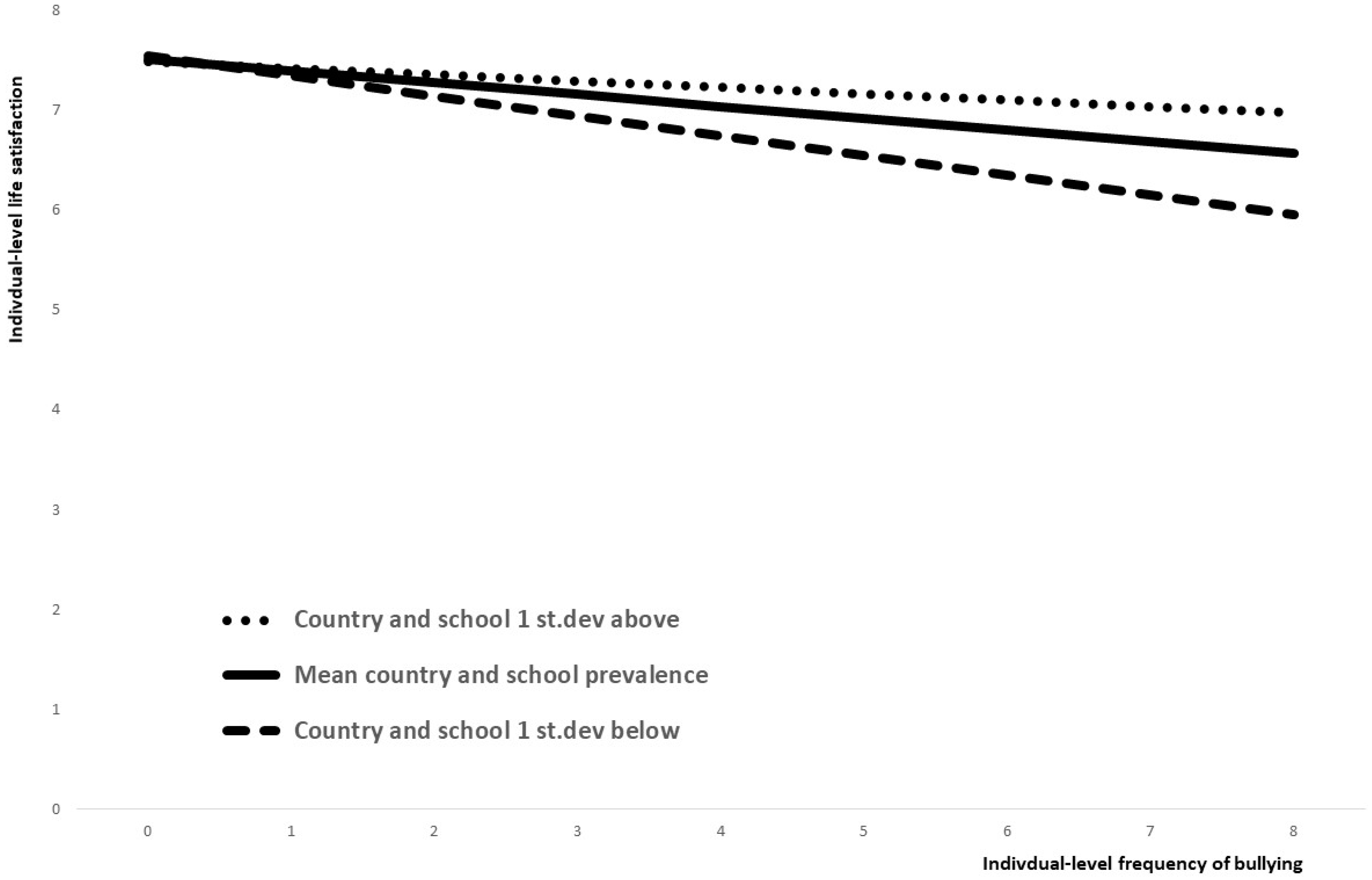