Wetlands and Malaria in the Amazon: Guidelines for the Use of Synthetic Aperture Radar Remote-Sensing

A Meta-Regression Analysis of the Effectiveness of Mosquito Nets for Malaria Control: The Value of Long-Lasting Insecticide Nets

Long-lasting insecticidal nets (LLINs) have been widely used as an effective alternative to conventional insecticide-treated nets (ITNs) for over a decade. Due to the growing number of field trials and interventions reporting the effectiveness of LLINs in controlling malaria, there is a need to systematically review the literature on LLINs and ITNs to examine the relative effectiveness and characteristics of both insecticide nettings. A systematic review of over 2000 scholarly articles published since the year 2000 was conducted. The odds ratios (ORs) of insecticidal net effectiveness in reducing malaria were recorded. The final dataset included 26 articles for meta-regression analysis, with a sample size of 154 subgroup observations. While there is substantial heterogeneity in study characteristics and effect size, we found that the overall OR for reducing malaria by LLIN use was 0.44 (95% CI = 0.41–0.48, p < 0.01) indicating a risk reduction of 56%, while ITNs were slightly less effective with an OR of 0.59 (95% CI = 0.57–0.61, p <0.01). A meta-regression model confirms that LLINs are significantly more effective than ITNs in the prevention of malaria, when controlling for other covariates. For both types of nets, protective efficacy was greater in high transmission areas when nets were used for an extended period. However, cross-sectional studies may overestimate the effect of the nets. The results surprisingly suggest that nets are less effective in protecting children under the age of five, which may be due to differences in child behavior or inadequate coverage. Compared to a previous meta-analysis, insecticide-treated nets appear to have improved their efficacy despite the risks of insecticide resistance. These findings have practical implications for policymakers seeking effective malaria control strategies. View Full-Text
Keywords: malaria; mosquito nets; long-lasting insecticidal nets (LLINs); meta-regression malaria; mosquito nets; long-lasting insecticidal nets (LLINs); meta-regression
►▼ Show Figures 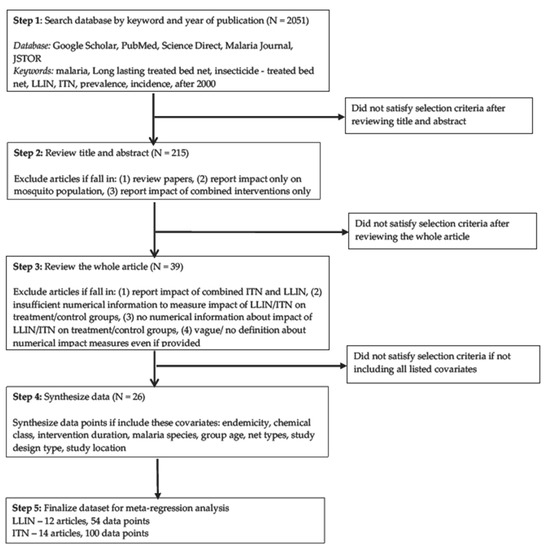