Profile Resemblance in Health-Related Markers: The Portuguese Sibling Study on Growth, Fitness, Lifestyle, and Health
Next Article in Special Issue

Improving access to and utilization of interventions that prevent or delay potentially preventable falls is critical. With approximately one-in-four older adults aged 65 years and older falling each year [1], non-fatal and fatal injuries contribute to high rates of potentially preventable medical encounters and associated costs [2,3,4]. Although not all falls lead to significant injury and related hospitalization, those that do can be costly [5]. Further, even among community-dwelling adults, discharge after fall-related hospitalization can lead to additional care needs in institutionalized settings [6]. Fall-related incidence and related consequences are anticipated to rise as the older adult population, who are at a greater risk of falling, is growing. For example, those that are aged 65 years and older living in the United States (U.S.) increased from 35.0 million in 2000 (12.4% of the overall population) to 49.2 million in 2016 (15.2% of the overall population), and it is estimated that older adults will comprise approximately one-in-five persons in the U.S. by 2030 [7]. For these reasons, increasing the availability, accessibility, and affordability of fall prevention strategies is timely and of interest to multiple stakeholders (e.g., policy-makers, aging service organizations, older adults themselves and their families) [8]. One such set of strategies are evidence-based fall prevention interventions, which have been shown to successfully reduce falls, diminish fall-related risk factors, improve physical functioning, and improve quality of life [9].
There is no single solution to combat falls among older adults. The known risk factors are multi-factorial and they can be associated with biological, psychosocial, and environmental causes [10,11]. One extrinsic risk factor for falls is residing in rural areas. Rural-dwelling older adults are at an increased risk for falls relative to their urban-dwelling counterparts [12] because of differences in the physical environment and lifestyle activities [13]. Additionally, older adults in rural areas face social issues that are associated with geographic and technological isolation [14,15] and geospatially dispersed health-related services and resources [16,17]. Therefore, in the event of a fall, rural-dwelling older adults may experience longer wait times before emergency medical personnel arrive on the scene and longer travel times to reach advanced healthcare settings [18]. Beyond diminished access to traditional healthcare services, there are fewer health promotion programs that are available in rural areas [19], which limit protective and preventative service use among rural-residing older adults. These place-based issues may exacerbate the fall-related consequences for falls that may otherwise be less severe.
While healthcare access issues among older adults are especially pronounced in rural areas [20], the vast majority of non-clinical fall prevention activities occur outside formal healthcare settings. With an emphasis on fall prevention and management, a series of evidence-based fall prevention programs have been embedded for delivery in diverse community settings to assist older adults successfully age-in-place [21]. A growing infrastructure of trained health professionals and lay leaders has been established to implement evidence-based fall prevention interventions utilizing the aging services network, public health sector, and healthcare system [8]. Because multi-factorial solutions are needed to address multi-factorial problems, these evidence-based fall prevention programs often incorporate educational components (e.g., to reduce fear of falling and improve self-efficacy) and physical activity (i.e., to improve lower body strength, balance, and flexibility) [9]. Acknowledging that there is no one-size-fits-all approach to fall prevention programming, each intervention was specifically designed for an intended audience with differing health and functional needs [21,22].
Little is known about the simultaneous grand-scale dissemination of multiple evidence-based fall prevention programs and their reach to rural areas. Although some studies have examined the delivery of fall prevention interventions and their effectiveness in rural communities [23,24], these studies often focus on only one fall prevention intervention [25,26] or a limited geographic area [27]. Additional efforts are needed to assess the delivery of fall prevention programming in rural areas to determine their availability in high-risk communities as well as to inform strategic planning efforts to enhance the dissemination of effective interventions [28].
Utilizing a methodology published previously [29], the primary purpose of this descriptive study was to identify the geospatial dissemination of fall prevention programs across the U.S. in terms of total number of participants enrolled, workshops delivered, and counties reached. We compared the dissemination characteristics across rurality. Secondarily, data were also stratified by fall program and delivery site type to provide additional context about participant and workshop characteristics.

Data for this study utilized a national repository created alongside a series of funding initiatives to support the dissemination and sustainability of chronic disease self-management education (CDSME) and fall prevention programs across the U.S. [30,31]. The process for selecting standardized measures as well as data collection tools, coordination, and processes used to develop and operate this national, online database were similar to those that were used for CDSME programs [32]. Data components in the data repository include workshop information, participant information, workshop attendance records, and organization data for host and delivery sites. Workshop leaders and organizations hosting programs collect these data locally. Data can be entered in a centralized or de-centralized manner at the state or regional level. Although outcome data were collected at baseline and post-intervention, these data are not presented as part of this study. To select the outcomes used in this national initiative, a panel of experts was convened to identify and provide recommendations about the most relevant items that are associated with fall-related risk and measures capable of detecting participant improvement over the course of these fall prevention workshops. Members of this national panel represented the federal government, academic institutions, community organizations, and program developers. Data used for this study included efforts from 39 grantees (36 unique grantees with 3 funded more than once) spanning 22 states from 2014 to 2017. The national database is limited to data for the evidence-based fall prevention programs that were chosen by organizations (for a specific target number of participants) under their grant funded by the Administration for Community Living (ACL) through the Prevention and Public Health Fund (PPHF). Grantees are required to enter their data into this national data repository. These grantees’ efforts do not represent all Title III-D approved evidence-based fall prevention programs delivered by the network of aging and healthcare organizations across the U.S., which may be funded by the Older Americans Act Title III-D, the Centers for Disease Control and Prevention Arthritis Program, or other local, state, and private funding sources. Institutional Review Board approval was granted by The University of Georgia (#00000249) for this secondary, de-identified data analysis.

All analyses were performed using SPSS (version 25, IBM Corporation, Armonk, NY, USA) for this descriptive study. Counts were tabulated for the number of participants enrolled, the number of workshops delivered, and the number of unique counties reached. These counts were stratified by workshop type and rurality (see Table 1). Counts were also stratified by delivery site type and rurality (see Table 2). Averages were calculated for participant characteristics, workshop delivery location characteristics (yielded from ZCTA of the workshop location), and workshop characteristics (see Table 3). ArcGIS (Environmental Systems Research Institute, Redlands, CA, USA) was used to geospatially map the delivery location of each workshop.

This study is not without limitations. The analyses performed were descriptive in nature using pooled data, and as such provides only a snapshot or cross-section of the overall reach of these fall prevention programs. Workshops were clustered/regional in nature and some areas are more likely to offer a particular program type over another. This clustering is an artifact that data were collected from grantees, and grants were not evenly distributed across all states. Further, grantees were able to select locations for program delivery, which were often in more metro and population-dense areas. It should also be noted that the data used in these analyses were from fall prevention programs that were delivered by ACL-funded grantees and do not represent all fall prevention programs delivered nationwide. While non-grantees are able and encouraged to use the ACL-sponsored data repository, this is only required of official ACL grantees. The proportion of participant characteristics (e.g., sex, race, ethnicity) did not always represent the ZIP Code estimates (e.g., less diversity in self-reported measures, less heterogeneity existing among older populations compared to total county estimates), which may be indicative of convenience samples and the locations where the programs were offered. This discordance may limit the generalizability of findings. Additionally, while this study reported the number of participants who enrolled in fall prevention interventions, it did not document the success of actual recruitment efforts (e.g., the proportion of participants who attended workshops relative to those invited to attend). The delivery of evidence-based programs is dependent on several factors (e.g., available resources, infrastructure); therefore, the decision to deliver a fall prevention program may be made with very different goals, preferences, available funding, target populations, and partnerships. For example, the decision and/or ability for a particular aging services organization or stakeholder to provide services to rural-residing individuals in one location may be extremely different than such decisions/abilities in another area. Further research is needed to identify the factors that are associated with program delivery decisions by grantees and their impact on participant recruitment in rural areas. While data pertaining to self-reported falls and other health indicators were collected from participants as part of this initiative, evaluating the effectiveness of these interventions is outside the scope of this descriptive geospatial study and an area for future research. Despite these limitations, this study is among the first examinations of a national dissemination of multiple, diverse evidence-based fall prevention programs.

Ongoing efforts such as this are needed to assess the delivery infrastructure and geospatial reach and adoption of evidence-based fall prevention programs. Findings from such initiatives can inform key stakeholders, including those affecting policy (e.g., federal funding organizations, state representatives), about successes and challenges to fuel informed decisions about funding priorities, and areas/regions of greatest need. Interventions are needed to prevent falls and mitigate fall-related consequences among individuals, their families, and greater society. Supporting the delivery of a diverse cadre of evidence-based fall prevention interventions ensures the diverse needs and programming preferences of older adults can be met. While there is no one-size-fits-all model for fall prevention programming, the availability of multiple effective interventions are made available to older adults with differing levels of risk across rurality. Given that rural areas have limited healthcare resources relative to metro areas, evidence-based fall prevention programming can complement traditional medical and clinical services by being embedded in an array of community-based settings.

The Administration for Community Living/Administration on Aging (ACL/AoA) is the primary funding source for this national study. The findings, conclusions, and opinions expressed do not necessarily represent official Administration for Community Living/Administration on Aging policy. The National Council on Aging (NCOA) served as the Technical Assistance Resource Center for this initiative and collected data on program participation from grantees. This manuscript received the 2018 Aging and Rural/Environmental Health Award from the Aging and Public Health Section of the American Public Health Association. 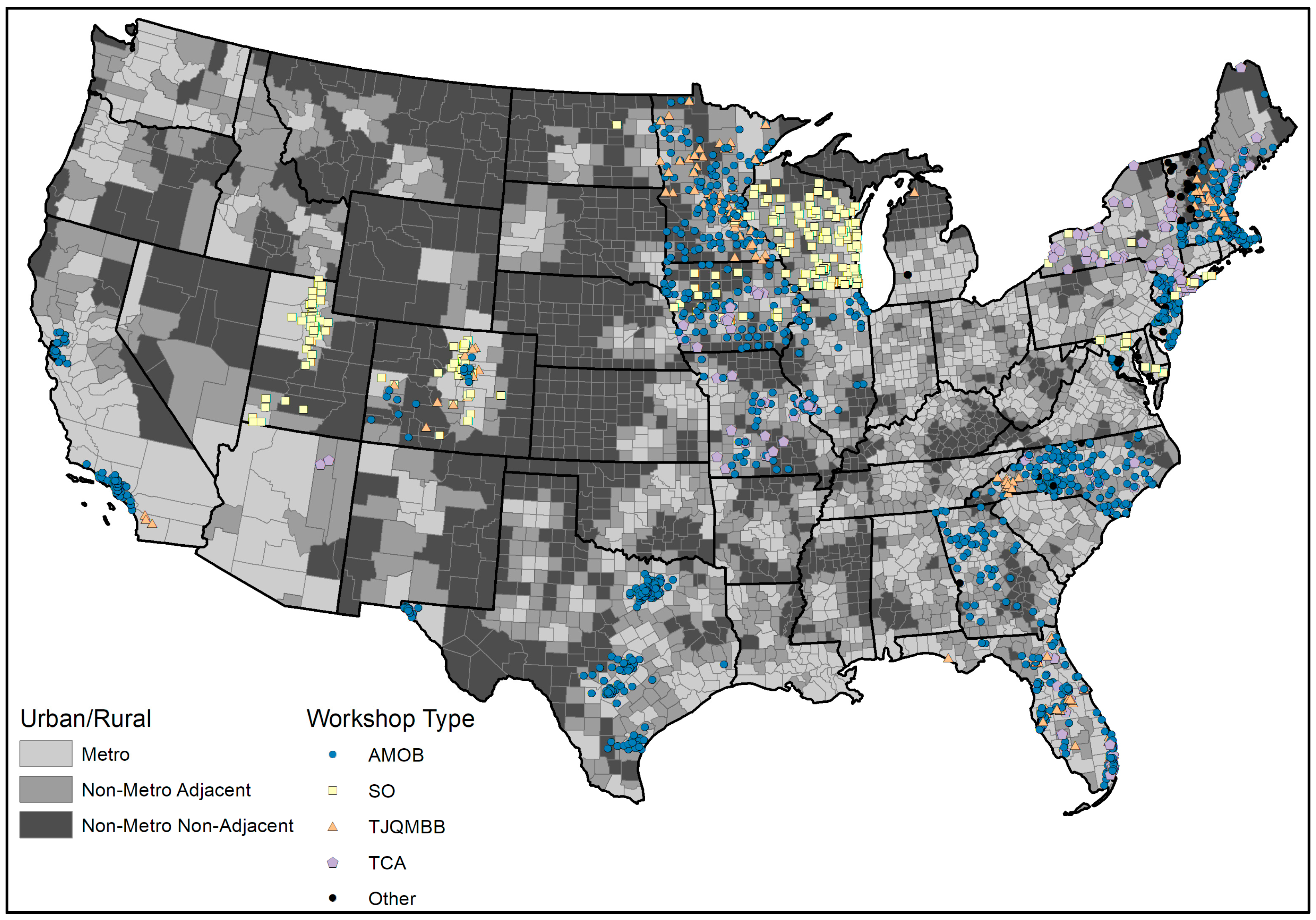