In classical toxicology studies, the interaction of combined doses of chemicals with dissimilar modes of toxic action in soil is complex and depending on the end point investigated and the experimental protocol employed. This study was used to examine the interactive effect of phenanthrene and Cadmium on two ecologically different species of earthworms; Eisenia. fetida and Aporrectodea. caliginosa. This interactive effect was scrutinized by using the acute toxicity test with the concentrations of 2.51 mg kg−1 and 3.74 mg kg−1, respectively, being lethal for 50% of E. fetida and A. caliginosa. The results showed that in the mixture treatment, phenanthrene at 5, 10, 15 and 20 mg kg−1 significantly mitigated both earthworms species mortality and body-mass loss. Moreover, the factor of Cd accumulated in E. fetida and A. caliginosa tissues was significantly decreased by about 12% and 16%, respectively. Linear regression correlation coefficient revealed that the reduction of both earthworm species mortality was negatively and significantly correlated (r2 = 0.98 ± 0.40 and 1 ± 3.9 p < 0.001) with phenanthrene concentration in soil. However, over 20 mg kg−1 of phenanthrene, both organisms mortality rate increased again, as was the Bioaccumulation factor of phenanthrene. Thus, this study proposes that the antagonistical effect of phenanthrene on Cd at a degree of concentration can be used to mitigate Cd effect on soil living organisms. However, as an implication of these results, the interpretation of standardized toxicity bioassays, including whole effluent toxicity tests and single-compound toxicity tests, should be performed with caution. In addition, risk assessment protocols for environment pollution by a mixture of metals and polycyclic aromatic hydrocarbons should include robust methods that can detect possible interactive effects between contaminants to optimize environmental protection. View Full-Text
Keywords: cadmium; phenanthrene; earthworms; toxicity; interaction effects; ecotype cadmium; phenanthrene; earthworms; toxicity; interaction effects; ecotype
►▼ Show Figures 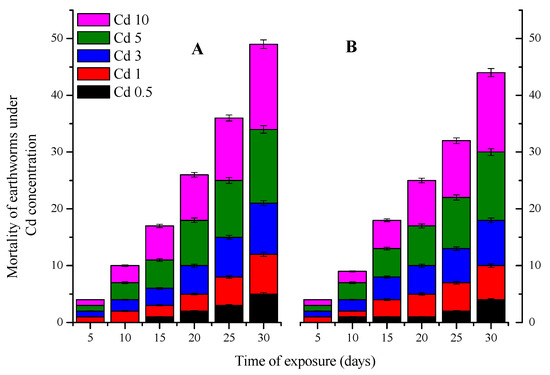