The study area is located in northern Miyun County, Beijing, China, upstream of the Miyun Reservoir. The Miyun Reservoir (40°23′ N, 116°50′ E) was built in 1960 and has a surface area of 188 km2, with a catchment area of approximately 15,788 km2. It is the largest reservoir in northern China and consists of eastern and western reservoirs, as well as an enclosed independent water body referred to as the inner lake. Two main rivers, the Chao and the Bai, flow into the Miyun Reservoir. Surface runoff roughly mirrors precipitation, with large interannual fluctuations and an uneven distribution throughout the year. The Miyun Reservoir has been used for Beijing’s drinking water storage since 1997. The water quality in Miyun Reservoir directly affects the health and safety of the residents of Beijing.

Soil samples were collected using the method described by Pan et al. [25]. Briefly, in July 2016, a total of 33 surface (0–20 cm) soil samples and 18 sediment samples were collected from farmland soil along the Chao River and Baimaguan River (Figure 1). At each sampling site, five subsamples were taken from the same area (approximately 100 m2) and thoroughly mixed to form one composite sample. The samples were placed into self-sealing polyethylene bags and transported to the laboratory. The positions of the sampling sites were recorded using a hand-held global positioning system. All soil and sediment samples were placed in polyethylene bags and brought to the laboratory. Then the samples were air-dried for 3 weeks at room temperature in a storage room, passed through a 60-mesh sieve after removing stones, residual roots, and other unwanted materials, and then sealed in brown glass bottles and stored in a refrigerator at −4 °C until subsequent analysis. Samples were analyzed following methods 3050B and 6010C proposed by the United States Environmental Protection Agency [26], respectively. Briefly, a subsample (approximately 10 g) was air-dried, and gently ground using an agate pestle, and passed through a 100-mesh nylon sieve. A total of 1 g sample was placed into a PVC digestion vessel (Anton Parr, Graz, Austria) along with 9 mL of concentrated nitric acid (HNO3) and 3 mL of hydrogen peroxide (H2O2). The vessel was then sealed and heated at 180 °C for 15 min. The concentrations of six potentially toxic elements, namely As, Cd, Cr, Cu, Pb, and Zn in the digestion solution were determined using inductively coupled plasma mass spectrometry (POEMS3; Thermo Electron, Waltham, MA, USA). Quality assurance and control (QA/QC) measures included procedural blanks, duplicate analyses and standard reference materials. Soil standard reference material (GBW07401, GSS-1) obtained from the Center of National Standard Reference Material of China was used for QA/QC. Accepted recoveries ranged from 81.0% to 109%. Statistical analyses were conducted using Microsoft Excel (Microsoft Inc., Redmond, VA, USA) and Origin 9.0 (OriginLab Corporation, Northampton, MA, USA).

The enrichment factor (EF) is considered an effective tool for evaluating the amount of contaminants in an environment. Potentially toxic element pollution levels were assessed using EFs and the geoaccumulation index (Igeo). According to Sutherland [27], EF values are calculated with the following equation:
EFs = Ci/Bi/CB/BB,
where Ci and CB is the i-th potentially toxic element concentration (mg/kg) and background value (mg/kg) in the soils, respectively. Bi and BB is the reference potentially toxic element concentration (mg/kg) and background value (mg/kg) in the soils. According to Chen et al. [2], in this study, Al was adopted as reference because it is one of the largest components of soil. Six contamination categories are generally recognized on the basis of enrichment factors (Table 1):
Igeo is a geochemical criterion introduced by Müller [28], which can be used to evaluate soil contamination by comparison between current and preindustrial concentrations. Unlike other methods of pollution assessment, Igeo takes the natural diagenetic process into account, which makes its assessments more realistic. Igeo is calculated using the following equation:
Igeo = log2(Cn/1.5 × Bn)
where Cn is the measured concentration of the potentially toxic element in soil (mg/kg), Bn is the geochemical background value of the corresponding potentially toxic element (mg/kg), and the coefficient 1.5 is used due to potential variation in the baseline data [29]. According to Müller [28], Igeo values fall into seven classes. The corresponding relationships between Igeo and the pollution level are listed in Table 2.

(1) Exposure assessment
In general, individuals are exposed to contaminants through three pathways: ingestion, inhalation and dermal contact, which can be determined according to the Exposure Factors Handbook [32]. However, for potentially toxic elements in soil, ingestion and dermal absorption are considered the main exposure pathways [33]. Thus, these two exposure pathways were selected for health risk assessment in this study. The average daily intake (ADI) of chemicals from soils is calculated using the following equations: where C is the concentration of the potentially toxic elements in soil (mg kg−1); IRing is the ingestion rate (mg day−1), 100 mg kg−1 for adults and 200 mg kg−1 for children [34]; EF is the exposure frequency, 350 days/year [34]; ED is the exposure duration, 30 years for adults and 6 years for children [34]; SA is the exposed area, 5700 cm2 for adults and 2800 cm2 for children [34]; SAF is the adherence factor, 0.07 mg/cm2 for adults and 0.2 mg/cm2 for children [34]; ABS is the dermal absorption factor, 0.001 for all elements considered in this study [34]; BW is body weight, 70 kg for adults and 20 kg for children [34]; AT is the averaging time, determined for non-carcinogens as ED × 365 days and for the carcinogens As and Cr as 70 (lifespan) × 365 days [34].
(2) Non-carcinogenic risk assessment
The hazard quotient (HQ) is traditionally used to describe non-carcinogenic risk, which is calculated as the ratio of the average daily dose and the reference dose (RfD) for a given substance. The equation is defined as follows: where RfD is the reference dose of the i-th potentically toxic element (mg/kg day−1), as listed in Table 3, which is the maximum allowable level of the potentially toxic element that causes no harmful effects on human health. In this study, the RfDing value in soil for both adults and children are taken into consideration. Because there are no reference doses for evaluating dermal absorption exposure to chemicals, USEPA [34] provides a method to assess dermal risk by multiplying the soil oral reference doses with a gastrointestinal absorption factor. To assess the overall non-carcinogenic effects of multiple chemicals, the sum of HQ values for all chemicals are expressed as HI, following the equation: if the HI value is less than 1, the exposed individual is unlikely to experience obvious adverse health effects. On the other hand, if the HI value exceeds 1, there is a chance that non-carcinogenic effects may occur, with a probability that tends to increase as HI increases.
(3) Carcinogenic risk assessment
Carcinogenic risk is defined as the probability of an individual developing any type of cancer throughout their lifetime due to exposure to carcinogenic hazards. The carcinogenic risk for an individual over a lifetime is calculated according to the following equation [35]: where the SF is the carcinogenicity slope factor (per mg/kg−day) as also listed in Table 3, if multiple carcinogenic contaminants are present, the cancer risks from all chemicals and routes are summed. Risks between 1.0 × 104 and 1.0 × 106 are generally considered acceptable [36], while those exceeding 1.0 × 104 are considered to represent a lifetime carcinogenic risk to the human body.

3.2. Potentially Toxic Element Pollution Levels in the Soil and Sediment

Relationships between the contents of potentially toxic elements, total phosphorus, and total nitrogen were investigated and shown in Table 5. Based on Spearman correlation coefficients, Cd, Pb and As were closely related (p < 0.01), as were Cu and Cr (p < 0.01). Significant correlations between metals could result from shared pollution sources [25]. As shown in Table 5, the contents of Cd and Pb were very closely related (p < 0.01) to that of total nitrogen in both soil and sediment samples. Total nitrogen concentrations in the soil could affect soil pH. Generally speaking, through the action of rainfall and irrigation water, nitrogen that enters the soil is mostly rinsed into the subsoil in the soluble NO3−, NO2−, and NH4+ forms. Under proper conditions, nitrogen can be completely nitrated rapidly. These reactions have a significant impact on soil pH; when NH4+-N enters the soil, its pH can be significantly reduced in the short term due to nitrification. Young et al [39] found that nitrification of only NH4+-N could reduce the topsoil pH by 0.2 to 1.4 units. Breteler and Smit [40] found that the pH of rhizosphere solution increased by 1.87 units under pure culture conditions with NO3−-N. Overall, the impact of nitrogen application on the soil is mainly reflected in the pH. However, more research should be conducted into the relationship between high nitrogen content and potentially toxic element levels in soils and sediments.

Quantification and assessment of heavy metal pollution and risk in the upstream of Miyun Reservoir is of great importance in ensuring a reliable drinking water supply for the inhabitants of Beijing. The average concentrations of the six potentially toxic elements were all lower than the soil environmental quality standards in China. Cadmium was the most serious pollutant in both soil and sediment, and the potential ecological risk posed by Cd in Chao and Baimaguan River soils were considerable and moderate, respectively. Overall, the potentially toxic element contents level in the upstream of the Miyun Reservoir were lower than most of the other rivers and lakes in China and other developing countries. The historical iron ore mining and agricultural activity were considered the primary sources of potentially toxic element pollution in soils and sediments in the study area. There are no serious non-carcinogenic or carcinogenic risks to either adults or children at this time, as the observed values were lower than safety threshold levels. Overall, the priority for control of Cd element should be concerned with its threat to the ecosystem in the Miyun Reservoir. For the future work in Miyun Reservoir, the fractionation, speciation and transformation mechanism of Cd in soil-water system should be considered to be studied by some models i.e., WHAM and ECOSAT. Furthermore, a number of other emerging metal contaminants (e.g., platinum, rhodium, and palladium) should be also considered in future environmental studies since nowadays they are very limited. 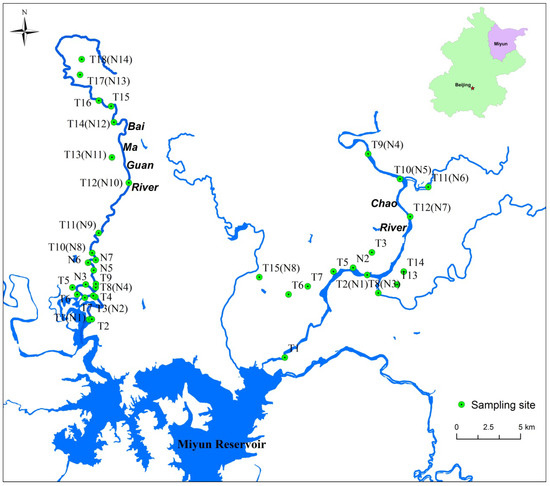 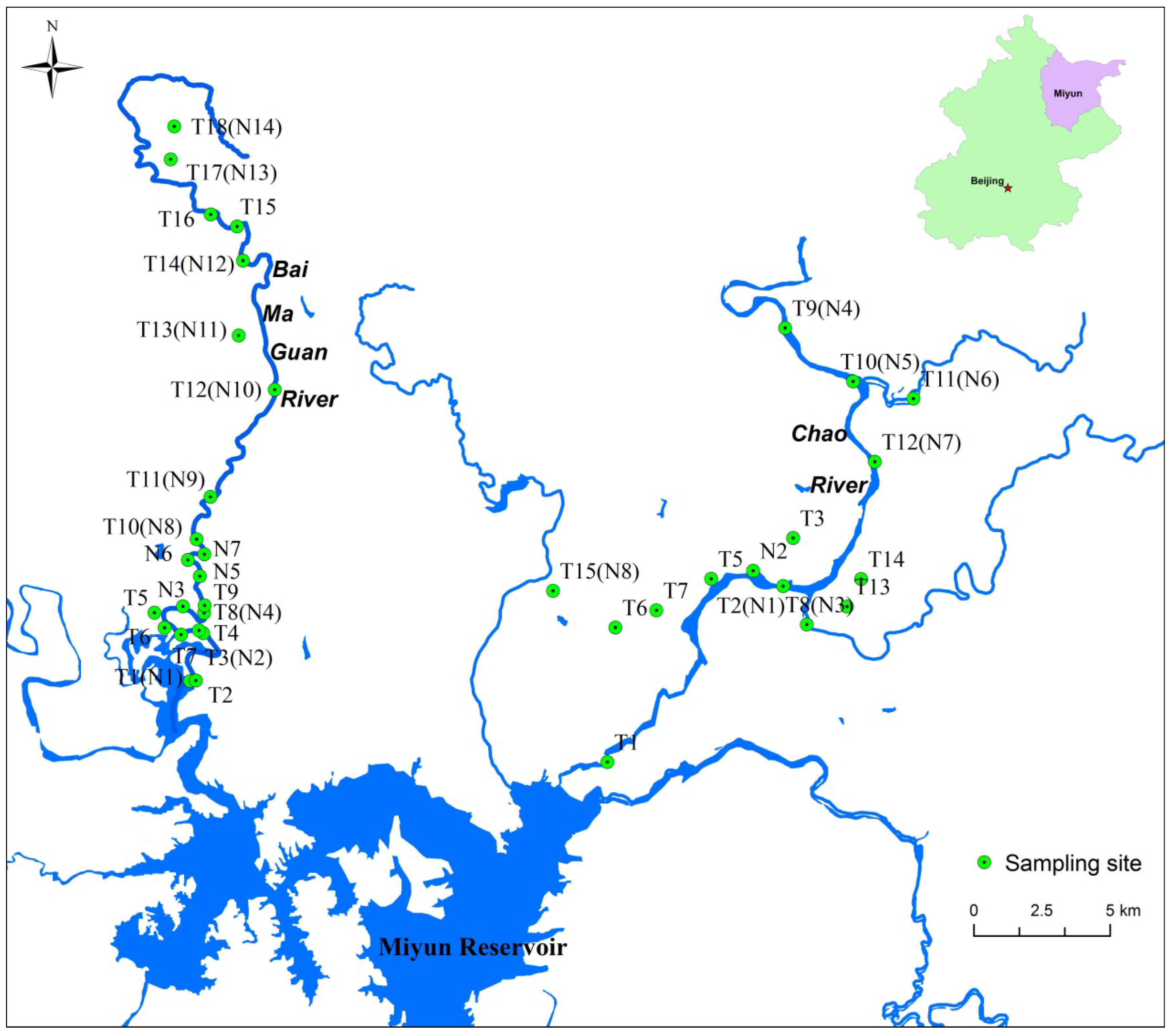