Centered on hot dry Mediterranean summer climates, this study assesses the climatic data that was extracted from Lisbon’s meteorological station between the years of 2012 and 2016. Focused on the summer period, existing outdoor human thermal comfort levels that are already prone to extreme heat stress thresholds were evaluated. Such an assessment was rooted around identifying the relationship and discrepancies between singular climatic variables (e.g., air Temperature (Ta)); and adapted thermos-physiological indices (e.g., the modified physiologically equivalent temperature (mPET)), which also consider the influence of radiation fluxes over the human body. In addition, default urban canyon case studies (UCCs) were utilized to supplement how both differ and influence one another, especially under extreme weather conditions including heat waves events (HWE), and very hot days (VHD). Through the use of wholesome thermo-physiological indices, the study revealed that while human health and thermal comfort is already prone to extreme physiological stress (PS) grades during one of the hottest months of the year, the current extremes could be drastically surpassed by the end of the century. Within the examined UCCs, it was identified that the projected PET could reach values of 58.3 °C under a projected climate change RCP8.5/SRES A1FI scenario. Similarly, and in terms of thermo-physiological stress loads, the following could happen: (i) a future “cooler summer day” could present similar conditions to those currently found during a ‘typical summer day; (ii) a future ‘typical summer day’ could present hourly physiological equivalent temperature load (PETL) that recurrently surpassed those currently found during a “very hot day”; and, (iii) a future “very hot day” could reveal severe hourly PETL values that reached 35.1 units beyond the established “no thermal stress” class. View Full-Text
Keywords: human thermal comfort; physiologically equivalent temperature; urban canyon cases; climate change; Mediterranean climate human thermal comfort; physiologically equivalent temperature; urban canyon cases; climate change; Mediterranean climate
►▼ Show Figures 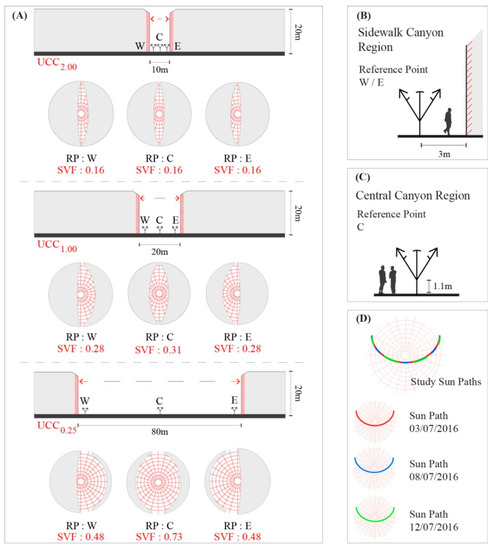