Association between Food for Life, a Whole Setting Healthy and Sustainable Food Programme, and Primary School Children’s Consumption of Fruit and Vegetables: A Cross-Sectional Study in England
Next Article in Special Issue

Dietary Calcium Intake and Adherence to the Mediterranean Diet in Spanish Children: The ANIVA Study
Previous Article in Special Issue

Background: Alongside the dramatic increase of older adults in the United States (U.S.), it is projected that the aging population residing in rural areas will continue to grow. As the prevalence of chronic diseases and multiple chronic conditions among adults continues to rise, there is additional need for evidence-based interventions to assist the aging population to improve lifestyle behaviors, and self-manage their chronic conditions. The purpose of this descriptive study was to identify the geospatial dissemination of Chronic Disease Self-Management Education (CDSME) Programs across the U.S. in terms of participants enrolled, workshops delivered, and counties reached. These dissemination characteristics were compared across rurality designations (i.e., metro areas; non-metro areas adjacent to metro areas, and non-metro areas not adjacent to metro areas). Methods: This descriptive study analyzed data from a national repository including efforts from 83 grantees spanning 47 states from December 2009 to December 2016. Counts were tabulated and averages were calculated. Results: CDSME Program workshops were delivered in 56.4% of all U.S. counties one or more times during the study period. Of the counties where a workshop was conducted, 50.5% were delivered in non-metro areas. Of the 300,640 participants enrolled in CDSME Programs, 12% attended workshops in non-metro adjacent areas, and 7% attended workshops in non-metro non-adjacent areas. The majority of workshops were delivered in healthcare organizations, senior centers/Area Agencies on Aging, and residential facilities. On average, participants residing in non-metro areas had better workshop attendance and retention rates compared to participants in metro areas. Conclusions: Findings highlight the established role of traditional organizations/entities within the aging services network, to reach remote areas and serve diverse participants (e.g., senior centers). To facilitate growth in rural areas, technical assistance will be needed. Additional efforts are needed to bolster partnerships (e.g., sharing resources and knowledge), marketing (e.g., tailored material), and regular communication among stakeholders.
Keywords: rural; chronic disease; self-management; evidence-based program; dissemination; implementation; United States of America rural; chronic disease; self-management; evidence-based program; dissemination; implementation; United States of America

Data for this study utilized a national data repository created alongside a series of national funding initiatives to support the dissemination of CDSME Programs as part of the American Recovery and Reinvestment Act of 2009 Communities Putting Prevention to Work: CDSMP initiative [31,33]. Kulinski et al. (2015) provide an in-depth account of the rationale for selecting standardized measures, as well as data collection tools, coordination, and processes used to develop and operate this national, online database [31]. Data components in the data repository include workshop information, participant information, workshop attendance records, and organization data. These data types are collected locally by workshop leaders and organizations hosting programs. Data can be entered in a centralized or de-centralized manner at the state or regional level. Data used for this study included efforts from 83 grantees spanning 47 states from December 2009 to December 2016. It is important to note that ACL/AoA grantees are required to use this national data repository. However, data entered in the system does not necessarily represent all of the CDSME Program delivery across the United States (i.e., other areas and organizations are offering CDSME Programs, but are not required to use the repository). Institutional Review Board approval was granted from The University of Georgia (#00000249) for this secondary, de-identified data analyses.

The dependent variable for this descriptive study was CDSME Programs delivery in rural areas. To categorize counties, each was assigned a Rural-Urban Continuum Code (RUCC). RUCCs were developed by the United States Department of Agriculture and use a 9-point scale to indicate proximity to nearby metro areas [34,35,36]. For this study, three categories were created to document rurality in terms of adjacency to metro areas: metro areas (i.e., RUCC of 1, 2, and 3); non-metro adjacent areas (i.e., RUCC of 4, 6, and 8), and non-metro non-adjacent areas (i.e., RUCC of 5, 7, and 9). More information about each of the nine RUCC classifications and associated methodology can be found elsewhere [37]. Among non-metro areas, the separating relative adjacency to metropolitan areas versus not adjacent to metro areas, which may matter in terms of access to care [38], allowed for assessing more than a simple rural-urban dichotomy.

Using data in the national repository, the total number of participants enrolled, workshops delivered, and unique counties reached were tabulated. Based on the ZIP Code of the workshop delivery location, the ZIP Code Tabulation Area (ZCTA) was identified, and population statistics were obtained. More specifically, the ZCTA of the workshop delivery location was used to identify the median household income (i.e., 2011 inflation-adjusted dollars), percent of residents residing in poverty (i.e., ratio of income to poverty level in the past 12 months), percent of residents who were white, percent of residents who were Hispanic, and percent of residents with less than a high school education. The average number of participants enrolled in each workshop was calculated. The average number of workshop sessions attended was reported (i.e., ranging from 1 to 6 sessions). Additionally, the proportion of participants that completed workshops (i.e., attending 4+ of the 6 offered sessions) was calculated [39].

Overall, large gaps in availability of programing were seen in the Midwest and other areas through the U.S., with gaps in programing primarily affecting rural areas. Given the already present gaps in access to care in these regions [32,46,60], policy makers and other decision makers should consider the unique needs of those in rural areas when allocating resources (e.g., funding/reimbursement for delivery). While significant, yet relatively limited, reach in rural areas has been seen, much more is needed in order to match that of the proportion reached in metropolitan areas. Continued monitoring of trends in program delivery are recommended to assess whether many of the nations’ potentially vulnerable populations have access to these potentially life-changing programs. 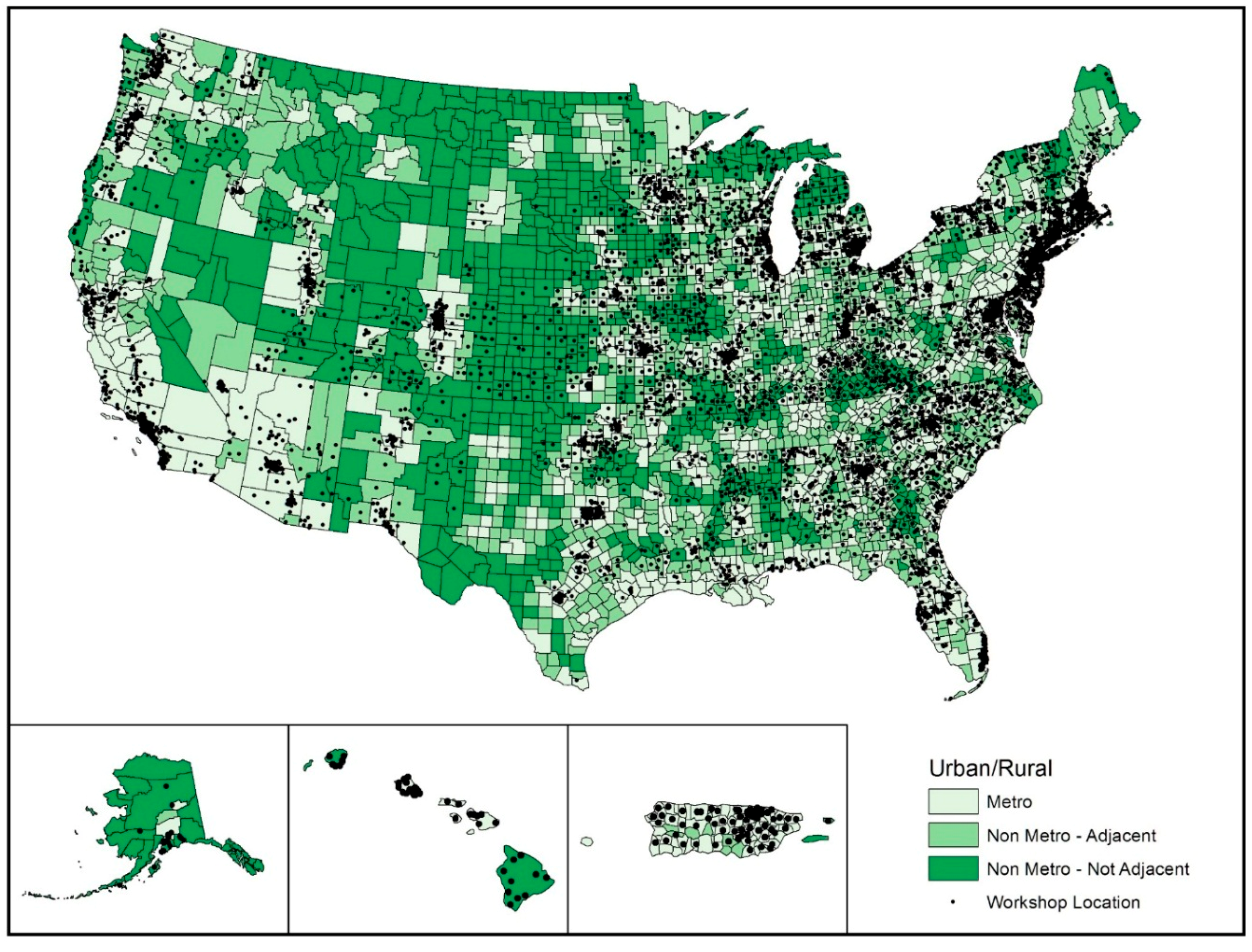