Association between Food for Life, a Whole Setting Healthy and Sustainable Food Programme, and Primary School Children’s Consumption of Fruit and Vegetables: A Cross-Sectional Study in England
Next Article in Special Issue

Dietary Calcium Intake and Adherence to the Mediterranean Diet in Spanish Children: The ANIVA Study
Previous Article in Special Issue

Scott A. Horel
2 and

Background: Alongside the dramatic increase of older adults in the United States (U.S.), it is projected that the aging population residing in rural areas will continue to grow. As the prevalence of chronic diseases and multiple chronic conditions among adults continues to rise, there is additional need for evidence-based interventions to assist the aging population to improve lifestyle behaviors, and self-manage their chronic conditions. The purpose of this descriptive study was to identify the geospatial dissemination of Chronic Disease Self-Management Education (CDSME) Programs across the U.S. in terms of participants enrolled, workshops delivered, and counties reached. These dissemination characteristics were compared across rurality designations (i.e., metro areas; non-metro areas adjacent to metro areas, and non-metro areas not adjacent to metro areas). Methods: This descriptive study analyzed data from a national repository including efforts from 83 grantees spanning 47 states from December 2009 to December 2016. Counts were tabulated and averages were calculated. Results: CDSME Program workshops were delivered in 56.4% of all U.S. counties one or more times during the study period. Of the counties where a workshop was conducted, 50.5% were delivered in non-metro areas. Of the 300,640 participants enrolled in CDSME Programs, 12% attended workshops in non-metro adjacent areas, and 7% attended workshops in non-metro non-adjacent areas. The majority of workshops were delivered in healthcare organizations, senior centers/Area Agencies on Aging, and residential facilities. On average, participants residing in non-metro areas had better workshop attendance and retention rates compared to participants in metro areas. Conclusions: Findings highlight the established role of traditional organizations/entities within the aging services network, to reach remote areas and serve diverse participants (e.g., senior centers). To facilitate growth in rural areas, technical assistance will be needed. Additional efforts are needed to bolster partnerships (e.g., sharing resources and knowledge), marketing (e.g., tailored material), and regular communication among stakeholders. View Full-Text
Keywords: rural; chronic disease; self-management; evidence-based program; dissemination; implementation; United States of America rural; chronic disease; self-management; evidence-based program; dissemination; implementation; United States of America
►▼ Show Figures 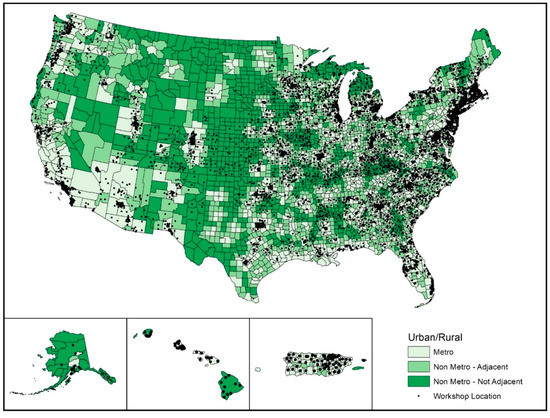