Cuttlefish (Sepia officinalis) haemocytes are potential sources of antimicrobial peptides (AMPs). To study the immune response to Vibrio splendidus and identify new AMPs, an original approach was developed based on a differential transcriptomic study and an in-depth in silico analysis using multiple tools. Two de novo transcriptomes were retrieved from cuttlefish haemocytes following challenge by V. splendidus or not. A first analysis of the annotated transcripts revealed the presence of Toll/NF-κB pathway members, including newly identified factors such as So-TLR-h, So-IKK-h and So-Rel/NF-κB-h. Out of the eight Toll/NF-κB pathway members, seven were found up-regulated following V. splendidus challenge. Besides, immune factors involved in the immune response were also identified and up-regulated. However, no AMP was identified based on annotation or conserved pattern searches. We therefore performed an in-depth in silico analysis of unannotated transcripts based on differential expression and sequence characteristics, using several tools available like PepTraq, a homemade software program. Finally, five AMP candidates were synthesized. Among them, NF19, AV19 and GK28 displayed antibacterial activity against Gram-negative bacteria. Each peptide had a different spectrum of activity, notably against Vibrio species. GK28—the most active peptide—was not haemolytic, whereas NF19 and AV19 were haemolytic at concentrations between 50 and 100 µM, 5 to 10 times higher than their minimum inhibitory concentration. View Full-Text
Keywords: antimicrobial peptide; haemocyte; Sepia officinalis; mollusc; challenge; in vitro; Vibrio splendidus antimicrobial peptide; haemocyte; Sepia officinalis; mollusc; challenge; in vitro; Vibrio splendidus
►▼ Show Figures 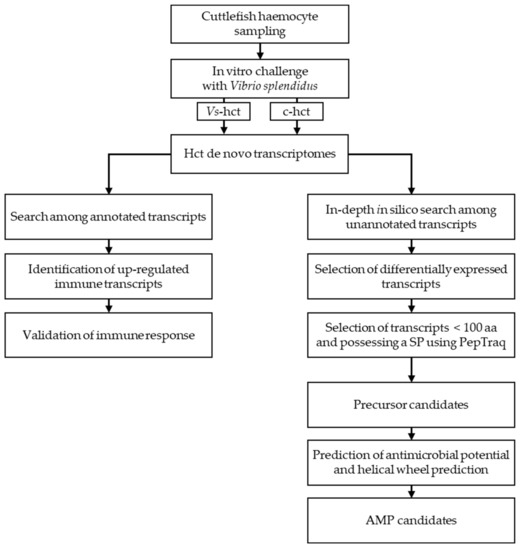