Uncovering the Core Microbiome and Distribution of Palmerolide in Synoicum adareanum Across the Anvers Island Archipelago, Antarctica

Light-Mediated Toxicity of Porphyrin-Like Pigments from a Marine Polychaeta

Porphyrins and derivatives form one of the most abundant classes of biochromes. They result from the breakdown of heme and have crucial physiological functions. Bilins are well-known representatives of this group that, besides significant antioxidant and anti-mutagenic properties, are also photosensitizers for photodynamic therapies. Recently, we demonstrated that the Polychaeta Eulalia viridis, common in the Portuguese rocky intertidal, holds a high variety of novel greenish and yellowish porphyrinoid pigments, stored as granules in the chromocytes of several organs. On the follow-up of this study, we chemically characterized pigment extracts from the worm’s skin and proboscis using HPLC and evaluated their light and dark toxicity in vivo and ex vivo using Daphnia and mussel gill tissue as models, respectively. The findings showed that the skin and proboscis have distinct patterns of hydrophilic or even amphiphilic porphyrinoids, with some substances in common. The combination of the two bioassays demonstrated that the extracts from the skin exert higher dark toxicity, whereas those from the proboscis rapidly exert light toxicity, then becoming exhausted. One particular yellow pigment that is highly abundant in the proboscis shows highly promising properties as a natural photosensitizer, revealing that porphyrinoids from marine invertebrates are important sources of these high-prized bioproducts. View Full-Text
Keywords: porphyrinoids; annelida; marine bioproducts; HPLC-DAD; toxicity; photosensitizers porphyrinoids; annelida; marine bioproducts; HPLC-DAD; toxicity; photosensitizers
►▼ Show Figures 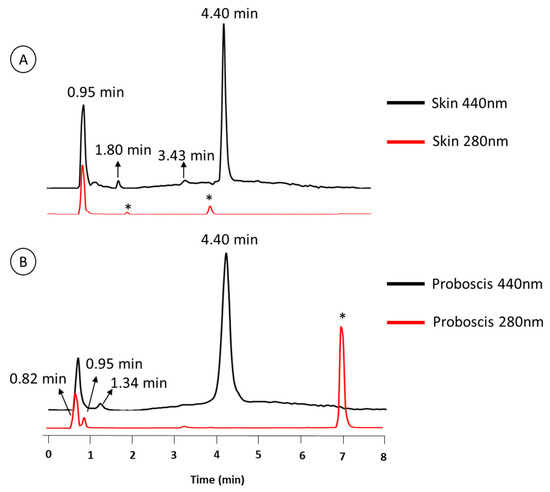