Inhibition of Skin Inflammation by Scytonemin, an Ultraviolet Sunscreen Pigment

Seaweeds as a Functional Ingredient for a Healthy Diet

Seaweeds have been used since ancient times as food, mainly by Asian countries, while in Western countries, their main application has been as gelling agents and colloids for the food, pharmaceuticals, and the cosmetic industry. Seaweeds are a good source of nutrients such as proteins, vitamins, minerals, and dietary fiber. Polyphenols, polysaccharides, and sterols, as well as other bioactive molecules, are mainly responsible for the healthy properties associated with seaweed. Antioxidant, anti-inflammatory, anti-cancer, and anti-diabetic properties are attributed to these compounds. If seaweeds are compared to terrestrial plants, they have a higher proportion of essential fatty acids as eicosapentaenoic (EPA) and docosahexaenoic (DHA) fatty acids. In addition, there are several secondary metabolites that are synthesized by algae such as terpenoids, oxylipins, phlorotannins, volatile hydrocarbons, and products of mixed biogenetic origin. Therefore, algae can be considered as a natural source of great interest, since they contain compounds with numerous biological activities and can be used as a functional ingredient in many technological applications to obtain functional foods. View Full-Text
Keywords: seaweeds; lipids; proteins; dietary fibre; polyphenols; functional food seaweeds; lipids; proteins; dietary fibre; polyphenols; functional food
►▼ Show Figures 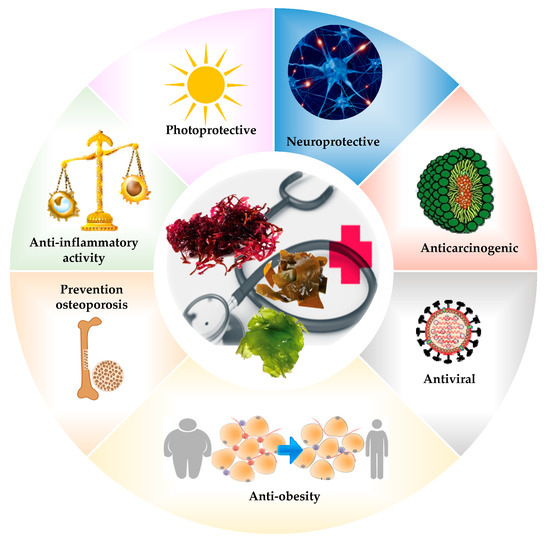