Osteoporosis is one of the most common diseases caused by an imbalance between bone resorption by osteoclasts and bone formation by osteoblasts. The aging population is more prone to osteoporosis as a result of bone resorption rates being higher than bone formation rates [1]. Antiresorptive therapies are currently used to treat osteoporosis. The main classes of these agents are bisphosphonates, calcium, and estrogen, and they help maintain bone mass by inhibiting osteoclasts [2]. However, there are certain risks associated with these treatments, such as necrosis of the jaw [3]. A number of bone-forming agents, derived from natural products, have been developed to treat osteoporosis by enhancing mesenchymal stem cell (MSC) differentiation into osteoblasts [4,5,6,7]. MSCs can differentiate into osteogenic, chondrogenic, and adipogenic lineage cells [8]. Several signaling pathways, such as Wnt/β-catenin, bone morphogenetic proteins (BMPs), mitogen-activated protein kinase (MAPK), and notch, are involved in the regulation of MSC differentiation into osteoblasts [9,10]. Many studies have revealed that Wnt signaling plays an important role in bone repair [11,12]. Accumulating evidence from these studies has shown that the use of MSCs is a promising strategy in treating bone-related diseases, such as fractures [11]. Consequently, it may be helpful to develop substances that are capable of regulating MSC differentiation into osteoblasts for bone-related disease treatment.
Marine organisms are recognized as a potential source of bioactive compounds. Due to a unique environment, bioactive compounds in marine organisms show potential health benefits, including anticancer, antioxidant, anti-inflammatory, antimicrobial, and antihypertensive activities [13,14,15,16,17,18,19]. Recently, marine organism-derived bioactive peptides (BAPs) have gained much attention due to their broad spectra of bioactivities. BAPs can be obtained by proteolytic cleavage with specific proteases and identified as promising nutraceuticals or pharmaceuticals [20]. In addition, studies show that BAPs can regulate MSC differentiation into osteoblasts by activating specific signaling pathways, such as Wnt signaling [21,22,23,24]. Recently, our group developed BAPs that can regulate MSC differentiation into osteoblasts and adipocytes [25,26,27,28]. These studies show that those BAPs upregulate BMPs or MAPK-dependent BMP signaling pathways in the regulation of MSC differentiation into osteoblasts. However, Wnt/β-catenin signaling-mediated osteoblast differentiation by those BAPs is still unexplored. Previously, we identified two antioxidant peptides (PIISVYWK and FSVVPSPK) with a hepatoprotective effect from the blue mussel [29]. Therefore, as part of our ongoing investigation on BAP functions, we investigated the potential role of PIISVYWK and FSVVPSPK in human bone marrow-derived MSC (hBMMSC) differentiation into osteoblasts through the Wnt/β-catenin signaling pathway.

The canonical Wnt/β-catenin signaling pathway is known to be involved in osteoblast differentiation of MSCs [30]. To understand the underlying molecular mechanism of hBMMSC differentiation into osteoblasts with PIISVYWK and FSVVPSPK, activation of the Wnt/β-catenin signaling pathway was investigated via Western blotting, immunofluorescence, and RT-qPCR. First, the effects of PIISVYWK and FSVVPSPK on protein expression of Wnt ligands, GSK3β, Runx2, OSX, COL1A1, cyclin D1, as well as β-catenin in the cytosolic and nuclear fractions, were examined. As shown in Figure 3A, hBMMSCs treated with the peptides showed upregulation of Wnt1, Wnt3a, Runx2, OSX, COL1A1, and cyclin D1, and downregulation of GSK3β. Protein expression of β-catenin in the cytosolic and nucleus fractions showed downregulation of cytosolic β-catenin and upregulation of nuclear β-catenin, indicating translocation of β-catenin into the nucleus (Figure 3B). An immunofluorescence assay was performed after treating the peptides to confirm nuclear translocation of β-catenin. As seen in Figure 4, immunofluorescence analysis showed that PIISVYWK and FSVVPSPK rapidly stimulated nuclear translocation of β-catenin in hBMMSCs. mRNA expression of Wnt1, Wnt3a, Runx2, OSX, COL1A1, cyclin D1, and β-catenin was significantly increased in the presence of PIISVYWK and FSVVPSPK (Figure 5).

To test whether PIISVYWK and FSVVPSPK induced osteoblast differentiation by activating the Wnt/β-catenin signaling pathway, cells were treated with DKK-1 (100 ng/mL), an antagonist of Wnt signaling, for 1 h prior to exposing the peptides. On day 7, ALP activity with and without DKK-1 in the presence of the peptides was determined. As shown in Figure 6, the peptide-treated cells showed higher ALP activity than the cells without the peptides, whereas the cells pretreated with DKK-1 showed lower ALP activity than the cells treated with the peptides. ALP staining results were consistent with the ALP activity results.
The effect of DKK-1 on mineralization was also examined. On day 21, the degree of mineralization with and without DKK-1 in the presence of the peptides was determined (Figure 7). Results showed that DKK-1 pretreatment significantly decreased the degree of mineralization compared to that of the cells without DKK-1. To further examine the involvement of DKK-1 pretreatment in Wnt/β-catenin signaling, mRNA levels of β-catenin, Runx2, OSX, and COL1A1 were examined. As shown in Figure 8, DDK-1 pretreatment attenuated PIISVYWK- and FSVVPSPK-mediated mRNA expression of Wnt/β-catenin signaling. These findings suggested that the Wnt/β-catenin signaling pathway was required for PIISVYWK- and FSVVPSPK-induced hBMMSC differentiation into osteoblasts.

4.2. Osteogenic Differentiation and Treatment of Peptides

Human bone marrow-derived mesenchymal stem cells (hBMMSCs, PCS-500-012) were obtained from the American Type Culture Collection (ATCC, Manassan, VA, USA). hBMMSCs were cultured in Dulbecco’s Modified Eagle’s Medium (DMEM, HyClone, Logan, UT, USA) supplemented with 10% fetal bovine serum and 1% penicillin/streptomycin (Gibco, Waltham, MA, USA) in a humidified incubator with 5% CO2 at 37 °C. When the cells were 80–90% confluent, osteoblastic differentiation was induced by changing to an osteogenic medium (OM, DMEM supplemented with 10−7 M dexamethasone, 50 µg/mL ascorbic acid, and 10 mM β-glycerolphosphate). To test the effects of PIISVYWK and FSVVPSPK on osteoblastic differentiation, cells were treated with OM in the presence of peptides. All media were changed every 2 days.

After treatment, MTT solution (0.5 mg/mL) was added to the cells, incubated for 4 h for the metabolism of MTT to formazan crystals, and insoluble formazan crystals were dissolved in dimethyl sulfoxide (DMSO). Absorbance was measured at 540 nm (GENios microplate reader, GENios, TECAN, Männedorf, Switzerland).

At day 21 of culturing, the cells were rinsed with deionized water four times and fixed with 70% ethanol for 1 h at 4 °C. Finally, the cells were stained with 2% ARS (pH 4.2) for 15 min with gentle agitation at room temperature, followed by washing in deionized water. The calcium deposit level was observed using a light microscope. The deposit was dissolved in 10% cetylpyridium chloride in 10 mM sodium phosphate buffer (pH 7.0) for 15 min, and absorbance was measured at 562 nm [25].

After 4 or 7 days of culturing, total RNA was isolated using a TRIzol reagent (Thermo scientific Co., Waltham, MA, USA) according to the manufacturer’s instructions. cDNA was synthesized using a cDNA synthesis kit (ET21025, PhileKorea, Seoul, Korea) according to the manufacturer’s instructions. RT-qPCR was performed using a Magnetic Induction Cycler with a QuantiSpeed SYBR kit (QS105-05, PhileKorea, Seoul, Korea). The sequences of primers are listed in Table 1. Cycling conditions were as follows: initial denaturation at 95 °C for 5 °min, followed by 40 cycles of 90 °C for 30 °s, 60 °C for 40 s, and 72 °C for 40 s. The relative quantification of RNA was calculated using the 2-ΔΔCT method. β-actin was amplified as an internal control.

Cells were grown on glass coverslips and incubated with PIISVYWK and FSVVPSPK for 4 days. The cells were rinsed with ice-cold PBS twice and fixed with 3.7% paraformaldehyde in PBS for 15 min, followed by permeabilization with 0.1% Triton X-100 in PBS for 15 min. The cells were blocked with 2% bovine serum albumin for 60 min and then incubated with a β-catenin antibody conjugated with Alexa Flour 488 (1:500 dilution, Santa Cruz Biotechnology) in 0.1% BSA for 3 h at room temperature, followed by staining with Hoechst 33342 (2 μg/mL) for 15 min. The cells were washed with PBS three times and viewed on a fluorescence microscope (Leica, Wetzlar, Germany).

In conclusion, this study demonstrated that blue mussel-derived antioxidant peptides PIISVYWK and FSVVPSPK promoted osteoblast differentiation by increasing ALP activity and the level of mineralization in hBMMSCs. The two peptides also increased osteoblastic differentiation markers, such as Runx2, OSX, and COL1A1. The mechanistic study revealed that the two peptides increased Wnt molecule signaling by transcriptional and translational regulation. In addition, pharmacological approaches suggested that the two peptide-mediated Wnt/β-catenin signaling pathway was involved in osteoblast differentiation of hBMMSCs. These findings may be helpful for new insights into peptide-mediated osteogenesis and developing peptide-based therapeutic agents for bone-related diseases.

Investigation, Y.O. and C.-B.A.; writing—review and editing, project administration, J.-Y.J. All authors have read and agreed to the published version of the manuscript.

This study was supported by the Basic Science Research Program through the National Research Foundation of Korea (NRF) funded by the Ministry of Education (NRF-2016R1A2B4016004). 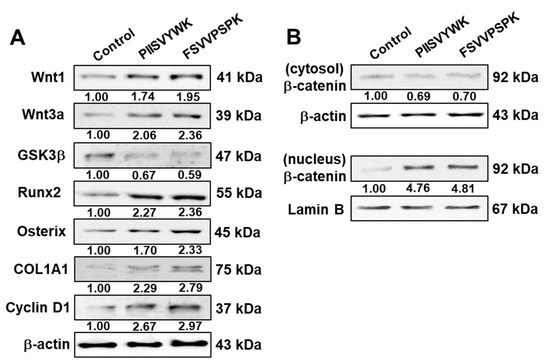 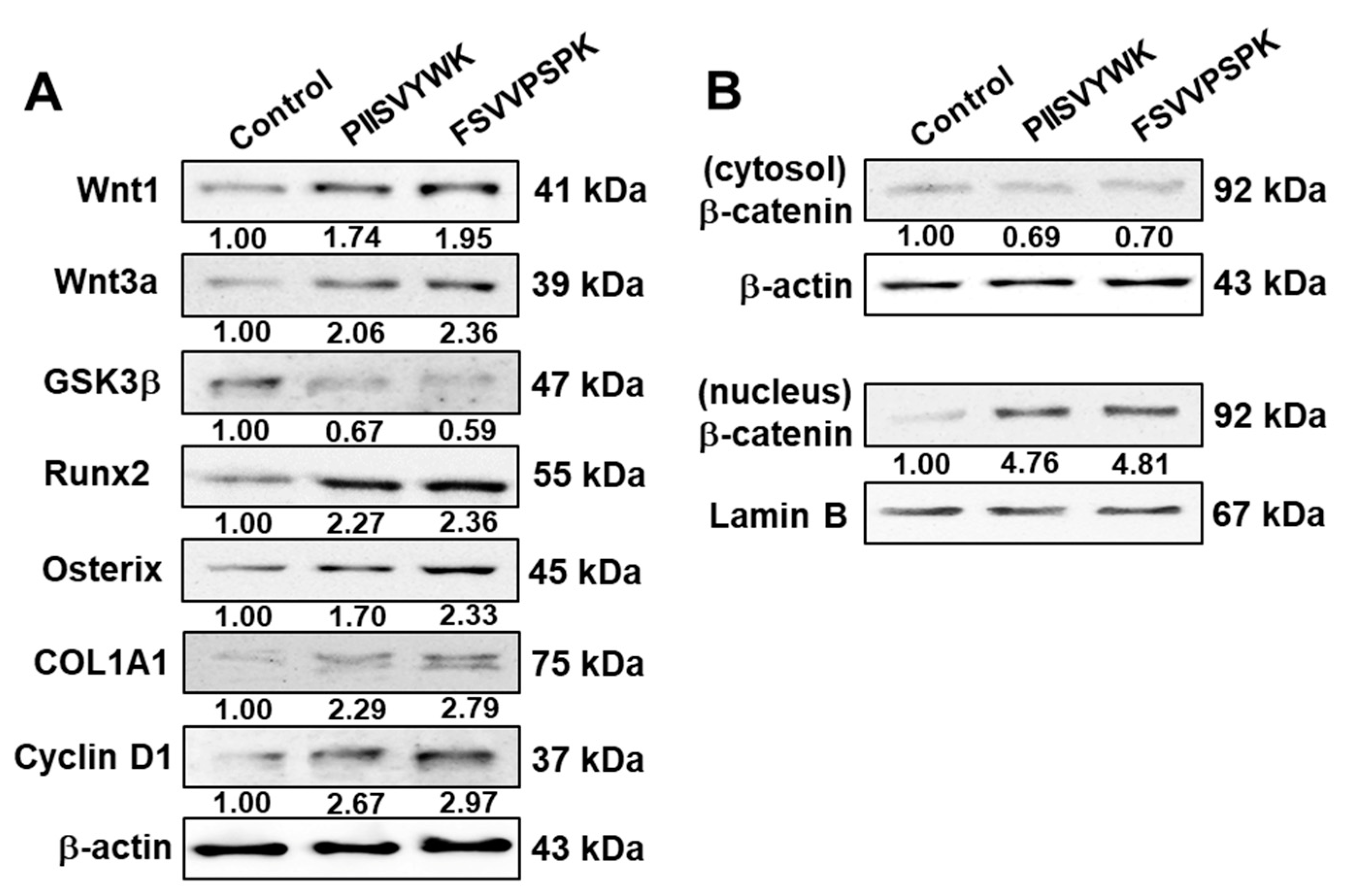 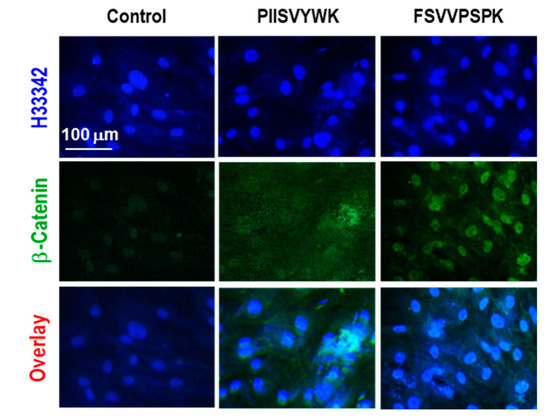 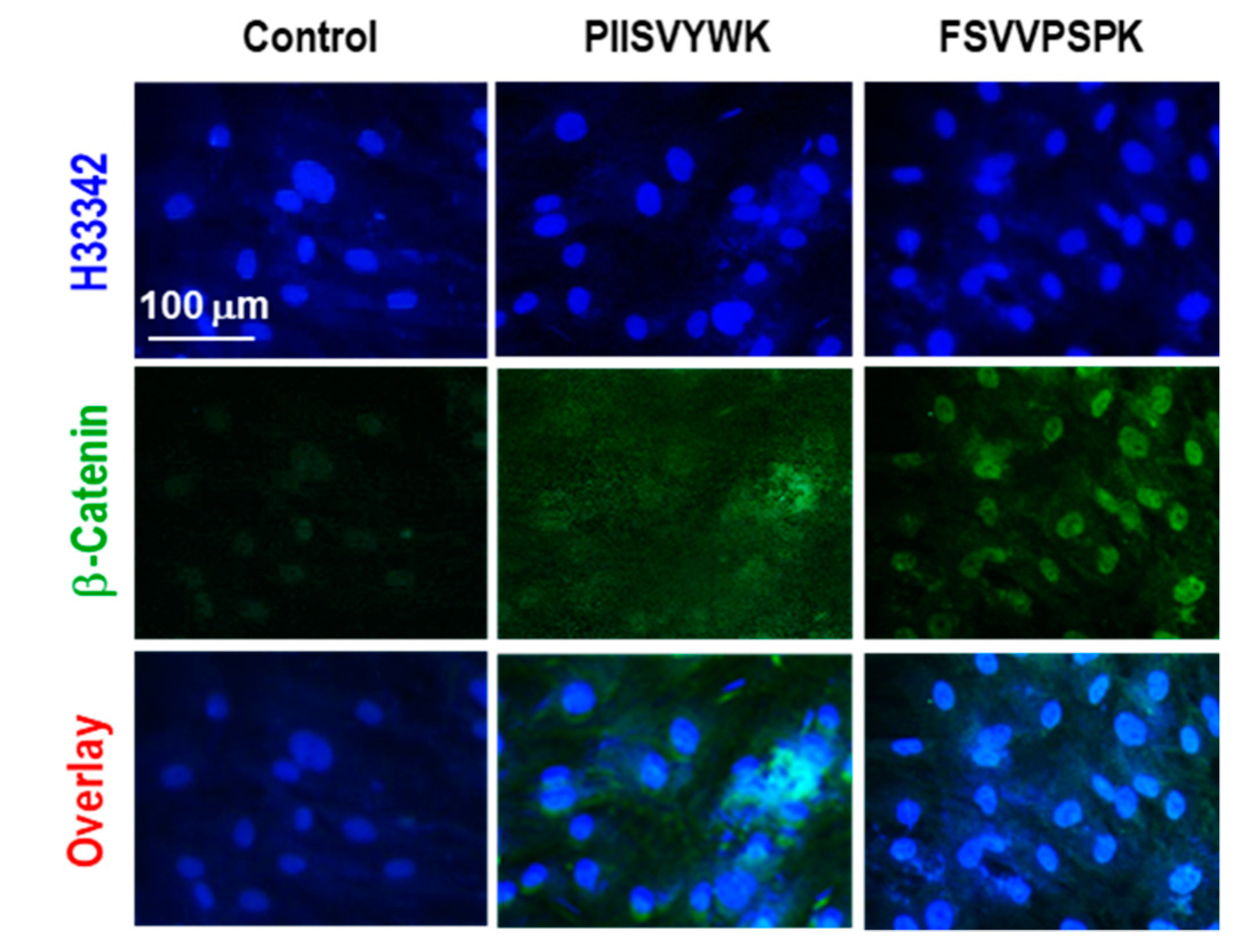 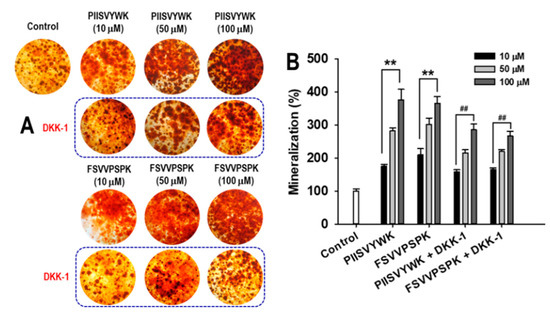 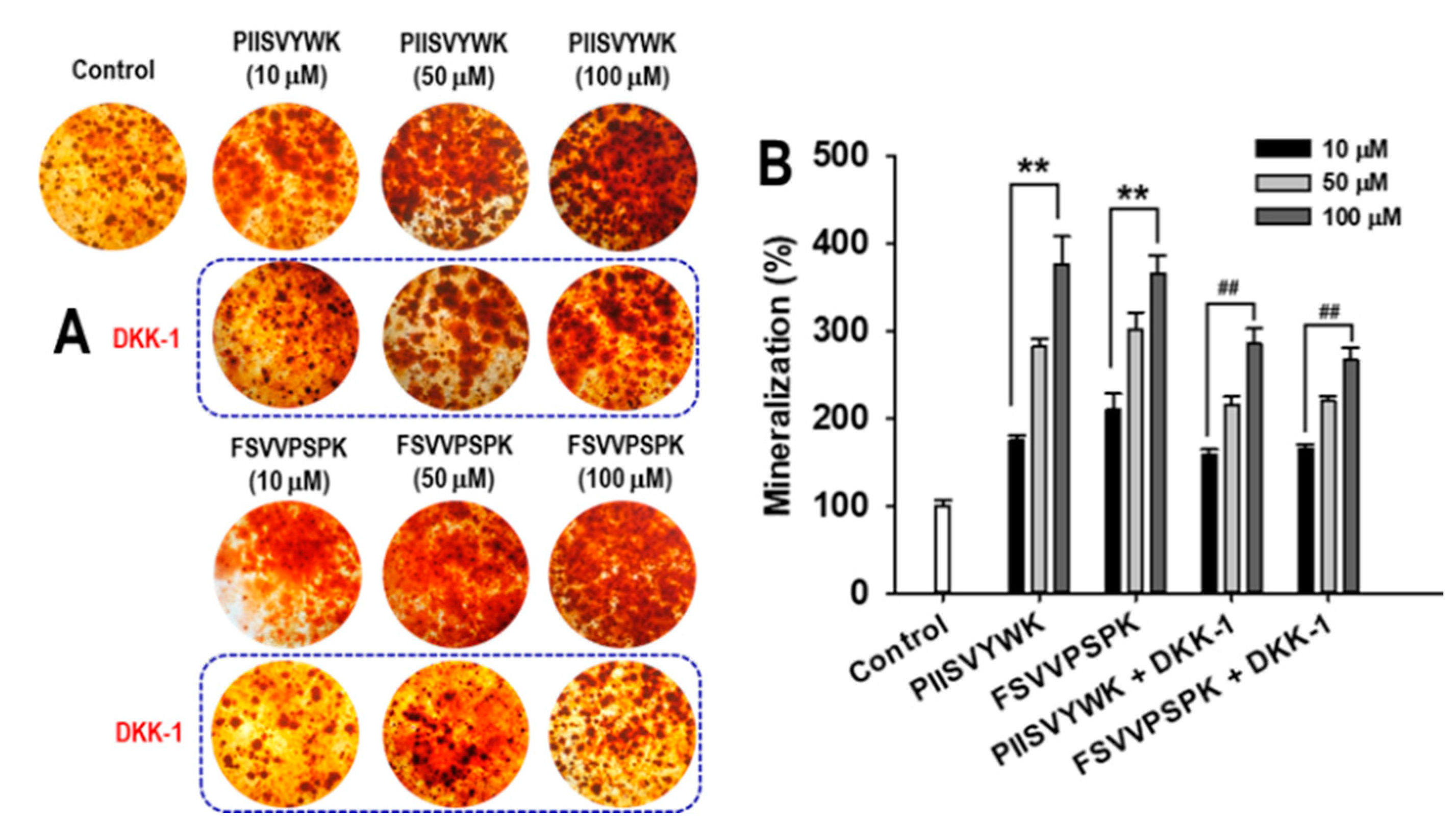 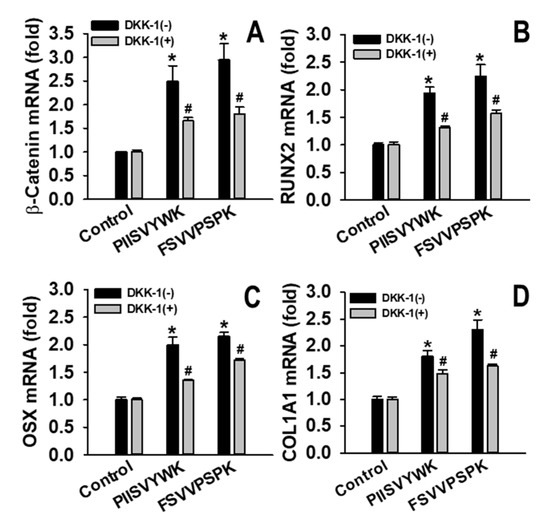 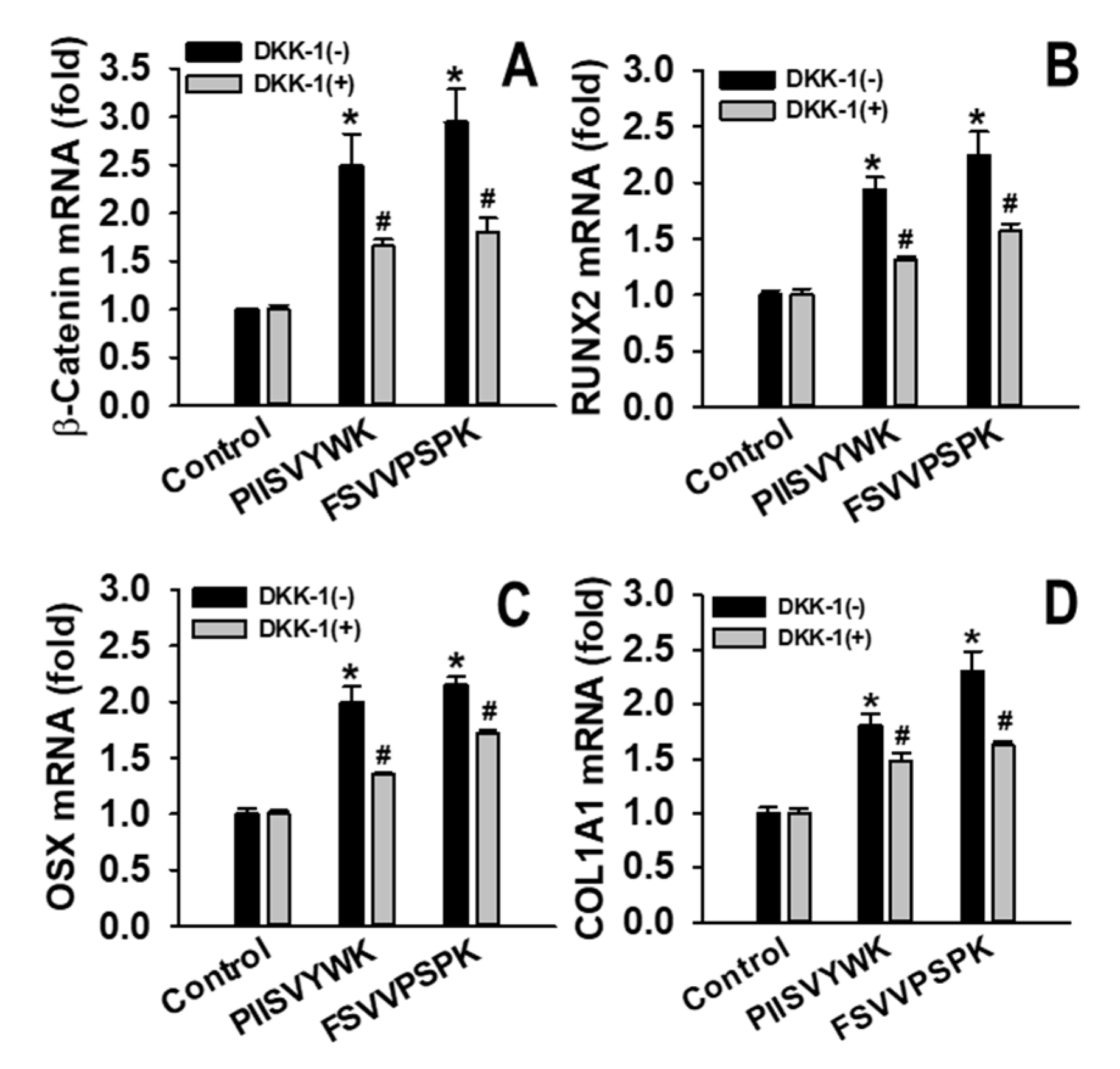 Table 1. RT-qPCR primers.
Table 1. RT-qPCR primers.
© 2020 by the authors. Licensee MDPI, Basel, Switzerland. This article is an open access article distributed under the terms and conditions of the Creative Commons Attribution (CC BY) license (http://creativecommons.org/licenses/by/4.0/).
We use cookies on our website to ensure you get the best experience. Read more about our cookies here.
Accept
We have just recently launched a new version of our website. Help us to further improve by taking part in this short 5 minute survey here. here.
Never show this again