ε-poly-l-Lysine (ε-PLL) peptide is a product of the marine bacterium Bacillus subtilis with antibacterial and anticancer activity largely used worldwide as a food preservative. ε-PLL and its synthetic analogue α,ε-poly-l-lysine (α,ε-PLL) are also employed in the biomedical field as enhancers of anticancer drugs and for drug and gene delivery applications. Recently, several studies reported the interaction between these non-canonical peptides and DNA targets. Among the most important DNA targets are the DNA secondary structures known as G-quadruplexes (G4s) which play relevant roles in many biological processes and disease-related mechanisms. The search for novel ligands capable of interfering with G4-driven biological processes elicits growing attention in the screening of new classes of G4 binders. In this context, we have here investigated the potential of α,ε-PLL as a G4 ligand. In particular, the effects of the incubation of two different models of G4 DNA, i.e., the parallel G4 formed by the Pu22 (d[TGAGGGTGGGTAGGGTGGGTAA]) sequence, a mutated and shorter analogue of the G4-forming sequence known as Pu27 located in the promoter of the c-myc oncogene, and the hybrid parallel/antiparallel G4 formed by the human Tel22 (d[AGGGTTAGGGTTAGGGTTAGGG]) telomeric sequence, with α,ε-PLL are discussed in the light of circular dichroism (CD), UV, fluorescence, size exclusion chromatography (SEC), and surface plasmon resonance (SPR) evidence. Even though the SPR results indicated that α,ε-PLL is capable of binding with µM affinity to both the G4 models, spectroscopic and SEC investigations disclosed significant differences in the structural properties of the resulting α,ε-PLL/G4 complexes which support the use of α,ε-PLL as a G4 ligand capable of discriminating among different G4 topologies.
Keywords: marine peptide; epsilon-poly-l-lysine; ε-PLL; G-quadruplex DNA; human telomere; c-myc oncogene marine peptide; epsilon-poly-l-lysine; ε-PLL; G-quadruplex DNA; human telomere; c-myc oncogene

ε-poly-l-Lysine (ε-PLL) is a cationic biopolymer isolated from the marine bacterium Bacillus subtilis, responsible for the antibacterial and anticancer activity shown by this microorganism [1]. The same peptide is also produced by the marine bacterial strain PL26 of Bacillus licheniformis, isolated from the west coast of India [2]. Due to its well-known antimicrobial properties, ε-PLL is largely used worldwide as a food preservative [3,4], but is also used in many biomedical applications, including the enhancement of some anticancer agents [5], the suppression of the production of the prion protein in neurodegenerative disorders [6], the use in contrast agent probes for Magnetic Resonance Imaging [7] and the enhancement of gene delivery efficiency [8]. The industrial production of ε-PLL makes use of a mutant of Streptomyces albulus [9]. Still, it can be conveniently achieved also using the above mentioned strain PL26 of marine bacterium Bacillus licheniformis starting from waste material from biodiesel manufacturing industries [1,2]. On the other side, α-poly-l-lysine (α-PLL) is a synthetic poly(amino acid) successfully used in different biotechnological applications, e.g., in biomass production by microalgae Chlorella ellipsoidea [10]. α- and ε-PLL peptides are well soluble in aqueous media, biodegradable, and environmental-friendly [11], and both are good candidates as drug delivery agents due to their polycationic nature [11,12]. Even though dendrimeric α,ε-poly-l-lysines had been previously realized for the compacting and delivery of oligonucleotides [13], a synthetic approach to linear PLLs with sequential α- and ε-peptide bonds (α,ε-PLLs, Figure 1) was firstly reported by Roviello et al. alongside with the initial biological assessment of α,ε-PLLs [13,14,15]. The interest in poly-l-lysine structures containing both α- and ε- peptide bonds is justified by their superior gene delivery properties when compared to linear or dendritic PLLs based uniquely on ε-peptide bonds [16]. PLLs having a random α- and ε- peptide bond sequence (hyperbranched polylysines) are more resistant to proteolytic action than linear PLL, but undergo a significant degradation after 8 h [17]. On the other side, linear α,ε-PLLs, easily obtainable by standard solid-phase peptide synthesis procedures [15,18,19] and endowed with structural specific nucleic acids binding abilities, do not show any significant degradation after 24 h of incubation in human serum at 37 °C [14].
Among the DNA secondary structures, the G-quadruplex (G4) family is one of the most intriguing and deeply investigated [20,21,22,23]. It has been demonstrated that G4 DNA plays a crucial role in many physiological and disease-related biological mechanisms [24]. Apart from the ubiquitous potassium or sodium cations, positively-charged polyamines and triethylene tetraamine may contribute to the G4 stability and induce biologically-relevant effects [25,26]. In this context, also the polycationic PLL was evaluated for its impact on the formation of G4 structures by the human telomere in cation-deficient media and showed the interesting ability to convert the telomeric G4 from the antiparallel to the parallel topology [27]. However, to our knowledge, no study has yet been published on the interaction of α,ε-PLL with any G4 DNA.
Thus, herein, we report the results of our study on the effects of α,ε-PLL on two different G4 topologies investigated by CD, UV, fluorescence, size exclusion chromatography and SPR techniques. The hybrid-type G4 adopted by the Tel22 telomeric sequence (d[AGGGTTAGGGTTAGGGTTAGGG]), commonly used as the human telomeric DNA model, and the parallel G4 formed by the Pu22 (d[TGAGGGTGGGTAGGGTGGGTAA]) sequence, a shorter and mutated analogue of the G4-forming Pu27 sequence located in the promoter of the human c-myc oncogene, have been employed for this study [28,29]. These two model DNAs can adopt several kinds of topologies under different experimental conditions and are used in this study to evaluate the ability of our lysine-rich peptide to modify, similarly to other oligocation binders [27,30,31], G4 DNA structures.
The results of this study have suggested that α,ε-PLL is a G4 ligand able to bind to both G4 models with µM affinity leading, however, to more evident changes in the secondary structure of parallel G4 structures as described hereinbelow.

We obtained the CD spectra in a 210–320 nm wavelength range, on a Jasco J-810 spectropolarimeter equipped with a Jasco PTC-423S/15 Peltier temperature controller (Jasco Europe Srl, Cremella, Italy) in a dual-chamber quartz cell (b = 2 × 0.4375, Hellma 238-QS, Hellma® Analytics, Hellma GmbH & Co. KG, Müllheim, Germany). UV spectra were recorded on a Jasco V-550 spectrophotometer equipped with a Jasco ETC-505T Peltier temperature controller. All spectroscopic experiments were run in duplicate and were repeated three times. Standard deviation values for CD and UV Abs were ≤2%. CD meltings of telomeric and Pu22 G4 DNAs were obtained by recording CD values at 295 and 263 nm, respectively, as function of temperature. All nucleic acids were annealed by heating the solutions at 95 °C for 5 min and letting them cool overnight at room temperature. Melting temperature values were determined as the temperatures relative to minima of the 1st derivative plots of denaturation curves.

The experiments were performed at 15 °C using the intrinsic fluorescence of G4 DNAs as reported previously [46], using an excitation wavelength of 270 nm and a fluorescence emission wavelength ranging from 330 to 500 nm on a Jasco FP 8300 spectrofluorometer using a 10 mm path-length quartz cuvette. The acquisition parameters were set as follows: excitation and emission slits at 5 nm; 200 nm/min scan rate; 0.5 nm data interval averaging time at 0.050 s, PMT voltage at “medium”.

SPR assays were performed at 25 °C on a Biacore 3000 instrument (GE Healthcare, Chicago, IL, US). For immobilization, 5’-biotinylated Tel22 and Pu22 ODNs were injected for 7 min (at 20 µM) on a SA-chip until an immobilization of ~700 RU was achieved, as previously reported [47,48]. The α,ε-PLL analyte was serially diluted in the 10 µM TRIS HCl buffer supplemented with 100 µM KCl (pH 7.4) running buffer, covering a concentration range between 50 and 1000 nM. 90 µL analyte samples were injected at a flow rate of 20 µL/min and the dissociation was followed for 300 s. The reference chip sensorgrams were properly subtracted to sample sensorgrams. After each cycle, the sensor chip surface was regenerated with a 1.0 M NaCl solution for 30 s followed by multiple buffer injections to yield a stable baseline for the following cycles. Experiments were carried out in duplicates. Kinetic parameters were estimated assuming a 1:1 binding model and using version 4.1 Evaluation Software (GE Healthcare).

Overall, the above-reported findings showed that α,ε-PLL binds the two herein investigated DNA G-quadruplexes with good affinity (as demonstrated by SPR), though clues of changes of the secondary structure and slight thermal stabilization were seen only for the interaction with the Pu22 parallel G4. Following complexation with α,ε-PLL, Pu22 G4 underwent significant alterations of its spectroscopic (CD, UV and fluorescence) properties. In particular, the slight blue-shift in the fluorescence band of peptide/Pu22 complex and the hypochromic UV effect indicated that the interaction with α,ε-PLL increased base stacking within the G4 core. In conclusion, the here presented study provides an interesting insight into G-quadruplex binding of α,ε-PLL, a serum stable [14], marine-inspired peptide that, in spite of its cationic nature, recognizes the structural properties of its targets and uses different binding modes according to their topology. 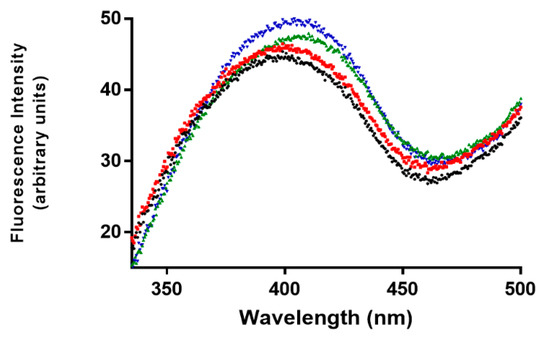 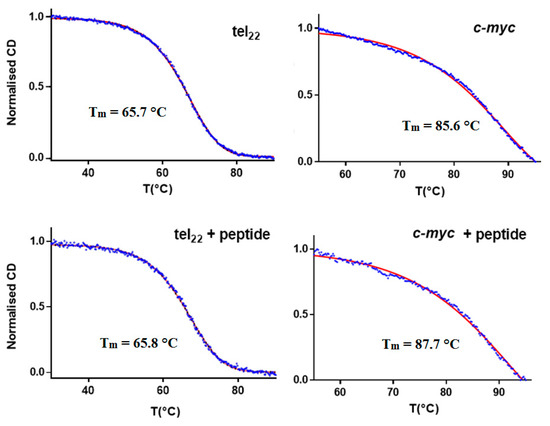 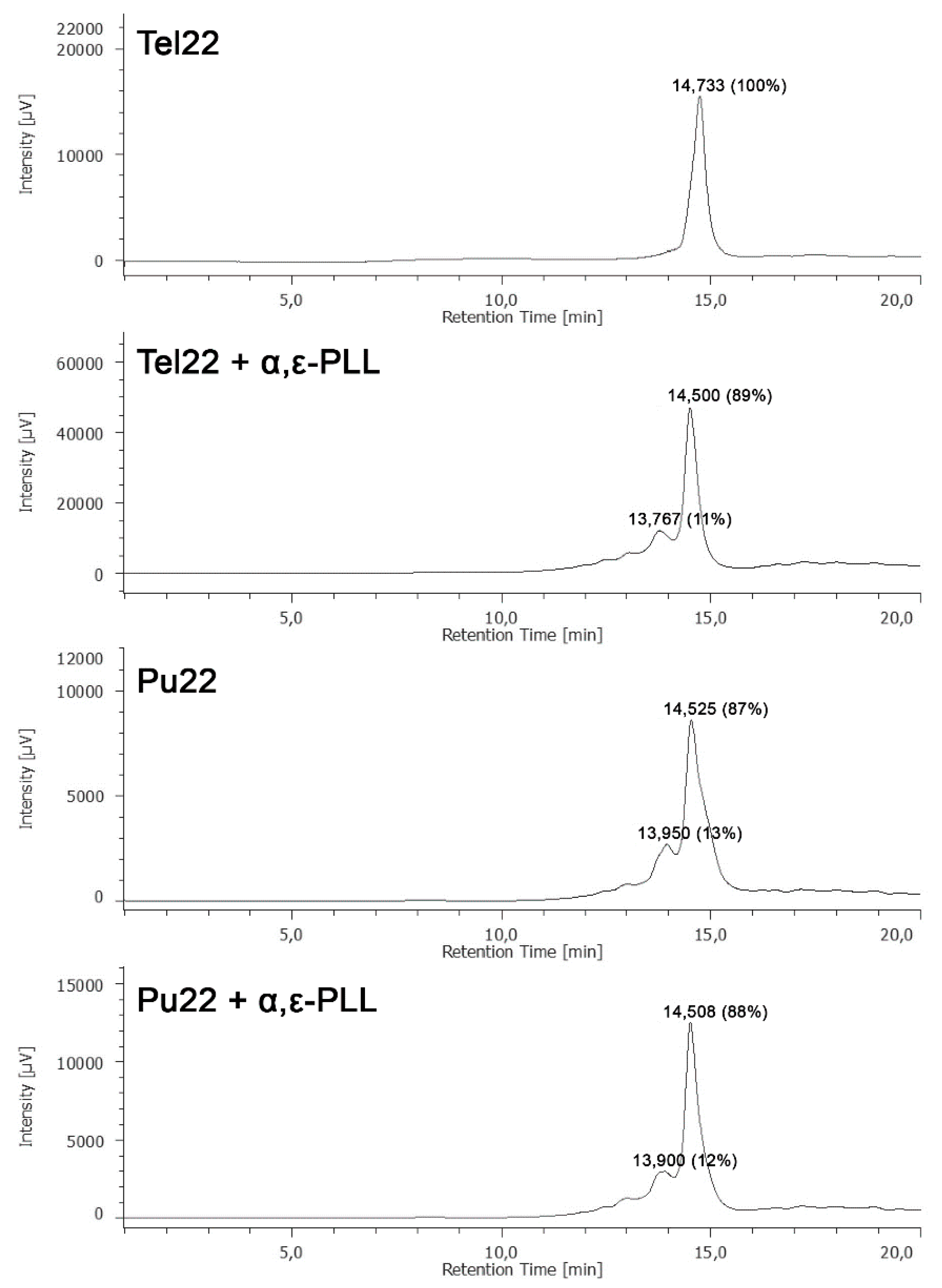