ε-poly-l-Lysine (ε-PLL) peptide is a product of the marine bacterium Bacillus subtilis with antibacterial and anticancer activity largely used worldwide as a food preservative. ε-PLL and its synthetic analogue α,ε-poly-l-lysine (α,ε-PLL) are also employed in the biomedical field as enhancers of anticancer drugs and for drug and gene delivery applications. Recently, several studies reported the interaction between these non-canonical peptides and DNA targets. Among the most important DNA targets are the DNA secondary structures known as G-quadruplexes (G4s) which play relevant roles in many biological processes and disease-related mechanisms. The search for novel ligands capable of interfering with G4-driven biological processes elicits growing attention in the screening of new classes of G4 binders. In this context, we have here investigated the potential of α,ε-PLL as a G4 ligand. In particular, the effects of the incubation of two different models of G4 DNA, i.e., the parallel G4 formed by the Pu22 (d[TGAGGGTGGGTAGGGTGGGTAA]) sequence, a mutated and shorter analogue of the G4-forming sequence known as Pu27 located in the promoter of the c-myc oncogene, and the hybrid parallel/antiparallel G4 formed by the human Tel22 (d[AGGGTTAGGGTTAGGGTTAGGG]) telomeric sequence, with α,ε-PLL are discussed in the light of circular dichroism (CD), UV, fluorescence, size exclusion chromatography (SEC), and surface plasmon resonance (SPR) evidence. Even though the SPR results indicated that α,ε-PLL is capable of binding with µM affinity to both the G4 models, spectroscopic and SEC investigations disclosed significant differences in the structural properties of the resulting α,ε-PLL/G4 complexes which support the use of α,ε-PLL as a G4 ligand capable of discriminating among different G4 topologies. View Full-Text
Keywords: marine peptide; epsilon-poly-l-lysine; ε-PLL; G-quadruplex DNA; human telomere; c-myc oncogene marine peptide; epsilon-poly-l-lysine; ε-PLL; G-quadruplex DNA; human telomere; c-myc oncogene
►▼ Show Figures 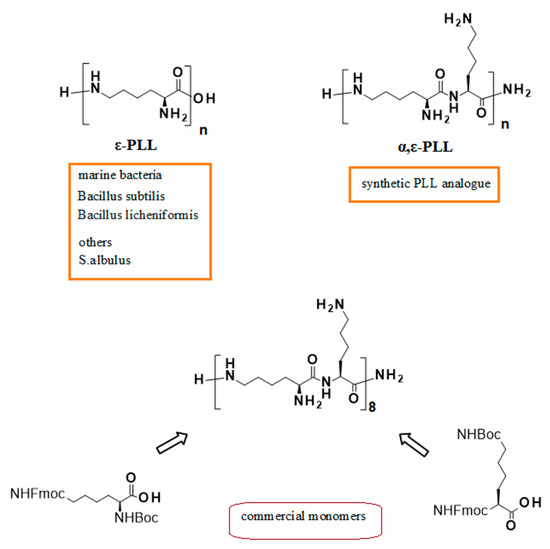