The fungus Aspergillus ochraceus was isolated from the Mediterranean sponge Agelas oroides. The initial fermentation of the fungus on solid rice medium yielded 16 known compounds (4–19). The addition of several inorganic salts to the rice medium mainly influenced the accumulation of these secondary metabolites. Fermentation of the fungus on white bean medium yielded the new waspergillamide B (1) featuring an unusual p-nitrobenzoic acid as partial structure. Moreover, two new compounds, ochraspergillic acids A and B (2 and 3), which are both adducts of dihydropenicillic acid and o- or p-aminobenzoic acid, were isolated from the co-culture of the fungus with Bacillus subtilis. Compound 2 was also detected in axenic fungal cultures following the addition of either anthranilic acid or tryptophan to the rice medium. The structures of the new compounds were established by 1D and 2DNMR experiments as well as from the HRMS data. The absolute configuration of 1 was elucidated following hydrolysis and derivatization of the amino acids using Marfey’s reagent. Viomellein (9) and ochratoxin B (18) exhibited strong cytotoxicity against the A2780 human ovarian carcinoma cells with IC50 values of 5.0 and 3.0 µM, respectively. View Full-Text
Keywords: Aspergillus ochraceus; OSMAC; co-cultivation; cytotoxicity Aspergillus ochraceus; OSMAC; co-cultivation; cytotoxicity
►▼ Show Figures 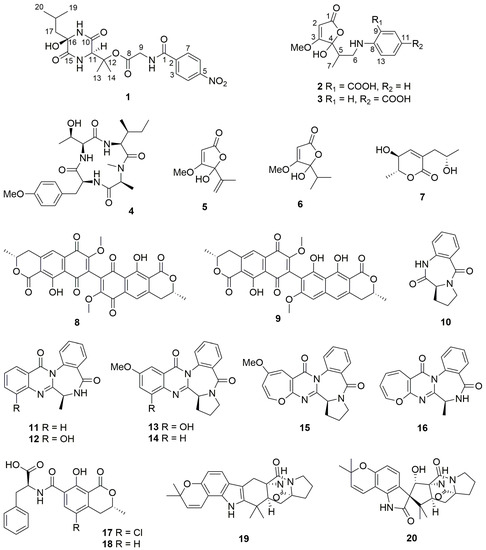