Long-term and heavy consumption of alcohol leads to hepatotoxicity, thus increasing the risk of chronic liver damage [1]. The pathogenesis of alcoholic liver disease (ALD) is a result of chronic alcohol usage. In the United States, approximately 44% of the 26,000 reported deaths due to cirrhosis are due to ALD [2]. In South Korea, next to Hepatitis B and C, 20% of chronic liver diseases are due to ALD [3]. Chronic alcohol consumption is associated with progressive liver disease ranging from steatosis to inflammation, development of hepatic cirrhosis, and the subsequent increase in the risk of hepatocellular carcinoma.
Alcohol is readily absorbed from the gastrointestinal tract, rapidly circulated, and gets uniformly distributed throughout the body. Metabolism of alcohol mainly takes place in the liver via oxidative enzymatic pathways involving enzymes such as alcohol dehydrogenase (ADH), catalase (CAT), and the microsomal ethanol oxidation system (MEOS). Free radicals are generated extensively in each pathway, altering cellular redox homeostasis [4]. ADH breaks alcohol down to acetaldehyde, whereas aldehyde dehydrogenase (ALDH) oxidizes acetaldehyde to acetate. The acetate is unstable and breaks down into water and carbon dioxide. MEOS is an auxiliary pathway that becomes active upon chronic alcohol induction. The pathway is catalyzed by cytochrome P450 enzymes. The isoform 2E1 of the cytochrome P450 (CYP2E1) system gets induced during chronic alcohol consumption. Activated CYP2E1 leads to increased ROS generation, including superoxide anions and hydroxyl radicals resulting in oxidative stress and cell death [5,6]. Moreover, peroxisomal activity in the liver contributes to ethanol oxidation, whereas ethanol reacts with H2O2 catalyzed by CAT, producing acetaldehyde and water. This mechanism might be more prominent in heavy ethanol consumers where there is an accumulation of fatty acids in the liver, due to the increased peroxisomal oxidation of fatty acids [4]. Additionally, ADH oxidation of ethanol and subsequent catabolism of acetaldehyde results in an increase in the NADH/NAD+ ratio in the cytoplasm and mitochondria. Increased NADH inhibits mitochondrial β-oxidation reactions inhibiting fatty acid catabolism, which causes the accumulation of intracellular lipids. ROS generated during alcohol metabolism not only increases the fat accumulation in hepatocytes, but also sensitizes the liver to subsequent cytokine outbreaks [5,7].
Given the context, antioxidant therapy is of interest as a potential treatment strategy for ALD. Krill peptides are renowned for their strong antioxidant effects and may have potential activity against oxidative stress [8,9]. Also, it has been reported that krill-derived peptides with molecular weights of 300–1400 Da reduce ice crystal formation during frozen storage in lizardfish myofibrils, leading to structural stabilization while inactivating Ca2+-ATPase activity. The present study is a continuation of our previous research, which supports the antioxidant activities of ultrafiltration fractions of krill (Euphausia superba) protein hydrolysates [9]. Based on our previous study, the 1–3 kDa fraction exhibited the highest antioxidant activity with a higher content of glutamic acid, aspartic acid, leucine, lysine, and arginine, which may have contributed to its effects. The current study was undertaken to prove the hypothesis that antioxidant peptides in krill protein hydrolysates (KPH) would exhibit protective effects against ethanol-induced oxidative damage in BALB/c mice.

The influence of KPF on serum hepatic marker enzymes in ethanol-induced liver injured mice were investigated. As indicated in Table 1, the levels of AST and ALT were increased in the ethanol-treated group (92.88 ± 4.96 and 24.36 ± 1.21 IU/L) compared to those in the control group, indicating the weakening of liver function in the ethanol-treated group. However, the levels of AST and ALT were significantly (p < 0.05) decreased in mice administrated with different concentrations of KPF. The total serum cholesterol levels in mice after ten days of administration with experimental diets are shown in Table 1. KPF treatment significantly reduced (p < 0.05) the total cholesterol level in serum compared to those of the ethanol group. At a KPF concentration of 100 mg/kg, the total cholesterol level was reduced, reaching a level close to that of the control group and showing no significant difference. However, the activity of KPF at 100 mg/kg was not as strong as that of silymarin when considering all AST, ALT, and total cholesterol levels.

To evaluate the impact of KPF to prevent ethanol-induced hepatic damage, SOD, CAT and, GPx activities were measured in liver homogenates. Figure 4A–C shows the hepatic SOD, CAT, and GPx enzyme activities in the mice following ethanol and KPF administration. Hepatic SOD, CAT, and GPx levels in the ethanol group decreased significantly when compared with those in the control group. However, KPF-treated groups (50 and 100 mg/kg mice) showed significantly increased hepatic SOD and GPx activities due to ethanol-induced hepatic damage when compared with those in the ethanol group. High KPF dose also increased CAT activity when compared with the ethanol-treated group. To understand the underlying mechanism of the protective effects exerted by KPF on ethanol-induced oxidative stress, the protein expression of Nrf2 and HO-1, which are antioxidant-related genes, was examined by western blot analysis. As shown in Figure 4D, the decreased expression of HO-1 protein was observed in the ethanol group, and the protein expression of Nrf2 was also significantly downregulated by ethanol intake. However, KPF (100 mg/kg) or silymarin treatment significantly increased the expression of Nrf2 and HO-1.

RT-PCR was implemented to evaluate the ethanol-induced expression of tumor necrosis factor (TNF)-α and interleukin (IL)-6 in the mouse liver. As shown in Figure 5A, alcohol treatment significantly increased the hepatic expression of TNF-α and IL-6 in mice compared to those in the control group. However, KPF treatment significantly lowered the inflammatory cytokine levels. The intake of alcohol led to liver injury, as indicated by hepatic histopathological changes. As shown in Figure 5B, the presence of slight micro-vesicular steatosis was observed in the ethanol group. However, KPF and silymarin treatment inhibited the alcohol-induced hepatic pathological changes. These data demonstrate that KPF could protect against ethanol-induced liver injury.

4.2. Preparation of Peptide Fraction from KPH by Gastrointestinal Digestion

Krill protein hydrolysate was prepared according to the previously described method by using pepsin according to the previously described method [9]. Briefly, krill dry powder and pepsin at an enzyme/substrate ratio of 1:100 (w/w) were mixed, adjusted to pH 2, and then hydrolysis was carried out under continuous agitation at 37 °C for eight hours. The mixture was then heated in a 100 °C water bath for 10 min to heat-inactivate pepsin. Un-hydrolyzed proteins were removed by filtering through a filter cloth, and the filtrate was fractionated using ultrafiltration membranes to obtain three fractions: <1 kDa, 1–3 kDa, and >3 kDa using a Quixstand bench-top system (GE Healthcare, Buckinghamshire, UK). The 1–3 kDa peptide fraction (KPF) was lyophilized and used for further studies.

Male Balb/c mice (6-week-old, 23–26 g body weight) were obtained from Dae Han Bio Link CO. LTD (Eumseong, Korea). The animals were housed adhering to the Guidelines for Care and Use of Laboratory Animals of Chonnam National University. The animals were acclimated to temperature (22 ± 2 °C) and humidity-controlled (55 ± 5%) rooms with a 12 h light/dark cycle for one week before the experiments. The animals were fed tap water and a standard chow diet, which contain 15% protein, 50% polysaccharides, 7% simple sugars, 3% fat (w/w) energy 3.5 kcal/g. All mice procedures were approved by the Institutional Animal Care and Use Committee of Chonnam National University (No. CNU IACUC-YS-2016-5).

Balb/c mice were randomly divided into five groups (n = 6) with treatment once a day (09:00–10:00) for 10 days: control (saline), ethanol (ethanol 3 g/kg mice), KPF50 (ethanol 3 g/kg + KPF 50 mg/kg mice), KPF100 (ethanol 3 g/kg + KPF 100 mg/kg mice), and silymarin (ethanol 3 g/kg + silymarin 50 mg/kg mice). During the experimental period, the body weights and survival rates were monitored daily (08:00–09:00). The mice were anesthetized after ten days, and blood samples were collected into heparin tubes to determine biochemical parameters. Livers were immediately frozen by liquid nitrogen and stored at –70 °C until analysis. Livers were homogenized in five volumes of ice-cold homogenization buffer (250 mM sucrose, 50 mM Tris-HCl, pH 7.4, 1 mM EDTA). The liver homogenates were centrifuged at 1000× g for 10 min, and the supernatants were centrifuged at 12,000× g for 30 min. The final supernatant protein concentration was measured by the Bradford method using bovine serum albumin as the protein standard [29]. The experimental protocols were approved by the Animal Ethics Committee of Chonnam National University.

Lipid peroxidation concentrations in serum and liver homogenates were determined by measuring thiobarbituric acid reactive substances (TBARS) based on the method in [32]. Briefly, serum or liver homogenates were mixed with thiobarbituric acid (TBA) and incubated in boiling water for 30 min. After centrifugation at 1000× g for 10 min, the resulting colored upper layer was measured at 532 nm. The TBARS concentration was expressed as nmol of malondialdehyde (MDA) per ml serum or mg protein.

4.7. Determination of Antioxidant Enzyme Activity in the Liver

Liver tissues were fixed in 10% (v/v) phosphate buffer formalin and embedded in paraffin wax. The paraffin sections (4–6 μm thick) were segmented, and each was stained using hematoxylin and eosin stain and examined under an optical microscope (Olympus DP70, Olympus Optical Co., Tokyo, Japan) integrated with a camera [34].

The data from the animal experiments are presented as mean ± standard error (SE), and all statistical comparisons were carried out via one-way analysis of variance followed by Tukey’s test using PASW Statistics 19.0 software (SPSS, Chicago, IL, USA). A p-value < 0.05 was considered significant.

This work was supported by the Basic Science Research Program through the National Research Foundation of Korea (NRF) funded by the Ministry of Education, Science and Technology (NRF-2012R1A1A2040566). 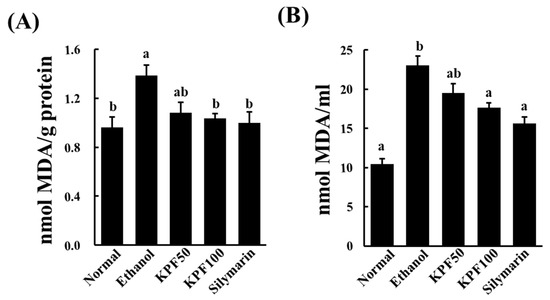 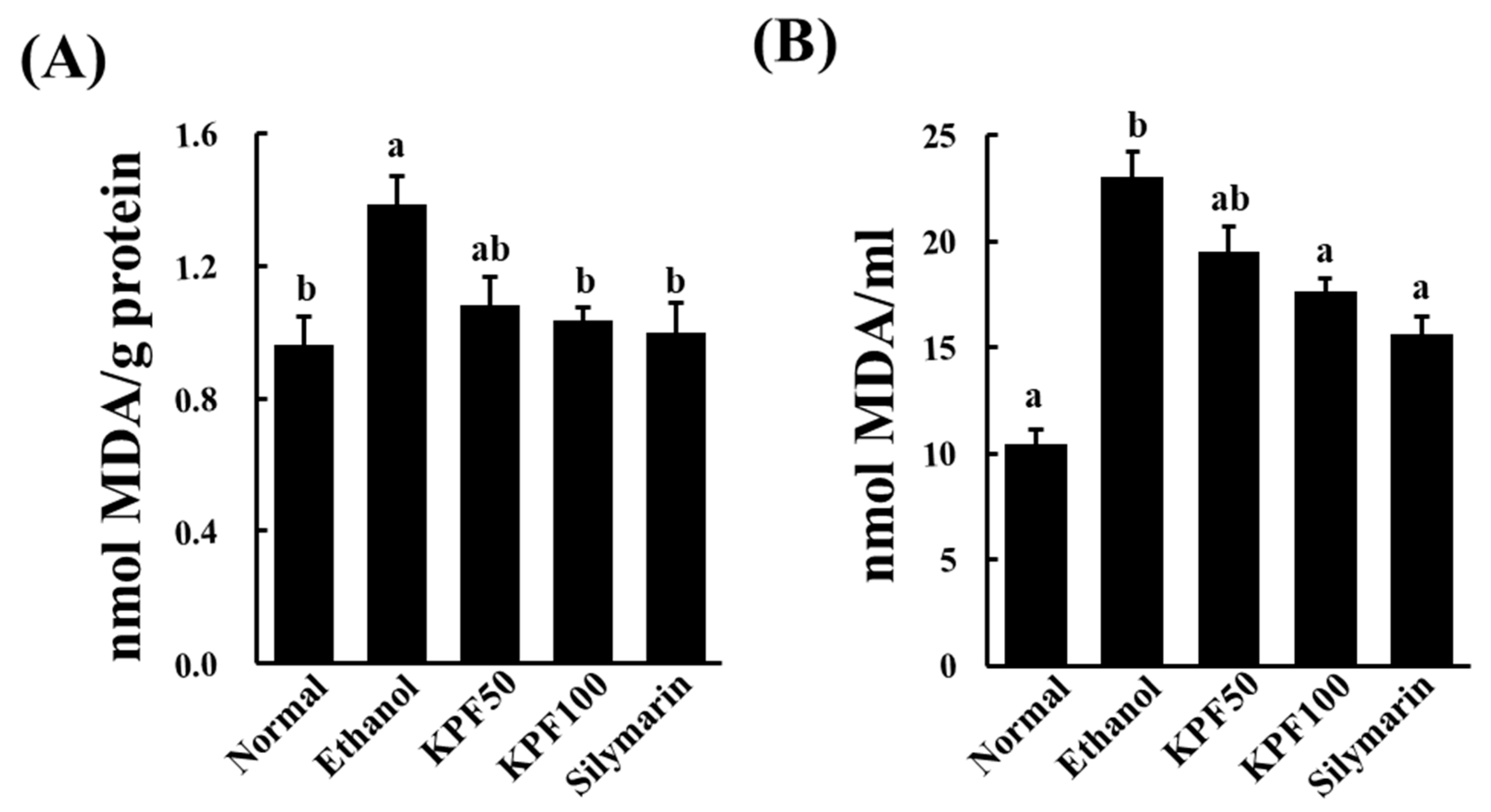 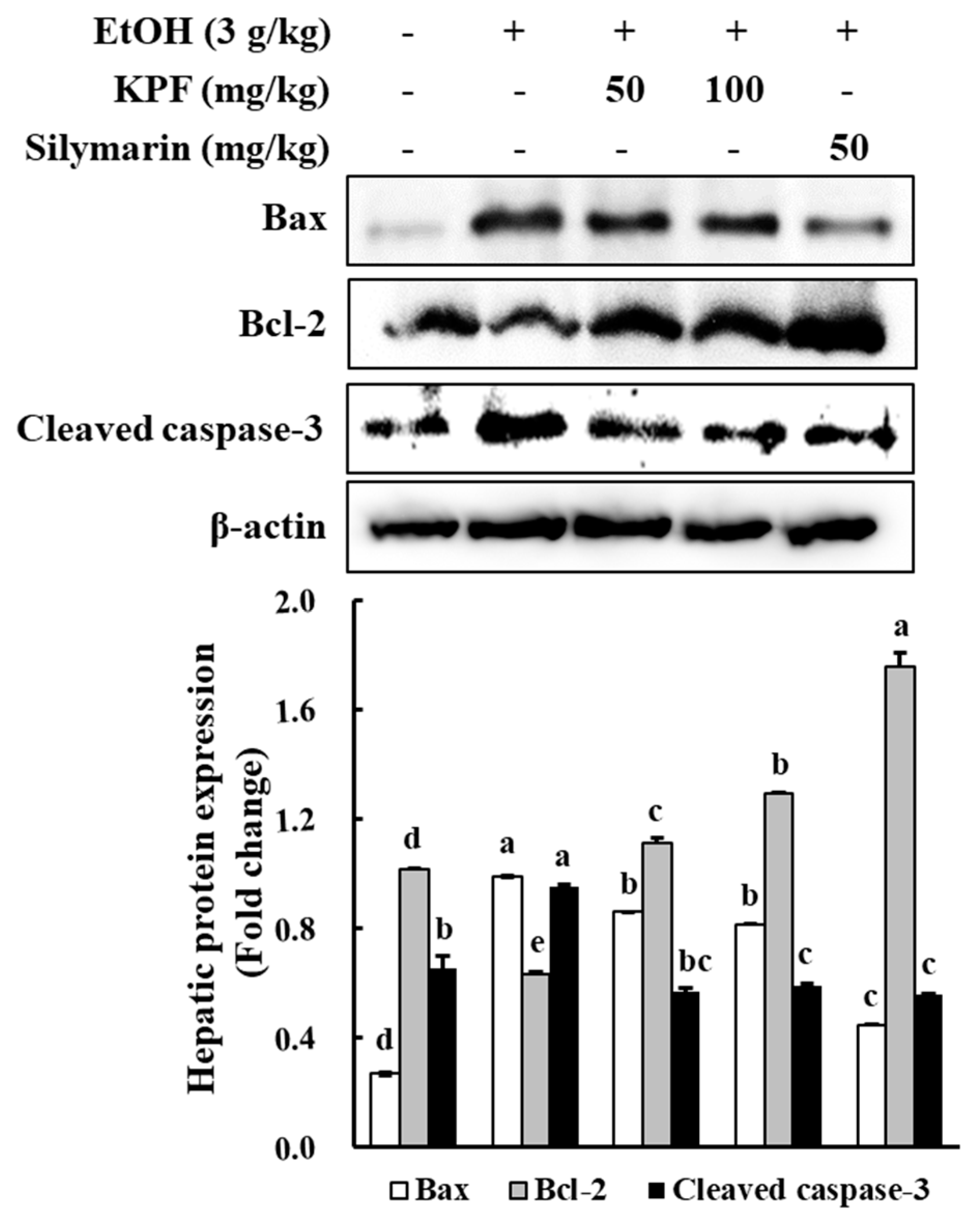 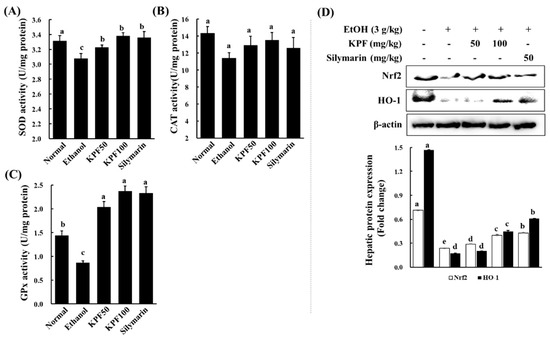