Zebrafish-Based Discovery of Antiseizure Compounds from the North Sea: Isoquinoline Alkaloids TMC-120A and TMC-120B
Next Article in Special Issue

Synthesis and Antitumor Activity Evaluation of Compounds Based on Toluquinol

Five hybrid polyketides (1a, 1b, and 2–4) containing tetramic acid core including a new hybrid polyketide, cladosin L (1), were isolated from the marine fungus Cladosporium sphaerospermum SW67, which was isolated from the marine hydroid polyp of Hydractinia echinata. The hybrid polyketides were isolated as a pair of interconverting geometric isomers. The structure of 1 was determined based on 1D and 2D NMR spectroscopic and HR-ESIMS analyses. Its absolute configuration was established by quantum chemical electronic circular dichroism (ECD) calculations and modified Mosher’s method. Tetramic acid-containing compounds are reported to be derived from a hybrid PKS-NRPS, which was also proved by analyzing our 13C-labeling data. We investigated whether compounds 1–4 could prevent cell damage induced by cisplatin, a platinum-based anticancer drug, in LLC-PK1 cells. Co-treatment with 2 and 3 ameliorated the damage of LLC-PK1 cells induced by 25 μM of cisplatin. In particular, the effect of compound 2 at 100 μM (cell viability, 90.68 ± 0.81%) was similar to the recovered cell viability of 88.23 ± 0.25% with 500 μM N-acetylcysteine (NAC), a positive control. View Full-Text
Keywords: hybrid polyketides; tetramic acid; Cladosporium sphaerospermum; hybrid PKS-NRPS; LLC-PK1 cells hybrid polyketides; tetramic acid; Cladosporium sphaerospermum; hybrid PKS-NRPS; LLC-PK1 cells
►▼ Show Figures 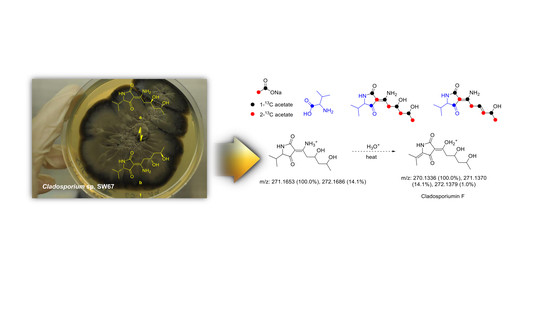