Chemistry and Biological Activities of the Marine Sponges of the Genera Mycale (Arenochalina), Biemna and Clathria
Previous Article in Journal

Triple negative breast cancer (TNBC) is currently the only group of breast cancers without an effective targeted therapy. Marine sponges have historically been a source of compounds with anticancer activity. In this study, we screened extracts from twenty marine sponges collected off the coast of Western Australia for cytotoxic activity against TNBC cells. One very active extract derived from the sponge Monanchora viridis was selected for bioactivity-guided fractionation. Through multiple steps of purification, we isolated a potent cytotoxic compound, which was identified as crambescidin 800 (C800). We found that C800 exhibited cytotoxic potency in a panel of breast cancer cells, of which TNBC and luminal cancer cell models were the most sensitive. In addition, C800 induced cell cycle arrest at the G2/M phase, resulting in a decline in the expression of cyclin D1, CDK4, and CDK6 in TNBC cells. This effect was associated with the inhibition of phosphorylation of Akt, NF-κB, and MAPK pathways, resulting in apoptosis in TNBC cells. View Full-Text
Keywords: crambescidin 800; triple-negative breast cancer; marine sponge crambescidin 800; triple-negative breast cancer; marine sponge
►▼ Show Figures 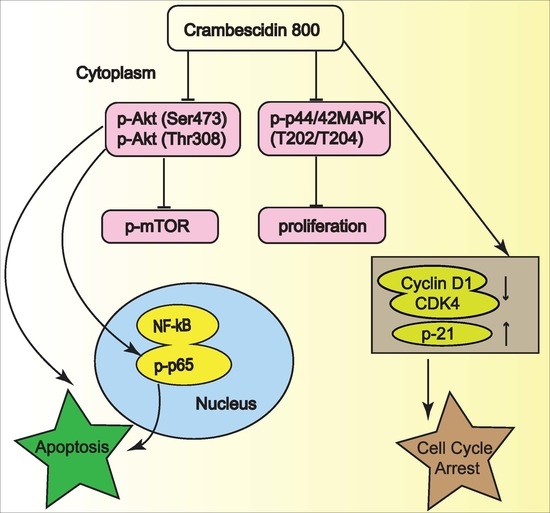