:
The benefit of carotenoids to human health is undeniable and consequently, their use for this purpose is growing rapidly. Additionally, the nutraceutical properties of carotenoids have attracted attention of the food industry, especially in a new market area, the ‘cosmeceuticals.’ Marine organisms (microalgae, seaweeds, animals, etc.) are a rich source of carotenoids, with optimal properties for industrial production and biotechnological manipulation. Consequently, several papers have reviewed the analysis, characterization, extraction and determination methods, biological functions and industrial applications. But, now, the bioaccessibility and bioactivity of marine carotenoids has not been focused of any review, although important achievements have been published. The specific and diverse characteristic of the marine matrix determines the bioavailability of carotenoids, some of them unique in the nature. Considering the importance of the bioavailability not just from the health and nutritional point of view but also to the food and pharmaceutical industry, we consider that the present review responds to an actual demand.
Keywords:
aquaculture; astaxanthin; bioaccessibility; fucoxanthin; humans; marine carotenoids

Carotenoids are a family of natural pigments extensively present in the vegetal kingdom, photosynthetic microorganisms and some fungi, which mains function are their contribution to the light-harvesting process, the filtering of deleterious light radiations and the antioxidant activity. Structurally, carotenoids are isoprenoid compounds that are classified as carotenes (pure hydrocarbons) or xanthophylls (oxygenated carotenes). Both families are the classical tetraterpenoids, that is, C40 carotenoids, whereas apo-carotenoids are the resulting compounds from carotenoid metabolism that shortens the C40 structure of the parent compound (carotene or xanthophyll), while the biosynthesis of C30 carotenoids has been described in bacteria. The lipophilic nature of these compounds, with the resulting attracting yellow to red colours derived from the extensive chain of conjugated double bonds, is the main feature that specifies the modes of interactions with other biomolecules and the environment where these processes take place. Thus, in fruit and vegetal tissues, carotenoids are biosynthesized in plastids which present their own organelle membrane and behave in a lipophilic environment with other biomolecules. Consequently, the subsequent tissues where carotenoids may incorporate and develop further activities should resemble in a similar way either a membrane macrostructure or a lipophilic surrounding.
Carotenoids significantly contribute to the nutritional value of natural sources where they occur including fruit and vegetables, algae, eggs and fish [1]. This is due to the exclusive dependence of animals on diet to incorporate these compounds to inner tissues and systemic circulation where they develop significant functions and biological activities. Around 10% of the described carotenoids in nature present the structural requisites to be metabolized in vitamin A [2]. In addition, all carotenoids exert important functions in immunity, participate in the antioxidant defence system and are related with a reduced risk of developing chronic diseases [3,4]. These biological activities are the elements to provide evidence of the inverse association between the intake of carotenoid-containing fruits and vegetables or elevated serum carotenoid levels with risk for various chronic diseases [5,6,7,8,9,10].
In comparison with the attained knowledge regarding the structural features, physio-chemical properties and biological functions and actions of the carotenoids biosynthesized in terrestrial organisms, the progress made with the carotenoids from marine surroundings advances with a lower rate so far. This circumstance is at least surprising considering that the highest structural diversity is found in the carotenoids from marine environments, even some of them (the acetylenic carotenoids) seem to be restricted to aquatic sources [11]. The puzzling structural arrangements arise from the lively biosynthetic micro- and macro-algal species and, to a lower extent, from photosynthetic and non-photosynthetic marine bacteria. From these organisms where the de novo biosynthesis starts, two additional steps of structural transformations are possible, one in the herbivorous animals that live in symbiosis with the former microorganisms and show active transformation routes for carotenoids and subsequently in the carnivorous animals [12]. This attractive natural product chemistry has been the subject of interesting reviews [12,13,14,15], which suggest the existence in marine animals of further new structural arrangements with interesting resulting functions, as well as metabolic pathways coupled with their enzymatic systems that need to be unravel. Although those issues will provide new research topics in the upcoming future, it should be noted that some constraints apply to the idea of incorporating new carotenoid structures to our diet because of enhanced health properties or even new ones. Thus, the practical convenience of the marine source where such novel assemblies are biosynthesised, the toxicological issues both of the ‘new bioactive’ and the matrix and the bioaccessibility and bioactivity in vivo are boundaries that arise in this prospect. Therefore, within the group of ca. 40 different carotenoids that we can obtain from the diet, marine carotenoids limit to fucoxanthin and astaxanthin and their corresponding metabolites that accumulate in the edible tissues of aquatic animals, algae or in microorganisms. In addition, seafoods are also a potential source of β-carotene, β-cryptoxanthin, lutein and zeaxanthin although those foodstuffs find straight competitors in the conventional fruits and vegetables. In addition, a current key piece of knowledge to establish the actual contribution of carotenoids to human health is the study of the bioaccessibility. This concept observes the entire sequence of events that take place during the digestive transformation of food into material that can be assimilated by the body, the absorption/assimilation into the cells of the intestinal epithelium and the pre-systemic metabolism [16]. The factors affecting bioaccessibility of carotenoids are grouped within food structure, food matrix and processing features, physiological issues and genetic and host-related aspects, which have been the common thread in recent reviews [17,18] and are depicted in Figure 1.
Taking both topics into account, this review comprehends those significant contributions made to date regarding the bioaccessibility issues of those marine carotenoids we can readily obtain from available dietary sources or from supplements. In vitro experiments and in vivo studies, either with animal models of with humans applied to fucoxanthin and astaxanthin have provided several hints of their absorption, metabolism and tissue distribution. Hence, pharmacokinetic parameters and some transformation routes have been unravelling or at least tentatively denoted and a significant amount of data has been produced, which it is evaluated in this revision. References to other carotenoids that we can obtain from marine source but that have their ‘terrestrial sources’ counterparts are also acknowledged. Finally, and considering the meaning of aquaculture practice and that bioaccessibility of marine carotenoids to farmed animals is a topic that is in continuous progress, a section is focused on bioaccessibility of marine carotenoids in aquaculture.

4. Bioaccessibility of Other Marine Carotenoids

The range of applications of microalgae as source of carotenoids is not limited to astaxanthin-based products but also to the manufacture of supplements with biologically active carotenoids like β-carotene, lutein and zeaxanthin with significant contributions to human health [118] that enter in the nutrition and supplement market, which is expected to reach 220 $ billion globally in 2022. Although consolidated regulations regarding the safety, labelling and market issues exist in most countries, aimed to keep public health questions and guarantee the quality of this kind of products, there is a lack of research in the nutritional efficiency of the micronutrients and bioactive compounds contained in the supplements. Consumers depend on labelling to know the amount of the component(s) intended to supplement the diet but that amount may significantly differ from the quantity that is absorbed and reaches the systemic circulation, that is, bioaccessibility is not measured while it is assumed that there is equivalence between the bioactive content and the biological relevance [118]. However, the veracity of that equivalence is unclear and the recent scrutiny of bioaccessibility through in vitro protocols has started to show that there is a full catalogue of factors that drive the efficiency of the digestion and absorption processes. These factors include host-related physiology and metabolism that it is highly variable between subjects, characteristics of the co-ingested food with the supplement that promote interactions either positive or negative in the final digestion/absorption outcome and factors related with the physico-chemical properties of the bioactive as well as the featured matrix where it is formulated. Hence, it has been shown that the human plasma response for β-carotene after the three-days ingestion of Dunaliella salina gel caps was significantly lower than the observed when water-dispersible synthetic β-carotene beadlets were ingested for the same period [119]. The carotenoids of the microalgae Scenedesmus almeriensis showed a poor in vitro digestibility (<1% of the total content were incorporated into mixed micelles), so that the direct consumption of the biomass is not the suitable way to obtain a significant absorption [120]. Following, the authors described that once the biomass was extracted with olive oil, almost 90% of the carotenoid content was successfully transferred to the micelles in vitro, pointing to the exceptional influence of the lipid environment in the efficiency of bioaccessibility of carotenoids. Such strategy was applied to measure the in vivo bioaccessibility of β-carotene, astaxanthin and lutein from algae biomass of Spirulina platensis, Haematococcus pluvialis and Botryococcus braunii, respectively in rat model. The postprandial plasma responses were significantly different for astaxanthin that accumulated higher than β-carotene and lutein, although these carotenoids also showed enough circulating levels in plasma to consider the corresponding olive oil extracted biomass as a suitable source [101].

5. Bioaccessibility of Carotenoids for Aquaculture

I.V., A.P.-G. and M.R. have contributed equally to the conceptualization, investigation, writing, review and editing of this manuscript. 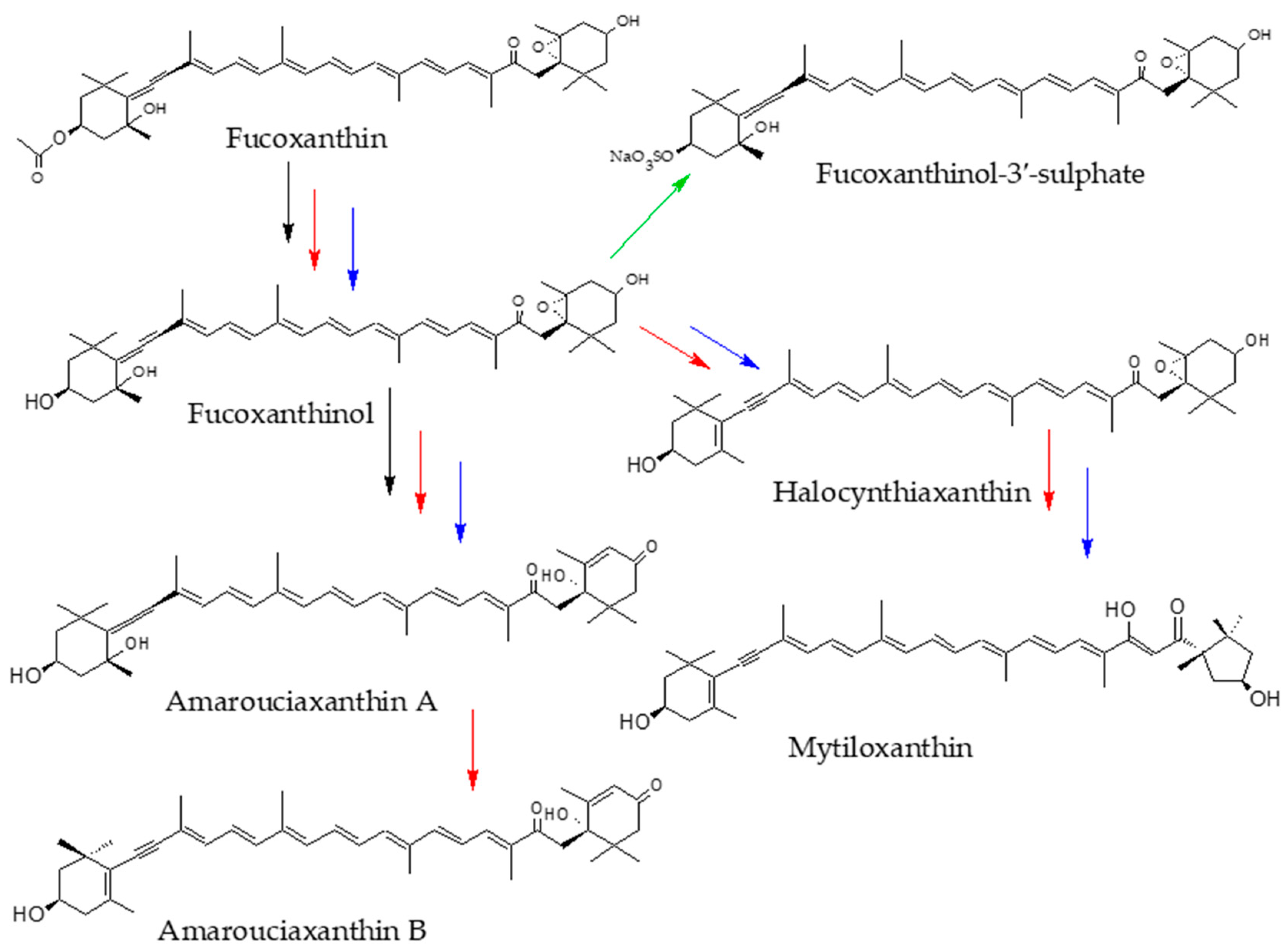