Single and Competitive Adsorption of 17α-Ethinylestradiol and Bisphenol A with Estrone, β-Estradiol, and Estriol onto Sediment

EDCs are compounds that disrupt wildlife’s reproductive system by imitating and blocking the activity of natural hormones [1]. The synthetic EDCs 17α-ethinylestradiol (EE2) and bisphenol A (BPA) are frequently found in wastewater, marine water, and sediments [2,3]. EE2 is generally used in contraceptive pills [4]. Because of the long half-life, the toxicity of EE2 in fish was determined to be 10–50 times greater than estrone (E1) and β-estradiol (E2) [5]. EE2 usually finds its way into the surface water via the wastewater. After entering the water, EE2 is absorbed by sediments until equilibrium is achieved and, then, the excess EE2 is again released into the water. Previous investigations observed high concentrations of EDCs in sediments and to a lesser extent in air and drinking water [6]. BPA is mainly used as a synthetic plasticiser in the chemical industry and exhibited estrogenic active even at micrograms per litre concentrations [7]. E1, E2, and E3 are mainly released by excreta of human and livestock, and were able to reverse the gender of aquatic animals even at low concentrations (µg/L) [8,9]. Due to the disorderly discharged sewage and residues from conventional wastewater treatment plants, the EDCs are transferred into the sediment-water system [10]. Furthermore, manure spreading worsens EDC transfer into the sediment-water system [11]. Despite the fact that most of the EDCs in wastewater and manure can be removed via various treatment processes, the remaining concentration still is larger than the maximal theoretical safe concentration.
Increasingly, studies have been conducted that focussed on the behaviour of EDCs in sediment/water [12,13,14]. To better understand the adsorption in sediment, the distribution and accumulation of EDCs were studied in sediment-water by researchers [15]. Recently, Sun et al. [16] studied the adsorption of EDCs onto different size fractions of sediment. Card and co-workers evaluated and predicted the adsorption behaviour of hormones in sediment [17]. The adsorption of four different EDCs was investigated in a sediment-water system, and the environmental fate of EDCs was studied by Li et al. [18]. Although the aforementioned studies examined the distribution and adsorption of EDCs in a sediment-water system, competitive adsorption of multiple EDCs in such a system and the selectivity of the sediment were not explored in detail to date.
In the current study, EE2 and BPA were set as the research targets; and the natural EDCs (E1, E2, and E3) were set as the interferents. The objectives of this work were to: (1) determine the primary and interaction effect of coexisting EDCs on EE2 and BPA in binary and multiple competitive adsorption systems; (2) to estimate the adsorption capacity of EDCs in binary systems; and (3) to estimate the selectivity of the sediment for binary and multiple EDCs in the adsorption process. The study aims to provide a theoretical foundation for the adsorption of multiple EDCs in a water-sediment system.

2.1. Differences in Adsorption Capacity of EE2 and BPA in the Binary System 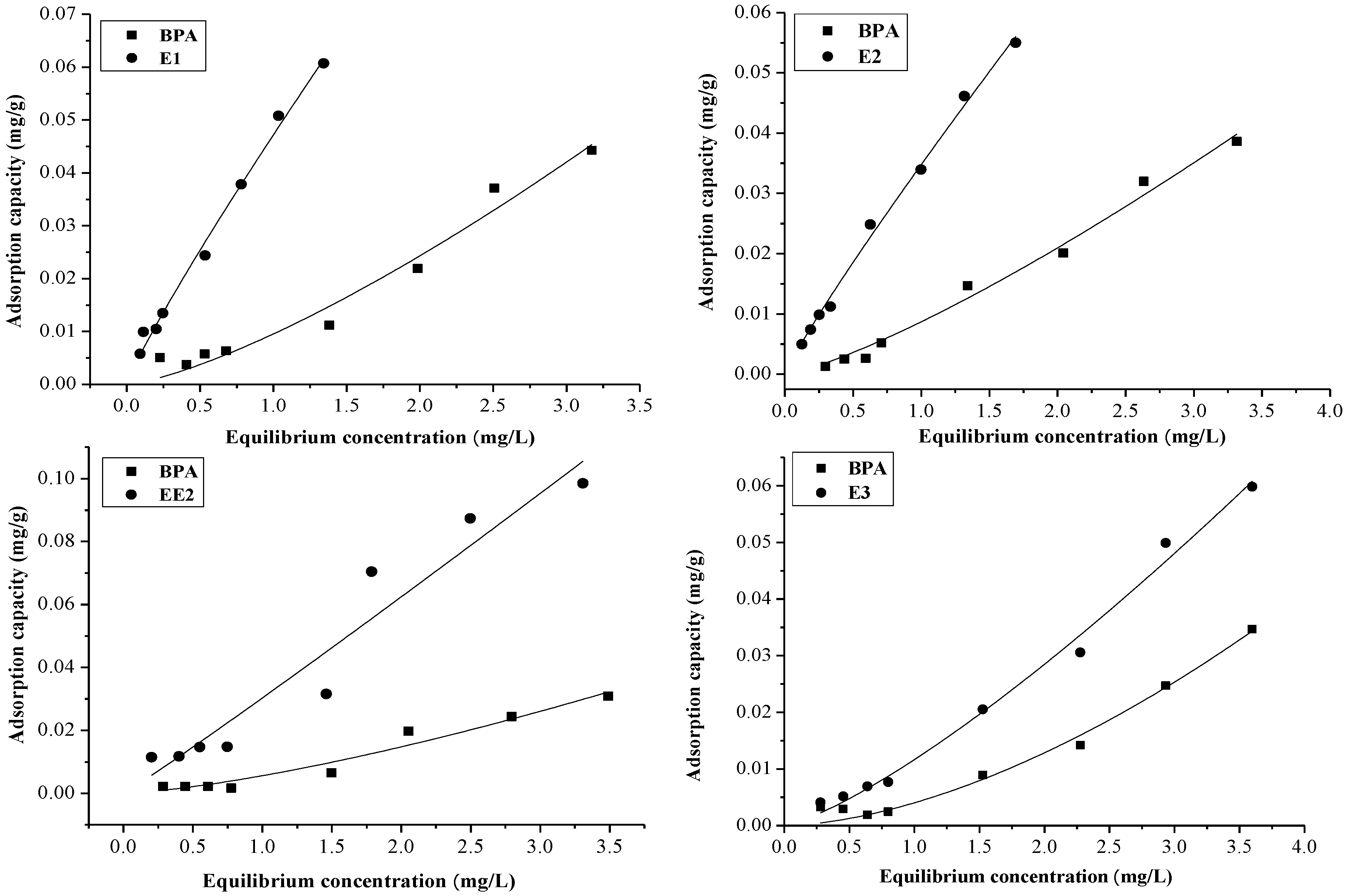 2.2. The Differences of Adsorption Capacity of Multiple EDCs

2.2.1. The Adsorption of BPA and EE2 in a Ternary EDCs System

The values of tan θ are shown in Table 2. The results in Table 2 show that, for BPA, tan θ of the ternary EDCs system are all positive, which suggests that the coexisting EDCs synergistically affected the adsorption of BPA. According to the tan θ values, this synergistic effect of coexisting EDCs could be induced according to the following sequence: E1*E3 > E2*E3 > E1*E2 and E1*EE2 > E2*EE2 > EE2*E3. For EE2, the synergistic interaction of coexisting EDCs were in the following order: E2*BPA > E1*E3 > E2*E3 > E1*BPA. The antagonistic effect of coexisting EDCs were as follows: E1*E2 > E3*BPA, which confirms that E1*E2 and E3*BPA restrained the adsorption of EE2 and the extent of restraining was: E1*E2 > E3*BPA.

Table 2. The variation of adsorption capacity of BPA and EE2 in a ternary EDCs system.

2.2.2. The Adsorption of BPA and EE2 in a Quaternary EDCs System

To better understand the effect of interaction of coexisting EDCs, the adsorption of BPA and EE2 in a quaternary system were studied (Table 3).

2.2.3. The Adsorption of BPA and EE2 in a Quinary EDCs System

Table 4. The variation of adsorption capacity of BPA and EE2 in a quinary EDCs system.

2.3. Selectivity of Sediment for EDCs

2.3.1. Selectivity of Sediment for EDCs in a Binary System

2.3.2. The Selectivity of Sediment for EDCs in a Ternary System

2.3.3. The Selectivity of Sediment for EDCs in a Quaternary and Quinary System

The sediment samples used in this study were directly collected from a depth of 0–5 cm near the Songhua River in Jilin City, China.

A 5.0 mg/L standard solution of E1, E2, EE2, E3, BPA, and two co-existing EDCs was prepared. Batch experiments were conducted to investigate the adsorption behaviour of the EDCs. For each determination, 0.7 ± 0.0001 g of the surface sediments (SSs) was mixed with 40 mL of the EDCs solution at different concentrations; the concentrations of the EDCs were 0.4, 0.6, 0.8, 1.0, 2.0, 3.0, 4.0, and 5.0 mg/L, respectively. The solutions contained different EDCs and 200 mg/L of NaN3 to minimise biological activity. NaOH and HCl (both 0.1 mol/L) were used to set the pH to 6.70 ± 0.03. The conical flask was placed in a shaker for 24 h at room temperature. Each sample was filtered with a 0.45 µm membrane filter and transferred into 2 mL amber vials for high performance liquid chromatography (HPLC) analysis. Duplicate experiments were conducted to account for experimental error and to investigate the reproducibility of the results. A blank experiment was performed as a control.

Figure 6 describes the isotherms for two conditions: line 1 is the isotherm of compound A in a single adsorption system, and line 2 is the isotherm of compound A coexisting with B in the binary system. There is an acute angle between line 1 and line 2. To quantify the differences between EDCs under a variety of conditions, the acute angle was calculated using the following equation.
tan θ = (k2 − k1)/(1 + k1 × k2)
where k1, k2 are the gradients of line 1 and 2, respectively. Theta (θ) is the angle between line 1 and 2, which indicates the changes in adsorption capacity under two different adsorption conditions. The results show that tan θ was in the range of −1 to 1. The negative value of tan θ shows the competitive effect of coexisting compounds on the target compound, whereas positive values of tan θ show the advanced effect of coexisting compounds on the target compound.

3.6. The Selectivity of Sediment for EDCs

D = V/m (ρ0/ρt − 1)
Β = Da/Db
where D is partition ratio between the sediment and water, V is the volume of EDCs solution (L), ρ0 is the concentration of original solution (mg/L), and ρt is the solvent concentration when the adsorption reached equilibrium (mg/L), m is the quality of sediment (g). B is the partition coefficient between two components.

The interaction effect of coexisted EDCs on BPA and EE2, and the order of adsorption capacity of BPA and EE2 in binary and multiple adsorption systems were investigated. Additionally, the adsorption selectivity of sediment for EDCs and the influence of different initial concentrations was determined, based on the distribution coefficient (β). The following conclusion can be drawn:

(1)
The order of selectivity is accordance with the adsorption capacity (E1 > EE2 > E2 > E3 > BPA) showed the adsorption of EDCs in sediment is dominated in physical adsorption.
(2)
The EDCs in ternary and quinary system shows a high selectivity of sediment.