Molecular Pathogenesis of Endotheliopathy and Endotheliopathic Syndromes, Leading to Inflammation and Microthrombosis, and Various Hemostatic Clinical Phenotypes Based on “Two-Activation Theory of the Endothelium” and “Two-Path Unifying Theory” of Hemostasis
Previous Article in Journal

Asthma is a chronic disorder of the airway characterized by airway inflammation, a complex interaction of airflow obstruction, and bronchial hyper-responsiveness. Allergic asthma is characterized by goblet cell hyperplasia, subepithelial fibrosis, and smooth muscle hypertrophy [1]. Allergens, air pollution, cigarette smoke, ozone, and other environmental factors can increase the risk of acquiring respiratory disorders [2,3].
Air pollution has been shown to negatively impact human cardiopulmonary health. Diesel exhaust particulate matter (DEPM) is a major component of particulate matter (PM). DEPM consists of gaseous and aerosol phases that include a variety of hazardous chemicals. In June 2012, DEPM was classified as a group 1 human carcinogen. Metals such as zinc and copper, as well as polycyclic aromatic hydrocarbons such as anthracene, naphthalene, and benzo(a)pyrene, can be found on the surfaces of these fine particles [4]. DEPM increases chemokine production in inflammatory diseases such as asthma (Jin et al., 2020). DEPM stimulates T helper (Th) type 2 cells and the secretion of Th-2 cytokines, including interleukin (IL)-4, IL-6, IL-10, and IL-13, and increases immunoglobulin (Ig) E levels [5]. These cytokines can result in airway inflammation, mucus production, bronchial smooth muscle contractions, and the activation of neutrophils, eosinophils, and macrophages [6].
Since their debut in the market, inhaled corticosteroids have been the cornerstone of asthma treatment. Despite the efficacy of inhaled corticosteroids, certain patients may experience drug-related side effects such as dysphonia and thrush [7]. Therefore, new options are being explored, and one of them may be the use of probiotics to prevent asthma [8]. Probiotics have been proven to have immunomodulatory properties and play a role in the pathophysiology of various diseases [9,10]. Lacerda et al., 2021 reported that lactic acid bacteria (LAB) reduced the overall burden of airway allergic inflammation in murine models of asthma [11]. The beneficial effects of the oral administration of probiotics, including Lactobacillus (L.) gasseri, L. fermentum, L. casei, L. rhamnosus, L. salivarius, and Bifidobacterium lactis, in murine models of asthma have been reported in many studies [12,13,14,15,16]. Furthermore, Carvalho et al., 2020 reported that L. rhamnosus improved the lung inflammatory response associated with cigarette smoke by modulating the balance between pro- and anti-inflammatory cytokines [17].
In a previous study, we verified the safety of Weissella cibaria strains CMU (Chonnam Medical University) and CMS (Chonnam Medical School) 1 and demonstrated their anti-inflammatory effects in vitro [18,19]. In addition, W. cibaria strains CMU and CMS1 have shown anti-microbial and anti-biofilm activities against upper-respiratory-tract-infection-causing pathogens [9]. Therefore, in this study, we investigated the therapeutic efficacy of W. cibaria CMU and CMS1 in inflammatory and asthmatic responses using a murine asthma model exacerbated by DEPM.

SRM 2975 is a DEPM collected from a diesel-powered industrial forklift. After preparing the DEPM suspension solution (1 mg/mL) in sterile phosphate-buffered saline (PBS), the DEPM solution was sonicated for 2 min using a sonicator (Sibata; OGAWA SEIKI, Tokyo, Japan) to minimize the aggregation of PM.

W. cibaria strains CMU and CMS1 were provided by OraPharm, Inc. (Seoul, Korea). The strains were cultured in De Man, Rogosa, and Sharpe (MRS) broth and agar medium (Becton-Dickinson, BD, USA) at 37 °C for 24 h. After the centrifugation (8000× g for 20 min at 4 °C) of the bacterial cells, the pellet was washed twice with sterilized PBS. To adjust the appropriate density for the experiment, live W. cibaria CMU and CMS1 were quantified using the plate count method on MRS agar.

The mice were given a week to acclimate before the experiments. Five-week-old male BALB/c mice (20 ± 2 g) were housed in a room with controlled temperature (21 ± 2 °C) and humidity (50 ± 5%) under a 12 h light/dark cycle with free access to food and water. All animal experiments were approved by the Institutional Animal Care and Use Committee of Chungbuk National University (approval no. “CBNUA-1526-21-01”; approval date. “1 April 2020”). Intranasal treatment with the DEPM solution was followed by a conventional 21-day, OVA-sensitized murine asthma model. Seven days after acclimatization, eight mice per group were divided as follows: negative control (NC), positive control (PC), Synatura, CMS1-low, CMS1-mid, CMS1-high, CMU-low, CMU-mid, and CMU-high groups. For sensitization, 200 μL of aluminum hydroxide (Al(OH)3) saline (1:1) containing 100 μg of OVA (Grade V, Sigma-Aldrich) was injected intraperitoneally to all mice except for the NC group on days 0 and 12 (saline was injected intraperitoneally to the NC group). On days 19 and 20, all groups, except the NC group, were challenged with OVA (25 μg/20 μL per mouse) by intranasal instillation (the NC group was challenged with 20 μL of saline). After the last OVA challenge, 20 μL of DEPM solution (200 μg/20 μL per mouse) was challenged via intranasal instillation in all groups three times over a 3 h interval. The NC group was challenged three times, over a 3 h interval, with 20 μL of PBS via intranasal instillation. Mice were fed either W. cibaria CMS1 (CMS1-low: 2 × 107, CMS1-mid: 2 × 108, and CMS1-high: 2 × 109 colony forming unit (CFU)/mouse), W. cibaria CMU (CMU-low: 2 × 107 CFU/mouse, CMU-mid: 2 × 108 CFU/mouse, and CMU-high: 2 × 109 CFU/mouse), and Synatura (200 mg/kg; Ahn-Gook Pharmaceuticals Co., Seoul, Korea) or the same volume of PBS (NC and PC) by oral administration from day 0 to day 20. Synatura was used as the active control. The experimental design is illustrated in Figure 1.

To measure the levels of IL-1β, IL-4, IL-6, IL-10, IL-12, IL-13, MCP-1, TNF-α, IFN-γ, and OVA-specific IgE in BALF, ELISA kits (Invitrogen) were used, according to the assay protocol provided by the supplier. All samples and standards were tested in triplicate. Absorbance was measured at 450 nm using a Tecan Sunrise ELISA reader (Männedorf, Switzerland). The concentration of each cytokine was calculated from the standard curve of each cytokine standard.

After the excision of the left lung lobes, the tissues were fixed in 10% neutral-buffered formalin for 24 h. Fixed tissues were sectioned at a thickness of 4 μm after dehydration and paraffin embedding. Tissue sections were then stained with hematoxylin and eosin (H&E) for histological analysis and periodic acid–Schiff (PAS) staining for the histochemical analysis of mucus production. Histological images were obtained using a Slideview VS200 Scanner (Olympus, Tokyo, Japan), and the pulmonary lesions were analyzed based on the scoring criteria on a scale ranging from 0 to 3 (Table 1, Supplementary Figure S1).

3.1. Effects of W. cibaria CMU and CMS1 on the Weight of Spleen, Liver, and Lungs in a DEPM-Exacerbated Murine Asthma Model

3.3. Effects of W. cibaria CMU and CMS1 on Histopathological Changes Exacerbated by DEPM

Histopathological changes and mucosal hyperplasia in the lung tissues were determined using H&E (Figure 4) and PAS staining (Figure 5). Compared to the NC group, moderate to severe bronchiolar changes, including mucosal hyperplasia (goblet cell hyperplasia), subepithelial fibrosis, and epithelial detachment, were observed in the PC group. Lymphocytic infiltrates in the submucosa and smooth muscle area were also observed. In addition, the increased infiltration of inflammatory cells, including lymphocytes, macrophages, and occasional eosinophils, was observed in the peribronchiolar and perivascular lesions. However, bronchiolar changes and inflammatory cell infiltration were significantly alleviated in the CMS1-low, CMU-low, CMU-mid, and CMU-high groups. These improved pathological lesions were comparable to those observed in the Synatura group. Pathological changes intensified with increasing doses of CMS in the CMS-mid and CMS-high groups compared to the CMS1-low group. Consistent with the histopathological lesions, we found an increase in mucus production with the hyperplasia of goblet cells in the PC group compared with that in the NC group via PAS staining. However, mucus production and goblet cell hyperplasia decreased in the Synatura, CMS1-low, CMU-low, CMU-mid, and CMU-high groups.

3.4. Alleviating Effects of W. cibaria CMU and CMS1 on Bronchiolar and Inflammatory Changes Exacerbated by DEPM

The results of bronchiolar changes are shown in Figure 6. The W. cibaria CMU group scored significantly lower than the PC group, regardless of the dose concentration (p < 0.05), whereas in the W. cibaria-CMS1-administered group, the CMS1-low and CMS1-mid groups showed asthma improvement (p < 0.05). No effects were observed in the CMS1-high group. Inflammatory cell infiltration evaluation also showed that, similar to bronchiolar changes, the CMU-administered group showed significantly lower scores compared to the PC group, regardless of the dose concentration, and showed asthma improvement efficacy (p < 0.05). In the CMS1-administered group, only the CMS1-low group showed an improvement in asthma (p < 0.05) (Figure 6).

The following supporting information can be downloaded at: https://www.mdpi.com/article/10.3390/medicina58091310/s1, Figure S1: Identification of inflammatory cells in higher magnification image.

This research was funded by the Korea Institute of Planning and Evaluation for Technology in Food, Agriculture, Forestry (IPET) through the Useful Agricultural Life Resources Industry Technology Development Program, funded by the Ministry of Agriculture, Food and Rural Affairs (MAFRA) (No. 120050-2), the Basic Science Research Program of the National Research Foundation of Korea (No. 2020R1F1A1069551), and the Ministry of Science and ICT (MSIT) of Korea.

This study was approved by the Institutional Animal Care and Use Committee of Chungbuk National University (approval no. CBNUA-1526-21-01; approval date. “1 April 2020”). 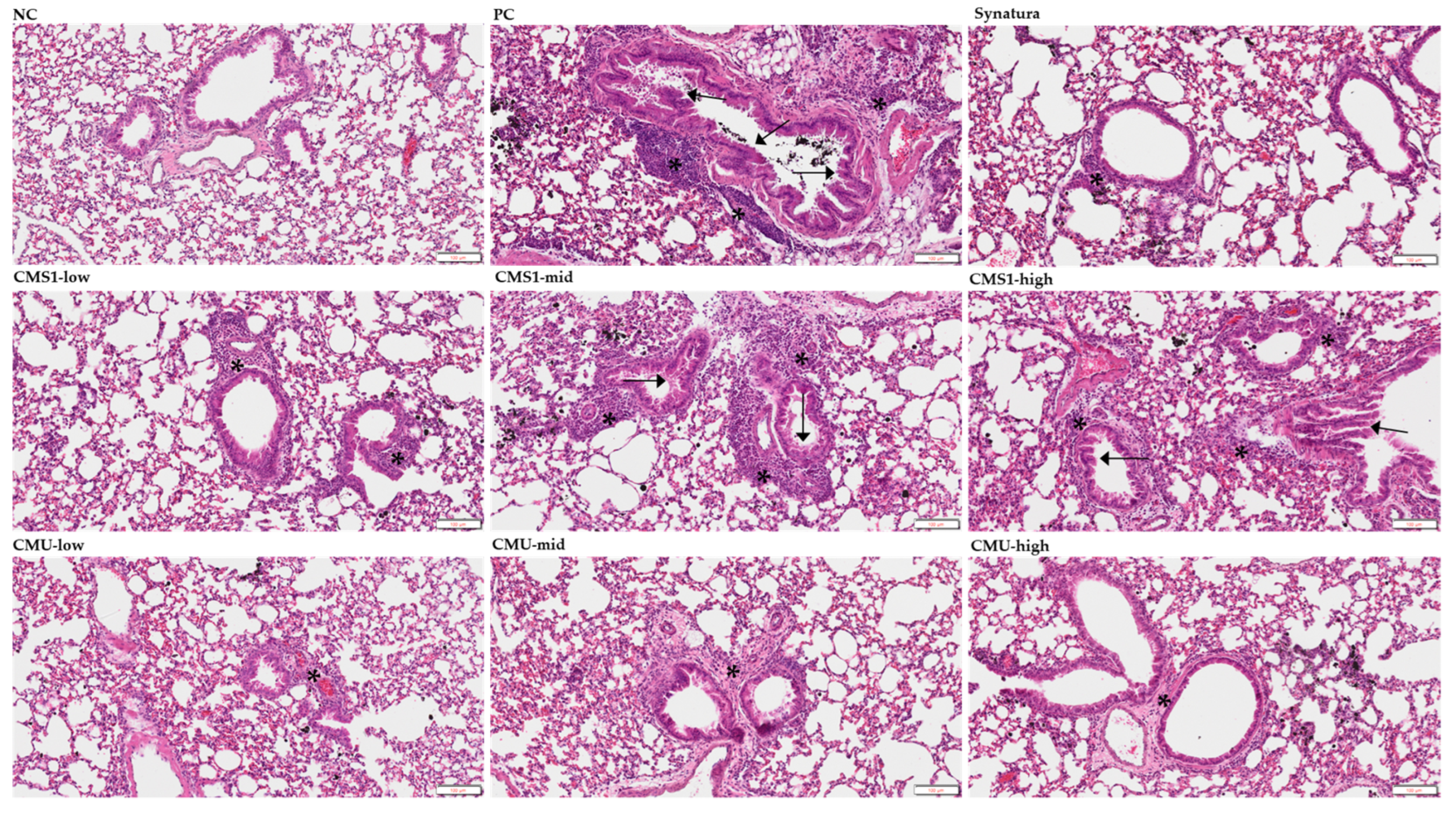 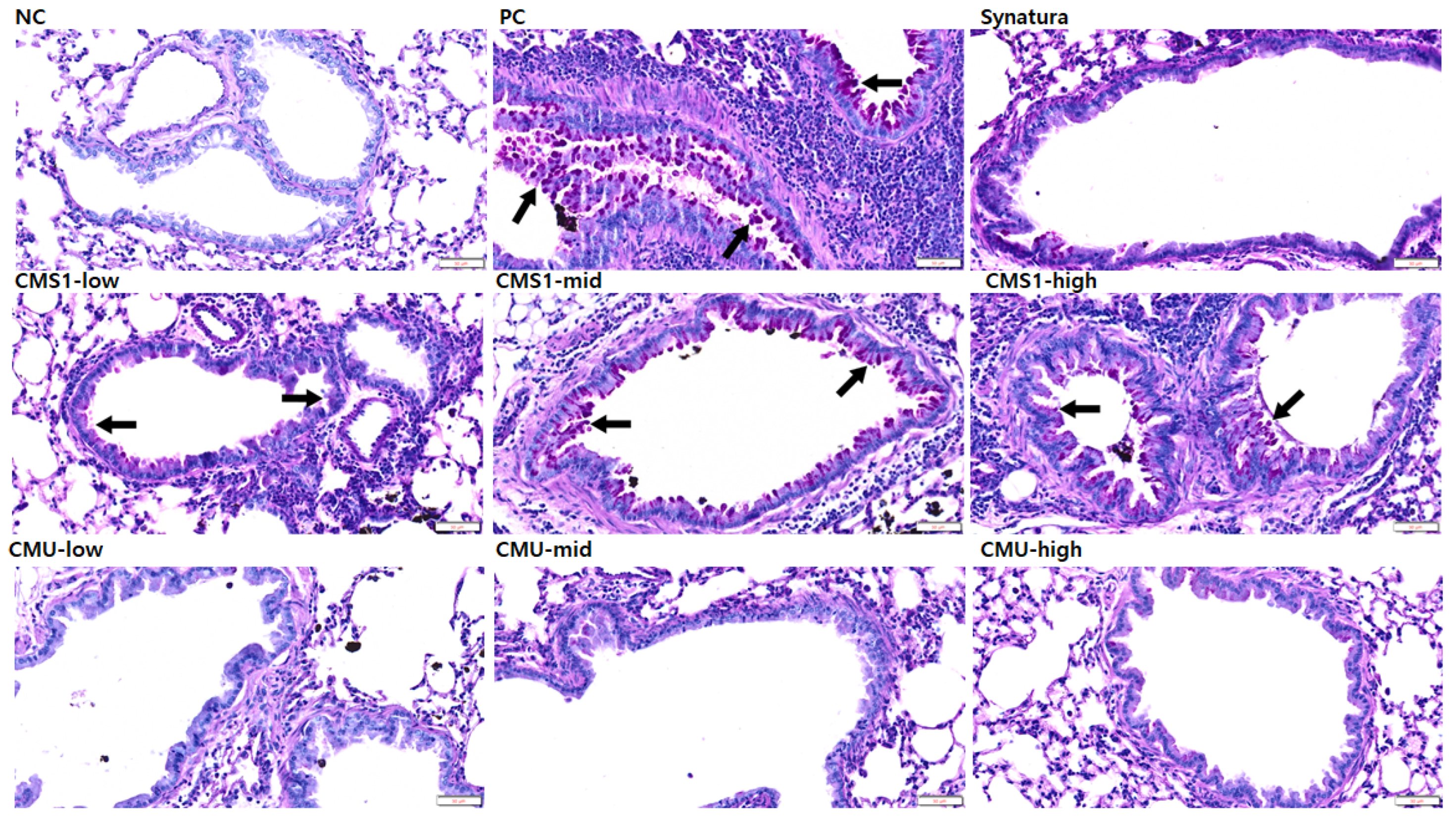