Neuroadaptability and Habit: Modern Medicine and Ayurveda
Next Article in Special Issue

Variant Anatomy and Its Terminology

Background and Objectives: Choanal atresia is the most common congenital malformation of the nose. Materials and Methods: We have evaluated 24 CT images of children with choanal atresia treated at the Department of Pediatric Otorhinolaryngology FM CU and the NICD Bratislava (Slovakia). In accordance with the methodology used by Slovis et al. (1985), we have measured parameters related to anomalous development in the nasal cavity: vomer width, the width of soft atresia and the width of the air space of unilaterally developed choana. Results: In the group of 24 patients, 11 (46%) were male and 13 (54%) were female. The age of patients at the time of CT imaging varied. Associated syndromes had been manifested in 11 (46%) children, with 7 (29%) patients having CHARGE syndrome. In 13 (54%) cases it was a bone membranous type of atresia, in 8 (33%) cases a membranous type, and in 3 (13%) patients a bone type. Among the group of patients, unilateral disorder was present in 13 (54%) patients and bilateral in 11 (46%). Based on the Pearson’s correlation test, we have found in the studied group that the width of the vomer correlates with age, and the vomer is wider in bone atresia than in the membranous ones. Based on determining the average vomer’s width within the age groups 0–8 and >8–20, compared to the standard widths, we found that the vomer’s widths reached the upper limits of the standard ±2 SD (cm) or even exceeded that limit. The same applies to the width in soft choanal atresia. On the other hand, the width of the developed choana in the case of unilateral atresia is almost standard. Conclusions: The above findings are the basis for selecting the appropriate type of surgery. Currently, the gold standard is the endoscopic fenestration. associated with posterior septotomy.
Keywords: choanal atresia; CT imaging; measurement of parameters choanal atresia; CT imaging; measurement of parameters

Choanal atresia is the most common congenital malformation (CM) of the nose with an incidence of 1:5000 to 1:7000 live births [1,2]. It is more common for females. Within the classification of nose CMs, according to Losee et al. (2004) [3], it falls under Type I (Table 1). In 50% of cases, it is associated with other congenital anomalies characterized by craniofacial dysmorphia, such as CHARGE syndrome, Treacher-Collins syndrome, Crouzon syndrome, Vater syndrome, Apert syndrome, Down syndrome, Edwards, Pfeiffer and Antley–Bixler syndromes [3,4,5]. Depending on the cause, the choanal atresia may be congenital or acquired; depending on its composition, it may be bone, membranous, or both; depending on the location—unilateral or bilateral, when unilaterally affected, right-sided or left-sided; and depending on the extent—complete or partial.
So far, there is no uniform theory on the cause of choanal atresia development. Hengerer and Strome (1982) [6] defined four embryological theories:

(1)
persistence of the buccopharyngeal membrane forming the bottom of the stomodea,
(2)
persistence of the Hochstetter nasobuccal membrane and failure of its perforation in the seventh week of intrauterine life,
(3)
abnormal occurrence of mesoderm forming adhesion in the choanal area,
(4)
abnormal direction of mesoderm migration (nasoseptal elements), and its excessive growth due to exogenous and local factors.

The ectopic mesenchymal tissue excess in the central part of the face forms a tangential atretic plate that extends from the vomer wall to the lateral wall of the nose. According to this theory, the excessive growth of nasoseptal elements leads to stenosis or bone atresia. Membranous atresia probably arises due to incomplete recanalization of the epithelial plug in the 13th to 20th week of gestation. Other theories of atresia include the Pasquini (2003) [7] and Lalani theory (2004) [8]:

(5)
persistence of epithelial cells in the nasal cavity that proliferate between the sixth and eighth week of gestation,
(6)
excessive growth of lamina horizontalis and lamina perpendicularis ossis palatini.

The theory of persistence of the nasobuccal membrane (nasal sacs’ bottom) is the most often mentioned in the literature. Nevertheless, it seems unlikely, as the nasobuccal membrane forms near the outer nostrils, and after its perforation, primitive choanae start to form. However, the atresia of choanae probably occurs only in the later stages of development of a definitive secondary choanae. Due to the presence of associated anatomical abnormalities of the nasal cavity and choanal area, which usually result in a narrowing throughout half of the nasal cavity on the atresia side, the most probable cause is a generalized disorder of mesenchymal cell migration that also affects the development of the base of the skull [9].
Present diagnostic methods (endoscopy and CT imaging) have remarkably pushed our knowledge about anatomical features in each patient further. It makes the diagnosis of choanal atresia clear (type, thickness of the atretic segment). Typical changes in the nasal cavity on the atretic side include the thickening of the posterior part of the vomer, the thickening of the medial plate of the processus pterygoideus and the medialization of the lateral nasal wall on the level of the choana [2]. The aim of our study was to find out if the CT imaging evaluation with respect to the parameters followed in patients with choanal atresia will help us determine the optimal surgical treatment.

We have evaluated the nasal cavity CT imaging of 24 pediatric patients diagnosed with ICD-10: Q30.0 choanal atresia examined at the Department of Pediatric Otorhinolaryngology of the Medical Faculty of the Comenius University and the National Institute of Children’s Diseases in Bratislava (Slovakia). We have recorded the sex of patients, the presence of syndromes, their age at the time of the nasal cavity CT examination, and the types of atresia (congenital–acquired, unilateral–bilateral). In the case of the unilateral atresia, we have examined which half of the nasal cavity was affected. We determined the character of the atretic plate (membranous, bone-membranous, and bone types) and their locations (unilateral, bilateral) [4]. Using the method of Slovis et al. (1985) [10], a CT section paralleling the posterior hard palate at the level of the pterygoid plates was obtained in all children (Figure 1). The sections were 0.5 to 1 mm thick. The TomoCon PACS system was used for CT scanning. The measurements were obtained by one examiner with Tomocon Viewer application measuring tools.
We measured the width of the vomer (V) at the posterior end, and the width of the air space of the choanae or membranous atresia based on the measurement of the dimension from the lateral wall of the nasal cavity to the edge of the vomer (LWNC-V) of its posterior end (Figure 2). The obtained results were compared with the standards of these parameters according to the Slovis et al. (1985) [10] (Table 2) and statistically processed using the IBM SPSS Statistics for Macintosh, Version 27.0. Armonk, NY: IBM Corp.
In patients with bone or bone-membranous atresia, the width of LWNC-V is non-measurable.

Contrary to the recommendation by Slovis et al. (1985) [10] to indicate a transpalatal approach for the bilateral bone atresia, and endoscopically address only unilateral choanal atresia, based on the current modern endoscopic options, we have evidently moved to a transnasal microendoscopic approach [12,20,21]. The consistent fenestration of the atretic choana is combined with the posterior nasal septotomy. The results of our study strongly contributed to the justification of this procedure; it allows the creation of a spacious neochoana for both halves of the nasal cavity without the need for long-term stenting. The transpalatal approach is indicated only for very special and complicated cases.

Conceptualization I.Š. and J.B.; methodology and investigation, I.Š. and J.B.; software and validation, J.B., I.Š. and I.V.; statistical and formal analysis I.V.; writing—original draft preparation I.Š.; writing—review and editing, J.B. and I.V. All authors have read and agreed to the published version of the manuscript.

The study was conducted according to the guidelines of the Declaration of Helsinki, and approved by the Ethics Committee of National Institute of Children’s Diseases in Bratislava, Slovakia—protocol code: EK271-21.

All the data are available in this article (Table 3). 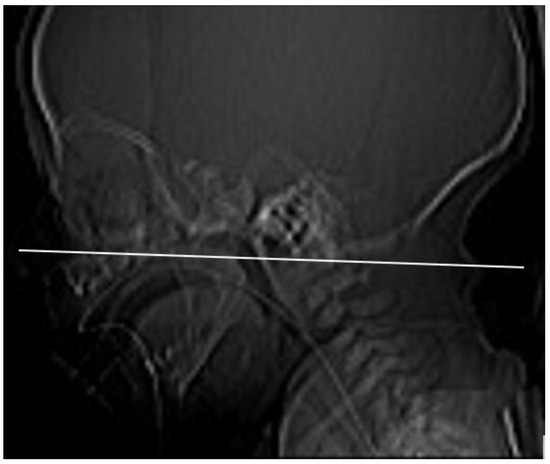 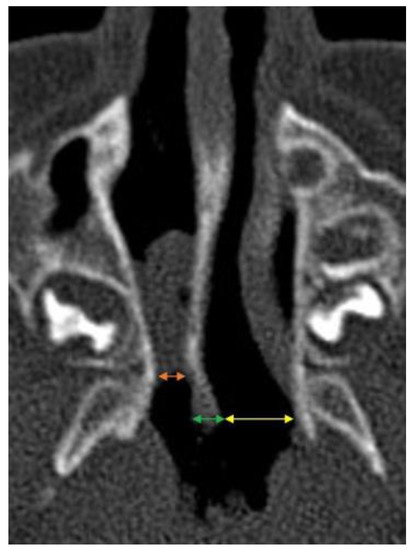 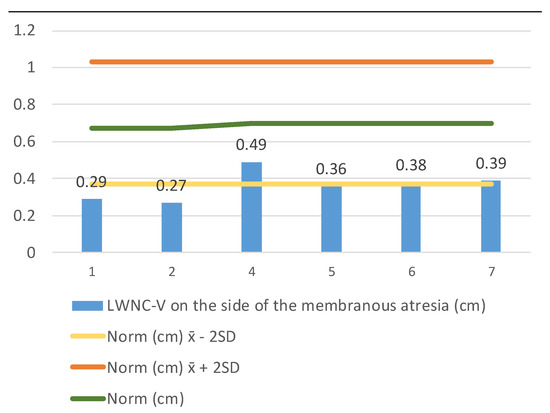 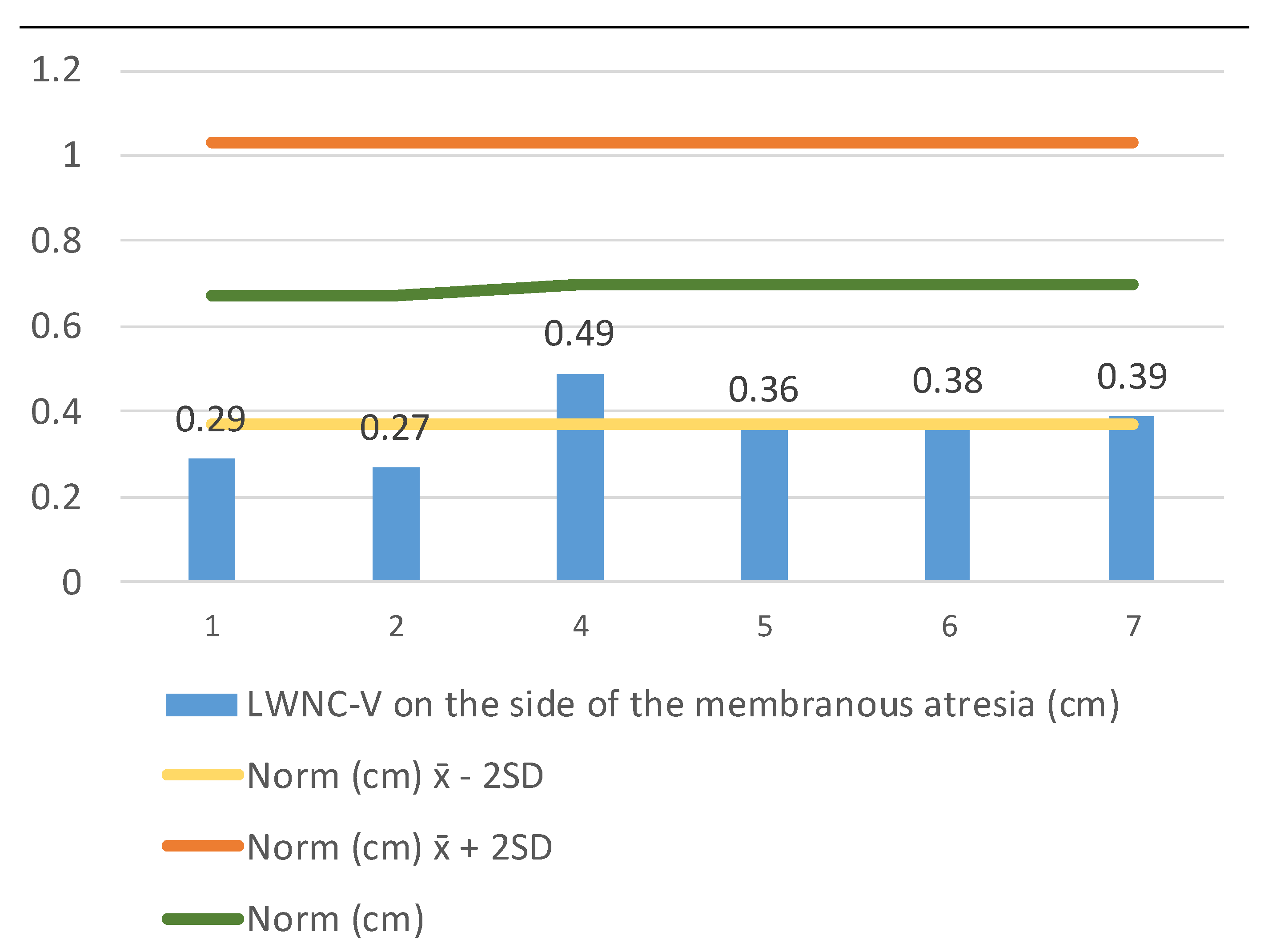