Epidemiology of Chronic Kidney Disease in Children: A Report from Lithuania

Background and Objectives: The data on the prevalence of chronic kidney disease (CKD) in the pediatric population are limited. The prevalence of CKD ranges from 56 to 74.7 cases per million of the age-related population (pmarp). The most common cause of CKD among children is congenital anomalies of the kidney and urinary tract (CAKUT). With progressing CKD, various complications occur, and end-stage renal disease (ESRD) can develop. The aim of the study was to determine the causes, stage, prevalence, and clinical signs of CKD and demand for RRT (renal replacement therapy) among Lithuanian children in 2017 and to compare the epidemiological data of CKD with the data of 1997 and 2006. Materials and Methods: The data of 172 Lithuanian children who had a diagnosis of CKD (stage 2–5) in 1997 (n = 41), in 2006 (n = 65), and in 2017 (n = 66) were retrospectively analyzed. Physical development and clinical signs of children who had CKD (stage 2–5) in 2017 were assessed. Results: The prevalence of CKD stages 2–5 was 48.0 pmarp in 1997; 88.7 in 2006; and 132.1 in 2017 (p < 0.01). Congenital and hereditary diseases of the kidney in 1997 accounted for 66% of all CKD causes; in 2006, for 70%; and in 2017, for 79%. In 2017, children with CKD stages 4 or 5 (except transplanted children) had hypertension (87.5%) and anemia (50%) (p < 0.01). Children under ≤2 years with CKD were at a 3-fold greater risk of having elevated blood pressure (OR = 3.375, 95% CI: 1.186–9.904). Conclusions: There was no change in the number of children with CKD in Lithuania; however, the prevalence of CKD increased due to reduced pediatric population. CAKUT remains the main cause of CKD at all time periods. Among children with CKD stages 4 or 5, there were more children with hypertension and anemia. In children who were diagnosed with CKD at an early age hypertension developed at a younger age. View Full-Text
Keywords: children; chronic kidney disease; epidemiology; renal replacement therapy; treatment children; chronic kidney disease; epidemiology; renal replacement therapy; treatment
►▼ Show Figures 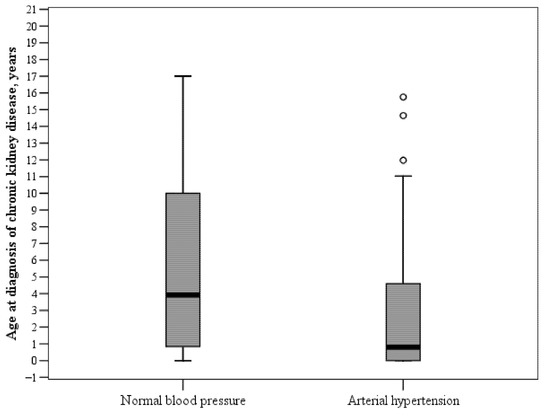