Risk of Breast Cancer in Women with Mastitis: A Retrospective Population-Based Cohort Study

:
Background and objectives: Breast cancer is a common cancer in women and has been the fourth leading cause of death in Taiwanese women. Risk factors for breast cancer include family history of breast cancer, genetic factors, and not breastfeeding. Several studies have reported an association between repeated inflammation at a young age, especially among lactating women, and cancer; however, the number of studies about the association of mastitis and breast cancer in nonlactating women is still limited. Therefore, the aim of this study was to determine the relationship between mastitis in women aged ≥40 years and breast cancer. Materials and Methods: This was a retrospective cohort study design. The data source was the Longitudinal Health Insurance Database 2010 (LHID 2010), comprising data collected by Taiwan’s National Health Insurance program. Cases of newly diagnosed mastitis in women aged ≥40 years (ICD-9-CM code = 611.0) were selected from the years 2010 to 2012. Women not diagnosed with mastitis were selected as the control group, and their data for the years 2009 to 2013 were obtained through the database. In addition, the non-mastitis group was matched 1:10 by age. Results: A total of 8634 participants were selected from the LHID 2010, which included 734 cases with mastitis and 7900 cases without mastitis. After adjustment for age, hypertension, hyperlipidemia, diabetes, hypothyroidism, and autoimmune diseases, the Cox proportional hazard model showed that patients with mastitis had a higher risk of breast cancer (aHR = 3.71, 95% CI = 1.9–7.02) compared with the non-mastitis group. The Kaplan–Meier curve also showed that women with mastitis had a higher risk of developing breast cancer. Conclusions: This study confirmed that women with mastitis have a higher risk of developing breast cancer. Therefore, women aged ≥40 years could reduce breast cancer risk by taking precautions to prevent mammary gland infection and mastitis.
Keywords:
breast cancer; risk factors; mastitis

Breast cancer is one of the most common types of cancer in women [1]. If surgery is performed during the first stage of breast cancer, the five-year survival rate can be as high as 89.5%. Despite this, breast cancer remains the fourth leading cause of death in Taiwanese women [2,3]. For early prevention of breast cancer in women, it is critical to identify the cancer-related risk factors to encourage high-risk groups to take appropriate precautions.
Mastitis is the inflammation of the mammary gland, and it can have multiple etiologies. For example, bacterial infection is associated with mastitis, with breastfeeding being a possible portal of entry for pathogens in lactational mastitis. According to estimates by the World Health Organization, 10–30% of lactational mastitis occurs in postpartum women [4]. The predominant species of bacteria involved in mastitis includes Staphylococcus aureus, S. epidermidis and Corynebacterium spp. [5]. In addition, granulomatous mastitis might be associated with different Corynebacterium species [6].
Many studies have indicated that inflammation increases the risk of developing different types of cancers. According to one population-based study, patients with inflammatory bowel diseases have increased risk of small bowel cancer. Due to the complexity of immunological stimulation, chronic inflammation is an important process in the oncogenesis of breast cancer [7]. Some studies have shown that the use of aspirin and other nonsteroidal anti-inflammatory drugs (NSAIDs) lower the risk of colorectal cancer, breast cancer, and skin cancer [8,9,10,11]. Although the regular use of aspirin and other NSAIDs is reported to reduce the risk of breast cancer, one study found that low-dose aspirin was not associated with improved breast cancer prognosis [12].
Lambe et al. showed that women who had a record of mastitis would be mildly more at risk of breast cancer [13]. Moreover, Chang et al. reached a similar conclusion in their study with a population of adult women [14]. Furthermore, after conducting a systemic review, Nolan et al. recently presented the hypothesis that mastitis might be a risk factor for breast cancer [15]. Therefore, the aim of this study was to investigate whether patients aged ≥40 with a history of mastitis have an increased risk of developing breast cancer. We hypothesize that elderly women with mastitis have significant differences in breast cancer risk.

The National Health Insurance Research Database (NHIRD) is maintained by the Taiwan National Health Research Institutes. It contains data on more than 99% of the 23 million residents of Taiwan enrolled in National Health Insurance. The Longitudinal Health Insurance Database (LHID) contains one million beneficiaries randomly sampled from the database. There are no differences in the LHID sample with respect to the distribution of age or gender in the entire population. The database contains all outpatient and inpatient medical claims, including drug medications, medical operations, procedures, and fees. This study was approved by the Ethical Review Board of Chung Shan Medical University Hospital (CS 18096).

This was a retrospective cohort study. We recruited female patients from the LHID. The study population was newly diagnosed with nonlactating mastitis (ICD-9-CM code = 611.0) from 2010 to 2012 and aged ≥40 years. The National Health Insurance had a review mechanism to confirm the reliability of disease diagnosis. The index date was the first diagnosis date of mastitis. We excluded diagnoses of breast cancer (ICD-9-CM code = 174) before the index in order to confirm new-onset disease. The non-mastitis patients were defined as not having had a diagnosis of mastitis (ICD-9-CM codes = 611.0, 675) from 2009 to 2013. A 1:10 matching by age was used to provide an index date for the non-mastitis patients that had the same starting point. Furthermore, we excluded women who were pregnant 1 year before the index date up to the end date. The outcome variable was defined as a diagnosis of breast cancer (ICD-9-CM code = 174). Both groups were followed up until the onset of breast cancer, until 31 December 2013, or until withdrawal from the social insurance program, whichever occurred first. In addition, to avoid breast cancer that occurred in a short period of time due to unmeasured factors, the follow-up duration was defined as being a minimum of 6 months.

To compare the characteristics of mastitis and non-mastitis patients, the Student’s t-test and chi-squared test were calculated, as appropriate. Kaplan–Meier analysis was used to calculate the cumulative incidence of breast cancer among the two groups. The log-rank test was used to test the significance. To determine the independent risk of mastitis, the multivariate Cox proportional hazard model was used to estimate the hazard ratios. The statistical software version used was SPSS 18.0 (SPSS Inc., Chicago, IL, USA). 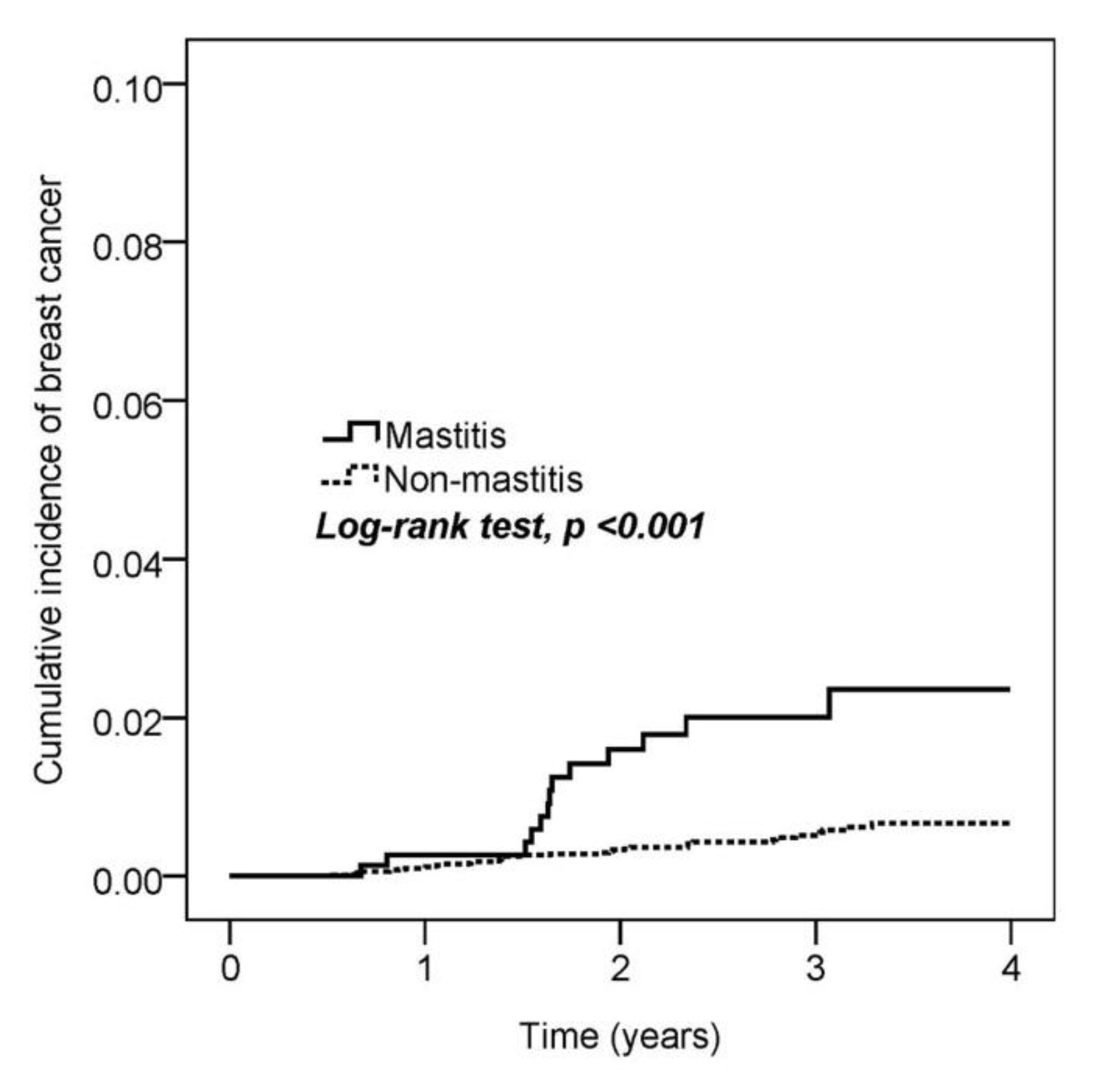