Background and Objectives: Dropped head syndrome (DHS) is characterized by apparent neck extensor muscle weakness and difficulty in extending the neck to raise the head against gravity. DHS affects forward vision and eating behavior, and hence impairs quality of life. However, standardized treatment of DHS has not yet been established. The purpose of this preliminary study is to seek for a possibility of effective non-surgical, conservative treatment for DHS, by applying a robotic treatment. Materials and Methods: A wearable exoskeleton type robot suit hybrid assistive limb (HAL) was applied to three patients with DHS. A course of HAL treatment included 10 sessions of gait training using HAL. One session lasted about an hour. Case 1 completed the course twice, the first time in two weeks (one session per day) and second time in 10 months (one session per month). Case 2 and Case 3 completed the course once in 10 weeks (one session per week) and in 6 months (one session per 2.5 weeks), respectively. Immediate and lasting effects of HAL on the reduction of cervical sagittal vertical alignment (SVA) during gait was evaluated using a motion capture system. Results: Case 1 showed improvement of cervical alignment during gait after the HAL courses of both different frequencies. Case 2 did not show improvement of cervical alignment during gait. Case 3 showed improvement of cervical kyphosis but not of cervical sagittal alignment during gait. Conclusions: The results of the preliminary study suggest that gait training using HAL may be an effective option of conservative treatment for a part of DHS patients. They also suggest that a lack of immediate effects on the cervical alignment and a lack of ability to perform compensatory trunk motion may indicate a non-responding patient. Generalization of the results requires further research with more cases. View Full-Text
Keywords: dropped head syndrome 1; hybrid assistive limb (HAL) 2; wearable robot 3; cervical alignment 4; cervical kyphosis 5; walking 6 dropped head syndrome 1; hybrid assistive limb (HAL) 2; wearable robot 3; cervical alignment 4; cervical kyphosis 5; walking 6
►▼ Show Figures 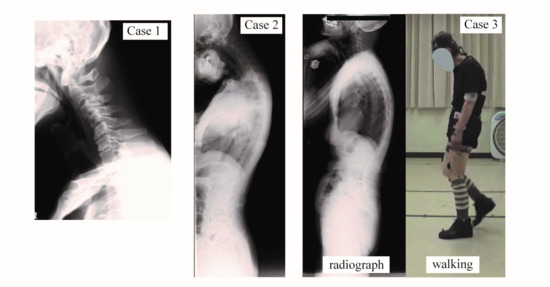