Antiproliferative Properties of Type I and Type II Interferon

The clinical possibilities of interferon (IFN) became apparent with early studies demonstrating that it was capable of inhibiting tumor cells in culture and in vivo using animal models. IFN gained the distinction of being the first recombinant cytokine to be licensed in the USA for the treatment of a malignancy in 1986, with the approval of IFN-α2a (Hoffman-La Roche) and IFN-α2b (Schering-Plough) for the treatment of Hairy Cell Leukemia. In addition to this application, other approved antitumor applications for IFN-α2a are AIDS-related Kaposi’s Sarcoma and Chronic Myelogenous Leukemia (CML) and other approved antitumor applications for IFN-α2b are Malignant Melanoma, Follicular Lymphoma, and AIDS-related Kapoisi’s Sarcoma. In the ensuing years, a considerable number of studies have been conducted to establish the mechanisms of the induction and action of IFN’s anti-tumor activity. These include identifying the role of Interferon Regulatory Factor 9 (IRF9) as a key factor in eliciting the antiproliferative effects of IFN-α as well as identifying genes induced by IFN that are involved in recognition of tumor cells. Recent studies also show that IFN-activated human monocytes can be used to achieve >95% eradication of select tumor cells. The signaling pathways by which IFN induces apoptosis can vary. IFN treatment induces the tumor suppressor gene p53, which plays a role in apoptosis for some tumors, but it is not essential for the apoptotic response. IFN-α also activates phosphatidylinositol 3-kinase (PI3K), which is associated with cell survival. Downstream of PI3K is the mammalian target of rapamycin (mTOR) which, in conjunction with PI3K, may act in signaling induced by growth factors after IFN treatment. This paper will explore the mechanisms by which IFN acts to elicit its antiproliferative effects and more closely examine the clinical applications for the anti-tumor potential of IFN. View Full-Text
Keywords: interferon; apoptosis; antitumor; monocytes interferon; apoptosis; antitumor; monocytes
►▼ Show Figures 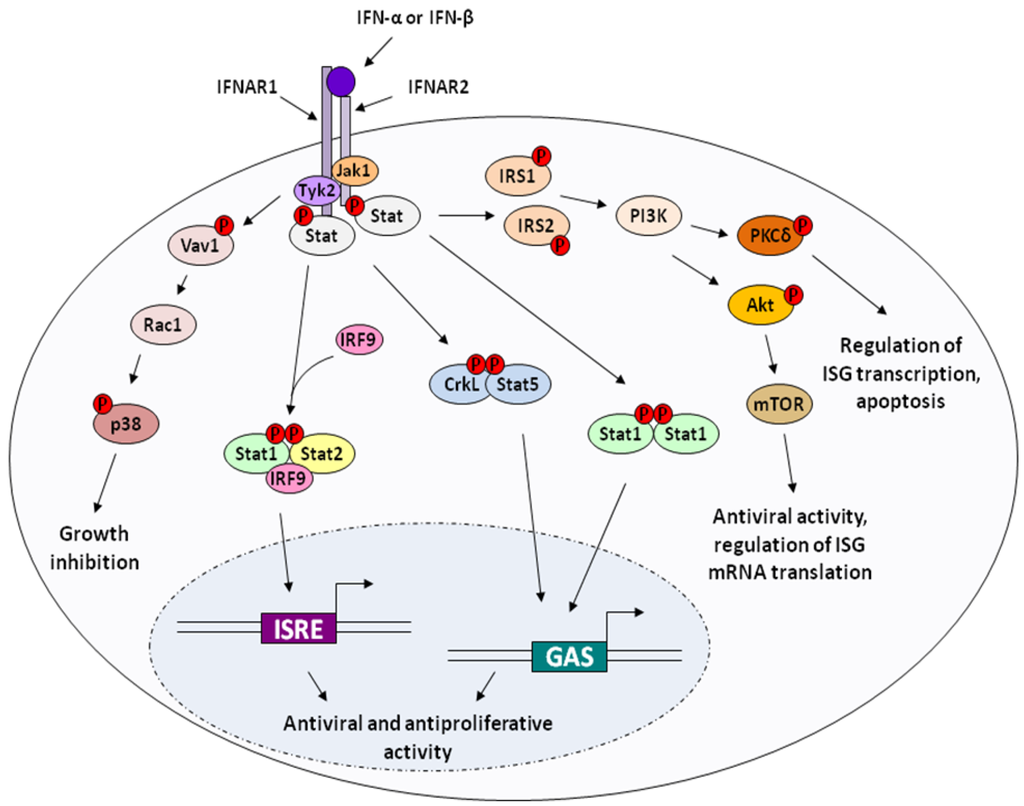