Real-Time Non-Invasive and Direct Determination of Lactate Dehydrogenase Activity in Cerebral Organoids—A New Method to Characterize the Metabolism of Brain Organoids?
Next Article in Special Issue

The Endocannabinoid System and Cannabidiol: Past, Present, and Prospective for Cardiovascular Diseases
Previous Article in Journal

:
Cannabidiol (CBD) is a major nonpsychotropic component of Cannabis sativa with various pharmacological activities. In this study, we investigated the skin moisturizing effect of CBD and its mechanism. A 1% CBD solution was applied daily to skin of HR-1 hairless (Seven-week-old, male) for 14 days. The dermal water content in CBD-treated mice was significantly increased compared to that in the control group. Furthermore, no inflammatory reaction in the skin and no obvious skin disorders were observed. The mRNA expression levels of loricrin, filaggrin, collagen, hyaluronic acid degrading enzyme, hyaluronic acid synthase, ceramide degrading enzyme, and ceramide synthase in the skin were not affected by the application of CBD. However, only aquaporin-3 (AQP3), a member of the aquaporin family, showed significantly higher levels in the CBD-treated group than in the control group at both the mRNA and protein levels. It was revealed that CBD has a moisturizing effect on the skin. In addition, it is possible that increased expression of AQP3, which plays an important role in skin water retention, is a contributor to the mechanism. CBD is expected to be developed in the future as a cosmetic material with a unique mechanism.
Keywords:
cannabidiol; aquaporin-3; skin; Cannabis sativa; cosmetics; moisturizing effect

The skin is an organ that exists at the boundary between the external environment and the internal environment of a living body. Dermal water content is related to the elasticity of the skin and the formation of wrinkles. In fact, in elderly individuals, dermal water content is reduced, elasticity is reduced, and wrinkles form [1]. Dermal water content is controlled by various moisturizing factors, such as collagen [2], ceramide [3,4], and hyaluronic acid [5,6]. Moreover, loricrin [7] and filaggrin [8] are involved in the barrier function of the skin and are also important for skin moisturization. In addition to these factors, it has become clear that the water channels known as aquaporins (AQPs) play important roles in skin water retention. In particular, AQP3 is predominantly expressed in the cell membrane of skin keratinocytes, and it has been reported that AQP3-knockout mice have dry skin and reduced skin elasticity compared to wild-type mice [9,10]. Moreover, cutaneous AQP3 are implicated in the development of several skin diseases, such as eczema, diabetic xeroderma, psoriasis, hyperproliferative skin disorders, or melanoma, among others, and are very important molecule that controls skin function [11]. Currently, various substances and natural products that increase these moisturizing factors and AQPs have been found and are expected to be used as cosmetic materials.
Cannabidiol (CBD) is a major nonpsychotropic component of Cannabis sativa. CBD is known to exert various pharmacological actions, such as anxiolytic [12], antipsychotic [13], anti-inflammatory [14], antiemetic [15], and antidiabetic actions [16], and active research is being conducted. CBD has also been found to have effects on atopic dermatitis, pruritus, and acne [17,18], and research on the effects of CBD on the skin is being conducted. Moreover, it has been reported that when CBD is applied to skin, dermal water content and the elasticity of the skin are increased [19], and there is a protective effect against ultraviolet rays [20]. As mentioned previously, CBD is attracting attention as a cosmetic material. However, scientific evidence is still scarce, and it remains unclear how CBD affects the genes that regulate skin function.
Therefore, in this study, we aimed to generate scientific evidence on the usefulness of CBD by investigating the skin moisturizing effect of CBD. Specifically, CBD was applied to the skin of hairless mice, and dermal water content was measured. We also investigated the effect of CBD on the expression of genes (loricrin, filaggrin, collagen, hyaluronic acid degrading enzyme, hyaluronic acid synthase, ceramide degrading enzyme, ceramide synthase, and AQPs) involved in the maintenance of dermal water content.

Skin tissue was analyzed after the application of CBD for 14 days by hematoxylin and eosin (HE) staining. The results showed that, even when CBD was applied, the skin tissue was similar to that in the control group, and no obvious skin tissue disorders were observed (Figure 1A). In addition, the mRNA expression levels of Tnfa and Cox2, which are increased during inflammation, were not altered by the application of CBD (Figure 1B,C).
Based on the above results, no significant skin toxicity was observed at the CBD treatment concentration in this experiment.

Dermal water content and TEWL after CBD was applied for 14 days were measured. The dermal water content in the CBD-treated group was significantly increased compared to that in the control group (Figure 2A). In contrast, TEWL in the CBD-treated group was similar to that in the control group (Figure 2B).
In general, when the barrier function of the skin is decreased, TEWL increases. Therefore, these results showed that when CBD was applied to mouse skin for 14 days, dermal water content increased while normal barrier function was maintained.

Dermal water content is regulated by loricrin, filaggrin, collagen, hyaluronic acid, ceramide and other factors. Therefore, whether the expression levels of genes involved in this process were changed by CBD application was investigated.
The mRNA expression levels of Lor and Flg in the skin after the application of a 1% CBD solution for 14 days were almost the same as those in the control group. The expression level of collagen (Col1a1 and Col1a2) was not different between the CBD-treated group and the control group. Furthermore, hyaluronan degrading enzyme (Hyal1), hyaluronan synthase (Has2), ceramide degrading enzymes (Acer1 and Asah1), and ceramide synthases (Sptlc1 and Sptlc2) were not affected by the application of CBD (Figure 3).

2.4. AQP mRNA and Protein Expression Levels in the Skin

CBD crystalline powder (Batch No. CB99020171A) was provided by PharmaHemp Laboratories (Ljubljana, Slovenia) and used in this study. This powder contained 99.34% CBD.

Seven-week-old male HR-1 hairless mice were purchased from Hoshino Laboratory Animals, Corp. (Ibaraki, Japan). The mice were divided into two groups (n = 6): a control group and a CBD-treated group. In the control group, an aqueous solution containing 10% propylene glycol and dimethyl sulfoxide was applied to the skin on the backs of the mice for 14 days. In the CBD-treated group, an aqueous solution containing 1% CBD was applied to the skin of the mice for 14 days. After the application was completed, dermal water content (Corneometer CM825; Courage & Khazaka, Cologne, Germany) and TEWL (Tewameter TM300; Courage & Khazaka, Cologne, Germany) were measured. The back skin was removed under isoflurane anesthesia, and skin tissue damage was observed by HE staining. To analyze mRNA and protein expression, the back skin was instantly frozen in liquid nitrogen and stored at −80 °C.

The skin was soaked in 4% formaldehyde solution to fix the tissue. Tissue samples were embedded in paraffin and mounted on glass slides. The slides were deparaffinized, stained with HE, and observed under a microscope. The slides were blindly evaluated by a pathologist and evaluated for skin damage.

Approximately 150 mg of skin was homogenized in dissecting buffer. According to past reports [44], centrifugation was performed to prepare a sample solution that was used for Western blotting. The sample solution was diluted with loading buffer after the protein concentration was measured by the BCA method. The proteins were separated by electrophoresis and then transferred to a polyvinylidene difluoride membrane. The membrane was blocked with blocking buffer and then incubated with primary antibodies [rabbit anti-rat AQP3 (Alomone Labs, Jerusalem, Israel), mouse anti-rabbit Na/K-ATPase (Merck Millipore, Darmstadt, Germany)] and secondary antibodies [donkey anti-rabbit IgG-HRP (Santa Cruz Biotechnology Inc., Santa Cruz, CA, USA) and goat anti-mouse IgG-HRP antibody (Merck Millipore, Darmstadt, Germany). The membrane was reacted with enhanced chemiluminescent prime Western blotting detection reagents (GE Healthcare, Fairfield, CT, USA), and bands were detected by an immunoimage analyzer (ImageQuant LAS500, GE Healthcare). The protein expression level was normalized using Na/K-ATPase.

The values are shown as the mean ± standard deviation (SD). Normality was tested through Shapiro-Wilk test, and homogeneity of variances tested through F test. Based on the normality of distribution and variance homogeneity, Student’s t-test was used for analysis, and p < 0.05 was considered significant.

It was revealed that CBD has a moisturizing effect on the skin. In addition, it is possible that increased expression of AQP3, which plays an important role in skin water retention, is a contributor to the mechanism. CBD is expected to be developed in the future as a cosmetic material with a unique mechanism.

This research was funded by the following grants; Grant-in Aid for Scientific Research (C) from the Japan Society for the Promotion of Science, grant number 19K08783. This research was supported by the PIA Co., Ltd. and Elixinol Co., Ltd.

The study was conducted according to the guidelines of the Declaration of Helsinki, and approved by the Institutional Review Board of Hoshi University (approval number: 19-137, 12 November 2019). 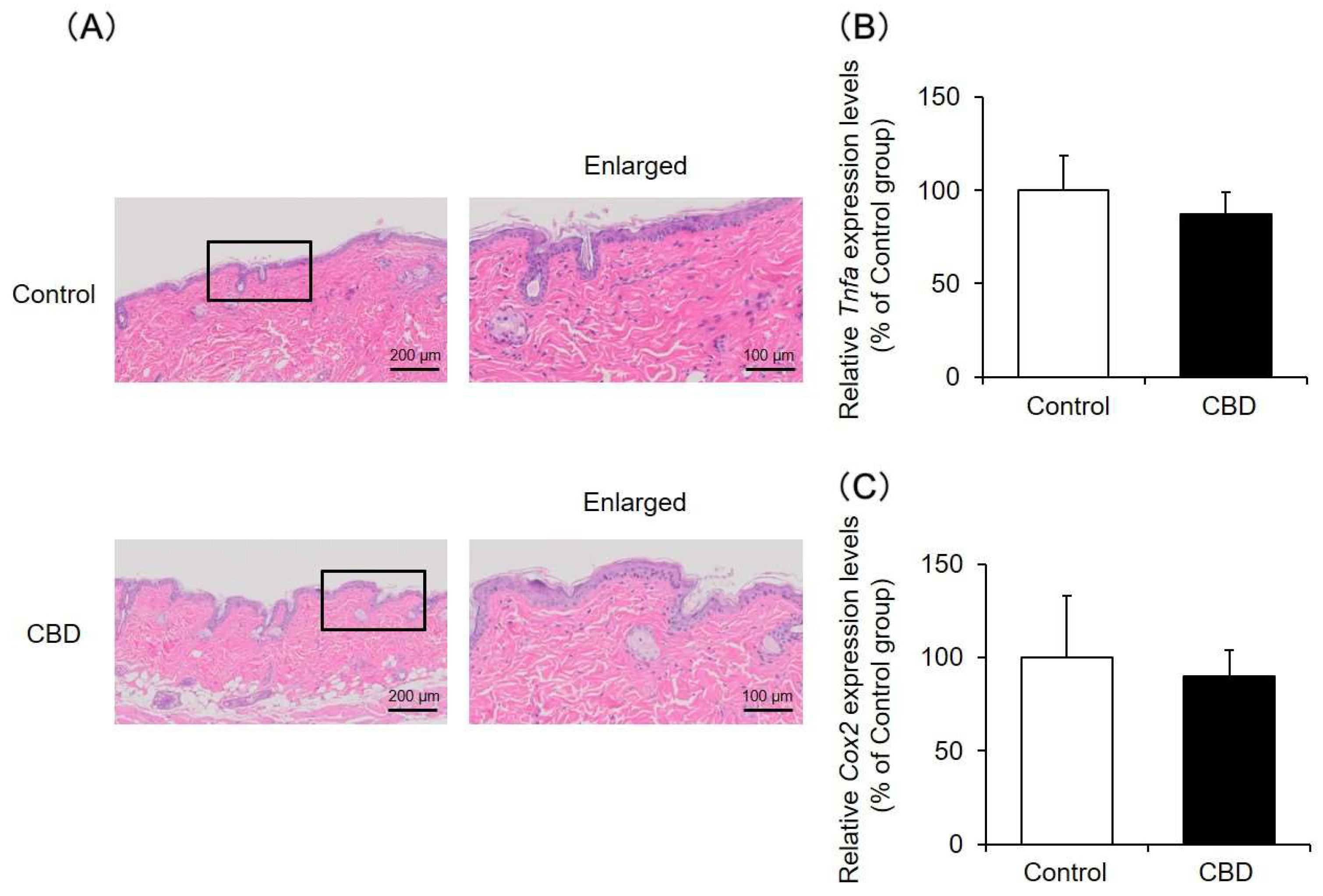 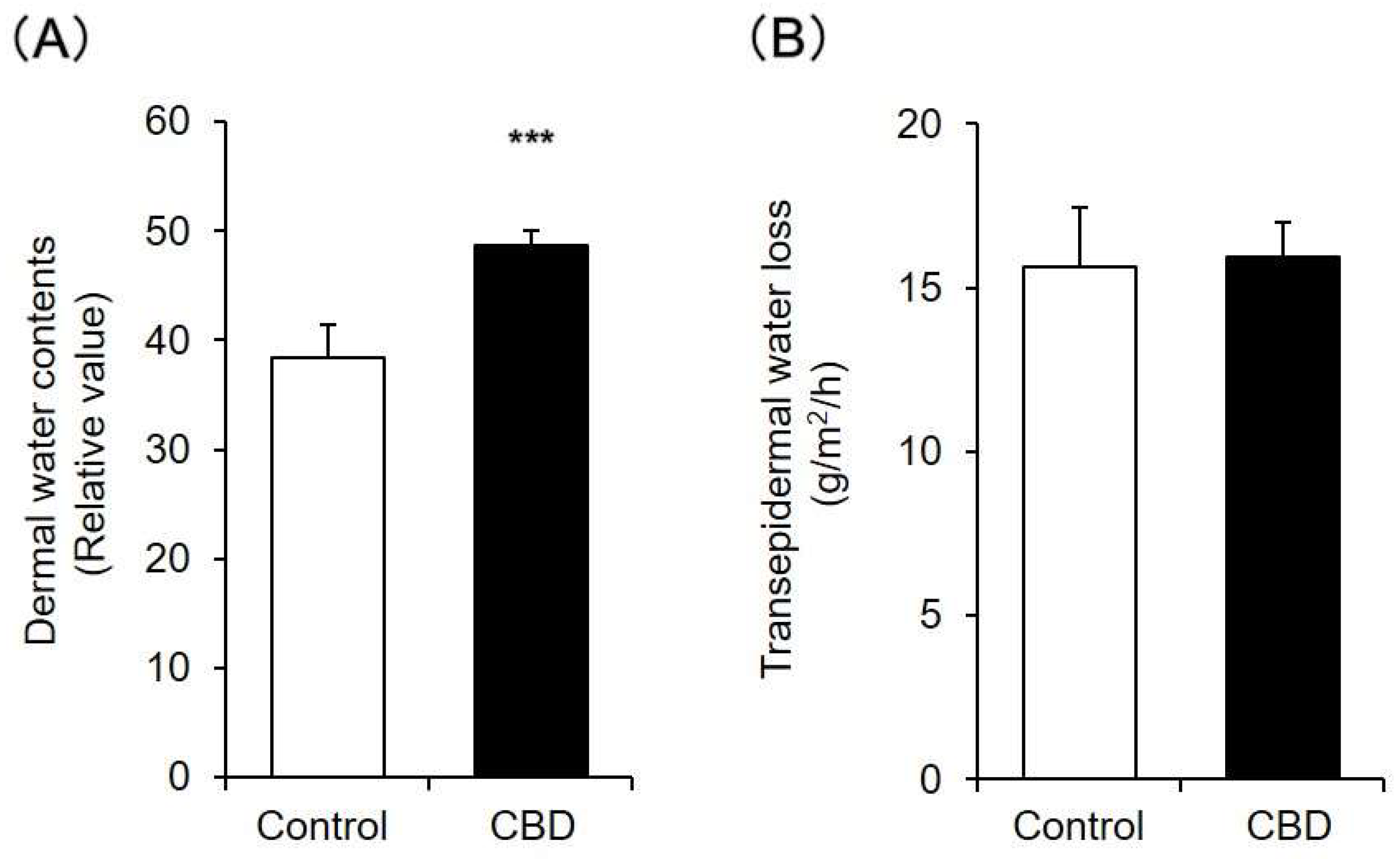