This work showcased the first physicochemical investigation of psoralen (PSO) binding to double stranded DNA (dsDNA) through electroanalytical methods. Results evidenced that PSO presents one non-reversible anodic peak at electric potential (Epa) ≈ 1.42 V, which is associated with its oxidation and the formation of an epoxide derivative. Moreover, PSO analytical signal (i.e., faradaic current) decreases linearly with the addition of dsDNA, while the electric potential associated to PSO oxidation shifts towards more positive values, indicating thence that dsDNA addition hinders PSO oxidation. These findings were corroborated by the chemoinformatic study, which evidenced that PSO intercalated noncovalently at first between base-pairs of the DNA duplex, and then irreversibly formed adducts with both DNA strands, leading up to the formation of a cross-link which bridges the DNA helix, which explains the linear dependence between the faradaic current generated by PSO oxidation and the concentration of DNA in the test-solution, as well as the dependence between Ep and the addition of dsDNA solution. Therefore, the findings herein reported evidence of the applicability of electroanalytical approaches, such as voltammetry in the study of DNA intercalating agents. View Full-Text
Keywords: voltammetry; intercalating agent; furanocoumarin; thermodynamic; kinetics voltammetry; intercalating agent; furanocoumarin; thermodynamic; kinetics
►▼ Show Figures 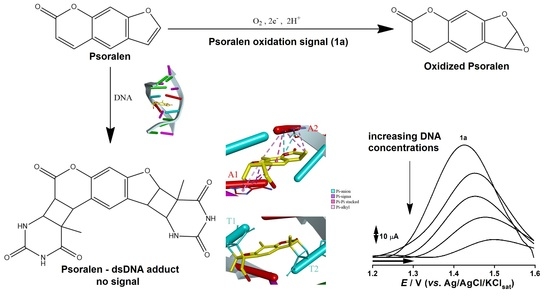