Regenerative Injections Including 5% Dextrose and Platelet-Rich Plasma for the Treatment of Carpal Tunnel Syndrome: A Systematic Review and Network Meta-Analysis

This network meta-analysis aimed to integrate the available direct and indirect evidence on regenerative injections—including 5% dextrose (D5W) and platelet-rich plasma (PRP)—for the treatment of carpal tunnel syndrome (CTS). Literature reports comparing D5W and PRP injections with non-surgical managements of CTS were systematically reviewed. The main outcome was the standardized mean difference (SMD) of the symptom severity and functional status scales of the Boston Carpal Tunnel Syndrome Questionnaire at three months after injections. Ranking probabilities of the SMD of each treatment were acquired by using simulation. Ten studies with 497 patients and comparing five treatments (D5W, PRP, splinting, corticosteroid, and normal saline) were included. The results of the simulation of rank probabilities showed that D5W injection was likely to be the best treatment, followed by PRP injection, in terms of clinical effectiveness in providing symptom relief. With respect to functional improvement, splinting ranked higher than PRP and D5W injections. Lastly, corticosteroid and saline injections were consistently ranked fourth and fifth in terms of therapeutic effects on symptom severity and functional status. D5W and PRP injections are more effective than splinting and corticosteroid or saline injection for relieving the symptoms of CTS. Compared with splinting, D5W and PRP injections do not provide better functional recovery. More studies investigating the long-term effectiveness of regenerative injections in CTS are needed in the future.
Keywords: median nerve; entrapment; regeneration; platelet-rich plasma; dextrose; steroid median nerve; entrapment; regeneration; platelet-rich plasma; dextrose; steroid

As the most common peripheral entrapment neuropathy, carpal tunnel syndrome (CTS) affects approximately 3.8% of the general population [1], with an incidence of around 300 cases per 100,000 person-years [2]. CTS leads to clinical symptoms including pain, numbness, tingling sensation, and weakness in the hand innervated by the median nerve. A recent observational study showed that painful symptoms were more likely to develop near the carpal tunnel, whereas non-painful sensory disturbances were identified to distribute more peripherally in patients with CTS [3]. The risk factors of CTS include, but are not limited to, female sex, obesity, diabetes, and hypothyroidism [4,5]. The diagnosis of CTS is traditionally based on electrophysiological tests; however, ultrasonographic nerve cross-sectional area measurements have also recently emerged as useful alternatives [6]. The therapeutic algorism for CTS can be based on symptom severity, findings of electrophysiological tests, and responsiveness to non-surgical therapy. Conservative treatments for mild to moderate CTS include corticosteroid injection [7], splinting [8], and physiotherapy (like therapeutic ultrasound, exercise, and neural mobilization) [9,10]. In patients with moderate to severe symptoms and poor responsiveness to non-operative management, carpal tunnel release (CTR) is indicated [11]. However, the symptoms might persist in 3% to 20% of patients after CTR [12]. In recalcitrant cases, the physicians should consider surgical management, such as revision neuroplasty, neurolysis, and nerve reconstruction [12].
Corticosteroids function as potent anti-inflammatory medications and have been widely used as the main injectate for treating CTS. A recent randomized controlled trial that recruited 234 patients with CTS demonstrated that a single corticosteroid injection was better than night splinting in terms of clinical effectiveness at six weeks post-injection [13]. The aforementioned result is consistent with that of a previous systematic review that revealed the short-term (at one month) benefits of corticosteroid injection in the treatment of CTS [14]. Injected corticosteroid is known to have an effective duration of 1–4 weeks in the target tissue [15]; however, its long-term advantage for CTS is also not supported by the available literature [14].
Regenerative medicine techniques, which involve regenerating human cells, tissues, or organs to restore normal function, have been increasingly used in the treatment of various musculoskeletal disorders [16]. In this regard, dextrose and platelet-rich plasma (PRP) are the two most commonly used regenerative injection regimens, and numerous in vitro and in vivo studies have shown their potential role in promoting tissue repair [17,18]. Furthermore, the pathophysiology of CTS comprises increased intra-compartment pressure and microcirculatory disturbance in subsynovial connective tissue [19]. An animal study revealed that chronic nerve compression could lead to a decrease in intermodal length and myelin thickness of Schwann cells [20]. As certain neurodegenerative pathologies, such as demyelination and axonal degeneration, have been observed in the median nerves of patients with CTS [21], perineural regenerative injection may have better and longer effectiveness than traditional non-surgical treatments. To this end, although several randomized controlled trials have shown the promising effects of 5% dextrose (D5W) and PRP injections on CTS [22,23], the reported clinical outcome is inconsistent across different studies. Therefore, the present systematic review and network meta-analysis aimed to synthesize and compare the available direct and indirect evidence on regenerative injections, including D5W and PRP, for treating CTS.

2.1. Study Selection and Characteristics of the Included Studies

A total of 182 records were found in the initial literature search. We retrieved 13 articles for a full-text review, after eliminating duplicates and irrelevant citations. Three studies were further discarded because one was a conference proceeding without retrievable data [24], one was a case report [25], and the other was a case series without a control group [26]. Therefore, ten studies were included in the final quantitative analysis (Figure 1) [22,23,27,28,29,30,31,32,33,34].
We summarized the characteristics of the included studies in Table 1 and Table 2. This meta-analysis included 497 patients with 518 affected wrists. The majority (> 75%) of the overall participants were women. The average age in the patient group across the included trials ranged from 36.6 to 60.4 years. The average symptom duration ranged from 13.7 to 72.0 months.
Of the ten included studies, three compared PRP with corticosteroid injection [27,30,32], one compared PRP with saline injection [28], three compared PRP injection (with or without additional splinting) with splinting alone [23,29,33], one [34] compared D5W with saline injection, one [22] compared D5W with corticosteroid injection, and one [31] compared PRP with D5W injection. With respect to outcome assessment, the Boston Carpal Tunnel Questionnaire (BCTS) was used in nine [22,23,27,29,30,31,32,33,34] of the ten enrolled studies. The visual analogue scale (VAS) for pain was used as a surrogate for the symptom severity scale (SSS) in one trial [28]. In terms of the injection technique, seven studies [22,23,28,30,31,33,34] used ultrasound guidance, whereas three [27,29,32] employed palpation guidance. The maximal follow-up duration was 24 weeks in five trials [22,31,32,33,34], 12 weeks in three trials [27,28,30], 10 weeks in one trial [29], and four weeks in one trial [23]. Only one study [29] reported some minor adverse effects after the injection.

2.2. Assessment of the Quality of the Included Studies

We summarized the quality assessment in Figure 1 and Figure 2. In most of the included studies, the item found to have a high risk of bias was blinding of participants and personnel. The aforementioned procedure was not applicable in studies in which splinting was used in the comparative arms. Likewise, for the PRP trials, the patients were aware of which treatment they received if no sham blood withdrawal was used in the control injection groups.
On the other hand, selective reporting was revealed to have a low risk of bias in the majority of the enrolled trials. Almost all of the studies reported the outcome by using acceptable clinical assessment tools, together with electrophysiological examinations.

2.4. Comparison of SMDs of FSS among Different Treatments

The funnel plots for SSS and FSS (Figure 5) revealed a symmetric distribution of the inter-group comparisons of the SMDs. The Egger’s test did not reveal a significantly small study bias (p = 0.386 for SSS and 0.692 for FSS, respectively).

This review was conducted in accordance with the PRISMA (Preferred Reporting Items for Systematic Reviews and Meta-Analyses) guidelines [49]. PubMed and Embase were used as the two main electronic databases for the literature search, which covered records from the earliest time to July 2019, without language limitation. The references of relevant articles and the registry of the clinical trials, such as ClinicalTrials.gov, were also manually searched for eligible studies. The following keywords were used in different combinations: “carpal tunnel syndrome”, “platelet-rich plasma”, and “dextrose”. Two authors independently read the titles and abstracts of the retrieved literature and reviewed the full text of articles, potentially fulfilling our inclusion criteria. The search strategy is provided in Appendix A.

The inclusion criterion was being a clinical study comparing regenerative injections (D5W and PRP) with non-surgical treatments for CTS. The exclusion criteria were (1) being case reports/series, reviews, and non-human trials; (2) lacking quantitative outcome assessment; (3) lacking a control group; and (4) being studies on other peripheral nerve entrapment syndromes (other than CTS).

Two authors independently evaluated the quality of the included trials by using the Cochrane risk-of-bias tool for randomized controlled trials [50]. Six aspects were evaluated, including (1) random sequence generation, (2) allocation concealment, (3) blinding of participants and personnel, (4) incomplete outcome data, (5) selective reporting, and (6) other biases. Each item is appraised as having a low, high, or unclear risk of bias. Any discrepancy of opinions between the two authors was resolved by discussion or through the decision of the corresponding author.

The following data were retrieved from the included studies: first author, publication year, study design, sample size, disease severity, follow-up timing and duration, regenerative injection regimen, guiding technique, and details of the comparative treatments. The main outcome was the SMD of the scores in the BCTS before and after treatments [51]. The SSS and FSS were analyzed separately. If the study only used the VAS for pain for symptom assessment, we considered the VAS as a surrogate for the SSS. Because the follow-up timing and duration were different among the studies, we chose the assessments at baseline and at or close to the 3rd month post-injection, for analysis.
In the pairwise analysis, the random-effect model was chosen because the regenerative injection regimens and their counterpart treatments varied across the trials. The heterogeneity across the studies was expressed by using the I2 statistics and analyzed by using the Cochrane Q test [52]. A value of I2 > 50% was considered statistically significant heterogeneity [52]. For the network meta-analysis, a generalized linear mixed model was used to combine the direct and indirect comparisons. The loop inconsistency model was used to examine whether inconsistency existed between direct and indirect evidence [53]. Ranking probabilities of the SMD of each treatment were acquired by using simulation and presented by using ranking probability curves [53]. The funnel plot method and Egger’s test were used to investigate the potential existence of publication bias [53], indicating that studies with larger sample sizes and significant results are more likely to be published than those with small participant numbers and insignificant outcomes. The statistical software package Stata (StataCorp. 2015. Stata Statistical Software: Release 14. StataCorp LP, College Station, TX, USA) was employed for all analyses, and p < 0.05 was considered statistically significant.

We would like to show our appreciation for Yung-Tsan Wu for proving their newly accepted manuscript regarding comparative effectiveness of PRP vs. D5W injections for CTS patients.

All authors declared no conflict of interest.

The manuscript does not contain clinical studies or patient data. 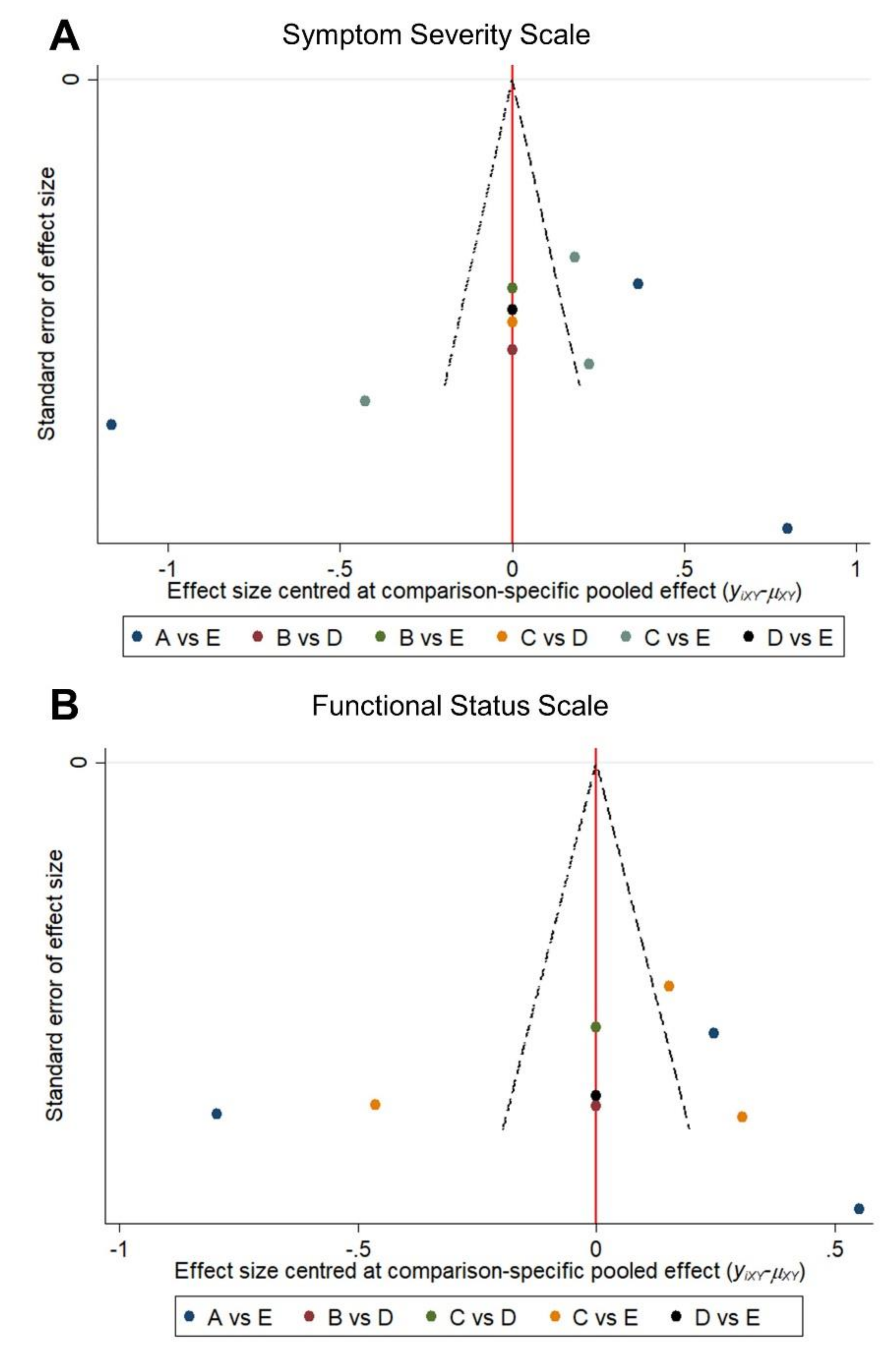