Effects of an Adaptogenic Extract on Electrical Activity of the Brain in Elderly Subjects with Mild Cognitive Impairment: A Randomized, Double-Blind, Placebo-Controlled, Two-Armed Cross-Over Study
Previous Article in Journal

Preparation, Characterization, and Evaluation of Cisplatin-Loaded Polybutylcyanoacrylate Nanoparticles with Improved In Vitro and In Vivo Anticancer Activities

This study aimed to evaluate the therapeutic efficacy of the cisplatin encapsulated into polybutylcyanoacrylate (PBCA) nanoparticles for the treatment of kidney cancer. The nanoformulation was successfully developed using the miniemulsion polymerization method and characterized in terms of size, size distribution, drug loading and encapsulation efficiencies, drug release behavior, in vitro cytotoxicity effects, in vivo toxicity, and therapeutic effects. Cisplatin-loaded PBCA nanoparticles were confirmed to be in nanoscale with the drug entrapment efficiency of 23% and controlled drug release profile, in which only 9% of the loaded drug was released after 48 h. The nanoparticles caused an increase in the cytotoxicity effects of cisplatin against renal cell adenocarcinoma cells (ACHN) (2.3-fold) and considerably decreased blood urea nitrogen and creatinine concentrations when compared to the standard cisplatin (1.6-fold and 1.5-fold, respectively). The nanoformulation also caused an increase in the therapeutic effects of cisplatin by 1.8-fold, in which a reduction in the mean tumor size was seen (3.5 mm vs. 6.5 mm) when compared to the standard cisplatin receiver rats. Overall, cisplatin-loaded PBCA nanoparticles can be considered as a promising drug candidate for the treatment of kidney cancer due to its potency to reduce the side effects of cisplatin and its toxicity and therapeutic effects on cancer-bearing Wistar rats.
Keywords: cisplatin; cytotoxicity; drug delivery; kidney cancer; PBCA nanoparticles cisplatin; cytotoxicity; drug delivery; kidney cancer; PBCA nanoparticles

Renal cell carcinoma (RCC; also known as renal adenocarcinoma), with increasing incidence, causes 90% of renal malignancies [1] and is responsible to 2.2% of all malignancies [2]. RCC is a highly metastasis malignancy [3] that 25–30% of RCC patients are diagnosed with metastasis [1]. Furthermore, it is one of the most lethal cancers with a five-year survival rate of 15–25% [4]. One study showed that nearly 270,000 new cases are diagnosed with RCC, which causes approximately 116,000 deaths worldwide [5]. Currently, chemotherapy is considered as a main approach for the treatment of kidney cancer [6], and cisplatin is one the chemotherapeutic agent used for the treatment of RCC [3].
Cisplatin plays a vital role in cancer treatment and has been widely used to treat various types of cancers, including ovarian, cervical, head and neck, and non-small-cell lung cancer for years [7]. It forms a cisplatin-DNA adduct, which causes cell death through the cell apoptotic process [8]. However, cisplatin has several severe side effects, including gastrotoxicity, ototoxicity, allergic reactions, and myelosuppression that limit its clinical use [9]. Today, nanoparticles are considered as a promising approach for improving the pharmacokinetics of various types of drugs [10,11].
Nanoparticles have been widely investigated as drug delivery systems to increase the therapeutic efficacy of drugs [12,13,14,15,16] and reduce their side effects [17,18]. Nanoparticles have a high surface area to volume ratio; therefore, they could encapsulate drugs in high concentrations and increase drug delivery to cancerous cells [19]. They are also considered as excellent drug delivery systems, due to isolating the chemotherapeutic compounds from the systemic environment and targeted accumulation of the compounds in solid tumors with leaky vasculature and impaired lymphatics, resulting in improved cellular uptake [20]. In addition, nanoparticles are able to increase the water solubility of small insoluble molecules, leading to improving their solubility and bioavailability [21]. Polybutylcyanoacrylate (PBCA) nanoparticles are polymeric carriers and have been broadly used for drug delivery purposes. They are biodegradable particles and potent to alter the biological distribution of therapeutic agents in the human body. Apart from this, PBCA nanoparticles take advantage of easy preparation and purification processes and being able to overcome multidrug resistance [22,23]. These features make these particles as a suitable candidate for drug delivery. The present study aimed to use this carrier for cisplatin delivery to RCC. For this purpose, the potency of PBCA as the cisplatin carrier was evaluated in vitro and in vivo environments for the treatment of kidney cancer. In this regard, the in vitro release behavior, cytotoxicity, in vivo toxicity, and therapeutic effects of the formulation were studied using the dialysis membrane method, 3-[4,5-dimethylthiazole-2-yl]-2,5-diphenyltetrazolium bromide (MTT) assay, and histopathological studies. Further analyses, including blood urea nitrogen (BUN) and creatinine concentrations, and their tumor size were also investigated to evaluate the toxicity of the nanoformulation.

A versatile drug delivery carrier should demonstrate carrier and encapsulation stability, which restrain premature drug release prior to approaching the target site [57], and for this reason, stability is considered as a key factor for the development of formulations. PBCA nanoparticles have been known as stable carriers due to the rigidity of their matrix/shell [58]. In the present study, the results showed that the cytotoxicity effect of cisplatin-loaded PBCA nanoparticles, two months after the synthesis, was approximately similar to the results obtained in the first day of the synthesis (Figure 9), indicating the sufficient stability of the nanoformulation and, consequently, its ability to maintain the anticancer effects of cisplatin.

2.5. In Vivo Toxicity and Therapeutic Effects

PBCA nanoparticles were prepared using miniemulsion polymerization technique [26]. For this purpose, 250 μL of BCA monomer was added dropwise into a mixture of HCl (125 μL, 0.01 N), olive oil (62.5 μL, peroxide value 3.7 mEq O2 kg−1 of oil, acidity value 2.8% oleic acid, and iodine value 86.4 cg I2 g−1; Faraz Rahbar Saba Co. Tehran, Iran), honey (125 mg, pH: 4.1, moisture content of 25%; Honey Company Naseri, Shiraz, Iran), and PEG400 (125 μL). Next, 187 mg of dextran and 75 mg of cisplatin were added to the resultant and mixed. Then, 25 mL of deionized water was added to the reaction medium, and the mixture was stirred (300 RPM, 10 min, room temperature) to obtain the pre-emulsion suspension. The pre-emulsion suspension was sonicated (Bandelin Sonopuls HD 2070, Berlin, Germany) for 6 × 60 s pulses and 30 s cooling intervals between the pulses. The sonicated pre-emulsion suspension was stirred (150 RPM, 3.5 h) and then neutralized using 0.1 N NaOH to ensure the total consumption of BCA monomers. The blank nanoparticles were also synthesized with the above-mentioned method except that cisplatin was not added to the medium.

Here, 50 µL of the nanoparticle suspension (with and without cisplatin) was diluted to 1 mL in deionized water, and its absorbance was read at 620 nm using Malvern Zetasizer Nano ZS (ZEN 3600) (Malvern Instruments Ltd., Malvern, Worcestershire, UK).

To determine whether cisplatin was loaded physically or chemically into the nanoparticles, FTIR spectroscopy technique was used. Briefly, the suspension of cisplatin-loaded PBCA nanoparticles was centrifuged (20,000 RPM, 4 °C, 30 min), and the pellet was allowed to dry at room temperature. The dried pellet (2 mg) was mixed with bromide potassium (200 mg) and pressed. The obtained tablet was then analyzed using the FTIR instrument [Nicolet 740SX FTIR spectrophotometer with an MCT-B detector (Waltham, MA, USA)].

Drug release pattern was studied using the dialysis membrane method. For this purpose, the suspension of cisplatin-loaded PBCA nanoparticles was centrifuged (20,000 RPM, 4 °C, 30 min), and the pellet was obtained. The pellet, containing 5 mg cisplatin, was resuspended into 5 mL of fresh PBS buffer and transferred into a dialysis bag. Also, 5 mL of the standard cisplatin (1 mg/mL) was prepared in PBS and transferred to another dialysis bag. The bags were then separately immersed into 100 mL of PBS, as the acceptor medium, and stirred (150 RPM, room temperature). The water solubility of cisplatin is 1.0 mg/mL [63], confirming the maintenance of sink conditions during the experiment [17]. At the predetermined time intervals, 2 mL of PBS was replaced with 2 mL of fresh PBS, and the drug concentration in the samples was measured using the AAS method. The profile of drug release versus time was obtained using the Equation (3): where Wtotal and Wrelease are the amount of the loaded drug in nanoparticles and the amount of released drug from nanoparticles into the acceptor medium at different time intervals, respectively.

To evaluate the cytotoxicity effects of cisplatin and cisplatin-loaded PBCA nanoparticles, MTT assay was performed. For this purpose, ACHN and BHK-21 cells were cultured in RPMI-1640 medium supplemented with 10% FBS and 1% penicillin/streptomycin antibiotics at the density of 104 cells/well in 96-well plates. After 24 h incubation (humidified incubator, 5% CO2, 37 °C), the cells were treated with different concentrations of cisplatin (0, 2, 4, 8, 16, 32, 64, 128, and 256 µM) in the form of standard and loaded into PBCA nanoparticles, and the plates were incubated (5% CO2, 37 °C). Also, the cells were incubated with a combination of free cisplatin and blank PBCA nanoparticles, as a control, at the drug concentrations mentioned above and blank nanoparticles equivalent to the cisplatin-loaded PBCA treatments. After 24, 48, and 72 h incubation, the media were removed, 100 µL of MTT (0.5 mg/mL PBS) solution was added into the wells, and the plates were incubated (5% CO2, 37 °C) for further 3 h. The MTT solutions were then replaced with 100 µL of isopropanol to dissolve the formazan crystals. In this assay, the positive and negative control were the cells treated with SDS + 0.1 N HCl and the cells treated with complete media, respectively. Also, only complete media was considered as the background. The absorbance was then read at 570 nm using an ELISA reader, and cell viability was calculated using the Equation (4):
In addition, the half-maximal inhibitory concentration (IC50) of the formulations was calculated using GraphPad PRISM software version 8.00 (GraphPad Software, Inc., San Diego, CA, USA)). All experiments were performed in triplicate.

3.6. In Vitro Toxicity and Therapeutic Effects

Ferric nitrilotriacetate (FeNTA) solution was prepared as a carcinogen to establish kidney cancer according to the method described previously [64] with slight modifications. Briefly, ferric nitrate and nitrilotriacetic disodium salt were separately dissolved in 120 mM sodium bicarbonate to obtain 160-mM and 320-mM solutions, respectively. Then, the solutions were mixed at the volume ratio of 1:2 (100 RPM, room temperature), and pH 7.4 was adjusted with sodium bicarbonate. The administered doses of FeNTA solution were calculated based on the Fe-content existed in the FeNTA compound.

To develop kidney tumor, male Wistar rats (two weeks old, 70–80 g) were used. All animal experiments were approved by the Animal Experimental Committee of Pasteur Institute of Iran, Tehran, and all procedures were performed in accordance with the National Institute of Health Guidelines for the Care and Use of Laboratory Animals. Kidney tumor was established according to the previous study [65]. Briefly, the animals were pretreated with a single intraperitoneal injection of DEN (200 mg/kg). Fourteen days after DEN treatment, different FeNTA doses (3–9 mg FeNTA/kg) were administered intraperitoneally twice a week for 16 weeks, where the administered dose was initiated with 3 mg FeNTA/kg and gradually increased throughout the experiment, in which animals received 9 mg FeNTA/kg in 16th week.

3.6.2. In Vivo Anticancer and Toxicity Effects of the Formulations

Two weeks after the last FeNTA injection, the rats were randomly divided into three groups (n = 12) and received cisplatin, cisplatin-loaded PBCA nanoparticles, and PBS as the control group. Then, cisplatin (1 mg/kg) was administered intraperitoneally at the time intervals of 72 h for three weeks. One month after the last injection, the animals were sacrificed, and tumor size was measured. To evaluate the renal function, serum creatinine and BUN were measured using creatinine and BUN measurement kits (Pars Azmoon Company, Tehran, Iran) according to manufacturer’s instructions, and the results were expressed as mg/dL. Also, the toxicity effects of the formulations (cisplatin and cisplatin-loaded PBCA nanoparticles) were histopathologically studied in kidney, liver and lung tissues using the hematoxylin and eosin (H&E) staining method.

This study was performed in the Pilot Nanobiotechnology Department of Pasteur Institute of Iran; the authors express their thanks to all colleagues for their invaluable help. This research received no external funding. 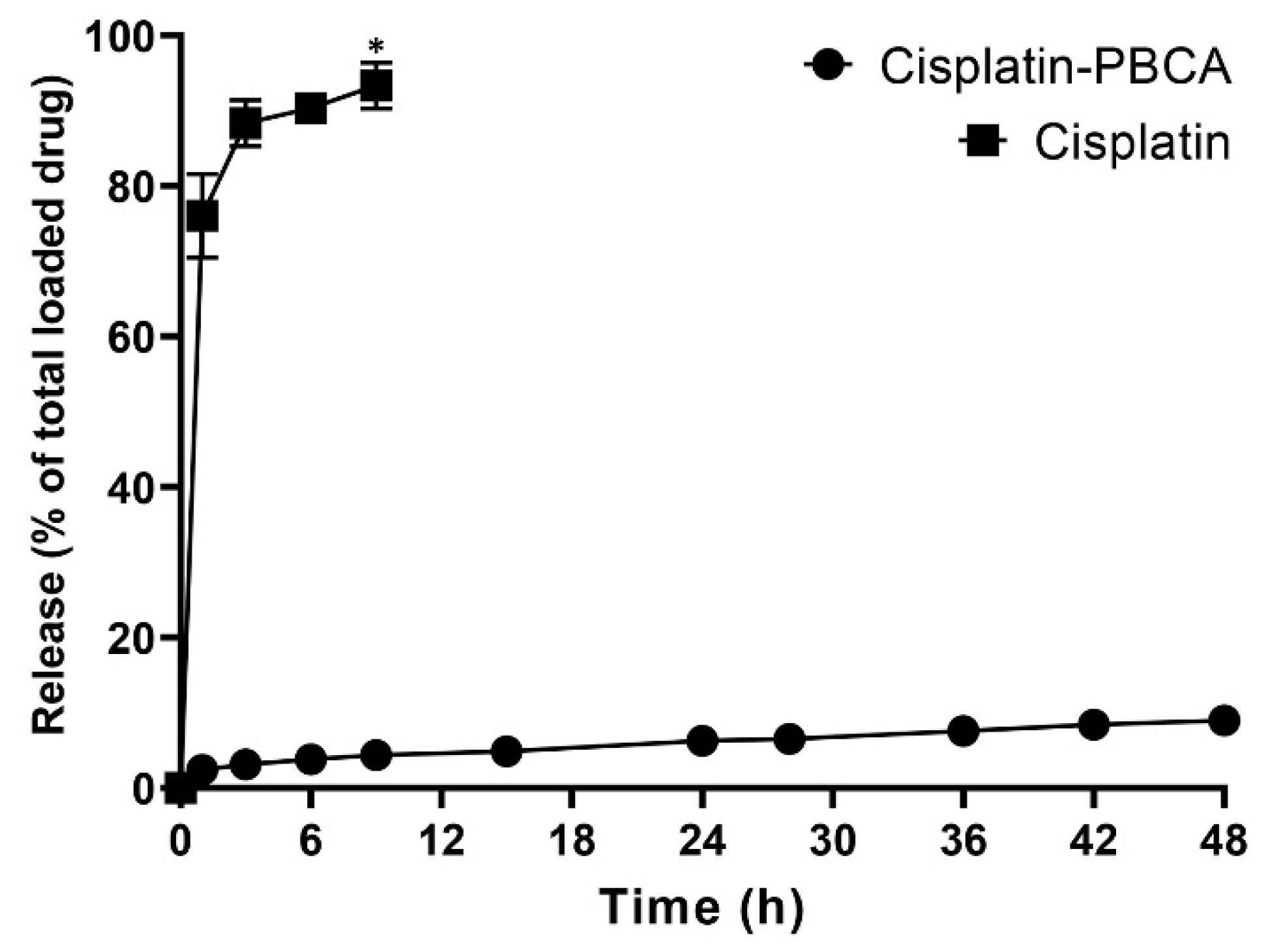 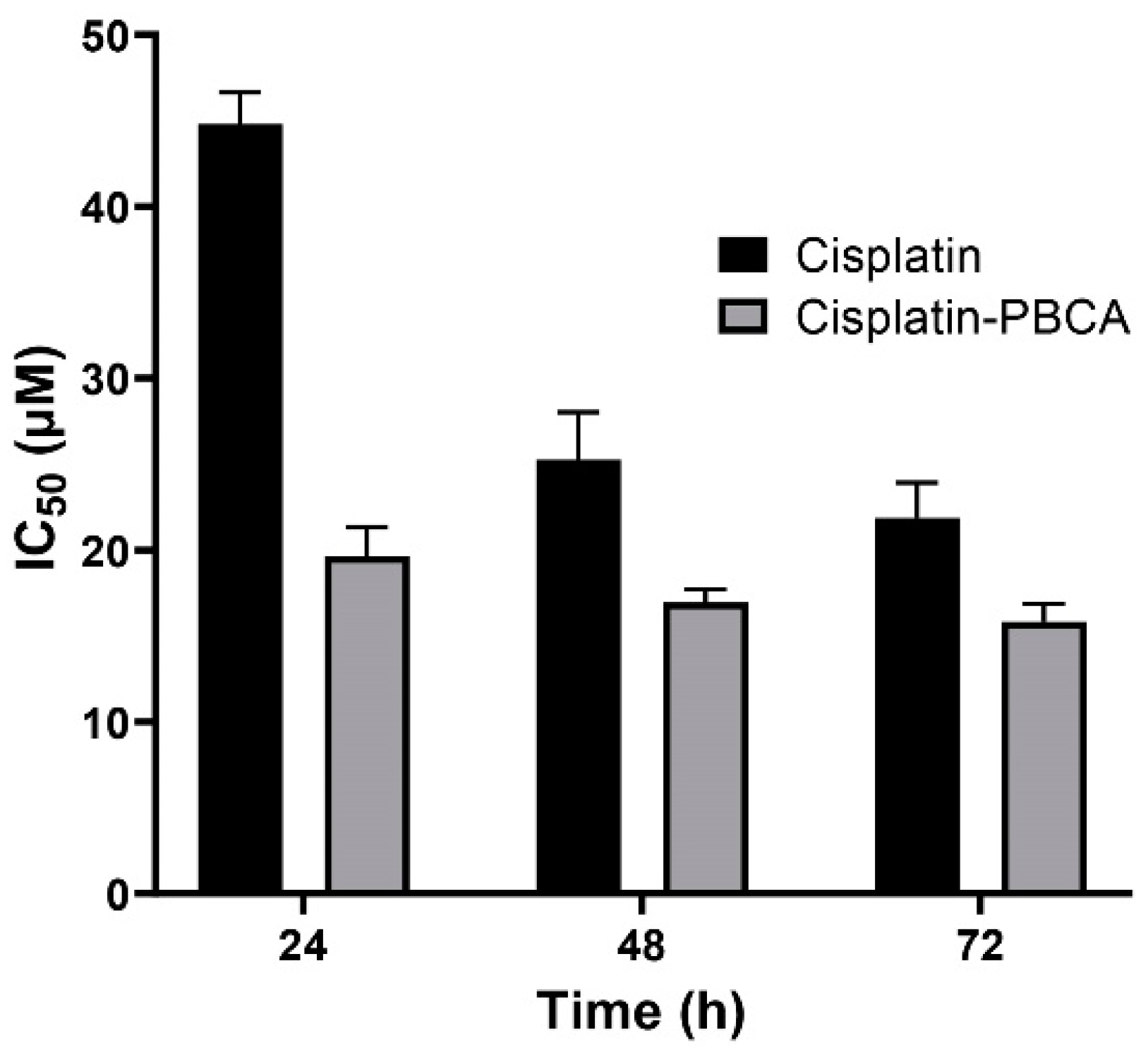 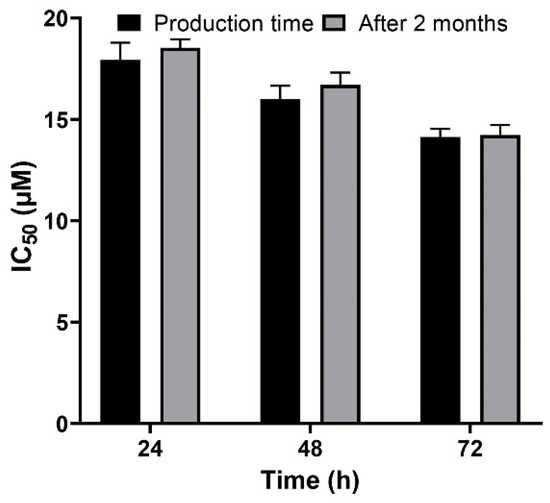