Bioisosteric Replacement as a Tool in Anti-HIV Drug Design

Imidazole and its derivatives are one of the most vital and universal heterocycles in medicinal chemistry. Owing to their special structural features, these compounds exhibit a widespread spectrum of significant pharmacological or biological activities, and are widely researched and applied by pharmaceutical companies for drug discovery. The van Leusen reaction based on tosylmethylisocyanides (TosMICs) is one of the most appropriate strategies to synthetize imidazole-based medicinal molecules, which has been increasingly developed on account of its advantages. In this review, we summarize the recent developments of the chemical synthesis and bioactivity of imidazole-containing medicinal small molecules, utilizing the van Leusen imidazole synthesis from 1977.
Keywords: van Leusen; TosMICs; imidazole; synthesis van Leusen; TosMICs; imidazole; synthesis

Imidazole ring, which is widely found in natural products and medical molecules, is one of the most prominent, five-membered, nitrogen-containing, heterocyclic scaffolds. Furthermore, imidazole-based heterocyclic compounds, which possess a vital position in medicinal chemistry, have been playing a central role in the treatment of numerous types of diseases, and new derivatives for medicinal use are being energetically developed worldwide [1,2,3,4,5]. Due to the peculiar structural characteristic of imidazole scaffold with a worthy electron-rich feature, it is advantageous for imidazole groups to combine with various receptors and enzymes in biological systems, through diverse weak interactions, thereby showing a variety of biological activities. At present, a legion of imidazole-containing compounds with high a medical potential as a clinical drug have been widely used to treat diverse types of illnesses, such as antibacterial [6,7], antifungal [8,9], anti-inflammatory [10,11], antiviral [12,13], anti-parasitic [14,15], anticancer [16,17], antihistaminic [18,19], and enzyme inhibition [20,21]. Imidazole and its derivatives encompass a vast range of medical activities, as shown in the following Table 1.
Owing to the significant pharmacological or biological activities and the enormous medicinal value of imidazole-based molecules, the synthesis of the imidazole-skeleton small molecule has been paid attention to by pharmaceutical chemists and organic synthesis researchers. However, there is still a need for a simple and efficient way to construct the imidazole heterocyclic skeleton. In recent decades, there have been numerous classical strategies for synthesizing this ring compound in the laboratory, including van Leusen imidazole synthesis [22], Debus-Radziszewski imidazole synthesis [23], Wallach imidazole synthesis [24], etc. Among these synthetic strategies, it is well-known that the van Leusen imidazole synthesis based on TosMICs, which is the cycloaddition reaction, is one of the most convenient and attractive protocols for the preparation of imidazole-based small molecules, due to its excellent advantages like simple manipulation, easily obtained raw materials and a wide range of substrates, which has been developed rapidly in the past decades (Scheme 1).
TosMIC, one of the most significant reactants, has many good features at room temperature, including being a stable solid and being odorless and colorless. Since it was introduced and applied in organic synthesis by the Dutch professor van Leusen in 1972, this reagent is also known as van Leusen’s reagent. Up to now, TosMIC and its derivatives have been recognized as one of the most significant building blocks in nitrogen heterocyclic synthesis, which have been fruitfully employed especially in the preparation of imidazole-based heterocycles [25,26,27,28,29].
Therefore, this review will summarize the developments of the synthesis of imidazole-based molecules, utilizing the van Leusen imidazole synthesis, based on TosMICs from 1977. It is expected that this review article will be beneficial for new opportunities to search for a reasonable design for less toxic and higher bioactive imidazole-containing drugs.

In 1977, van Leusen et al. first published that TosMIC and aldimine undergo a base-induced cycloaddition reaction in a proton solvent, meanwhile, the effects of R1 and R2 on the formation of 17 were qualitatively analyzed. They discovered that α-tosylbenzyl isocyanate and α-tosylethyl isocyanate 18 could form 1,4,5-trisubstituted imidazoles 19 (Scheme 2). Based on the various advantages of this reaction, it is widely named as the van Leusen imidazole synthesis [22].
As shown in Scheme 3, the van Leusen imidazole synthesis allows the preparation of imidazole through [3 + 2] cycloaddition reaction from aldimines and a reaction with TosMICs, which contain reactive isocyanide carbons, active methylene, and leaving groups such as C2N1 “3-atom synthon”. The cyano moiety can be a gradual cycloaddition to polarize a double bond under a base condition. The elimination of p-TosOH forms the intermediate 4-tosyl-2-imidazoline to produce the target 1,4,5-trisubstituted imidazoles 19, accompanied by the elimination of p-TosOH, which is negative to the obtained 1,5-disubstituted imidazoles.

In 2015, Fodili and collaborators described the synthesis of a 1,4-disubstituted 5-methylimidazole 121. As shown in Scheme 33, compound 121 was prepared by reacting enamine 119 with TosMIC 18, under the presence of tert-butylamine and a catalytic amount of bismuth (III) triflate in methanol. In this research, it was the first example of a usual rearrangement in the van Leusen imidazole synthesis and showed that the imidazole ring system can be prepared through reaction with TosMIC and a tautomeric enamine, to form a secondary ketamine. The possible mechanism involves the formation of the van Leusen imidazoline intermediate, followed by a C–C bond cleavage and then subsequent tosyl substitution [56].
In 2019, the Suresh group demonstrated the formation of imidazoles in the presence of water as a solvent and a base-free condition. The reaction of dihydro β-carboline imines 122 and p-toluenesulfonylmethyl isocyanides 18 formed the corresponding substituted N-fused imidazo 6,11-dihydro β-carboline derivatives 123, with good yields under mild and green condition (Scheme 34) [57].
A possible mechanism for the present metal- and base-free imidazole framework is shown in Scheme 35. Initially, the precursor dihydro β-carboline imine 122 acts as a base that captures proton from TosMIC 18, to provide a C-nucleophile, which would add to the dihydro β-carboline imine 122, and then be cyclized to form the intermediate 125 through the intermediate 124. Another molecule of the starting dihydro β-carboline imine 122 captures a proton from intermediate 125, then removes the tosyl group, which might result in the construction of imidazole derivative 123. Subsequently, the product imidazole 123 might also act as a base following the rational reaction mechanism, as described in Scheme 35.
At the same year, Necardo et al. found an unusual multicomponent synthesis of 4-tosyl-1-arylimidazoles 127, by considering aryl azides as the electrophilic partners for the TosMIC 18-mediated van Leusen cycloaddition. In this transformation, it is the first example of the reaction of two TosMIC molecules participating in van Leusen imidazole synthesis (Scheme 36) [58].
A plausible scenario for the MCR is shown in Scheme 37. In the initiation step, the TosMIC anion attacks N-3 of the azide 128 to produce intermediate 129. Then, N-1 intercepts the isocyanide in a 6-endo-trig cyclization to form anion 130, which is quenched by a proton source to give 131. Owing to its instability, compound 131 processes a [4 + 2] cycloreversion to formation 132, with a loss of nitrogen. Subsequently, the imine of 132 passes through an attack by a second molecule of the TosMIC anion, followed by ring closure, to produce 133. At this point, after protonation, intermediate 134 regains aromaticity via a base-assisted mechanism, with the expulsion of the most acidic proton and loss of hydrogen cyanide and sulfinate. Under strong basic condition, excess t-BuOK deprotonates the newly formed hydrogen cyanide, avoiding the release of toxic HCN. It is worth noting that the two molecules of TosMIC partake in the reaction mechanism in two different paths, with the second molecule in Scheme 37 undergoing a fragmentation resulting in the incorporation of a C−H into the target molecule.
In 2019, the one-pot three-component van Leusen chemistry was used for the DNA-encoded libraries (DELs) synthesis by the Staz group, which provided the first published DNA-compatible approach to form unusual highly functionalized imidazoles. The target DEL productions 138 were obtained from the aldehyde functionalized DNA molecule 136, amine 137, and TosMIC derivatives 18 by the van Leusen reaction. Moreover, a wide variety of amines, commercial TosMIC molecules and aldehyde as the variety element in the three ingredients heterocyclization were investigated under an optimized condition, respectively. This transformation meaningfully expanded the application of van Leusen imidazole synthesis and DNA compatible chemistries (Scheme 38) [59].

In summary, under the in-depth research and application in imidazole-based medicinal chemistry and the progress in other disciplines—such as cell biology, molecular biology, pharmacology, and organic chemistry—an increasing number of imidazole-containing drugs with lower toxic, better efficacy, superior pharmacokinetic characteristics, effective pathologic probes and diagnostic agents would be used in clinics. This could make remarkable contributions for the protection of mankind’s health. Therefore, the van Leusen imidazole synthesis based on TosMICs will play an increasingly central part in the synthesis of bioactive compounds as clinic drugs in drug design and synthesis. We could focus on the changing of the various aldimine groups and TosMIC derivatives in the van Leusen reaction to modify the imidazole derivatives in future. Above all these have clearly indicated the infinite potentiality of van Leusen imidazole synthesis in medicinal chemistry. Additionally, we hope this review would build a full foundation and reference source which would open up new thoughts for researchers to focus on in imidazole-based medicinal molecule design and synthesis chemistry.

All authors wrote the paper. All authors have read and agreed to the published version of the manuscript.

Financial support of this research provided by the Science and Technology Planning Project of the Jilin Province (20160414015GH) is greatly acknowledged. 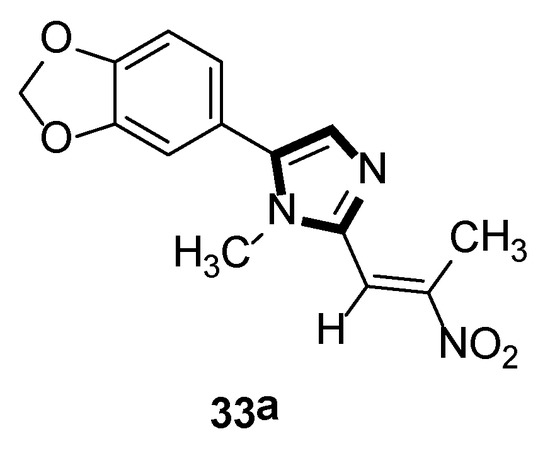 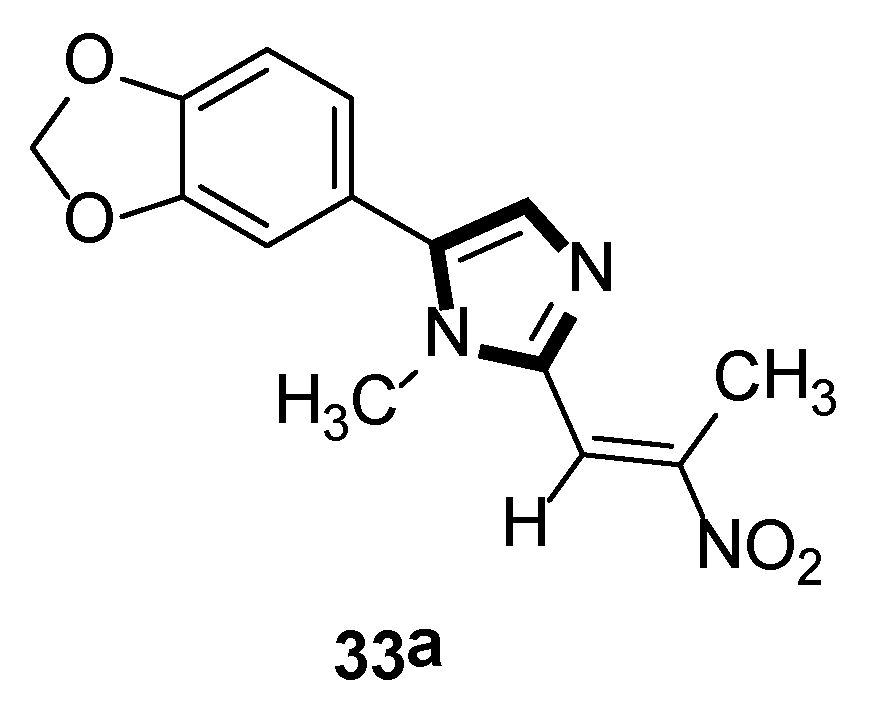 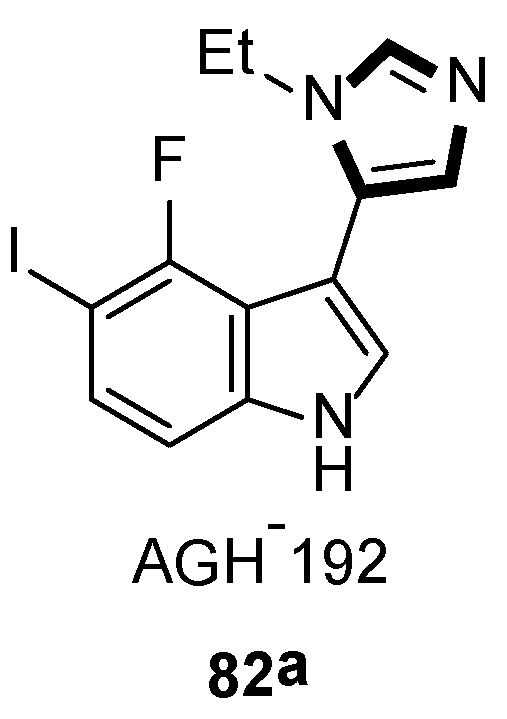 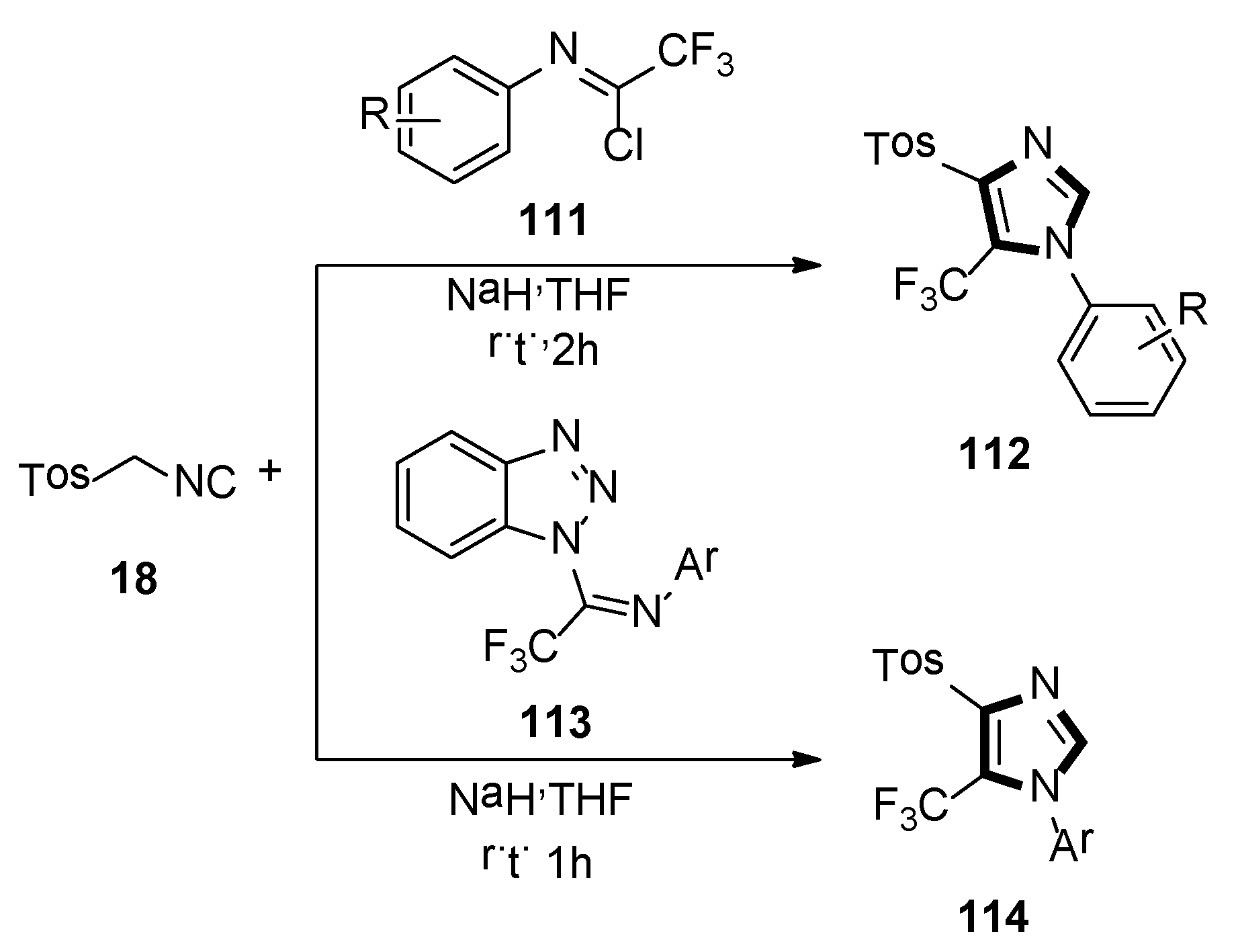