Ovarian cancer, the most lethal gynecological cancer, is the second most common malignancy after breast cancer in women over the age of 40 [1]. About 80% of all ovarian cancers are of the high-grade serous type, arising from the serous epithelial layer in the abdominopelvic cavity [2]. Since most ovarian cancers are diagnosed at advanced stages, they have a poor prognosis, and a low overall survival rate [3]. Moreover, the survival rate of patients with ovarian cancer has barely changed since platinum-based treatment was introduced more than 30 years ago [4]. Therefore, there is an important need for new strategies to treat ovarian cancers and a better understanding of the molecular events leading to the resistance of treatment.
Forkhead box M1 (FOXM1), a member of the Forkhead box transcription factor family, is an oncogenic transcription factor, and its overexpression is associated with poor prognosis in several types of human cancers, such as pancreatic cancer, breast cancer, and lung cancer [5,6,7]. FOXM1 is involved in cell cycle progression through regulation of gene expression in the G1/S and G2/M phases and by inducing the proper execution of the mitotic program [8,9,10]. Moreover, FOXM1 plays an important role in the early stage of metastasis, by stimulating the expression of genes associated with the invasion and migration of cancer cells [11,12,13]. FOXM1 also increases the population, proliferation, and motility of cancer stem cells, which make cancers tolerant to drugs like cisplatin [14,15]. Hence, targeting FOXM1 could be effective for treating several cancers and sensitizing drug-resistant cancer cells.
Rosmarinic acid methyl ester (RAME), a derivative of rosmarinic acid (RA), has several biological effects, such as anti-microbial, anti-inflammatory, and anti-allergic effects [16,17,18]. RAME also exhibits anti-oxidant and anti-melanogenesis in vivo [19]. Recently, the anti-cancer effect of RAME via the inhibition of mTOR-S6K1 signaling in cervical cancer was reported [20]. It was also reported that RAME induced the apoptosis of cervical cancer cells and enhanced the anti-tumor effect of cisplatin in cervical cancer. However, the regulation of gene expression by RAME treatment and the mechanisms through which gene expression is regulated, are unclear.
Here, we performed RNA-sequencing in RAME-treated ovarian cancer cells. Differentially Expressed Gene (DEG) analysis and Gene Ontology (GO) analysis suggest that the expression of mitosis-associated genes known to be regulated by FOXM1 were downregulated. Treatment of ovarian cancer cells with RAME effectively inhibited the binding of FOXM1 to its target gene promoters by decreasing the FOXM1 expression. We also observed that RAME repressed the migration and invasion of ovarian cancer cells. Moreover, co-treatment with RAME and cisplatin sensitized a cisplatin-resistant ovarian cancer cell line and induced the expression of apoptosis-associated genes. Collectively, our studies suggested that RAME, a derivative of rosmarinic acid, has the potential for use as a therapeutic substance for patients with ovarian cancer, especially for those with cisplatin-resistant tumors.

Previously, it was reported that RAME induced the autophagy and apoptosis of cervical cancer cells [20]. To further elucidate the molecular pathways demonstrating its anti-tumor effects against ovarian cancer, we performed the RNA-sequencing of RAME-treated SKOV-3 ovarian cancer cells. Since 40 µM of RAME treatment showed apoptotic effects in cervical cancer cells [20], we treated another ovarian cancer cell line, SKOV-3, with 40 µM of RAME. As shown by the RNA-sequencing data, 2789 differentially expressed genes (DEGs) were identified, including 1337 upregulated genes and 1452 downregulated genes (Figure 1A). We selected 242 downregulated genes (|log2 (Fold change)| > 1, p-value < 0.05), and gene ontology (GO) analysis of the RNA-sequencing data using the Enrichr tool revealed that the RAME treatment downregulated the target genes of the transcription factor Forkhead box M1 (FOXM1) (Figure 1B, Supplementary Table S1). In ovarian cancer, the gene expression level of FOXM1 was higher than normal tissue (Figure S1). FOXM1 promotes cell proliferation and migration by regulating the expression of its target genes [21,22,23,24,25,26,27]. These target genes included CCNB1, CENPF, TOP2A, and UBE2C, and were downregulated, as per our RNA-sequencing data. Therefore, we confirmed the mRNA expression levels of FOXM1-targeted genes following RAME treatment for 24 h, using RT-qPCR. SKOV-3 cells were treated with various doses of RAME, and the mRNA expression levels of CCNB1, CENPF, TOP2A, and UBE2C decreased significantly in a dose-dependent manner (Figure 1C). In addition, the mRNA expression levels of FOXM1 target genes were decreased in RAME-treated TOV-21G cells (Figure 1D). Altogether, these data indicated that RAME treatment suppressed the expression of FOXM1 target genes that were associated with enhancing cell migration in ovarian cancer cells.

2.2. RAME Inhibits Expression of FOXM1 and its Interaction with Target Genes

To figure out whether RAME inhibits the mRNA expression of the FOXM1 target genes by regulating FOXM1 expression, we investigated FOXM1 protein levels in ovarian cancer cell lines treated with RAME. Immunoblot analyses showed that treatment with 40 µM RAME for 24 h decreased the protein levels of FOXM1 in SKOV-3 and TOV-21G cells (Figure 2A,B). We next assessed the direct binding of FOXM1 to the promoters of the downregulated genes through chromatin immunoprecipitation (ChIP)-qPCR using FOXM1 antibodies. The ChIP-qPCR analysis indicated that RAME treatment (40 μM) decreased the enrichment of FOXM1 at the promoters of CCNB1 and UBE2C (Figure 2C,E). Furthermore, ChIP-qPCR using H3 acetylation (H3Ac) antibodies was performed to unravel the epigenetic regulatory mechanisms. H3 acetylation at the promoters of CCNB1 and UBE2C was reduced following the RAME treatment, causing a downregulation in gene expression (Figure 2D,F). These results indicated that RAME reduced FOXM1 target gene expression via the regulation of FOXM1 expression and the occupancy of FOXM1 at the promoters of FOXM1 target genes, as well as by inhibition of H3 acetylation.

The total RNA of SKOV-3 cells was isolated using the Trizol reagent (Invitrogen, Carlsbad, CA, USA). For the gene expression profiling, RNA-sequencing was performed at Ebiogen Inc. (Seoul, Korea). RNA quality was assessed with an Agilent 2100 Bioanalyzer using the RNA 6000 Nano Chip (Agilent Technologies, Amstelveen, The Netherlands), and RNA quantification was performed using an ND-2000 Spectrophotometer (Thermo Fisher Scientific, Waltham, MA, USA). For the RNAs of DMSO- and RAME-treated SKOV-3 cells, a library was constructed using the QuantSeq 3′ mRNA-Seq Library Prep Kit (Lexogen Inc., Vienna, Austria), according to the manufacturer’s instructions. In brief, 500 ng of total RNA was prepared and an oligo-dT primer containing an Illumina-compatible sequence at its 5′ end was hybridized to the RNA; reverse transcription was then performed. After degradation of the RNA template, second strand synthesis was initiated by a random primer containing an Illumina-compatible linker sequence at its 5′ end. The double-stranded library was purified using magnetic beads to remove all reaction components. The library was amplified to add the complete adapter sequences required for cluster generation. The finished library was purified from the PCR components. High-throughput sequencing was performed as single-end 75 sequencing using NextSeq 500 (Illumina Inc., San Diego, CA, USA). QuantSeq 3′ mRNA-Seq reads were aligned using Bowtie2 [52]. Bowtie2 indices were either generated from the genome assembly sequence or the representative transcript sequences for alignment to the genome and transcriptome, respectively. The alignment file was used for assembling transcripts, estimating their abundance, and detecting the differential expression of genes. Analysis of the relationship between differentially expressed genes was performed with the Excel-based Differentially Expressed Gene Analysis (ExDEGA v.2.0.0) software by eBiogen (ebiogen.com). Differentially expressed genes with fold changes >2 and p-values < 0.05 were further identified by GO analysis using the Enrichr tool [53,54].

To extract the total protein, cells were lysed using a Pro-Prep reagent (iNtRON Biotechnology, Seongnam, Korea). Each sample contained the same amounts of protein, as determined by quantifying the protein contents in the lysates. The samples were loaded and separated via SDS-polyacrylamide gel electrophoresis (PAGE). Proteins were transferred onto polyvinylidene difluoride (PVDF, Millipore, Temecula, CA, USA) membranes using the wet transfer method. The membranes were blocked using 5% skim milk for 1 h; then, they were incubated overnight with primary antibodies at 4 °C. After incubation with the primary antibodies, the membranes were incubated with horseradish peroxidase-conjugated secondary antibodies for 1 h (Millipore, Temecula, CA, USA). The signals were detected using chemiluminescence reagents (AbClon, Seoul, Korea) and quantified using ImageJ software.

Cells were crosslinked with 1% formaldehyde in PBS. Then, the crosslinked samples were sheared by sonification to obtain chromatin fragments that were 200–500 bp in size. The sheared chromatin fragments were incubated overnight at 4 °C with antibodies and magnetic beads, except for 2% input DNA. After immunoprecipitation, the chromatins were de-crosslinked at 65 °C, followed by the addition of RNase A and Proteinase K. DNA was purified from the samples and subjected to PCR as a template. The result was expressed as IP/Input (2%). The primers for the Chromatin Immunoprecipitation (ChIP) assay were the targets of the promoters of each gene, and the sequences were as follows: CCNB1 forward, 5′-CGCGATCGCCCTGGAAACGCA-3′; CCNB1 reverse, 5′-CGCGATCGCCCTGGAAACGCA-3′; UBE2C forward, 5′-CATTGGCTGGATCAAACCCA-3′; UBE2C reverse, 5′-GGAGAACACGACTGCAACTG-3′.

Cells were grown on 6 well plates until 100% confluence, followed by scratch with a 200 µL pipette tip. After washing with PBS to remove the floating cells, the cells were incubated in a medium with RAME, at concentrations of 0, 20 and 40 µM for 24 h. Gap width between the migrated cells was estimated in 4 random fields, under microscope, and averaged.

A cell migration assay was performed using the Transwell chamber inserts (24-well; Corning Incorporated, Corning, NY, USA) in a 24-well plate. The upper membranes were coated with Geltrex (Life Technologies, Carlsbad, CA, USA) as a barrier (100 µL/well) for the invasion assay. Then, 5 × 104 cells suspended in 100 µL of culture medium containing 1% FBS were added to the upper chamber. Culture medium containing 20% FBS was placed in the bottom chamber. The cells were incubated for 24 h at 37 °C. After incubation, the inserts were removed from the plate and fixed with 100% methanol for 2 min, followed by staining with crystal violet for 25 min. The cells on the upper surface of the insert were wiped off with a cotton swab. The cells that migrated to the lower layer of the microporous membrane were counted under a microscope. Five fields in each sample were randomly selected and the mean values were calculated.

A cell viability assay was performed using PrestoBlue™ (Invitrogen, Carlsbad, CA, USA; A13261) in a 96-well plate. The cancer cell lines were cultured at a density of 1 × 104 cells per well. After incubation for 24 h at 37 °C, the cells were treated with 0–100 µM of cisplatin for 24 h, and the wavelength absorbance test was performed using Cytation™ 5 Cell Imaging Multi-Mode Reader (Biotek, Winooski, VT, USA). 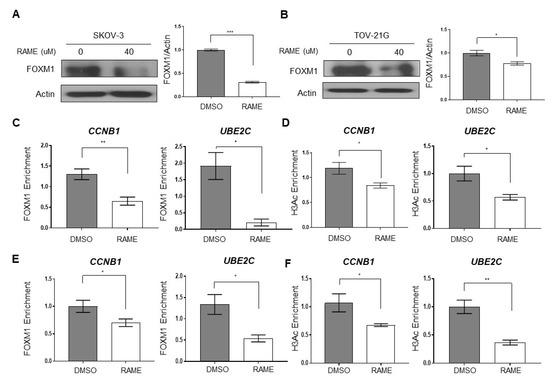 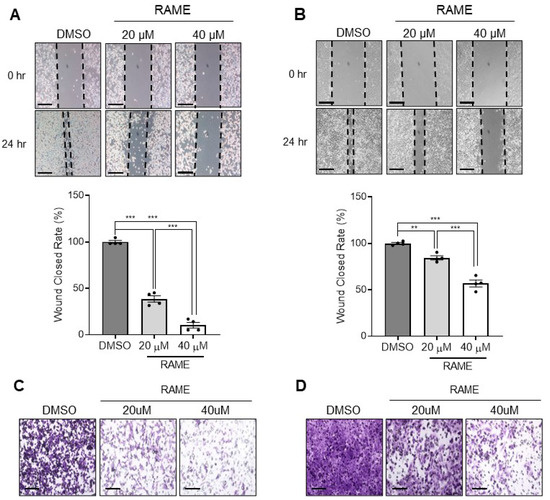 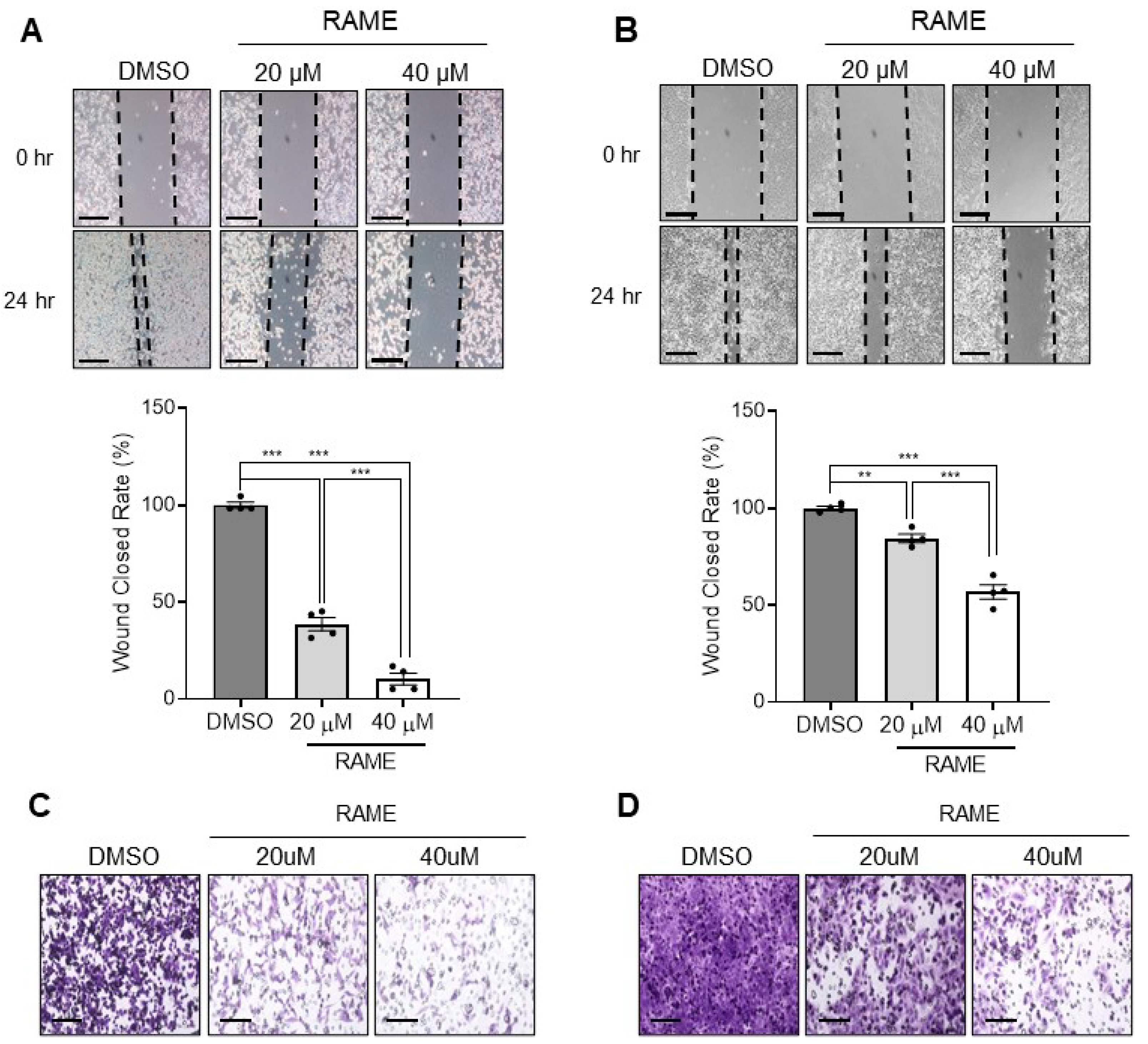 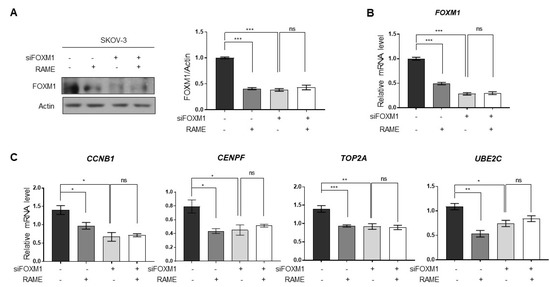 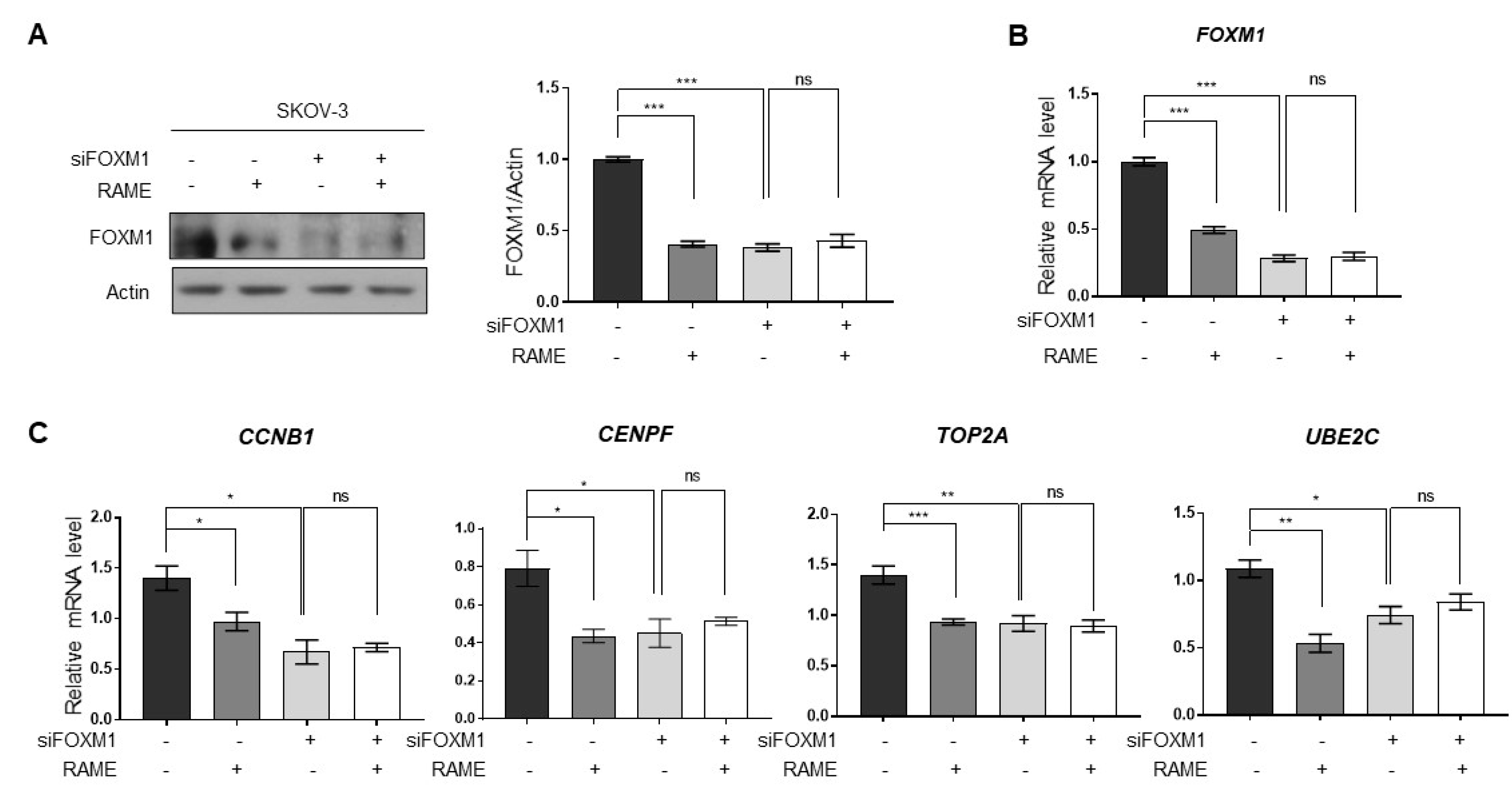 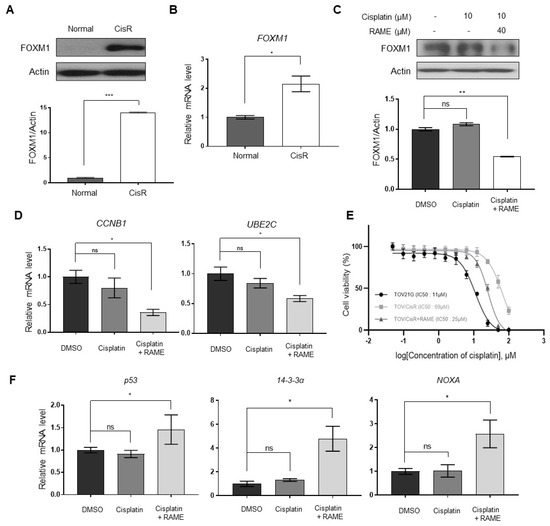 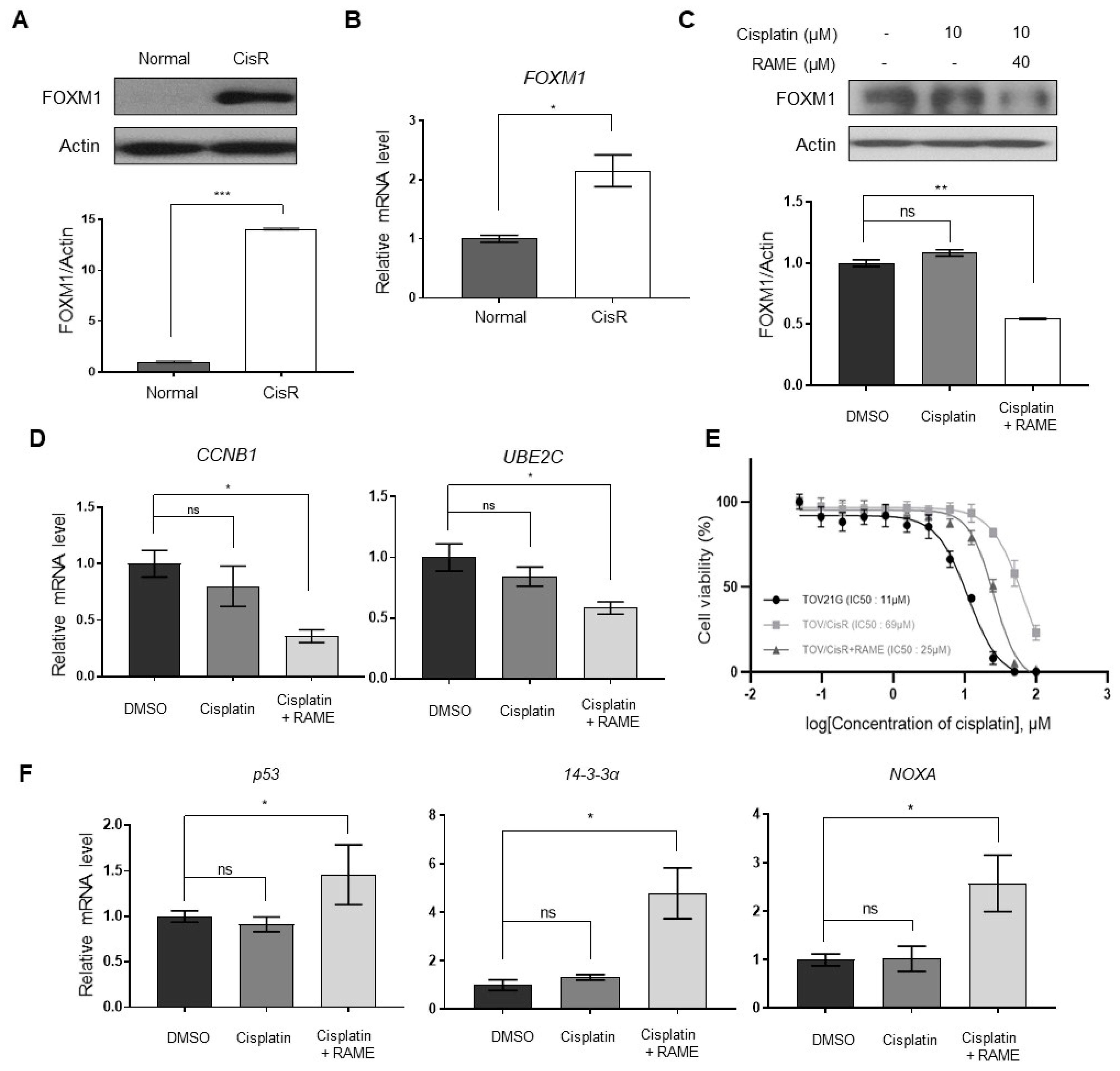