Therapeutic Advances Against ZIKV: A Quick Response, a Long Way to Go
Previous Article in Journal

Zika virus (ZIKV) is a member of the Flaviviridae family and Flavivirus genus [1]. The flavivirus genus is the largest among the Flaviviridae family with 53 different species [2] and can be further divided into non-vector, tick-borne, and mosquito-borne clusters [1]. Mosquito-borne flaviviruses such as ZIKV, dengue virus (DENV), West Nile virus (WNV), yellow fever virus (YFV), and Japanese encephalitis virus (JEV), have become an increasing public health concern over the last decade since their global incidence has grown dramatically.
ZIKV (strain MR 766) was first isolated in 1947 [3] from serum samples of a Rhesus monkey during investigation on YFV in the Zika forest of Uganda. In 1948, the virus was isolated from a pool of Aedes Africanus (Stegomyia) mosquitoes in the same forest [4]. The first human cases of ZIKV infections were reported in Africa in the 1950s [5] and later in Asia but remained restricted to these regions until 2007, when a large outbreak occurred in Yap Island, Federated States of Micronesia followed by outbreaks in French Polynesia, New Caledonia, and the Cook Islands in 2013 and 2014 [6]. In May 2015, ZIKV spread across the Pacific Ocean and was introduced in Brazil where it caused more than one million cases [7]. As of May 2019, the virus rapidly spread to 84 countries, territories or subnational areas, and became a public health problem worldwide [8].
ZIKV infection is usually asymptomatic or produces a relatively mild illness with an uneventful recovery [6]. However, during the 2015 epidemics in South America, ZIKV became a global health threat, showing increased virulence, rapid spread, and an association with severe neurological complications such as an unexpected rise of microcephaly cases in fetuses and newborns and a remarkable increase in Guillain–Barré syndrome cases [8,9]. ZIKV is transmitted to people primarily through the bite of infected female Aedes species mosquitoes (i.e., Aedes aegypti and Aedes albopictus) [10,11]. ZIKVs can infect different tissues including reproductive tissues and organs [12,13,14]. In males, ZIKV can infect testes, the prostate, and seminal vesicles [14,15], whereas in females it can infect the vagina, uterus, vaginal epithelium, uterine fibroblasts, trophoblasts, and endothelial cells from the placenta [14,16]. Therefore, direct human–to–human transmission of ZIKV can occur perinatally [17], sexually [18,19], and through breastfeeding [20,21] or blood transfusion [22,23].
To date, there is no vaccine or drug licensed to prevent or treat ZIKV infections. The aim of this review article is to provide an update on the search for anti-ZIKV agents.

The genome of ZIKV (strain MR 766) comprises a 10.8-kb single-stranded positive-sense RNA molecule that contains approximately a 100-nucleotide 5’ untranslated region (UTR), a single open reading frame (ORF) of 10 kb, and approximately 420 nucleotides in the 3’ UTR (Figure 1). The ORF codes for a large polyprotein precursor of 3423 amino acids that is later co- and post-translationally cleaved into three structural (C, prM, and E) and eight nonstructural (NS1, NS2A, NS2B, NS3, S4A, 2K, NS4B, and NS5) proteins (Figure 1 and Table 1).
The structural proteins are responsible for forming the virus particle and are involved in virus entry, assembly, and release of new virions into the host cell. The capsid protein binds the genomic RNA to form the nucleocapsid core, and the E and prM glycoproteins are viral surface proteins attached to the host-derived lipid envelope.
The non-structural proteins form the viral replication complex inside the host cell [24]. NS3 and NS5 proteins have enzymatic activities. NS3 encodes serine protease [25,26], RNA helicase [27], nucleoside triphosphatase (NTPase) [28], and RNA triphosphatase (RTPase) [29] enzymatic activities. NS3 is well conserved among the Flaviviruses, with amino acid sequence identity of about 65% between ZIKV, WNV, JEV, and YFV. The NS3 protein contains two domains, an N-terminal protease domain and a C-terminal helicase domain, which are connected via a short linker. Due to the multiple roles played by the NS3 protein in virus life cycle, this protein is an attractive target for antiviral drug discovery. NS5 encodes methyl- and guanylyltransferase (MTase and GTase) enzymatic activities as well as an RNA-dependent RNA polymerase (RdRp) [30]. NS2A, NS2B, NS4A, 2K, and NS4B are transmembrane proteins located within the endoplasmic reticulum (ER) membrane [31]. Some regions of NS2B, NS4A, and NS4B also interact with NS3 and thus anchor the replication complex formed by NS3 and NS5 to the ER membrane [32]. Additionally, NS2B serves as an essential cofactor for the NS3 protease and NS4B blocks interferon α/β signaling [33]. NS4A induces ER membrane rearrangements that are involved in forming the viral replication compartments [34] while NS1 is thought to be involved in genome replication by associating with the luminal side of replication compartment and immune evasion through modulation of host defense mechanism [35].
The replicative cycle of ZIKV is similar to other known flaviviruses (Figure 2). Briefly, the E proteins are involved in the attachment of the virus to receptors on the host membrane, then the virus is internalized via endocytosis [36] mediated by a clathrin protein in a low pH environment. Several cell surface receptors, including the tyrosine-protein kinase receptor AXL, Tyro3, DC-SIGN, and TIM-1, facilitate ZIKV viral entry [37]. The viral genome is released into the host cytoplasm where it is translated, and the resulting polyprotein is proteolytically cleaved into various proteins, the structural and non-structural proteins (C, prM, E and NS proteins) as mentioned above [38,39]. The newly-synthetized (+) RNAs can be either recruited for further rounds of translation/replication or incorporated into the virions, which also initiates their assembly on ER membranes. Assembled virions enter and then travel through the secretory pathway, undergoing maturation along the way, until their final release into the extracellular space.

3. Potential Therapeutic Options for the Treatment of ZIKV Infection

So far, no specific antiviral is approved for the treatment of ZIKV infections. Acetaminophen is usually used to control fever and pain, anti-histamines are used for pruritic rashes, and fluids to prevent dehydration in ZIKV-infected patients. However, acetylsalicylic acid and non-steroidal anti-inflammatory drugs (NSAIDs) are contraindicated because of an increased risk of hemorrhagic syndrome reported with other flaviviral infections as well as the risk of Reye’s syndrome after viral infection in children and teenagers [11].
The current search for ZIKV antiviral options is being conducted through several different approaches which target different steps of the replication cycle: by screening of different compound libraries or by the repurposing of drugs with known active efficacy against other diseases and that are already being used in clinic. In addition, natural products [40,41] as well as antibody-based candidates [42,43] are being evaluated but are outside the scope of this review. Antivirals can be classified according to their mode of action in (i) direct-acting antivirals, directed against viral targets, or (ii) host-targeting antivirals, aimed at targeting cellular components needed for the viral cycle. Therefore, in the last few years, a large number of drugs and therapeutic candidates have been discovered or repurposed with ZIKV activity both in vitro and in pre-clinical studies and a few of them have been evaluated in clinical trials (Table 2).

4. Who Benefits from ZIKV Therapies?

In immunocompetent individuals, ZIKV infection is asymptomatic or produces a relatively mild illness with an uneventful recovery that can be treated with acetaminophen, anti-histamines, and fluids. However, due to the ability of ZIKV to infect fetuses and cause severe neurological disease, there is a need for anti-zika drugs that function during pregnancy and which are safe for both the pregnant mother and her fetus. Many FDA approved drugs have been tested for efficacy against ZIKV and can be repurposed for treating ZIKV infection in humans. In order to reach the fetus, these drugs must be able to cross the placental barrier and the blood–brain barrier to reach neural cells, the main targets of ZIKV. So far, however, no drug has been identified that is clinically safe for use in both pregnant women and fetus. The World Health Organization (WHO) recommends that niclosamide may be used during pregnancy as an anthelminthic agent (with anti-ZIKV activity) because it has not been shown to be mutagenic, teratogenic or embryotoxic (http://apps.who.int/medicinedocs/en/d/Jh2922e/3.1.3.html#Jh2922e.3.1.3). The US Centers for Disease Control and Prevention (CDC) further recommend that “for individual patients in clinical settings, the risk of treatment with niclosamide in pregnant women who are known to have an infection needs to be balanced with the risk of disease progression in the absence of treatment” (http://www.cdc.gov/parasites/hymenolepis/health_professionals/). In addition, niclosamide and other direct- or indirect-acting agents could be used to reduce viral load in infected men and nonpregnant women (potentially those at higher risk due to immunosuppression), reducing transmission and potentially preventing Guillain–Barré syndrome and other ZIKV-related neurological complications in humans.

In the last few years, researchers have invested efforts in the development of a vaccine and antiviral drugs for the prevention or treatment of ZIKV infections. However, there is still no approved vaccine or drug available for this emerging pathogen. Different approaches and methodologies have been used, from testing specific drugs with known antiviral activity for other viruses, to testing libraries composed of hundreds or thousands of bioactive compounds that have already gone through several steps of drug approval by regulatory agencies (repurposing drugs). Most antiviral candidates have been evaluated in vitro and some of them have also been tested in animal models. However, few candidates have advanced into clinical trials. Further development of novel compounds as well as combination therapies may open new avenues for the treatment of ZIKV-related diseases. 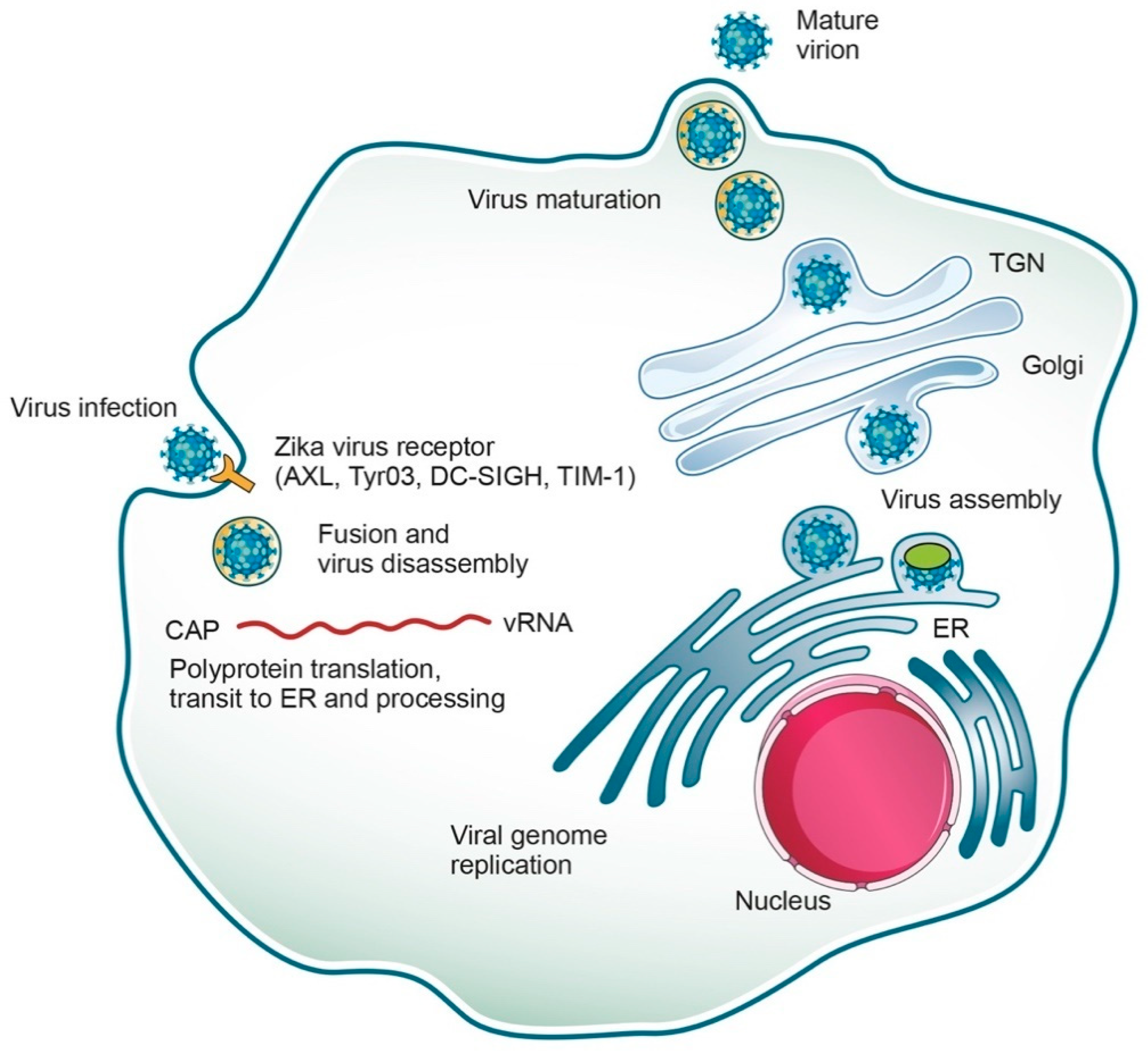