Iron is essential for life, while excess iron can be toxic. Iron generates hydroxyl radical, which is the most reactive free radical, causing oxidative stress. Since iron is absorbed through the diet but not excreted from the body, it accumulates with age in tissues, including the retina, consequently leading to age-related toxicity. This accumulation is further promoted by inflammation. Hereditary diseases such as aceruloplasminemia, Friedreich’s ataxia, pantothenate kinase-associated neurodegeneration, and posterior column ataxia with retinitis pigmentosa involve retinal degeneration associated with iron dysregulation. In addition to hereditary causes, dietary or parenteral iron supplementation has been recently reported to elevate iron levels in the retinal pigment epithelium (RPE) and promote retinal degeneration. Ocular siderosis from intraocular foreign bodies or subretinal hemorrhage can also lead to retinopathy. Evidence from mice and humans suggests that iron toxicity may contribute to age-related macular degeneration pathogenesis. Iron chelators can protect photoreceptors and RPE in various mouse models. The therapeutic potential for iron chelators is under investigation. View Full-Text
Keywords: chelation; iron; retina; age-related macular degeneration (AMD) chelation; iron; retina; age-related macular degeneration (AMD)
►▼ Show Figures 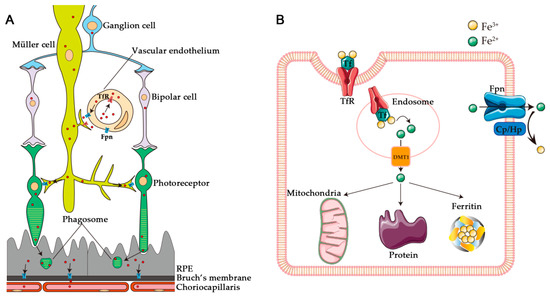