Epigallocatechin gallate (EGCG) has been recognized as the most prominent green tea extract due to its healthy influences. The high instability and low bioavailability, however, strongly limit its utilization in food and drug industries. This work, for the first time, develops amorphous solid dispersion of EGCG to enhance its bioavailability and physical stability. Four commonly used polymeric excipients are found to be compatible with EGCG in water-dioxane mixtures via a stepwise mixing method aided by vigorous mechanical interference. The dispersions are successfully generated by lyophilization. The physical stability of the dispersions is significantly improved compared to pure amorphous EGCG in stress condition (elevated temperature and relative humidity) and simulated gastrointestinal tract environment. From the drug release tests, one of the dispersions, EGCG-Soluplus® 50:50 (w/w) shows a dissolution profile that only 50% EGCG is released in the first 20 min, and the remains are slowly released in 24 h. This sustained release profile may open up new possibilities to increase EGCG bioavailability via extending its elimination time in plasma. View Full-Text
Keywords: epigallocatechin gallate; amorphous solid dispersion; physical stability; controlled release; bioavailability epigallocatechin gallate; amorphous solid dispersion; physical stability; controlled release; bioavailability
►▼ Show Figures 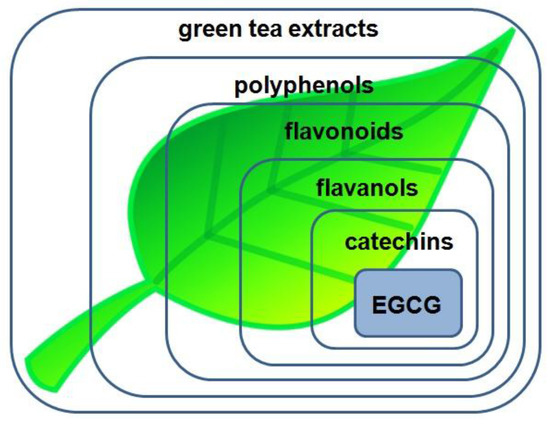