A Review of Recent Developments in Driver Drowsiness Detection Systems

:
The laser ranging interferometer onboard the Gravity Recovery and Climate Experiment Follow-On mission proved the feasibility of an interferometric sensor for inter-satellite length tracking with sub-nanometer precision, establishing an important milestone for space laser interferometry and the general expectation that future gravity missions will employ heterodyne laser interferometry for satellite-to-satellite ranging. In this paper, we present the design of an on-axis optical bench for next-generation laser ranging which enhances the received optical power and the transmit beam divergence, enabling longer interferometer arms and relaxing the optical power requirement of the laser assembly. All design functionalities and requirements are verified by means of computer simulations. A thermal analysis is carried out to investigate the robustness of the proposed optical bench to the temperature fluctuations found in orbit.
Keywords:
GRACE; laser interferometry; inter-satellite ranging; heterodyne readout

The Gravity Recovery and Climate Experiment (GRACE) mission [1], in orbit from March 2002 to the end of its science mission in October 2017, was a joint mission of the National Aeronautics and Space Administration (NASA) and the German Aerospace Center (DLR). Twin satellites, in a trailing formation flying ∼500 km above the Earth with a nominal separation of 200 km on a near polar orbit, mapped the variations of the Earth’s gravity field. The primary science instrument was an inter-satellite microwave ranging system in K/Ka-band that tracked the distance between the satellites and its rate of change with a sensitivity down to 0.1 m/s, enabling the detection of the tiny variations in the Earth’s gravitational pull over the trailing satellites. To continue observing the Earth’s varying gravity field, the Gravity Recovery and Climate Experiment Follow-On (GRACE-FO) mission [2] was launched in May 2018, again as a US–Germany collaboration.
A key feature of the GRACE-FO mission was the inclusion of the laser ranging interferometer (LRI) as a technology demonstrator to perform the range measurement with higher precision than its microwave counterpart. Using the range measurement data in combination with precise orbit determination via global positioning system (GPS) instruments and on-board accelerometers, scientists regularly construct a detailed monthly gravity field map of the Earth, providing a unique global view of the Earth’s surface mass distribution.
The GRACE and GRACE-FO observations reveal the effects of climate change over time, and enable future predictions, quantifying the loss of mass from ice sheets and glaciers, the contribution of water influx to sea level rise, as well as monitoring changes in underground water reserves, and in the hydrological cycle [3,4,5].
The LRI in the GRACE-FO enabled the first laser interferometer link between distant satellites, and provided range measurements with a sensitivity of 200 pm/ at 1 Hz, more than 3 orders of magnitude lower than the noise of the primary microwave ranging instrument [6]. The GRACE-FO LRI also served as a technology demonstrator for the ESA-NASA Laser Interferometer Space Antenna (LISA) mission [7], as well as the Chinese space-borne gravitational wave observatories Taiji [8] and TianQin [9] missions.
The GRACE-FO LRI, as a technology demonstrator and not the primary science instrument, had restrictions on its design, e.g., volume, mass, instrument accommodation, and relaxed requirements on reliability and lifetime. After the success of the GRACE-FO LRI, the next generation of gravity missions are expected to use laser interferometry as the primary measurement principle.
The optical bench (OB) is a central part of the LRI. Its primary purpose is to receive light from the remote satellite and combine it with a locally generated reference beam (LO) in order to extract their relative phase. The most promising phase measurement principle continues to be optical heterodyne detection [10,11,12]. In addition, the OB emits laser light with a well-defined phase that is obtained by phase locking to the received light. A secondary purpose of the OB is to measure the angle of the incoming light w.r.t. an OB frame of reference. This allows inference of the misalignment of the receiver S/C relative to the inter-satellite line-of-sight. This information is used in the LRI to actuate on the pointing of the transmitted beam to the remote S/C, and can be used in future missions to actuate in the attitude of the local S/C, in order to enhance the optical link power, keep the link stable, and minimize secondary noise sources.
In the GRACE-FO mission, the LRI OB followed an “off-axis” design [13], where the receiving (RX) light and the transmitting (TX) light propagate into and out of the OB through separate apertures, namely the RX and TX apertures, and follow different paths along the OB. This type of design can lead to instruments with fewer optical components compared to the “on-axis” topology, where the RX and TX beam paths coincide, and the OB features a single aperture (Figure 1). The on-axis topology requires using polarizing optics in order to optimally combine the RX and LO light at the photodetectors, potentially yielding a more complex optical setup. However, due to the shared optical path between the RX and TX beams, an on-axis design has the potential to use a single baffle and a single telescope for both RX light reception and TX light transmission. The OB design, based on a lens retroreflector proposed by Müller [11], and the design based on a corner cube retroreflector proposed by Mandel et al. [10], are both examples of on-axis topologies. For optical benches of space-borne interferometers with baselines longer than m, such as those proposed for gravitational wave detection missions, the on-axis OB topology is the scheme of choice.
In this paper, we present the design of an on-axis OB for laser ranging in future gravity missions. Our design presents the following features:
The paper is structured as follows: In Section 2, we detail the design of the proposed OB. In Section 3, we present the computer model of the optical bench and the results of simulating S/C angular motion, including an account of thermoelastic effects and refractive index variations due to in-orbit temperature fluctuations. Finally, in Section 4 we summarize our findings.

Following on the success of the GRACE-FO LRI, a US–Germany collaboration is conducting preparatory studies for advancing the LRI design and technology under the GRACE-ICARUS project [33]. In parallel, ESA has approved preparatory studies and instrument predevelopments for a Next-Generation Gravity Mission [17,34]. In this context, we have put forward an optical bench design for a next-generation LRI.
The design follows an on-axis topology in which the RX, TX and LO beams’ paths coincide. A series of Keplerian telescope imaging systems are configured to: i. achieve the retro-reflective function without the need for a retroreflector; ii. adapt the size of the received beam and the local oscillator beam to the active area of the quadrant photodiodes; and iii. adjust the size of the transmitted beam to match the size of the RX/TX aperture and decrease its divergence to relax the laser power requirements.
The imaging systems, in combination with an active steering mirror using differential wavefront sensing loops, ensure optimal overlap between the interfering RX and LO beams at the detectors, as well as near-perfect TX beam pointing to the remote S/C. The optimal RX/LO overlap maximizes the local carrier-to-noise ratio, and the accurate TX beam pointing maximizes the optical power at the remote S/C, regardless of the attitude of the local S/C.
The optical bench functionalities and limitations are demonstrated by means of a computer model using the IFOCAD C++ libraries. The coupling of the attitude of the local S/C to the inter-satellite range measurement is computed, and it is found to be well within the required level of m/rad. A thermal analysis accounting for the effects of thermoelastic expansion of the optical bench components and baseplate, and refractive index fluctuations of the optics, is carried out to verify the robustness of the proposed design against the temperature fluctuations expected in orbit.
The proposed layout uses a single telescope in the RX and TX beam path, enhancing the light collecting area and decreasing the TX beam far field divergence. Since this design requires only a single baffle, the footprint of the LRI in the S/C can be made smaller compared with off-axis designs, such as the GRACE-FO LRI, which hosted a retroreflector that was separate from the OB assembly, leading to significantly increased complexity of assembly and thermal control.
An experimental realization of the proposed OB design is being conducted at the Albert Einstein Institute, while the primary functions of the OB have been demonstrated via the optical simulations presented in this paper, several questions remain to be investigated experimentally, notably the coupling of polarization imperfections and fluctuations, and stray light, into the length and angular measurements.

This work has been supported by: the Chinese Academy of Sciences (CAS) and the Max Planck Society (MPG) in the framework of the LEGACY cooperation on low-frequency gravitational-wave astronomy (M.IF.A.QOP18098); The Deutsche Forschungsgemeinschaft (DFG, German Research Foundation, Project-ID 434617780, SFB 1464). Clusters of Excellence “QuantumFrontiers: Light and Matter at the Quantum Frontier: Foundations and Applications in Metrology” (EXC-2123, project number: 390837967); PhoenixD: “Photonics, Optics, and Engineering—Innovation Across Disciplines” (EXC-2122, project number: 390833453). 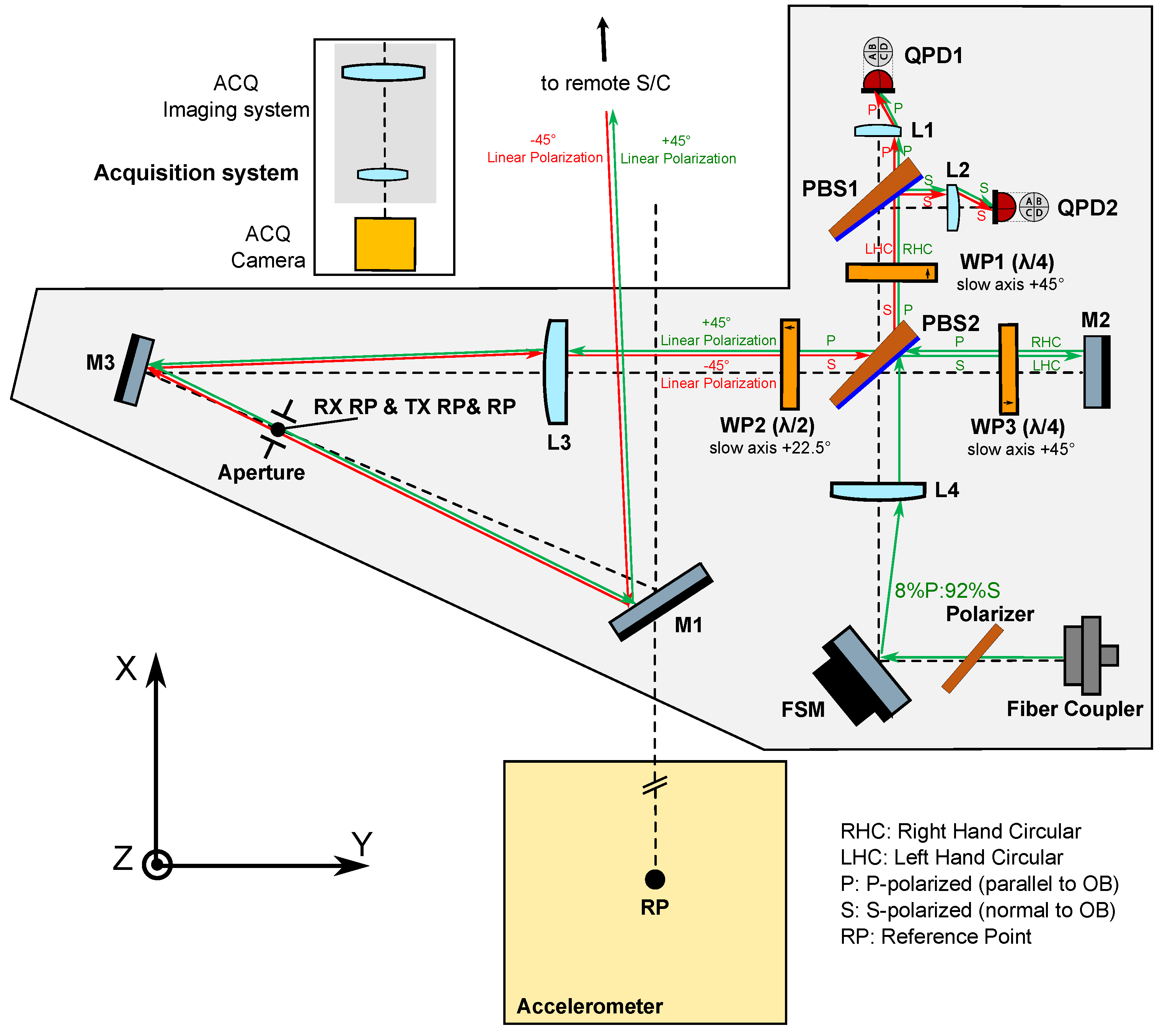 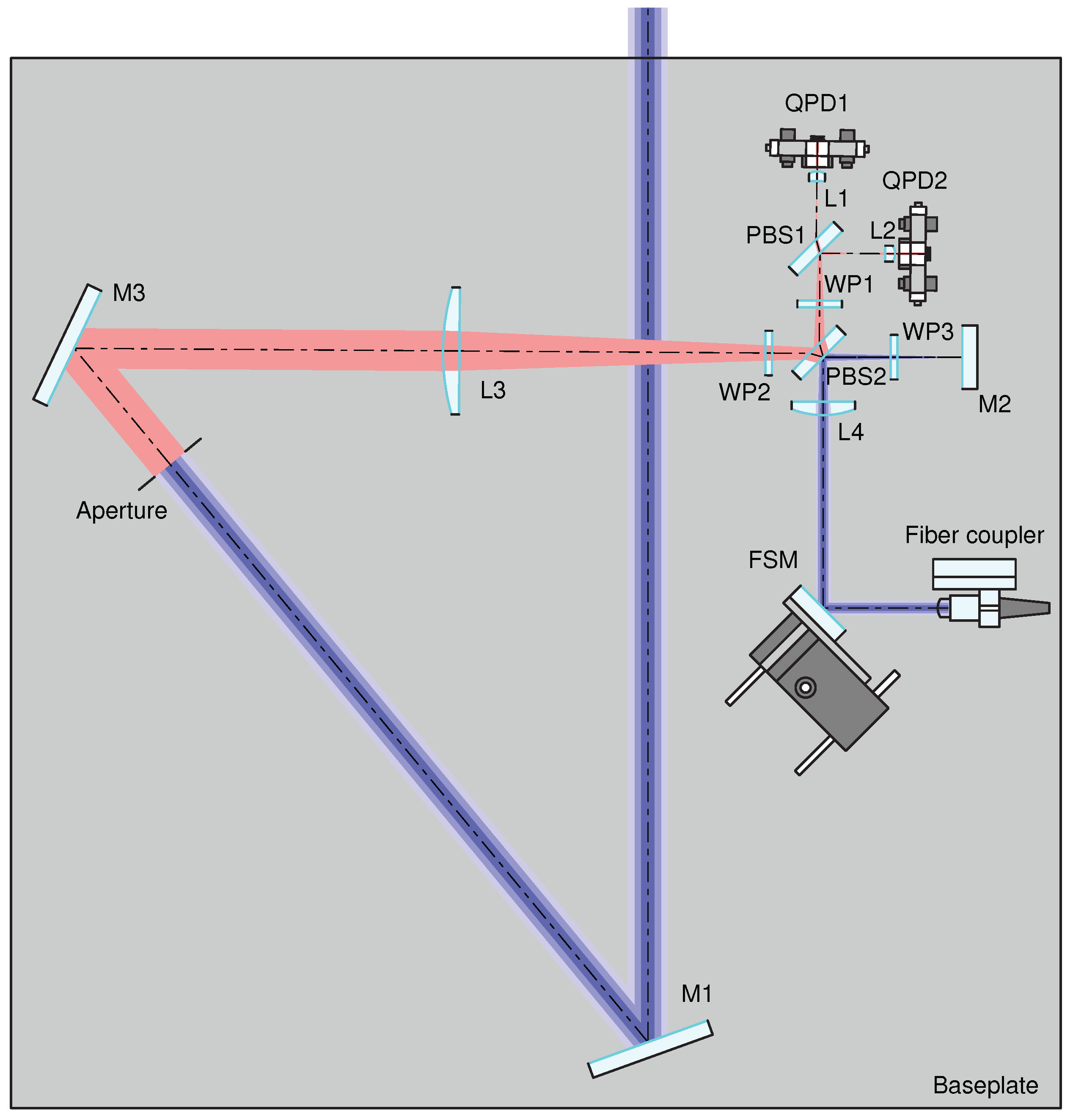 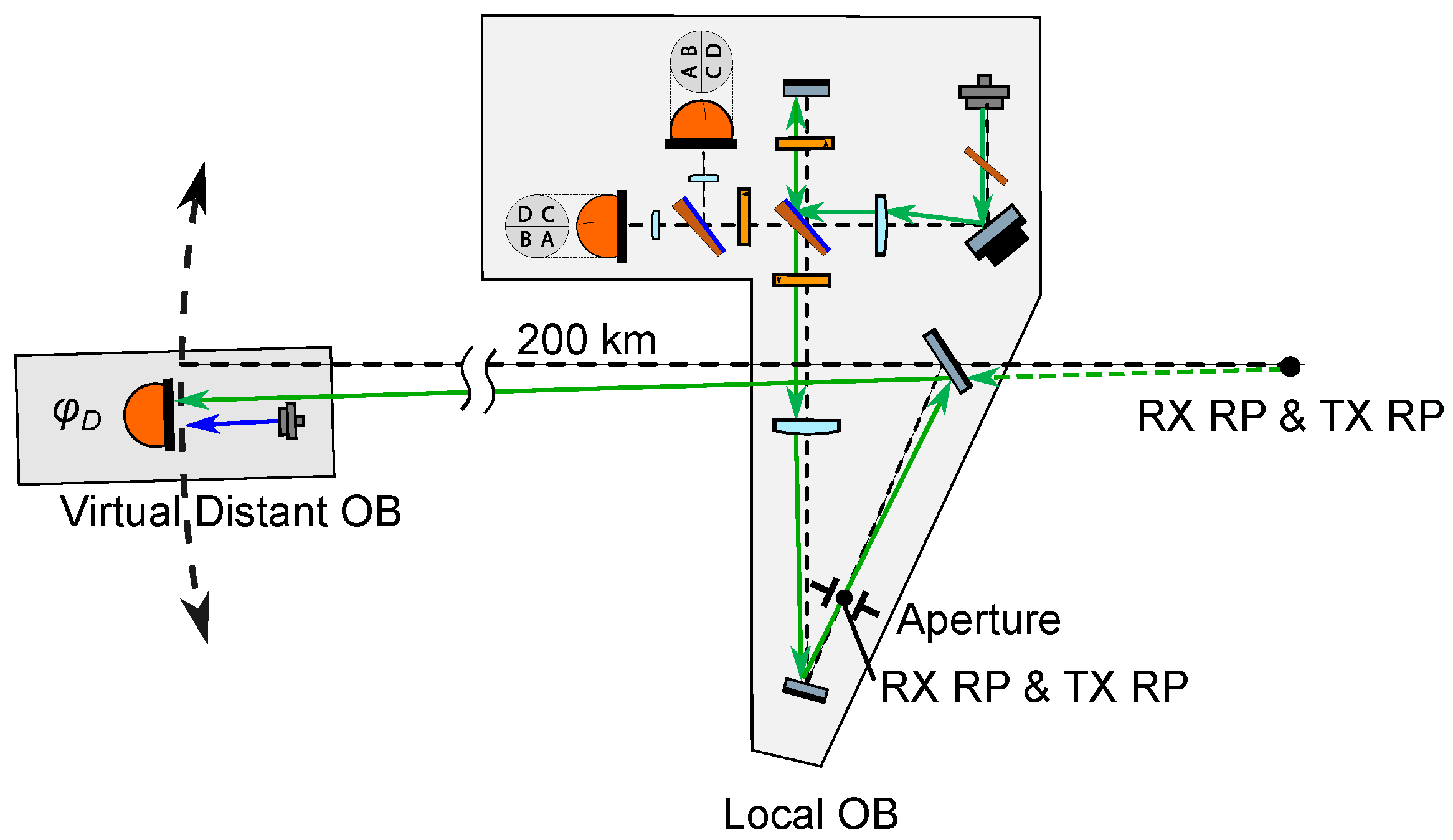 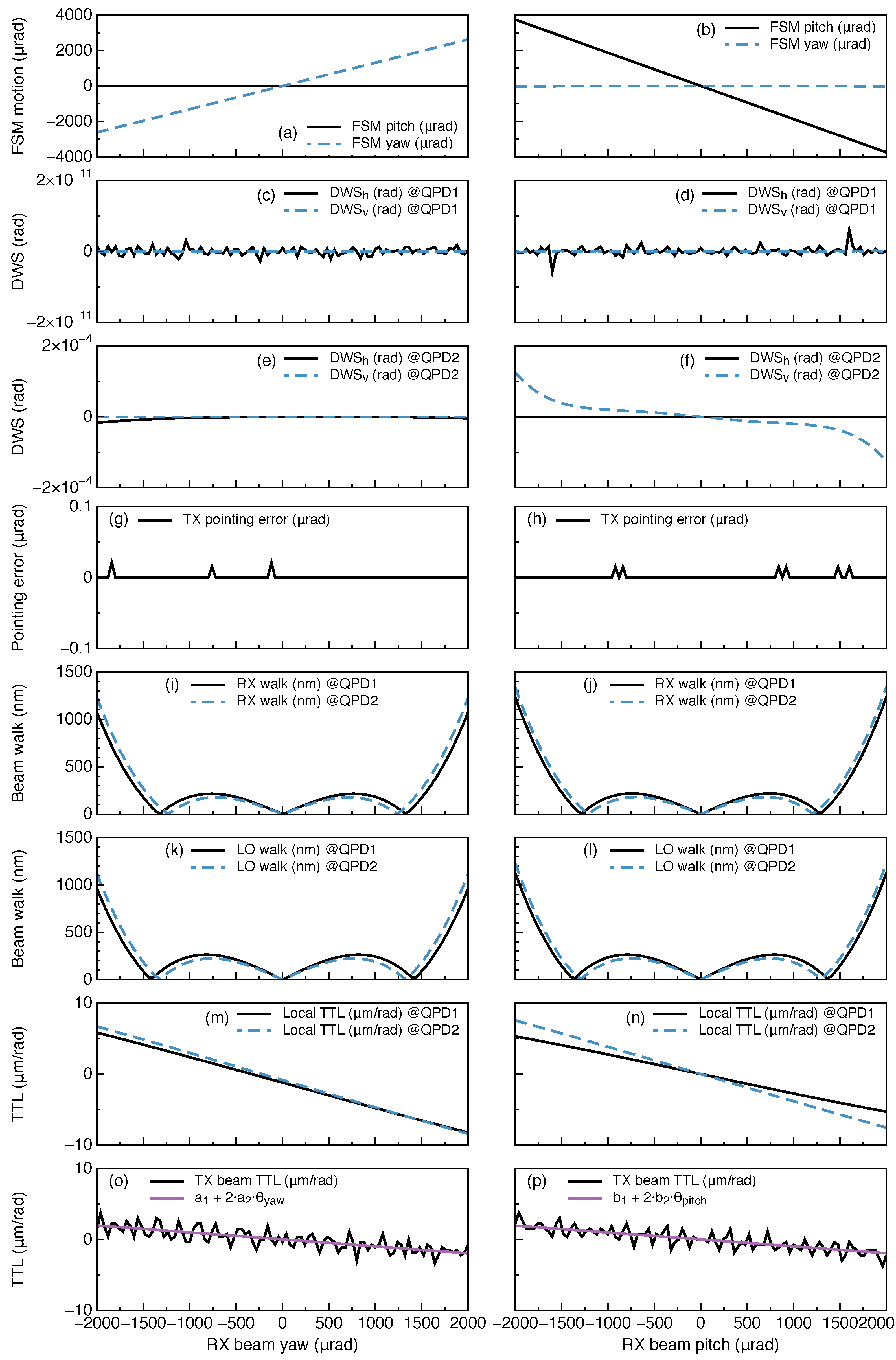 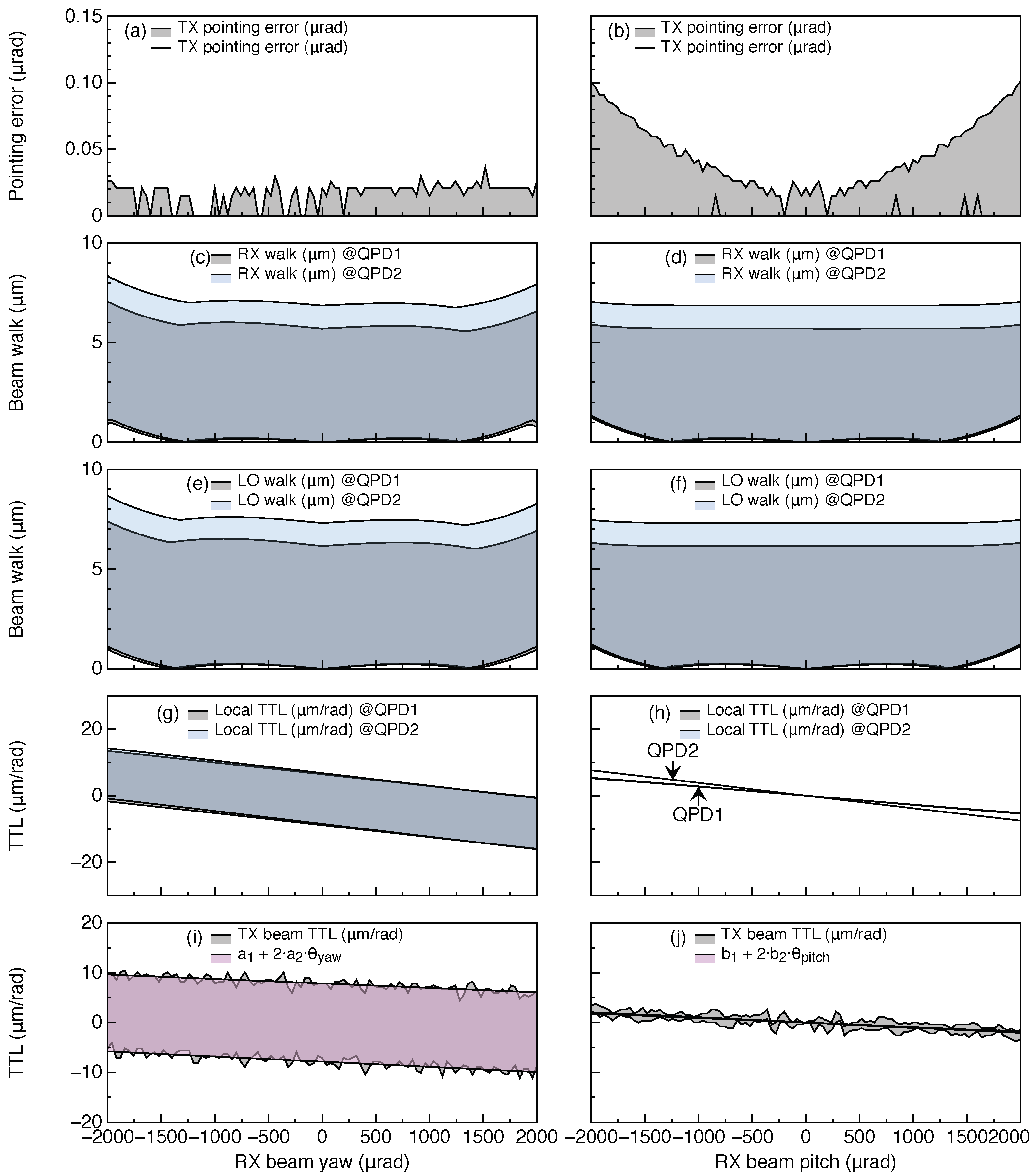