Human Activity Recognition Based on Residual Network and BiLSTM

As shown in Figure 1a,b, the accelerometer consists of a proof mass, resonant components, and fixed frame with central hollows. The resonant components include transmission beams, electrode pairs, insulator pairs, and graphene bands. The proof mass in the center is supported by four groups of transmission beams and suspended, which overcomes the friction between the fixed frame and the proof mass. Each group of transmission beams consists of an H beam and a crossbeam. One end of the H beam is connected with the center of the crossbeam, while the other end is connected with the proof mass, and the upper surfaces of these two beams are in the same horizontal plane to facilitate etching. The thickness of the crossbeam is usually larger than that of the H beam, so that the lateral displacement of the crossbeam introduced by the gravity of the proof mass and transmission beams is too small to be considered. The main structure of the accelerometer is formed by etching of a double-sided polished silicon wafer and then the main body and sealing covers are closely combined by the bonding process of the silicon wafer [18,19]. The crossbeam, H beam, and the central proof mass are located in a straight line, so that the whole accelerometer is symmetrical along two axes to avoid off-axis disturbance of acceleration. Four pairs of silicon dioxide layers or other insulating layers are covered at the central position on the crossbeam and the fixed frame. Then, four monolayer or few-layer graphene tapes are transferred to the corresponding insulating layers through the micro-nano transfer platform. The electrode pairs are formed at both ends of four graphene tapes by sputtering metal, and the graphene tapes are fixed at the same time. Finally, the accelerometer is sealed in a vacuum environment by bonding with the upper (not drawn) and lower sealing cover and vacuuming [20]. The resonant frequency can be actuated and detected by electrostatic [21] or optical [22] schemes. When using electrostatic excitation and detection schemes, the electrodes at both ends of graphene serve as source and drain, respectively, while the crossbeam is used as gate. All of them are connected with the external detection circuit by setting signal leads on the upper sealing cover. When using the optical excitation and detection schemes, the upper sealing cover is made of glass or other transparent materials.

2.2. Working Principle of the Accelerometer

Secondly, the size of the proof mass and transmission beams affects the measurement performance of acceleration by changing the corresponding stretching and shrinking length of the graphene under acceleration. Since the relative size of each structure was designed considering the independence of measurement and avoiding off-axis crosstalk, we only studied the synchronous magnification or reduction of these structures. We studied the measurement performance of the accelerometer in the range of 10 times reduction to 3 times magnification based on the original size, and the results are shown in Figure 8. It was found that the critical buckling acceleration and critical linear acceleration are greatly affected by the size. When the size is reduced by 10 times, the critical buckling acceleration is increased 100 times to nearly  g, which can meet the requirements of acceleration measurement in extreme environments, such as high-speed impact [37]. At this time, the sensitivity is on the order of hundreds Hz/g. However, the etching accuracy should reach 100 nm or even 10 nm, which requires a high level of fabrication technology and can be achieved by electron beam lithography or extreme ultra-violet lithography [38]. When the relative size is enlarged by 2 times and 3 times, the corresponding acceleration sensitivity increases by nearly 4 times and 9 times, respectively, which is approximately quadratic increasing. Therefore, changing the size of the force transfer structure is an effective method to improve the acceleration measurement performance.

Simulation, Y.X.; methodology, Y.X. and F.H.; conceptualization, S.Q.; supervision, F.H. and S.Q.; writing—original draft preparation, Y.X., F.H. and Y.Z.; writing—review and editing, Y.Z. and J.Z. All authors have read and agreed to the published version of the manuscript.

This work was financially supported by the National Natural Science Foundation of China, grant number 51705528.

The data are included in the main text. 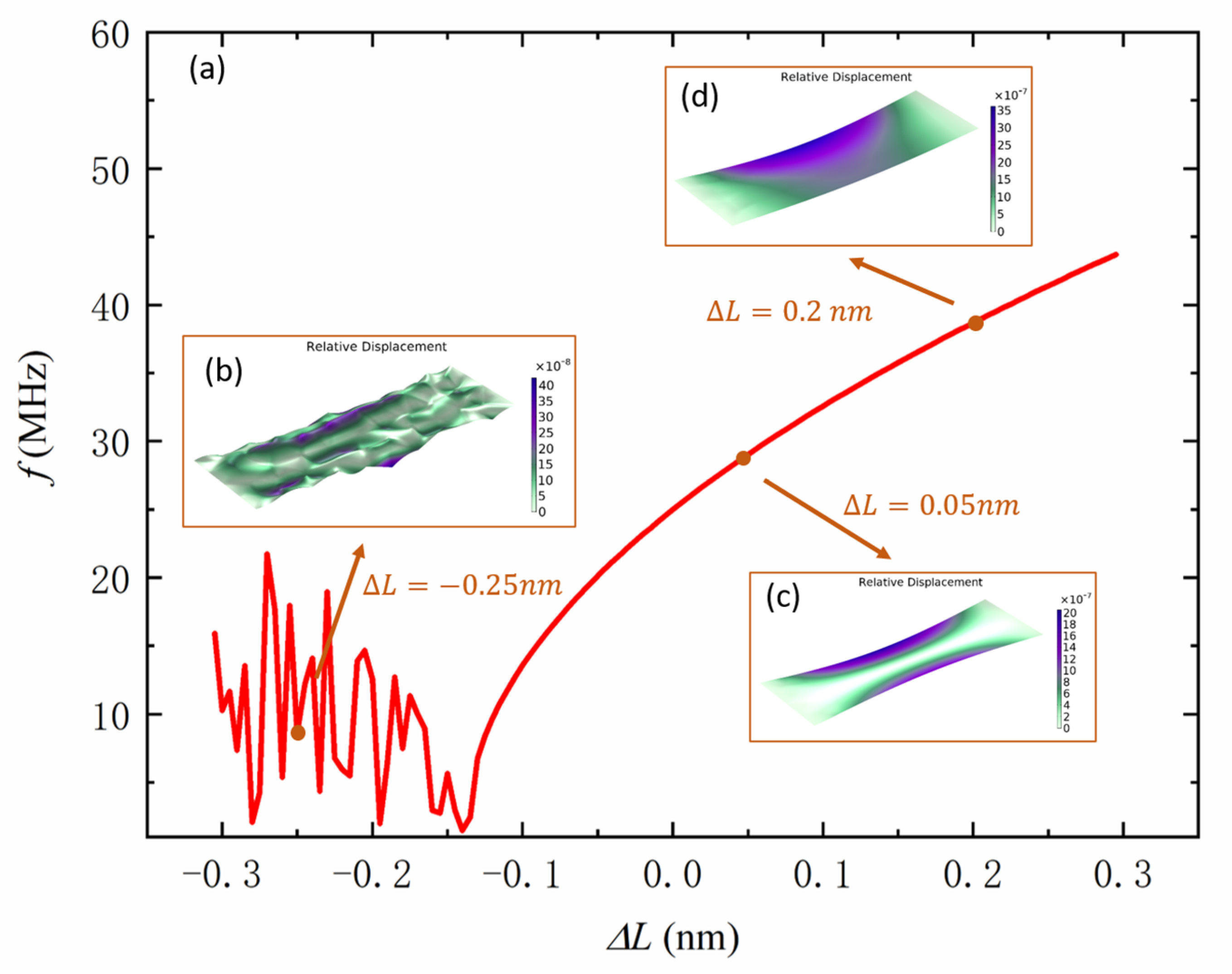 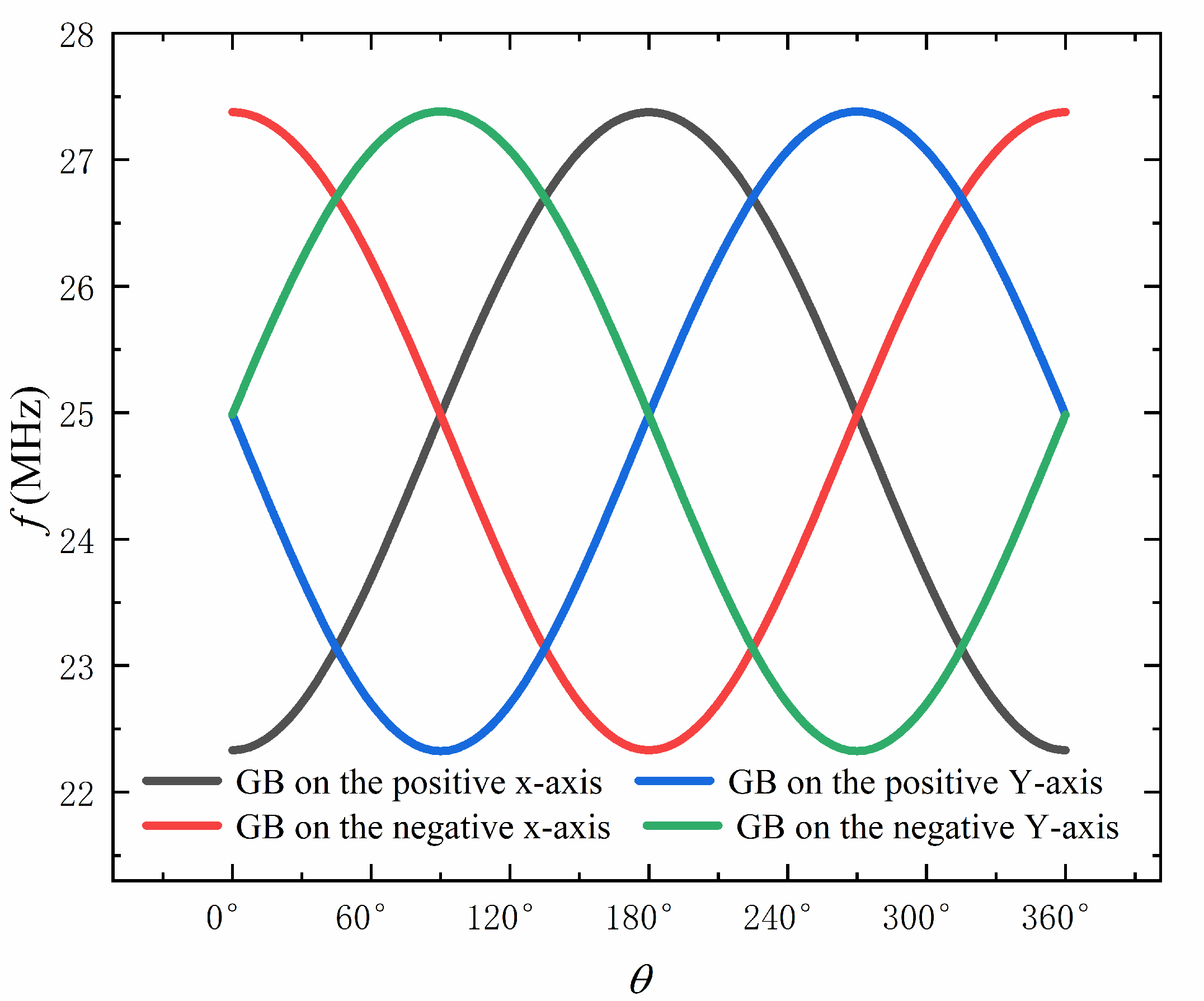