How to Quantitatively Balance a Total Knee? A Surgical Algorithm to Assure Balance and Control Alignment

This paper proposes a joint encryption and screen-cam robust watermarking scheme. This method combines the advantages of smartphone, encryption and watermarking technologies, thereby achieving watermark extraction with a smartphone, partial decryption and tracking leakage from sneak shots. We design a dual watermarking algorithm to achieve watermark detection from both encrypted and decrypted images. First, a watermark is embedded in the discrete Fourier transform (DFT) domain to enable leakage tracking. Then, a second watermark is generated based on QR (Quick response) code encoding and inverse DFT to achieve high watermark capacity and error correction ability, where the secret key for decryption is included in the watermark message. By hiding this message carrying the watermark for the encrypted image in the changes caused by embedding the first watermark, we can improve imperceptibility and will not affect the effectiveness of the proposed scheme. Finally, to enhance the robustness of watermark after encryption, a chaotic mapping-based segment encryption algorithm is proposed. In the process of watermark detection, to cope with perspective correction, a frame locating based algorithm is employed to achieve watermark synchronization from a recaptured picture of the encrypted image. Considering the severe quality degradation, we use a noise component and local statistic feature-based method to extract the message bits. The experimental results show that the proposed scheme is secure, and highly robust, to screen-cam the process for both before and after decryption. Additionally, after decryption, the proposed scheme also has high robustness against common image processing attacks. View Full-Text
Keywords: image encryption; chaotic mapping; screen-cam process; robust watermarking; discrete fourier transform; smartphone image encryption; chaotic mapping; screen-cam process; robust watermarking; discrete fourier transform; smartphone
►▼ Show Figures 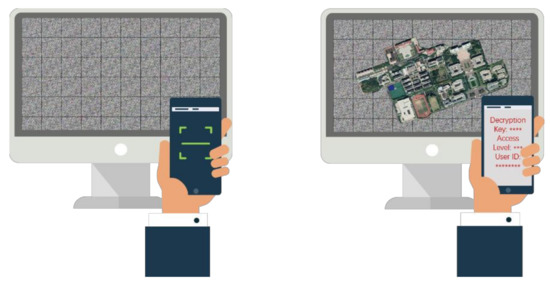