Computerized Assessment of Occlusion and Muscle Activity during Use of a Multilayer Clear Retainer: A Preliminary Study

Kyung A Kim
1 and

The aim of this preliminary study was to evaluate the short-term changes of occlusal contacts and muscle activity after orthodontic treatment during the use of a multi-layer clear retainer. Evaluation was done with the T-scan and BioEMG systems. A total of 18 subjects were included, who were evaluated at three time intervals—T0 at debonding, T1 at one month after retainer delivery, and T2 at four months after retainer delivery. The T-scan and electromyography (EMG) data were recorded simultaneously. The T-scan system recorded the occlusion time, disclusion time and force distribution. The EMG waves were quantified by calculating the asymmetry index and activity index. The time variables changed but not significantly. Occlusal force decreased in the anterior dentition and increased in the posterior dentition during T0–T2. There was no clear evidence of a relationship between unbalanced occlusal forces and muscle activity. In most subjects, the temporalis anterior muscle was more dominant than the masseter muscle. From this preliminary computerized study, there were no significant changes in the state of the occlusion or muscle activity during the short-term retention period.
Keywords: occlusion; orthodontic retainer; T-scan; electromyography; muscle activity occlusion; orthodontic retainer; T-scan; electromyography; muscle activity

After orthodontic treatment, the retention phase is intended to maintain the corrected occlusion and function. Without retention, one expects relapse, or unfavorable change from the final occlusion [1]. A favorable change after orthodontic treatment also occurs, called settling. Teeth naturally will erupt toward each other to find stable points of contact, improving intercuspation and masticatory function. With settling, the number of occlusal contacts increases [2]. Dental occlusion and occlusal forces have been suggested as one of the factors for stability since the development of contemporary orthodontics. Edward H. Angle, known as the father of modern orthodontics, stressed the importance of occlusal factors for the post-treatment stability [3].
After achieving the desired occlusion through orthodontic treatment, several types of removable retainers, such as the Hawley retainer, circumferential retainer, or a vacuum formed retainer (VFR) are prescribed and applied to patients. Comparative studies have been reported of the effects of various removable retainers on retention. Demir et al. compared the VFR with the Hawley retainer [4] and showed that the VFR was more effective to retain the mandibular anterior teeth during the retention period. Rowland et al. [5] suggested a similar result: that the VFRs had more effective influence on the retention of mandibular incisors. While the VFR showed good post-treatment retention, occlusal settling is interfered with. Moreover, the clear aligner, similar to the VFR, causes posterior open bite because of the posterior interocclusal plastic layers [6]. In addition to the prevention of occlusal settling, the VFR has poor wear resistance and durability of the occlusal surfaces, and the materials of this retainer have dimensional instability.
To overcome these limitations, a new type of clear retainer was developed called the Oral-treaper (OTP) (Figure 1) [7,8]. It is composed of multiple layers of polymers. The outer layer was made of modified polyethylene terephthalate glycol (PETG), which has good fatigue resistance and dimensional stability [9]. The middle layer is thermoplastic polyurethane (TPU) to increase the elasticity and relieve the forces delivered to the appliance [10,11]. The inner part is a reinforced resin core covering the incisal and lingual sides of the anterior teeth and the occlusal surfaces of the posterior teeth. The inner layer does not extend to the second molars to ensure settling of those teeth. Kim et al. [8] evaluated the settling pattern of patients during the use of the OTPs and showed an improvement in posterior occlusal settling. Most important in any study of settling patterns is the study methodology. Kim’s study measured the occlusion according to the depth of the occlusal contacts in digital models, which were based on study models from alginate impressions.
To evaluate the occlusion, measurements of occlusal contacts, force, and timing are required. Traditional occlusal analysis methods such as articulating paper, shim stock, waxes and silicone impressions are referred to as qualitative methods. They are incomplete due to their static nature, subjective interpretation, and lack of reliability and reproducibility [12]. A quantitative occlusal analysis can provide much better data. For example, the T-scan system (Tekscan Inc., South Boston, MA, USA) is a diagnostic device that records bite force dynamics, including relative occlusal force, location, and timing. When patients bite the pressure-measuring sensors, the occlusal changes are displayed directly on the computer screen and recorded. The force distribution ratios for each tooth are displayed on a 2D and 3D graph (Figure 2). Electromyography (EMG) is a diagnostic method using electrical potentials that is the most objective and reliable technique for evaluating muscle function and efficiency (Figure 3). With this device, the activation signal of muscles can be evaluated and recorded. It catches the electrical signals associated with the contraction. Kerstein [13] suggested the use of the T-scan and EMG systems in performing occlusal adjustment procedures. The simultaneous recording of both systems allows analyzing and correlating specific occlusal moments to specific muscle changes.
There have been a few studies that evaluate the relationship of occlusal contacts and masticatory muscles in post-orthodontic subjects, however they have not considered the retention protocol [14,15]. To the best of the authors’ knowledge, there are no studies investigating both occlusal dynamics and EMG muscle activity during post-orthodontic period follow-up. The aim of the present study was to evaluate the innocuous effects of the OTP retainer to occlusal changes in the retention period after orthodontic treatment, by evaluating the changes in the occlusion and masticatory muscle activity with a T-scan and EMG. The null hypothesis of this study was that the use of the OTP retainer does not affect the occlusion as expressed through a T-Scan and EMG during the retention period.

The inclusion criteria for the subjects were patients: (1) who had full fixed orthodontic treatment, including upper and lower braces (0.022-in Quicklear brackets with Tweemac prescription, Forestadent, Bernard Förster GmbH, Pforzheim, Germany); (2) who had fully erupted second molars; (3) who had no more than four missing teeth excluding third molars; and (4) who had no edentulous spaces within the arches. The exclusion criteria were patients: (1) who had missing teeth gaps or dental implants; (2) who had experienced jaw surgery; (3) who had anterior or posterior cross-bite or open-bite; (4) who had signs or symptoms of temporomandibular disorder (TMD); or (5) who had a CO (centric occlusion)–CR (centric relation) discrepancy. A total of 18 patients participated in this study. At debonding (T0), one month after retainer delivery (T1), and four months after retainer delivery (T2), the occlusion and muscle activity were inspected. The demographic data of participants is described in Table 1.
The sample size was calculated with the G*Power version 3.1.9.7 software (University of Düsseldorf, Düsseldorf, Germany) [16,17]. A priori power analysis suggested a minimum sample size of 16 subjects in F tests with three time measurements at an α = 0.05, power of 0.8, and calculated effect size of 0.33 under partial η2 = 0.1.

At the completion of orthodontic treatment, lingual retainers were bonded on maxillary and mandibular anterior teeth. Two weeks later, they received an Oral-Treaper (OTP) retainer for the maxillary dentition and a tongue elevator for the mandibular dentition (Figure 4). As described above, the OTP is a clear-overlay type retainer which is composed of three layers (Figure 1) [7,8]. The outer layer is polyethylene terephthalate glycol (PETG), the middle layer is thermoplastic polyurethane (TPU), and an inner layer is a reinforced resin core. The tongue elevator is an appliance that elevates the patient’s tongue to a correct tongue posture [18]. It is composed of a lower anterior labial bow, occlusal rests on all molars, and acrylic resin ledges below the tongue. Patients were instructed to wear the retainers during sleeping.

At each time point, subjects underwent occlusal and muscle activity analysis with the T-scan Novus ver.9 system and BioEMG III system (BioResearch Inc., Milwaukee, WI, USA) in the multifactor malocclusion service (MMS) clinic of Kyung Hee University Dental Healthcare Center (Figure 2 and Figure 3). All recordings were made with the patient in an upright position in the unit chair. After the skin was cleaned with 70% isopropyl rubbing alcohol, EMG electrodes were placed onto the TA and MM bilaterally. The T-scan sensor was also placed in the subject’s mouth. The T-scan and EMG recordings were simultaneously recorded (Figure 5).
The T-scan recorded the occlusion time (OT) and force distribution in a maximal intercuspal position (MICP) and the disclusion time (DT) in protrusive and left/right excursive movements. OT is the time taken from initial tooth contact to MICP, and DT is the time from when anterior or lateral guidance is formed to the point when molar contact is lost. The EMG waves were quantified by calculating the asymmetry index and activity index for each subject at maximum occlusal force of MICP position. All mandibular movements were measured a total of 3 times each and the average of 3 values was calculated.

The original asymmetry index describes the asymmetry between the right and left sides of paired muscles [19]. We modified the asymmetry index so that the positive value of the asymmetry index indicated which side of the mouth had a higher occlusal force and a higher muscle activity value. The negative value of asymmetry index indicates the side of lower occlusal force and muscle activity.
Activity index describes the relative contribution of the MM and TA [19].
The activity index may vary between +100% and −100%, where a negative number indicates a dominant TA activity and a positive number indicates a dominant MM activity.
Repeated measures analysis of variance (ANOVA) was performed for the comparison of serial periods. p < 0.05 was considered statistically significant. All data were analyzed using the Statistical Package for Social Sciences ver. 22.0 (SPSS, Chicago, IL, USA).

No significant changes in OT or DT were noted during T0–T2 time intervals (Table 2). In addition, no significant anteroposterior occlusal force changes were noted, but there was a decrease in anterior dentition force and a concomitant increase in posterior dentition force (Figure 6). Through T0 to T2, the differences between the larger and smaller sides were 13%–20%, so there was some unbalance between left and right side; however, there were no significant changes from T0 to T2.

The changes between the voltage emitted by the MM and TA during time intervals were insignificant (Table 3). The mean value of EMG potentials of TA shows a higher value than MM. There were no marked predominance sides in the asymmetry index of both muscles, and the sign of the asymmetry index changed at each period. The activity index also showed negative values which mean a dominance of TA.

Based on the findings from the preliminary study, the null hypothesis was accepted because the occlusion time and disclusion time did not significantly change during four-month orthodontic retention periods, and varied in normal ranges. Occlusal forces decreased in the anterior dentition and concomitantly increased in the posterior dentition during the four months after retainer delivery. There was no clear evidence of a relationship between unbalanced occlusal forces and muscle activity. In most subjects, the temporalis anterior muscle was more dominant than the masseter muscle.

The study was conducted according to the guidelines of the Declaration of Helsinki, and ap-proved by the Institutional Review Board of Kyung Hee University Dental Hospital (protocol code KHD IRB 1612-7 and date of approval October, 2017).

This research article was partly from one the authors (K.Y.K.) Ph.D. Thesis. The authors want to give special thanks to Robert B. Kerstein, and Ki-Ho Park, the Department of Orthodontics, Graduate School, Kyung Hee University, Seoul, Korea for manuscript editing. 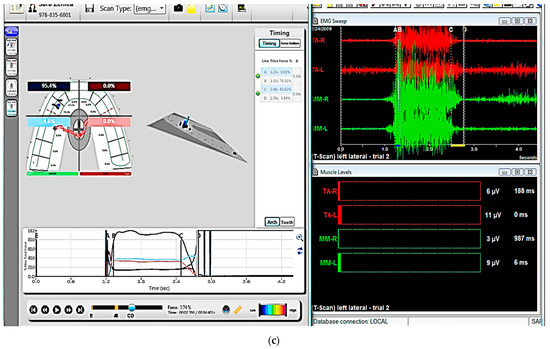 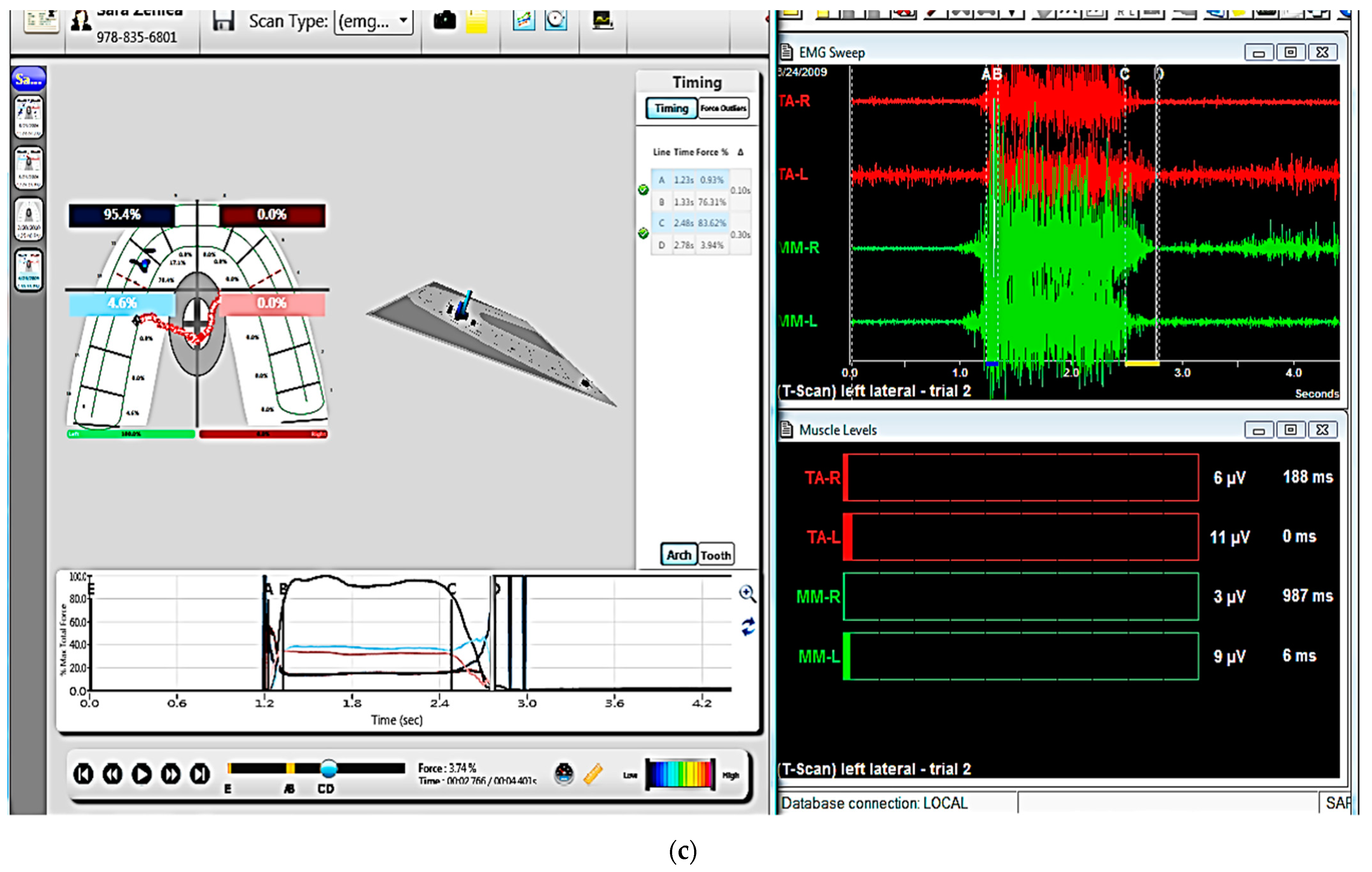 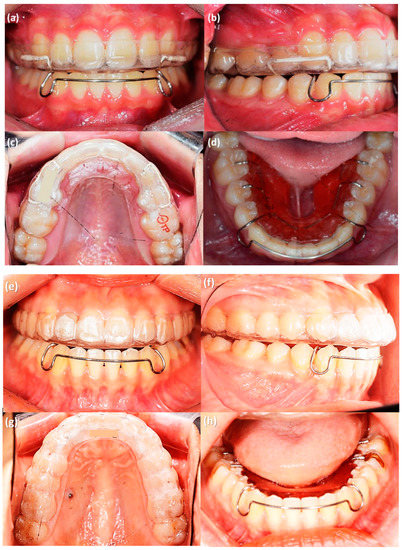 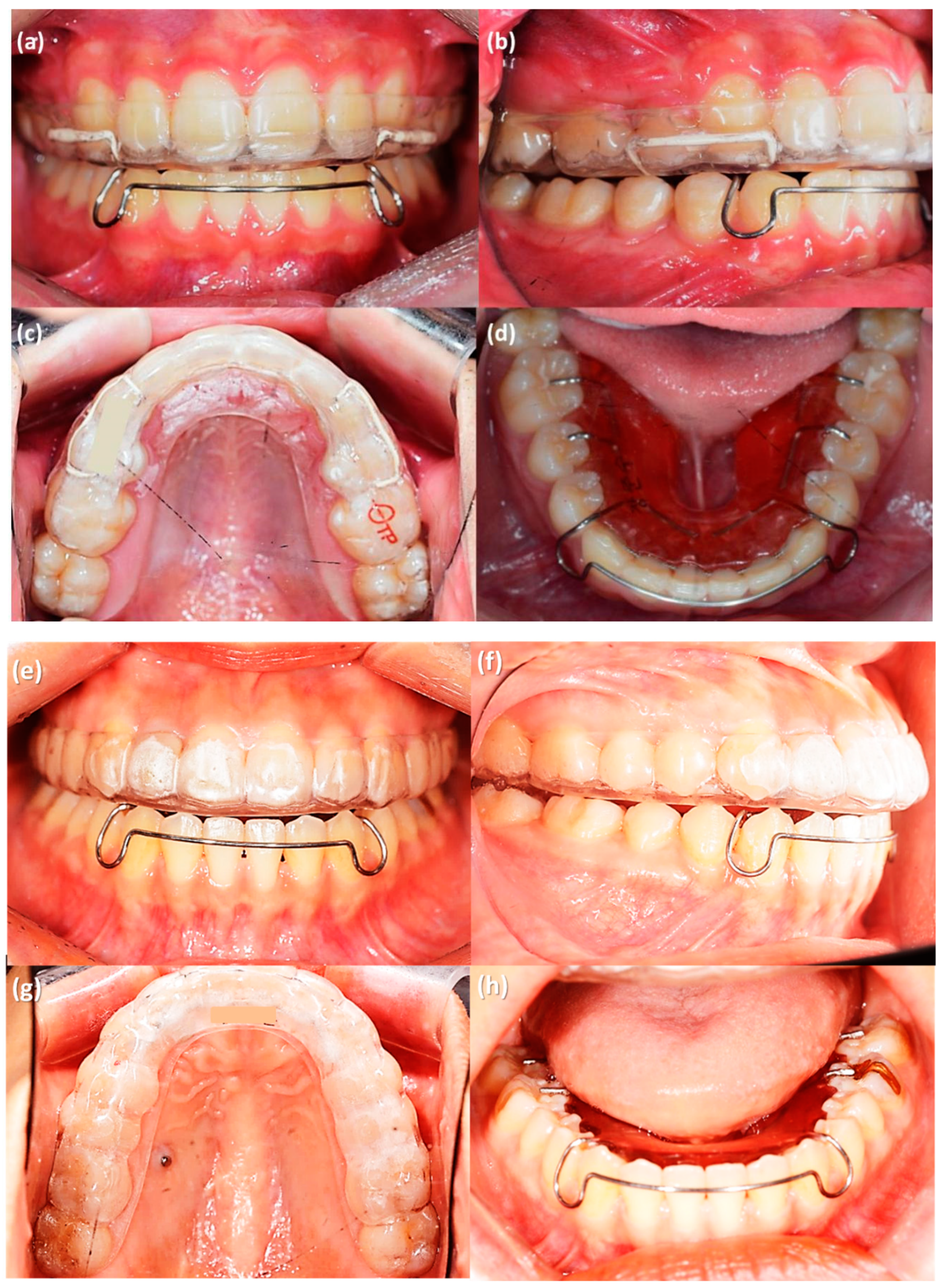 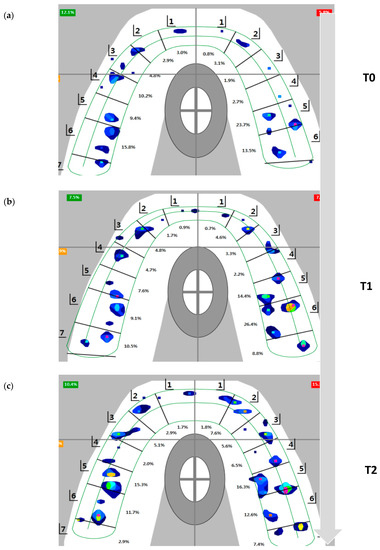 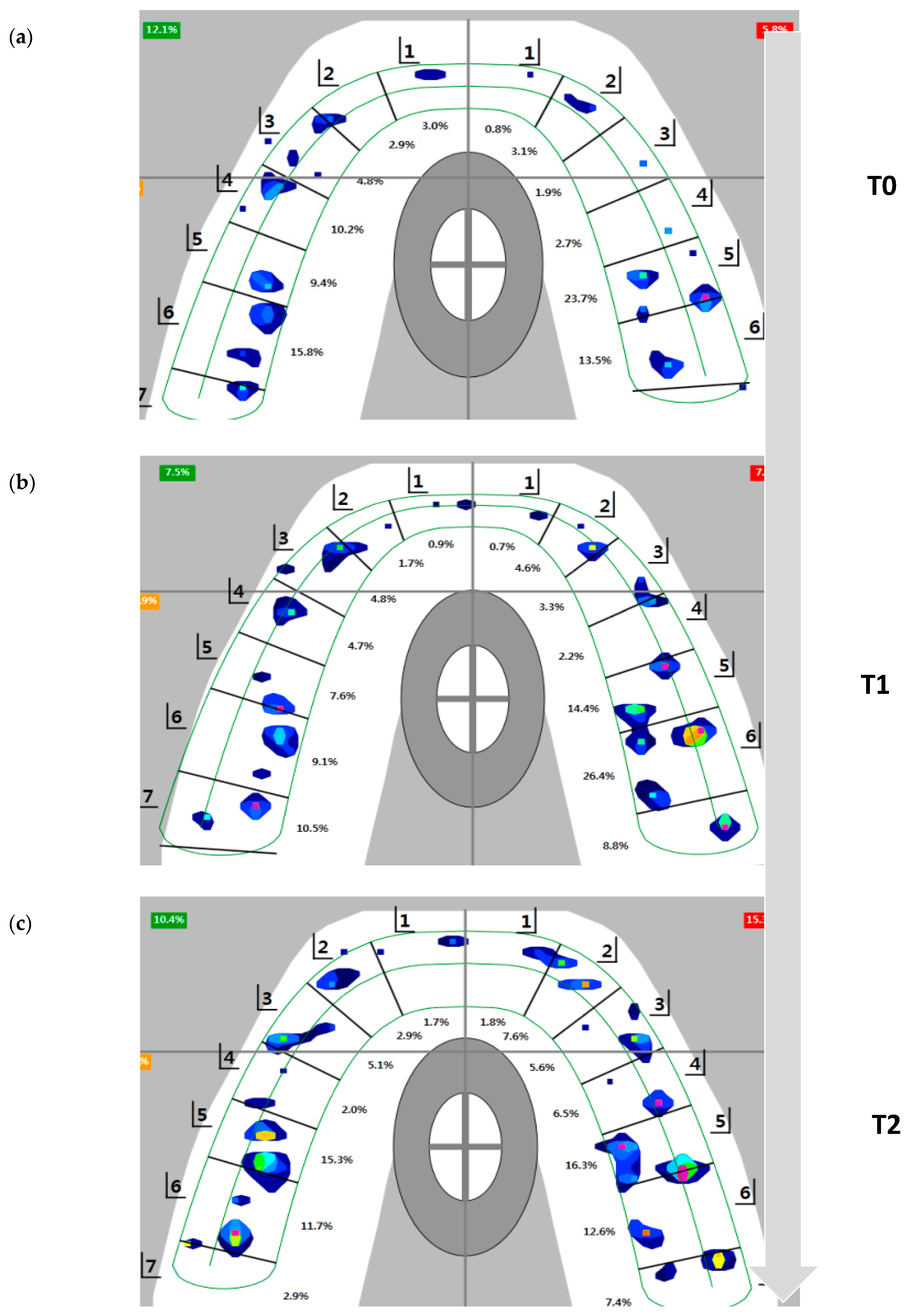