Bandwidth Detection of Graph Signals with a Small Sample Size

Unlike the fixed power grid cooperative networks, which are mainly based on the reception reliability parameter while choosing the best relay, the wireless-powered cooperative communication network (WPCCN) and in addition to the reception reliability the transmission requirement consideration is important for relay selection schemes. Hence, enabling efficient transmission techniques that address high attenuation of radio frequency (RF) signals according to the distance without increasing the total transmission power is an open issue worth studying. In this relation, a multiantennas power beacon (PB) that assists wireless-powered cooperative communication network (PB-WPCCN) is studied in this paper. The communication between source and destination is achieved with the aid of multiple relays, where both the source and the multiple relays need to harvest energy from the PB in the first place to enable their transmission functionalities. A novel relay selection scheme is proposed, named as two-round relay selection (2-RRS), where a group of relays that successfully decode the source information is selected in the first round selection. In the second round, the optimal relay is selected to forward the recorded information to the destination. The proposed 2-RRS scheme is compared with two existing relay selection schemes, i.e., partial relay selection (PRS) and opportunistic relay selection (ORS). The analytical closed-form expressions of outage probability and average system throughput are derived and validated by numerical simulation. The comparison results between different relay selection schemes show: (I) The superiority of the proposed 2-RRS scheme as it achieves around 17% better throughput compared to the conventional ORS scheme and 40% better than the PRS scheme, particularly when PB transmit power is 10 dB; (II) The proposed 2-RRS scheme guarantees the lowest outage probability, especially when the PB is equipped with multiantennas and performs beamforming technique; (III) The optimal localisation of the PB between the source and N relays depends on the adopted relay selection scheme; (IV) The exhaustive search of the maximum system throughput value shows that the proposed 2-RRS scheme required shorter energy harvesting time compared to other schemes. The increase in energy harvesting time and number of relays do not necessarily reflect positively on the system throughput performance; hence tradeoffs should be taken into consideration. View Full-Text
Keywords: energy harvesting; power-beacon; cooperative-networks; relay selection; multi-antennas; beamforming energy harvesting; power-beacon; cooperative-networks; relay selection; multi-antennas; beamforming
►▼ Show Figures 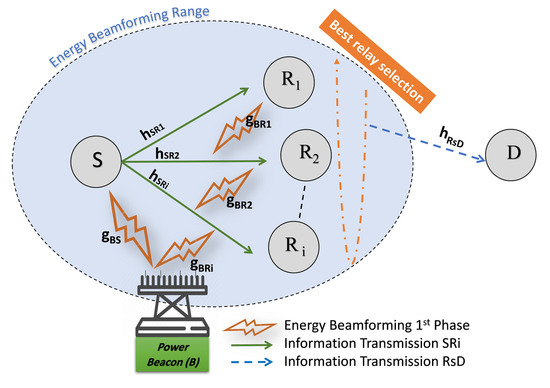