Effective and Efficient Pretreatment of Polyimide Substrates by Capacitively Coupled Plasma for Coating the Composites of Tetracycline-Imprinted Polymers and Quantum Dots: Comparison with Chemical Pretreatment
Next Article in Special Issue

A Proposed Method to Assess the Mechanical Properties of Treadmill Surfaces

The aim of this study was to define a reliable and sensitive test method for assessing Shock Absorption (SA), Vertical Deformation (VD), and Energy Restitution (ER) in treadmill surfaces. A total of 42 treadmills belonging to four different models were included in the study: (a) Technogym Jog700 Excite (n = 10), (b) Technogym Artis Run (n = 12), (c) LifeFitness Integrity Series 97T (n = 11), and (d) LifeFitness Integrity Series DX (n = 9). An advanced artificial athlete (AAA) device was used to assess SA, VD, and ER at three different locations along the longitudinal axis of each treadmill and in the support area of the athletes’ feet. For each location, our results show that the error assumed when performing one impact with the AAA instead of three (SA ≤ |0.1|%, VD ≤ |0.0| mm, and ER ≤ |0.2|%) is lower than the smallest changes that can be detected by the measuring device (SA = 0.4%, VD = 0.2 mm, and ER = 0.9%). Also, our results show the ability of the test method to detect meaningful differences between locations once the one-impact criterium is adopted, since absolute minimum differences between zones (SA: |0.6|%, VD: |0.3| mm, and ER: |1.2|%) were above the uncertainty of the measuring device. Therefore, performing a single impact with the AAA in each of the three locations described in this study can be considered a representative and reliable method for assessing SA, VD, and ER in treadmill surfaces. View Full-Text
Keywords: sport surfaces; running; biomechanics; shock absorption; energy restitution sport surfaces; running; biomechanics; shock absorption; energy restitution
►▼ Show Figures 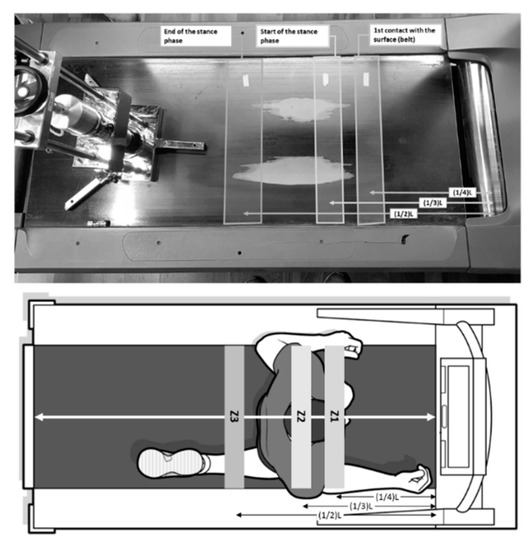