Dielectric coating of optical fibers has been widely applied to various sensing applications and has been shown to improve the performance of fibers. Optical fibers coated with non-uniform metal coatings of gold, silver, copper or palladium exhibit better sensitivity to various forms of perturbations [1]. In particular, palladium (Pd) coated optical fiber sensors demonstrate an ultrahigh sensitivity for detecting hydrogen [2]. Polyimide coated optical fibers can effectively respond to humidity changes [3]. Zinc oxide (ZnO) coated long-period fiber gratings (LPFG) have improved refractive index (RI) sensing properties [4]. In certain cases, the accuracy of the coating thickness is very important for the qualitative study of the physical properties. Various methods for the accurate measurement of the coating thickness have been widely studied. A method has been proposed for measuring thin film thickness using total internal reflection fluorescence microscopy with the use of evanescent wave illumination, which can overcome the drawbacks of the optical methods that are insufficient for measuring the thickness of a thin film with curvature [5]. A scanning angle (SA) Raman spectroscopy method enables the non-destructive measurement of the polymer thickness [6,7]. High frequency ultrasonic transducers can be used to characterize the variation of thickness in polymer thin films (<1 µm) [8]. Reflection high-energy electron diffraction, piezoelectricity, interferometry, and gravimetric methods can be used to measure the thickness of films in the range of 1 nm‒1 µm during film deposition or on a finished product [9]. Scanning electron microscopy (SEM), which has a good resolution and simple operation, is most commonly used to detect the thickness of a coating material. However, SEM is expensive, and measurement is usually limited by the sample conductivity (for dielectrics, a thin layer metal coating is required) and requires high vacuum conditions [10]. Fourier transform-based structured-illumination microscopy (FTSIM) and modulation-based structured-illumination microscopy (MSIM) can also detect the surface topography and thickness distribution [11,12]. Fourier-domain optical coherence tomography (FDOCT) is an alternative method [13], however, this method is again costly and relatively complicated, and can only achieve micrometer-scale detection, which has a relatively low resolution.
Hollow-core fiber (HCF) has attracted a lot of research interest in the field of optical fiber sensors. For instance, a simple structure is demonstrated for the refractive index sensing by splicing a segment of capillary with two segments of single mode fibers (SMFs) [14]. An air-gap microcavity is incorporated in the HCF to form a Fabry–Pérot interferometer (FPI) for sensing applications [15,16,17]. In FPI-based sensors, the size of the microcavity needs to be very accurately controlled to the order of microns, as subtle variations in the length of the cavity will result in significant changes in the actual spectrum. The resolution and detection limits for whispering gallery mode-based refractometric sensor devices can be quickly estimated by a simple numerical relationship [18]. Previous reports show that HCF-based interferometer structures have been used for temperature [19], vibration [20], and humidity sensing [21], demonstrating its wide application prospects.
In this paper, we propose and investigate a new way to use a single HCF-based multiple beam interferometer for thin-layer thickness measurement, in which a short section of HCF is fusion spliced between two SMFs. The proposed method can achieve an ultrahigh resolution with sub-nanometer thickness detection. The demonstrated sensor has the advantages of being low cost, having good repeatability, and an ease of fabrication.

A schematic diagram of the proposed HCF sensor for thickness measurement is shown in Figure 1. The sensor structure is an SMF–HCF–SMF fiber structure, and the thin layer that is to be measured is coated on the HCF section. When light is transmitted from the input SMF to the HCF, because the diameter of the SMF (around 8.2 µm) is smaller than the air core (around 30 µm) of the HCF and the RI of the silica cladding is larger than that of the air core, no guided mode is transmitted within the HCF. As illustrated in Figure 1, an obvious anti-resonant reflecting guidance mechanism is triggered in the HCFs [19,22,23], which relies on the principle of thin-film interference and is created by forming a Fabry–Pérot in the transverse direction, with cladding layers that function as Fabry–Pérot etalons [24,25]. The light that reaches the silica cladding of the HCF propagates within the cladding. The coated thin-layer material is equivalent to thickening the outer diameter of the HCF. The incident light from the SMF is reflected at both the interface between the inner air/cladding and the outer air/coated layer, resulting in multiple beam interferences within the HCF.
Provided that the input light (S) has an amplitude (A), the silica cladding thickness is and the RI is , the coating thickness is , and the RI is . When the light is injected into the cladding, there is an incident angle of and a refractive angle of , and when it is injected into the coating, there is an incident angle of and a refractive angle of . Then, the phase difference between the two adjacent reflected light rays inside the air core of the HCF (, , , , etc.) is . The complex amplitude of the reflected light can be expressed as and [18]. , , and are the coefficients of reflection at the interfaces between the inner air/cladding, cladding/inner air, and coating/outer air, respectively, which can be calculated by the Fresnel equations, as follows: where is the refractive angle between the coating/outer air, and , , , and are the coefficients of refraction at the interface between the inner air/cladding, cladding/coating, coating/cladding, and cladding/inner air, respectively. Their relationship is as follows:
If there are reflected light rays, where L is the length of the coated HCF fiber, then the amplitude of reflected light after simplification can be expressed as follows: where the intensity of light reflected is thus .
The coating thickness, , is inversely proportional to . Therefore, as the coating thickness increases, the anti-resonant reflecting guidance wavelength must be redshifted to keep the phase difference, , unchanged. Figure 2a shows the simulated spectral response for the different coating thicknesses of the structure. In the simulation, the diameters of the air core and silica cladding of the HCF are 30 and 126 μm, respectively; the RIs of the air core and cladding are 1.0 and 1.451, respectively; and the RI of the graphene oxide (GO) coating film is 1.9 [26]. As the coating thickness increases, the spectral response shifts to a longer wavelength linearly, with a change rate of 0.05 nm, as shown in Figure 2b. Assuming the optical spectrum analyzer (OSA) has a resolution of 0.01 nm, the theoretical limit of measurement for the GO coating layer is 0.2 nm. The simulated results indicate that the SMF–HCF–SMF fiber structure can measure thickness with ultrahigh resolution in the order of sub-nanometers.

In conclusion, an ultrahigh fiber sensor for measuring the thickness of nanometercoatings was proposed, based on an SMF–HCF–SMF structure. Both theoretical and experimental studies have demonstrated that the novel technique can measure very thin GO layer coatings, down to a sub-nanometer, with good repeatability. The temperature sensitivity of the sensor structure has also been studied experimentally, and the results show that the coating of GO has very limited influence on the sensitivity of the fiber structure. The proposed technique has other potential applications, such as measuring the viscosity and concentration of a material. For instance, it can measure the viscosity of a liquid by coating a thin layer of the material on the HCF surface, particularly for very low viscosity polymer materials. The sensor has the unique advantages of having ultrahigh resolution, simple fabrication, and good repeatability, as well as being low cost.
It is noted that although the analysis above is based on a dielectric material, the sensor can also be used for metal measurement, provided calibration has been taken for each type of metal. However, as shown in Figure 3 in the literature [27], because of the high transmission loss of metals, the extinction ratio reduces significantly as the metal coating thickness increases, resulting in a very narrow thickness measurement range (around 10 nm). 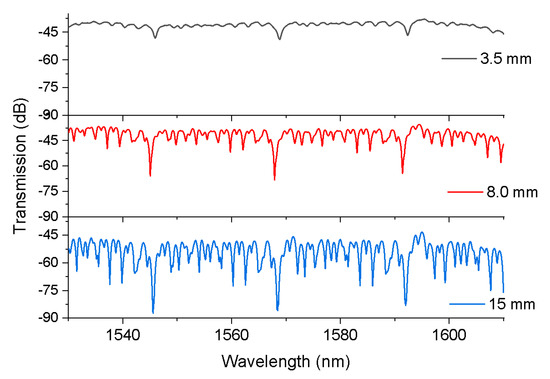 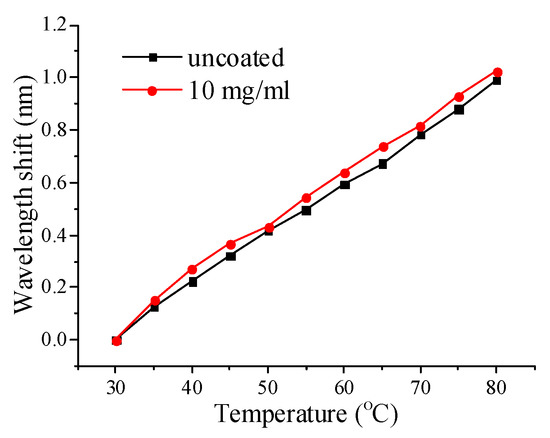 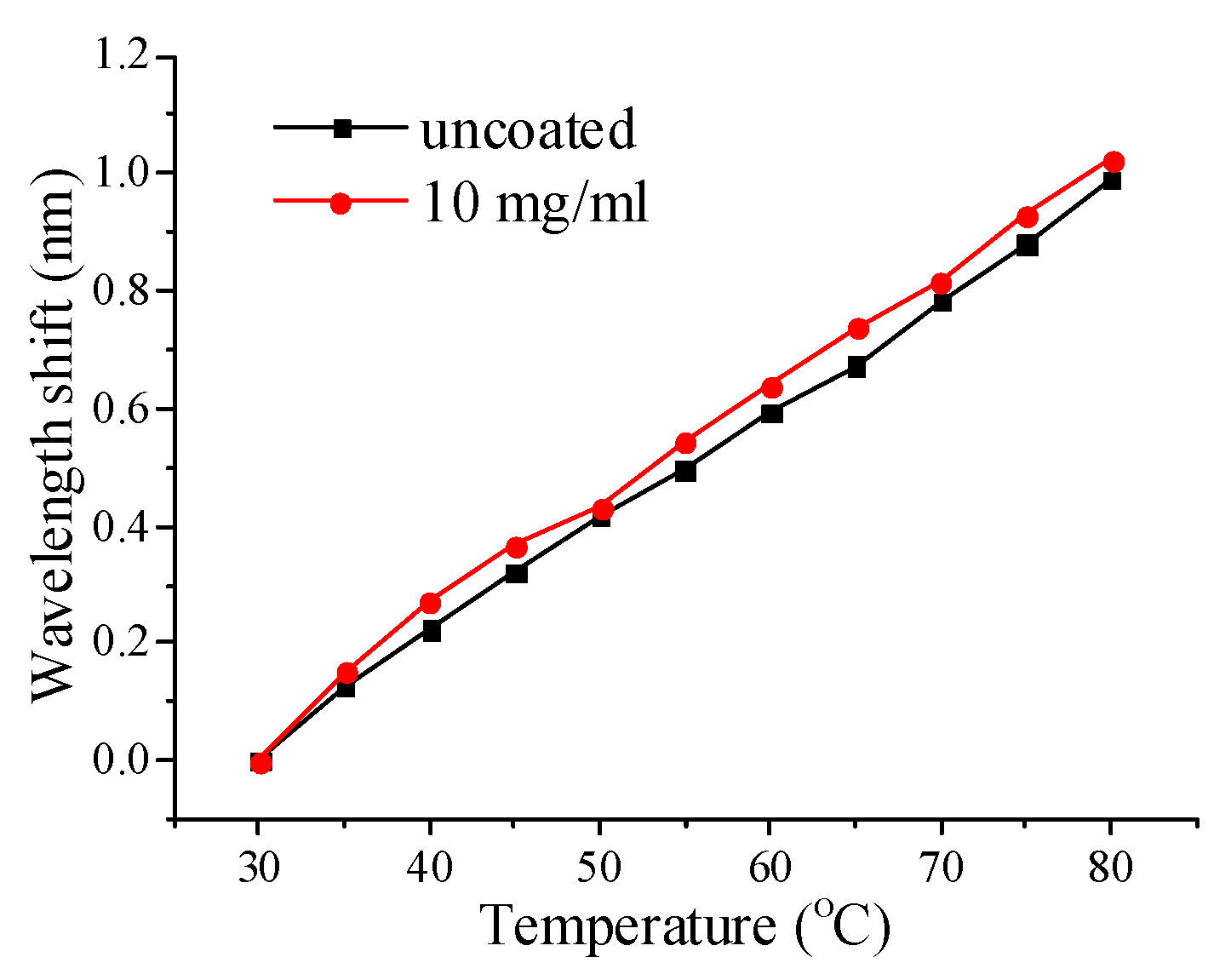