Electrochemical Biosensors Based on S-Layer Proteins
Previous Article in Journal

A method is presented for detecting changes in the axial peak tibial acceleration while adapting to self-discovered lower-impact running. Ten runners with high peak tibial acceleration were equipped with a wearable auditory biofeedback system. They ran on an athletic track without and with real-time auditory biofeedback at the instructed speed of 3.2 m·s−1. Because inter-subject variation may underline the importance of individualized retraining, a change-point analysis was used for each subject. The tuned change-point application detected major and subtle changes in the time series. No changes were found in the no-biofeedback condition. In the biofeedback condition, a first change in the axial peak tibial acceleration occurred on average after 309 running gait cycles (3′40″). The major change was a mean reduction of 2.45 g which occurred after 699 running gait cycles (8′04″) in this group. The time needed to achieve the major reduction varied considerably between subjects. Because of the individualized approach to gait retraining and its relatively quick response due to a strong sensorimotor coupling, we want to highlight the potential of a stand-alone biofeedback system that provides real-time, continuous, and auditory feedback in response to the axial peak tibial acceleration for lower-impact running. View Full-Text
Keywords: biomechanics; augmented feedback; motor learning; gait adaptation; music biomechanics; augmented feedback; motor learning; gait adaptation; music
►▼ Show Figures 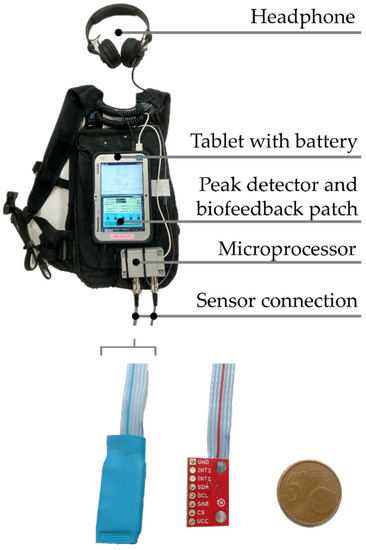