The Wiegand effect was initially observed in magnetic wires of NiFe alloys. In addition, the Wiegand effect was also observed in the magnetic bistable FeSiB amorphous wires. But vicalloy, with a typical composition of Fe0.4Co0.5V0.1, has been known as the optimum material that yields this effect [3]. The diameter of the wire is typically 0.25 mm. Torsion stress, annealing, and cold-treatment were applied to the wire in the fabrication. The strength, twisting and anti-twisting abilities of the Wiegand wire are improved by performing a cold-treatment process. The wire exhibited different magnetic properties near the surface regions and around their center after twisting. This results in a "soft layer" with a soft magnetic appearance and low coercivity of approximately μ0H = 1 mT. This also resulted in a hard center, known as the "hard core", with a larger coercive force of approximately from μ0H = 1 to 8 mT [7,8,9,10,11,12]. The magnetic properties of the twisted FeCoV wires depend on the conditions of the annealing and torsion stress, which have been previously reported [6]. The volume ratio of the soft layer exhibiting the fast magnetization reversal is calculated to be 23% at a maximum, and the thickness of the soft layer is approximately 0.03 mm, which has been previously reported in detail [3]. The Wiegand sensor consists of two parts: the Wiegand wire, which is the sensitive element of the sensor, and the pickup coil around the Wiegand wire. The structure of the Wiegand wire and the sensor are shown in Figure 1.
When no external magnetic field is applied, the hard and soft layers are parallel [13], as shown in Figure 2a. When opposite magnetic fields with the appropriate strengths are applied to the Wiegand wire, the soft layer with the low coercivity will first flip [14,15,16], as demonstrated in Figure 2b. This magnetization reversal of the soft layer is accompanied by a large Barkhausen jump, which is also known as the Wiegand effect [9,10,11]. A magnetization reversal of the soft layer from the antiparallel to the parallel process, against the hard core was observed by applying an asymmetric field, which has been previously reported [3]. As the reverse magnetic field continues to increase, the hard layer with the higher coercivity also reverses subsequently. When the polarity of the external magnetic field changes again, the soft layer becomes reversed, followed by the hard layer in a cyclic process [17,18]. The major loop of the FeCoV wire that is 0.25 mm in diameter and 25 mm in length was measured before the measured minor loop. The saturation magnetization of the sample was Ms = 1.78 T. The major loop and minor loop were measured using a vibration sample magnetometer. Figure 2c illustrates the magnetization curve (minor loop) of the whole wire and a schematic of the magnetization process of the Wiegand wire (FeCoV wire) used in this study. It can be seen from Figure 2c that the magnetization reversal is gradual in the hysteresis loop (magnetization curve) measured with an applied static magnetic field up to μ0H = 6 mT. A steep change in the magnetization is observed at around μ0H = 1 mT, where the magnetization of the soft later is reversed. The magnetization of the hard core is gradually reversed from 1 to 6 mT. The hard core is magnetized completely until the wire reaches the saturation state, which occurs when the applied alternating magnetic field μ0H is greater than 15 mT.

2.2. Wiegand Pulse and Its Energy

A Wiegand wire of length 11 mm and a diameter of 0.25 mm, supplied from SWFE, Co. Ltd., Meishan, China, was used in this work. When the Wiegand wire is placed in an alternating magnetic field, the pickup coil repeatedly outputs the alternating Wiegand pulses. Typically, the rotation of a pair of magnets or a single magnet is used to apply an alternating magnetic field to the wire. In this study, a pair of magnets was used. All of the waveforms of the pulse voltage were measured as an open circuit voltage across the pickup coil of the Wiegand sensor.

3.2. Change the Position of the Pickup Coil

3.3. Adjust the Angle of the Sensor in the Magnetic Field

3.4. Simulate the Distribution of the Magnetic Field

4.1. Relationship between Magnetic Flux and Energy

4.2. Relationship between the Position of the Pickup Coil and Energy

4.3. Relationship between the Angle and Energy

This research was funded by the JSPS KAKENHI, grant number 19K21965. 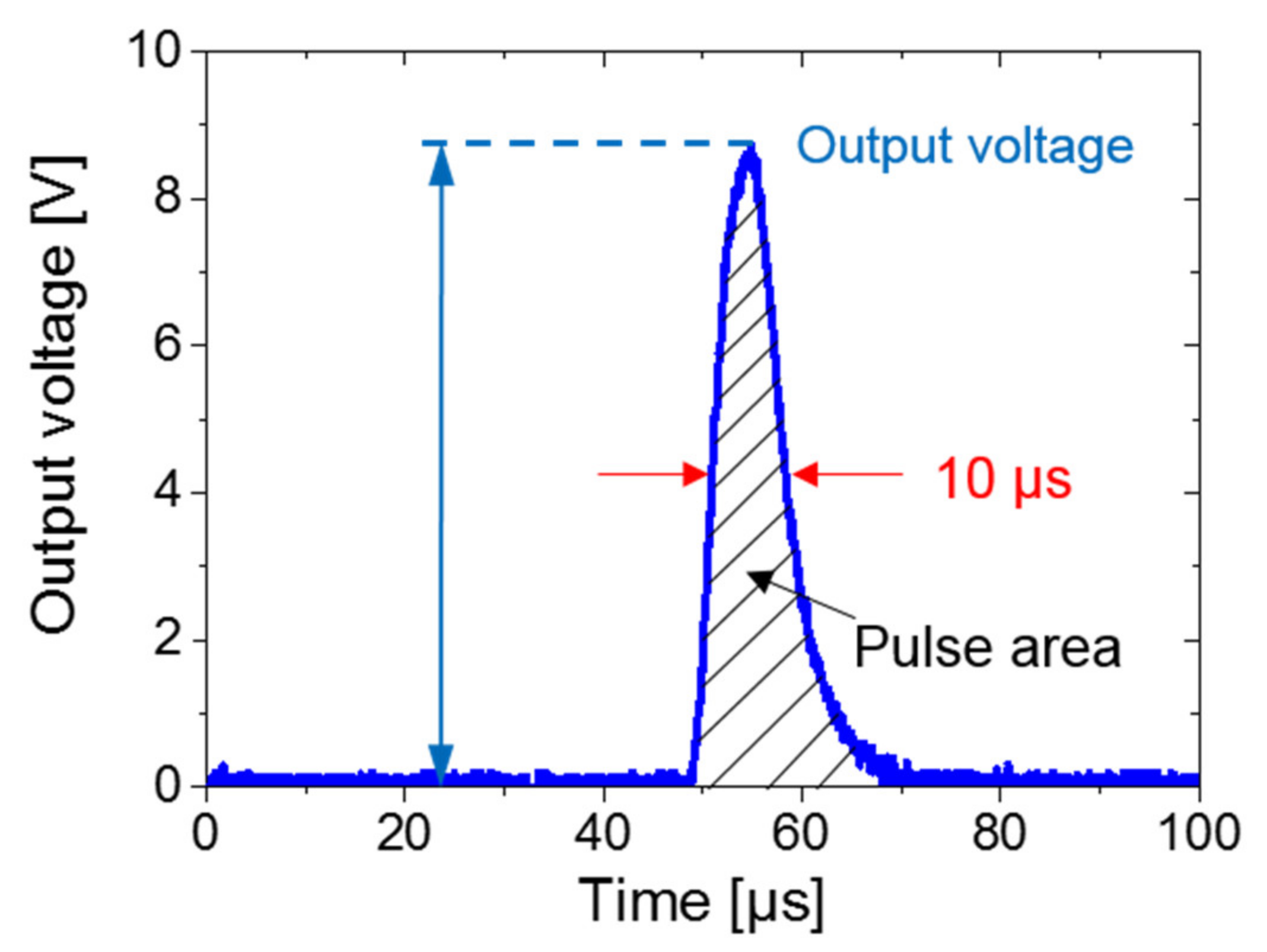 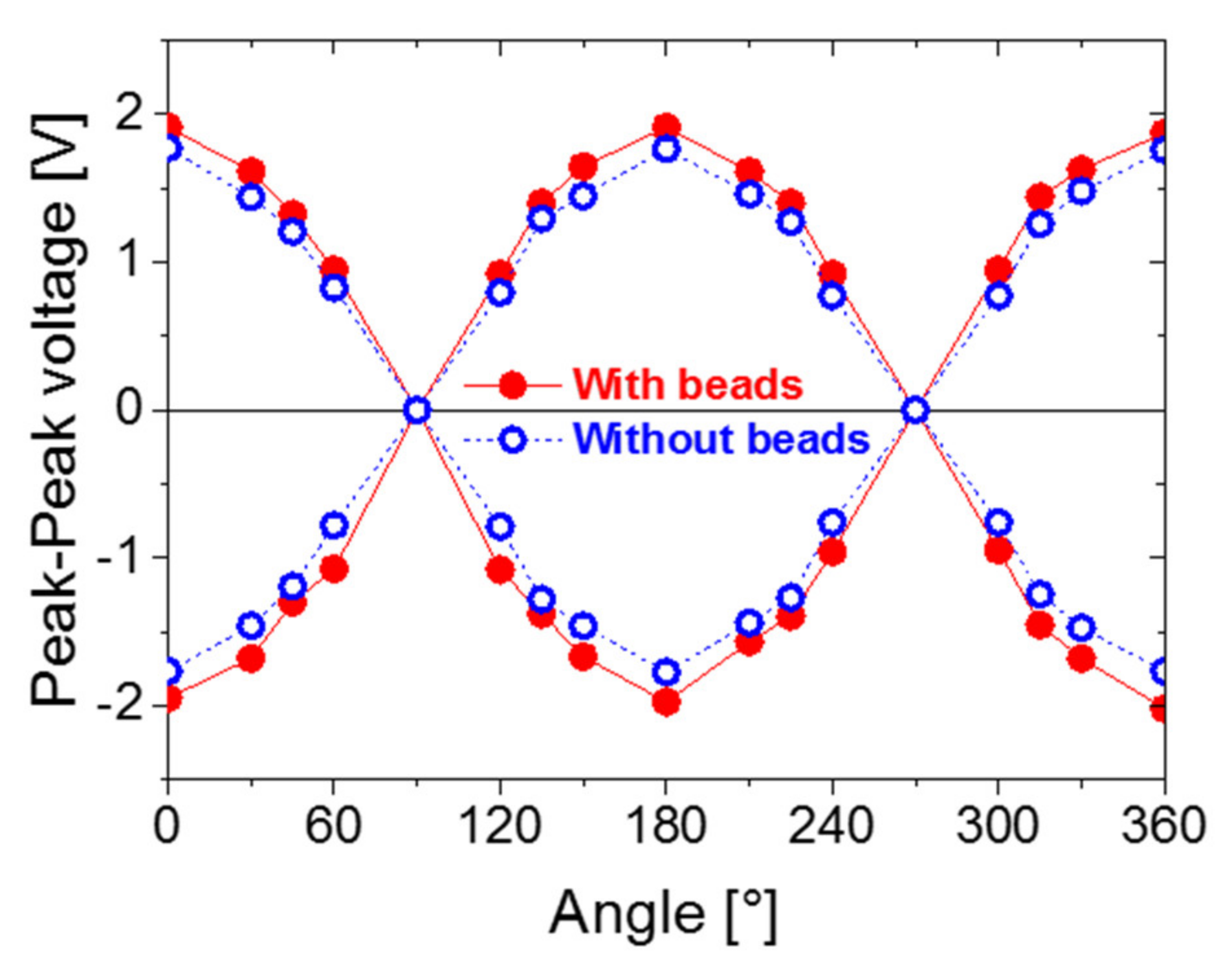