We developed and tested an unmanned aerial vehicle-based gas sampling system (UGSS) for collecting gases and atmospheric particulate matter (PM). The system applies an alternative way of collecting both vertical and horizontal transects of trace gases in order to analyze them in the laboratory. To identify the best position of the UGSS intake port, aerodynamic flow simulations and experimental verifications of propeller airflow were conducted with an unmanned aerial vehicle (UAV) in hover mode. The UGSS will automatically replace the original gas in the system with gas from a target location to avoid the original gas being stored in the air bags. Experimental results show that the UGSS needs 5 s to replace the system’s own original gas using its pump. CO2 and PM2.5/10 above the corn field are used as the test species to validate the accuracy of the CO2 gas and PM concentrations collected by UGSS. Deming regression analyses showed good agreement between the measurements from the UGSS and the ground sampling station (y = 1.027x – 11.239, Pearson’s correlation coefficient of 0.98 for CO2; y = 0.992x + 0.704, Pearson’s correlation coefficient of 0.99 for PM).The UGSS provides a measuring method that actively collects gases and PM for manual analyses in the laboratory. View Full-Text
Keywords: UAV-based gas sampling system; gas collection; gas monitoring; particulate matter; propeller airflow UAV-based gas sampling system; gas collection; gas monitoring; particulate matter; propeller airflow
►▼ Show Figures 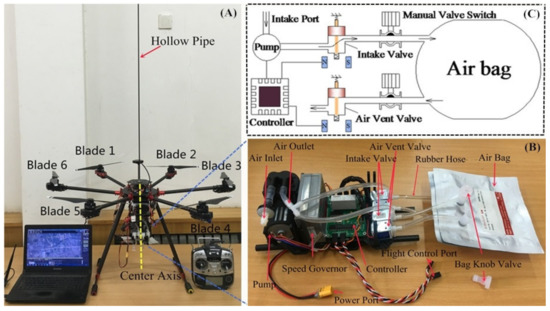