Microfabrication technologies have extensively advanced over the past decades, realizing a variety of well-designed compact devices for material synthesis, separation, analysis, monitoring, sensing, and so on. The performance of such devices has been undoubtedly improved, while it is still challenging to build up a platform by rationally combining multiple processes toward practical demands which become more diverse and complicated. Here, we present a simple and effective microfluidic system to produce and immobilize a well-defined functional material for on-chip permanganate (MnO4−) sensing. A droplet-based microfluidic approach that can continuously produce monodispersed droplets in a water-in-oil system is employed to prepare highly uniform microspheres (average size: 102 μm, coefficient of variation: 3.7%) composed of bovine serum albumin (BSA) hydrogel with autofluorescence properties in the presence of glutaraldehyde (GA). Each BSA hydrogel microsphere is subsequently immobilized in a microchannel with a hydrodynamic trapping structure to serve as an independent fluorescence unit. Various anions such as Cl−, NO3−, PO43−, Br−, BrO3−, ClO4−, SCN−, HCO3−, and MnO4− are individually flowed into the microchannel, resulting in significant fluorescence quenching only in the case of MnO4−. Linear correlation is confirmed at an MnO4− concentration from 20 to 80 μM, and a limit of detection is estimated to be 1.7 μM. Furthermore, we demonstrate the simultaneous immobilization of two kinds of different microspheres in parallel microchannels, pure BSA hydrogel microspheres and BSA hydrogel microspheres containing rhodamine B molecules, making it possible to acquire two fluorescence signals (green and yellow). The present microfluidics-based combined approach will be useful to record a fingerprint of complicated samples for sensing/identification purposes by flexibly designing the size and composition of the BSA hydrogel microspheres, immobilizing them in a desired manner and obtaining a specific pattern.
Keywords: droplet-based microfluidics; hydrodynamic trapping; BSA microspheres; autofluorescence; on-chip sensing droplet-based microfluidics; hydrodynamic trapping; BSA microspheres; autofluorescence; on-chip sensing

The ability to perform fluorescence sensing in a small-scale system such as a microfluidic chip has attracted much attention because the amount of reagents required for this purpose is tiny, making it inexpensive, less hazardous, and environmentally friendly [1,2,3]. Importantly, such a small analyte volume is also helpful for reducing background signals to achieve a high signal-to-noise ratio [4]. However, it is challenging to integrate a minute amount of conventional fluorescent reagents (e.g., dyes or quantum dots) into a microchannel in a consistent manner, precisely controlling the amount and localization, and stably immobilizing them in the microchannel for consistent device operation [5]. Generally, the immobilization of dyes or quantum dots in a microchannel is technically challenging because their size is much smaller than the channel size of a typical microfluidic device made of polydimethylsiloxane (PDMS) [6]. Thus, a practical approach to overcoming such size difference needs to be adopted. According to previous works, some forces including electric, magnetic, acoustic, and light fields have been utilized to control the motion of particles for lab-on-a-chip applications [7,8,9,10]. Furthermore, hydrodynamic trapping is known as an emerging technique and considered to be a more versatile and promising approach for integrating microscale particles in a microfluidic device. It enables placing the microparticles one by one into an arbitrary location simply on the basis of flow resistance [11]. Until now, this method has been widely used to immobilize droplets or cells, meaning that it would be beneficial to a variety of applications [12,13,14,15,16,17,18,19,20,21,22]. Taking this into account, it is conceivable that, in combination with the hydrodynamic trapping technique, developing new microscale fluorescent materials or microscale carriers for encapsulating conventional fluorescent reagents should be a key to addressing the problem of the dimensional gap.
Droplet-based microfluidics has been known for its unique ability to produce monodispersed droplets with precisely controlled size in a reproducible manner [23,24,25,26,27]. For materials engineering, each generated droplet can serve as an independent reactor and provide a reduced reaction volume compared to bulk experiments to realize fast and efficient mixing. Various materials including organic and inorganic compounds have been prepared in the droplets by dissolving precursor species into the dispersed phase in advance [28,29,30,31,32,33,34]. Among them, hydrogels have been paid great attention to in three-dimensional (3D) cell cultures and analyses because of their biocompatibility and remarkable affinity for water [35,36]. Hydrogels with an open network structure can absorb a large amount of water, making them more suitable for promoting mixing and reaction [37,38,39]. Recently, a hydrogel prepared from bovine serum albumin (BSA) has attracted widespread attention because of its low cost, facile preparation, and excellent accessibility of the ligand binding [40,41,42]. It was found that BSA hydrogel microspheres prepared through the spray-drying of glutaraldehyde (GA) cross-linked BSA showed strong autofluorescence [43]. Additionally, the same hydrogel microspheres were used to study enzymatic degradation with the assistance of the autofluorescence property [44]. Although there were some studies which focused on applications of the autofluorescent BSA hydrogel microspheres as described, no work achieved the preparation of uniform-sized autofluorescent BSA hydrogel microspheres using droplet-based microfluidics. Droplets generated by the microfluidic technique are regarded as an ideal reactor for preparing highly uniform autofluorescent BSA hydrogel microspheres.
In this paper, we introduce a facile microfluidic approach to preparing monodispersed autofluorescent BSA hydrogel microspheres and immobilize them into a microchannel for fluorescence-based on-chip sensing of MnO4−. The highly uniform autofluorescent BSA hydrogel microspheres are simply obtained via the cross-linking reaction between BSA and glutaraldehyde (GA) confined in a large number of independent droplets that are generated from a droplet-based microfluidic device. Taking advantage of the hydrodynamic trapping, we successfully place the autofluorescent BSA hydrogel microspheres into the designated locations one by one in parallel microfluidic channels. We then show that the autofluorescent BSA hydrogel microspheres in the microchannel serve as effective fluorescence sensors for sensitive and selective detection of MnO4− with a good linear range from 20 to 80 µM. Potassium permanganate (KMnO4) is a well-known strong oxidant which widely serves as a disinfectant in our daily life or is used in the treatment of pollutants in water [45,46]. However, excess MnO4− in drinking or environmental water can lead to respiratory infections and skin irritation [47,48,49]. Therefore, the content of residual MnO4− in treated water should be strictly monitored. Finally, we demonstrate the immobilization of autofluorescent BSA hydrogel microspheres loaded with/without rhodamine B molecules in parallel microchannels, realizing the simultaneous acquisition of two fluorescence signals (yellow and green).

Briefly, negative photoresist SU-8 3050 was spun onto a cleaned 3 inch single-side-polished silicon wafer through a spin-coating procedure to form a 50 µm thick layer. After baking at 95 °C for 15 min, the photoresist layer was covered with a printed photomask and then exposed to ultraviolet (UV) light. Subsequently, the mask was removed from the wafer, and the wafer was baked again at 95 °C. The master mold with microchannel structures was obtained after dissolving the uncured resist with propylene glycol monomethyl ether acetate (PGMEA). After that, the master mold was transferred onto a hot plate set at 200 °C for 5 min for stabilization. Then, a micro-molding procedure was adopted to replicate the microchannel from the master mold. The mixture (weight ratio of 10:1) of PDMS liquid with base and curing agent was poured on the SU-8 master mold followed by degassing. The cured PDMS was peeled off from the master mold after curing at 65 °C for a couple of hours. After making through-holes as inlet and outlet, the PDMS block was irreversibly bonded with a glass slide via plasma treatment. The microfluidic chip fabrication was completed after enhancing the bonding strength at 65 °C for several hours.

BSA solution (225 mg/mL) was simply obtained by dissolving BSA powder into deionized (DI) water under ultrasonication. GA solution (5 wt.%) was obtained by diluting commercial GA aqueous solution (50 wt.%) into DI water. The oil phase was HFE7500 with 2% Krytox–PEG–Krytox surfactant. All solutions were loaded into syringes, and then the syringes were connected to the microfluidic chip via needles and polyethylene tubing with an inner diameter of 0.38 mm (Scientific Commodities, Inc. Lake Havasu City, AZ, USA). The flow rates were individually controlled by pumps (PHD 2000 Infusion, Harvard Apparatus, Boston, MA, USA), and the flow was observed using an inverted microscope connected with a high-speed camera. The flow rate of two aqueous phases was set at 500 μL/h, while the flow rate of the oil phase was set at 1000 μL/h. The droplets were collected into HFE7500 covered by a small amount of silicone oil for preventing HFE7500 from evaporating and then left overnight at room temperature. The final product was directly used in the next step without any further treatment.

We synthesized highly uniform autofluorescent BSA hydrogel microspheres via a droplet microfluidic technique for the first time. The autofluorescent BSA hydrogel microspheres were immobilized into parallel microchannels via a hydrodynamic trapping technique, resulting in multiple independent microsphere arrays. The entire immobilization process was easily controlled as a function of flow resistance. The autofluorescent BSA microspheres remained in the preset detection position even after multiple drying–swelling cycles with air and water injection. Each microsphere served as a fluorescence sensing unit for MnO4− with high sensitivity and selectivity. Our entire design has made significant progress compared to previous approaches in several aspects. First, since the opening of a capture port is parallel to the flow direction and each particle must pass through the capture structure, nearly 100% capture rate is achieved. Second, multiple flow channels are arranged in parallel to achieve high throughput and make the detection more efficient. Our structure is also simpler and more compact. Third, multiple detection results under the same conditions can be obtained from a single operation, making the detection results more reliable and accurate. Lastly, we also realized simultaneous acquisition of two fluorescence signals (yellow and green) by trapping the autofluorescent BSA hydrogel microspheres loaded with/without rhodamine B molecules in parallel microchannels. Two kinds of microspheres with different fluorescence emissions in parallel microchannels have potential applications in the construction of sensors as a function of fluorescence intensity ratio or simultaneous detection of multiple substances. Immobilizing a wider variety of microspheres in a microchannel will display a unique pattern which is a fingerprint of analytes, leading to the detection/identification of complicated samples such as body fluids.

This work was supported by JSPS KAKENHI Grant Number JP19KK0141, MEXT, Japan, the Telecommunications Advancement Foundation, Japan, and the Marubun Research Promotion Foundation, Japan. Kota Shiba expresses sincere gratitude to the National Institute for Materials Science for the financial support to conduct the present work at Harvard University. Linbo Liu and Guangming Li would like to acknowledge the scholarships from China Scholarship Council (201806090024 and 201806340023). 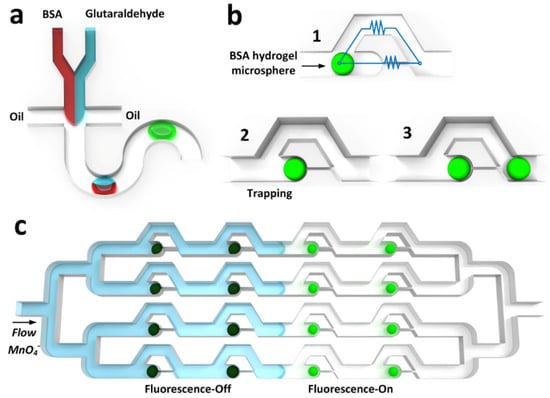 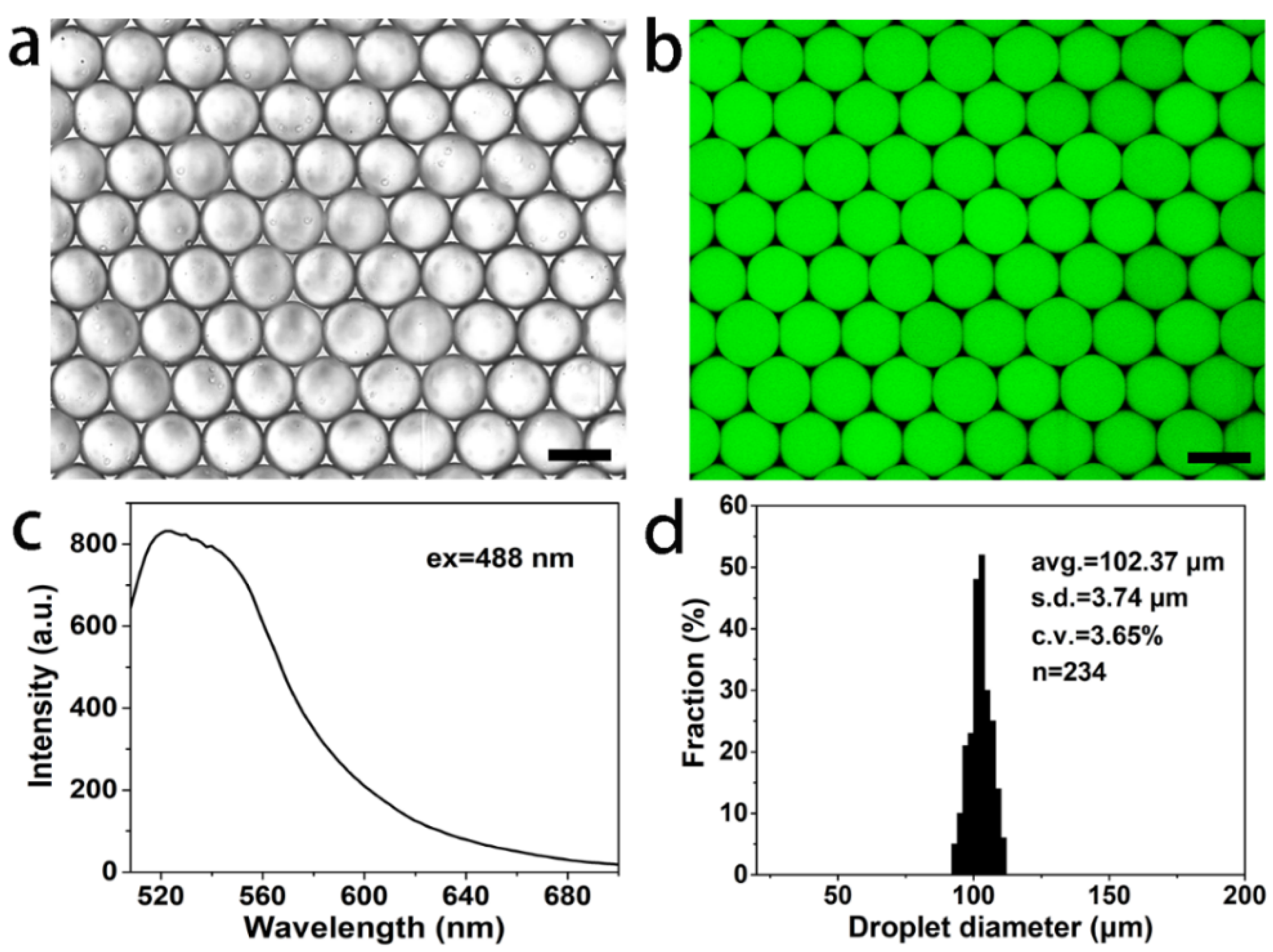